I was sitting in the dentist’s chair today thinking about the word piqûre as the needle sank slowly and painlessly into my gums (that is why I am willing to go across Paris to see my dentist!). Although injection is the correct term, it is very rarely used. 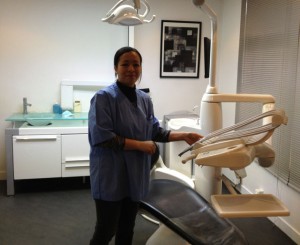 Piqûre comes from the verb piquer from the low Latin pikkare  (1306) meaning to prick and exists in all the Romance languages except Romanian, which is quite astonishing. In English, we can call an injection a “shot” or “jab” but they are much more informal than piqûre.

A few examples of the way in which piqûre is used:

Piqûre can also have an entirely different meaning – a mosquito or insect bite or a bee or nettle sting. It’s funny that English should be so precise, isn’t it? The mosquito actually bites us like a dog and the bee stings us like a nettle.

A pinprick is a piqûre d’épingle while the actual hole formed when the needle goes into the skin is a piqûre as well.

Interestingly, piquer doesn’t only mean prick – it also means to sew or stitch; the result – the line of stitching – is also a piqûre. Piquer à la machine is to machine stitch. If someone asks me “Sais-tu piquer à la machine” they are asking if I know how to use a sewing machine (which I do).

There are lots of other expressions using piquer. I’m sure you can suggest a few!