What Language Do You Dream In?

Posted on February 1, 2012 by Rosemary Kneipp 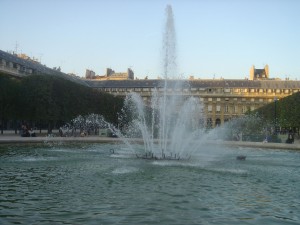 Sometimes people ask me what language I dream in. I’m not sure that I really dream in any language but I guess it depends on what the dream’s about.  I’m a translator by trade and when you’re working with two languages all day, you don’t necessarily know which one you’re speaking, let alone dreaming. I can remember once being asked by the tax department to come and fix up my GST  cheque which contained an error. I went in and looked at the cheque carefully for a few minutes but still couldn’t see what the problem was. They pointed out that the amount was written half in English and half in French!

When I chose to leave Australia and live in France, I didn’t really know what I was going to. I only knew what I was leaving. I’ve never looked back and never been homesick. That doesn’t mean that I don’t miss my family. I do, especially now that I have four nephews in Australia. But I love living in France. One of the things I like best is that you have greater freedom to be yourself when you live in another country and speak another language. You’re not bound by the same traditions and restrictions. To start off with, you don’t necessarily know that you’re doing something different.

I don’t mean that I want to be outrageous. I just want to be able to act spontaneously without having to worry about what other people say. Once I was in Townsville in the summer and was wearing a fuschia-coloured dress. I was told that it was not a summer colour and that I shouldn’t wear it! I was told in France that I had could only serve rice or potatoes with fish and that rice was never served with red meat, only with veal.  In a meeting or a class in France, you’re supposed to put your hand up when you want to talk. None of this spontaneous discussion that goes on in Australia. But I’ve noticed in staff meetings now that some of my French colleagues are following my example.

Expressing emotion is very different here. If something goes wrong, everybody gets excited about it. They drop everything else they’re doing and try to solve the problem together. Leonardo who’s just moved to Australia was telling me about an incident in his first job there. A problem occurred and his team was supposed to be looking after it. Two hours later, the boss called them in and got very angry because they hadn’t found a solution. Leonardo didn’t even know there was a problem. He was mystified because he hadn’t felt any vibes despite the fact that he was working in the same room as the other people involved.

Yet, at the same time, people never interfere in other people’s lives. I once hadn’t seen my neighbour for several days yet her cat seemed to be prowling around. Since she was depressive, I was worried. I went to see the real estate agent who was selling her flat and he came and checked there was nothing wrong. As it turned out, she’d just gone away for a few days. Relationnel thought I was interfering but I was relieved to know nothing had happened to her.

Another thing I like is that when there are differences in customs and attitudes, you ask yourself why. And that must surely help you gain a better understanding of people and life in general. It certainly makes you more tolerant and open-minded. Some traditions were developed for reasons that are still valid today, while others no longer make any sense. When you have the experience of two different cultures, you can choose the best of both worlds!

This entry was posted in Australia, France, Lifestyle. Bookmark the permalink.