Gardens I Have Known 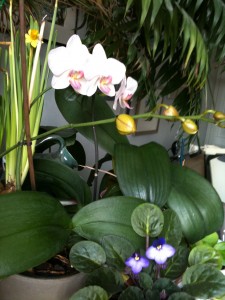 I spent my first 9 years in France living in a flat and biding my time until I could have a house and a garden again. It finally became a reality when I was pregnant with Black Cat and Leonardo was nearly 2 1/2. It was a funny sort of a garden, 10 metres wide by 30 metres long, but typical of the area which used to have a lot of orchards with espalier pear trees. I was into organic food then and we grew apples, hazelnuts, black currants, red currants, tomatoes, strawberries and, best of all, raspberries which the kids loved to pick for dessert. We also had the most wonderful old style rose bushes with the most divine scent. 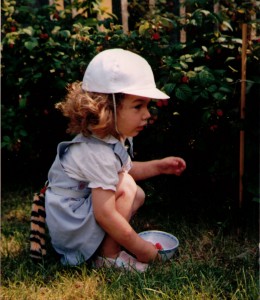 Before I had my own roses, I didn’t particularly like them but the garden had an enormous variety and I took immense pleasure in picking them to give to my friends who didn’t have gardens. There was a lovely yellow one which started out pink and a red rose whose petals felt like velvet. I was so sad when we grew a hedge of thuya bushes for privacy and it crowded out most of the roses. We realised the damage too late. 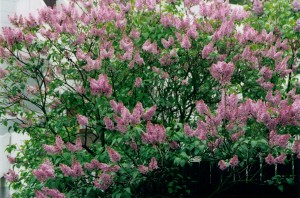 When I divorced, I had to give up my garden but I was lucky enough to find a ground floor flat with a small garden that we gradually turned into a mass of flowers. We had trumpet creepers and clematis, hollyhocks and azaleas, columbines and delphiniums, irises and forsythias and even a lilac bush, all of which would all suddenly appear after winter. Every year in November we’d plant lots of tulips, jonquils and hyacinths, tiny pansies and cyclamens. We had lilies of the valley for May Day as well. 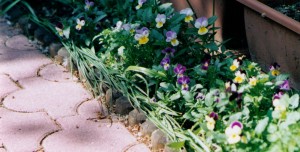 In the summer, we’d plant masses of busy lizzies, geraniums and nastursiums. Our hanging pots were filled with petunias and begonias. Just thinking about it makes me nostalgic! Then we moved to our apartment in Paris overlooking the Palais Royal gardens. We couldn’t even have window boxes at first because it’s a listed monument. But I finally convinced Relationnel into letting me have planters on the sills of the French windows that you can’t see from the other side. 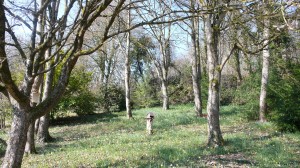 So you can imagine how much I’m looking forward to our new house in Blois. I can’t wait to see the shrubs come into flower and discover all the different species in the garden. The little wood at the back is full of daffodils and primroses and even tiny ground orchids. I know there are hollyhocks because I’ve seen the leaves but no one has mentioned any columbines or delphiniums. There’s a climbing rose on the front stairs but it looks a little lonely so I’ll have to see what company I can find. And I can’t wait for the wisteria to bloom in April!