May Day in Blois 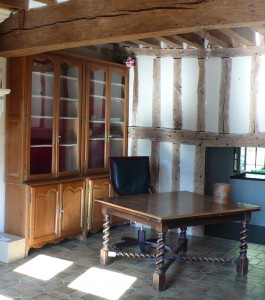 Yesterday was the first time I spent May Day in Blois. It was a good day. I woke up alive for the 3rd day running since I smashed my head into a very low authentic Renaissance beam at Closerie Falaiseau that you are supposed to duck under to go into one of the rooms. The people were on the short side back in those days! It felt as though I had a huge weight on my head and I did wonder for a few days whether it hadn’t been damaged forever. But it seems that I have survived! 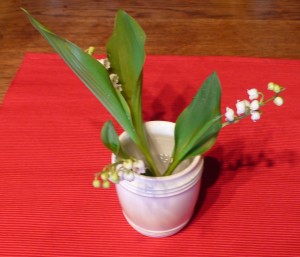 While we were having breakfast, Relationnel suddenly got up, put his cap on and left. I was a bit put out until he came back a few minutes later with three little sprigs of muguet from the garden of our “little house”. It’s the tradition in France to give lily-of-the-valley on 1st May for good luck, especially to your loved ones. You can find it on practically every street corner, mainly sold by charities and similar associations. And because it’s Labour Day, it’s also the one day of the year when anyone can sell on the street without a permit in France.

Then we set out for the annual Chambord “brocante” or “vide-grenier” as they call it (attic emptier), the largest in the region, whom Madame Previous Owner  had told me about a long time ago, warning me that we should be there by 7 am! Since we didn’t even wake up until 10.30 am, it was considerably later by the time we left. On the way, we saw a sign for another “vide-grenier” at Maslives so I insisted we stop. 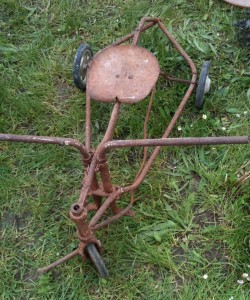 It was very much a local edition, where most of the people obviously knew each other. We wandered around in the wet grass, delighted that we had had the foresight to change into our walking boots. I saw the most amazing child’s tricycle with long handlebars to turn to make it go. Relationnel spied out a  lampshade made of pig’s bladder on top of the most hideous lamp stand imagineable so we paid the full price and left the lamp explaining to the vendor that we wouldn’t be able to use it.  He commisserated saying that he had inherited it from his mother and didn’t have room either – but didn’t bring the price down! 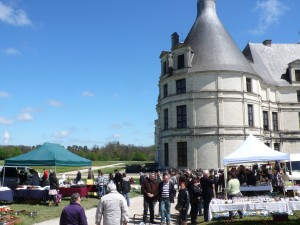 We continued on to Chambord. You could tell from the gendarmes everywhere that it was not on the same scale. We parked, as directed, in a large field and were thankful, once again, that we were wearing our boots. By then, the sun had come out for the first time in 4 days, and we had a lovely time exploring the endless rows of stalls with the majestic Château de Chambord as a backdrop. The prices, however, were much higher, and we didn’t find anything to our liking. 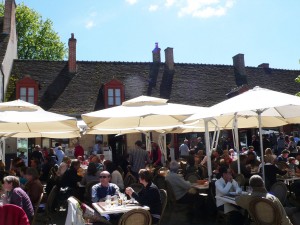 At about 2.30, we decided to have lunch at one of the two restaurants in the castle grounds – Le Saint-Louis – which had both reasonable prices (about 12 euros for a salad) and friendly service. We’d done enough brocanting by then and went home to change into our cycling gear. It was great to be able to ride out the gate and down our country road. Not exactly possible in Paris! 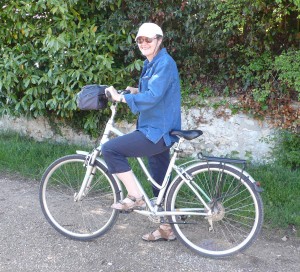 After cycling along a dirt road and through a few puddles, we reached bitumen again, to my relief. We then rode up a very manageable slope to the highest point of Blois which means we’ll be able to cycle into the city centre in the future without too much effort. On the way, my chain came off  and I thought I should learn how to put it back on by myself for when I go cycling without Relationnel. Newfound independence! 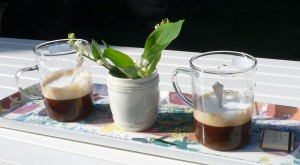 When we got home, we attacked the expresso machine again and finally made our first cappuccino!  It was excellent (the coffee came from Verlet, I might add, and was accompanied by chocolates from Anglina’s). And despite the fast-descending temperature, we decided to dine al fresco for the very first time in Blois!

9 Responses to May Day in Blois