We are halfway through the Saturday market (you can read #1 here) and having our coffee, waiting to hear about the Chambord second-hand and antique fair on May 1st from a lady who was an exhibitor. 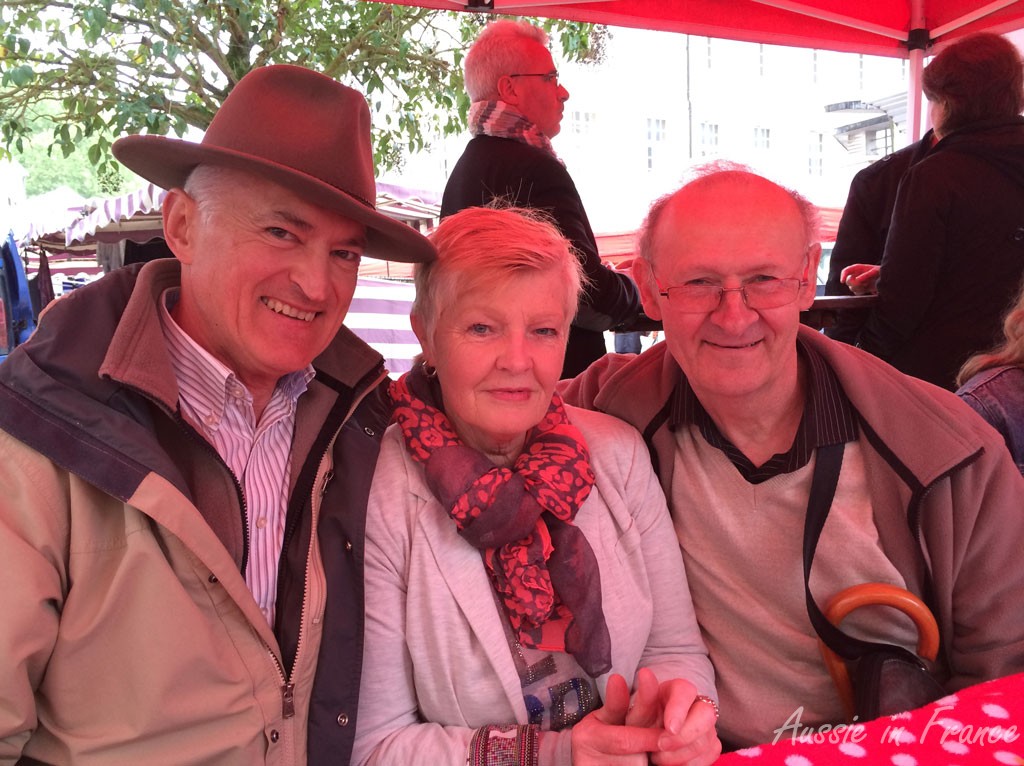 Jean Michel and the Chambord vendor

“I slept the night in my car”, she explains. “It was very cold – it rained all night. The first buyers turned up at 4.30 am. I wasn’t even up ! (Who’s to blame her ?). During the day, it was so wet, I changed three times”, she adds. “I don’t understand why anyone would come on such an awful day. The ground was completely soaked.” When the friend on her left asks how much  money she made, she replies “About 150 euro. I usually make 800 to 1000 euro at Chambord.” 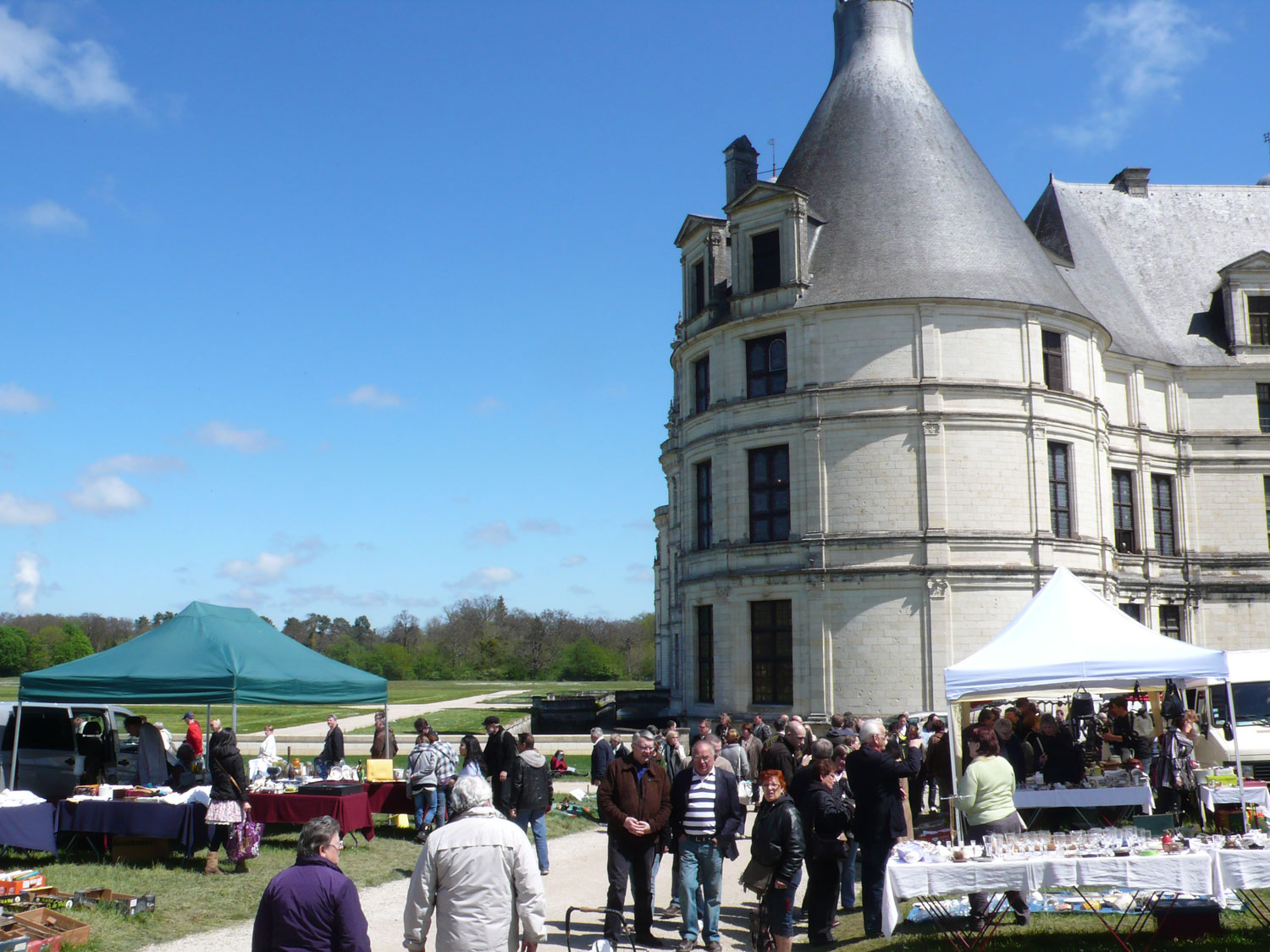 The brocante in Chambord two years ago on a perfect day

We were lucky when we went three years ago at the suggestion of Mr and Mrs Previous Owner. It was a beautiful sunny day and the place was absolutely crowded.

We’ve finished our coffee and the story’s over so we move on, after being invited to attend two forthcoming brocantes, one combined with the local horticulture school’s annual exhibition. We’ll definitely be going to that one ! Let’s hope the weather is better … 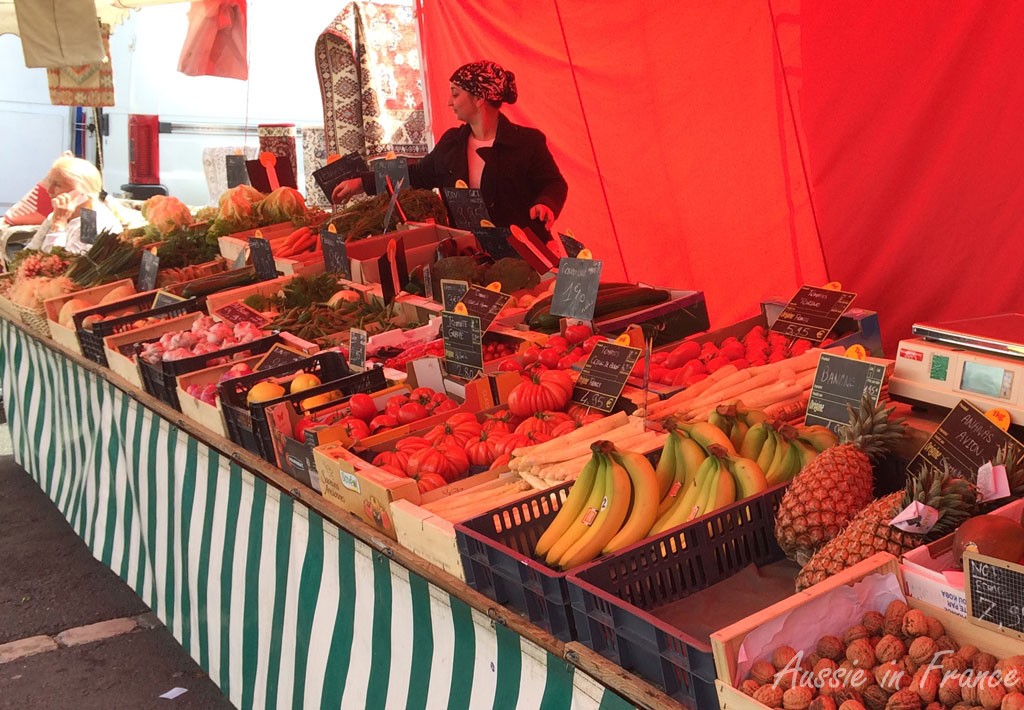 The Turkish fruit and vegetable stall

Our next stop is a Turkish couple who sell good quality fruit and vegetables. Initially we didn’t get much of a smile from Madame but now that we have become regulars, she has opened up. Her husband loves a good joke and sometimes joins us for coffee. They own a grocery store in Vendôme. 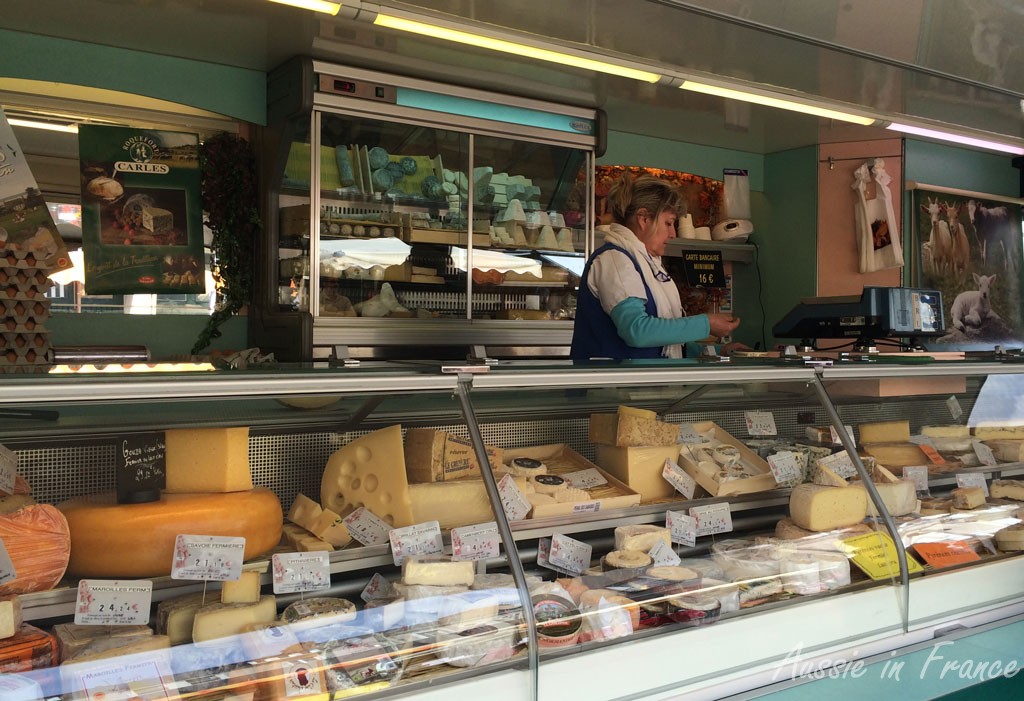 Next comes the cheese monger. We buy a selection of cheeses about every three weeks and have a cheese meal once a week.  We’d much rather do it that way than just have a little bit at a time. The French custom of having cheese at every meal is gradually dying out because of the high calorie content and lack of physical activity. We have a large bowl of lettuce and a piece of fruit to follow.

The honey vendor just opposite has a wide selection of local honey. 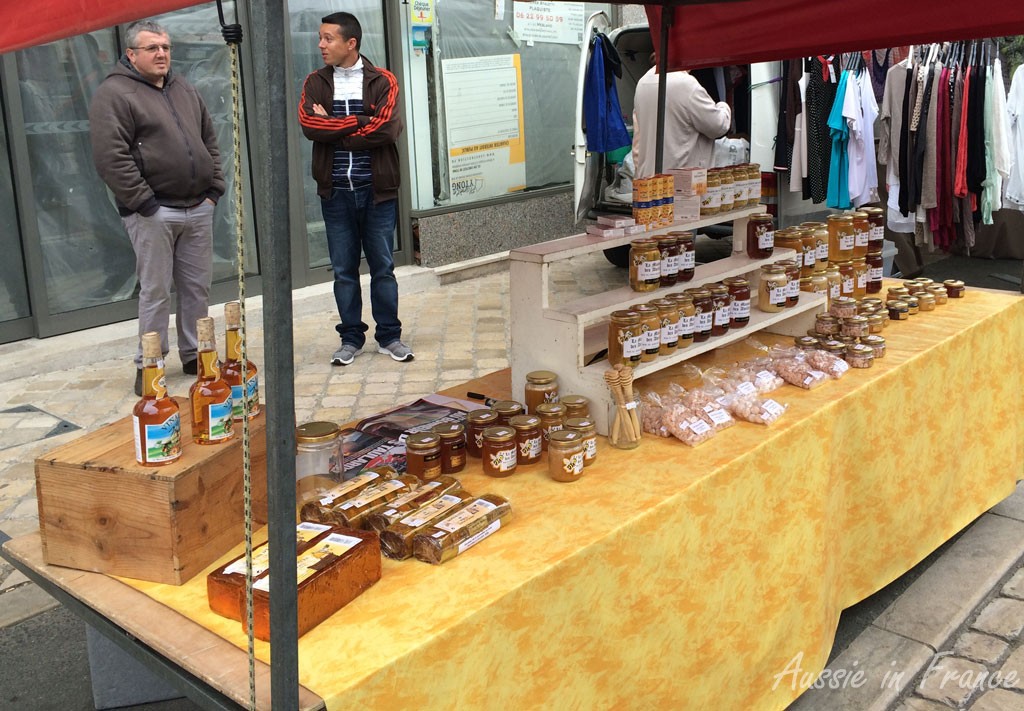 The fishmonger is next in line and there is often a queue. We buy fresh mackerel whenever we can (an oily fish in Europe unlike the Australian fish of the same name) and cook them whole. I usually buy several pieces of wild salmon at a time and freeze them. There are three fishmongers at the market but we’re not really satisfied with any of them, unlike the market we went to in Paris which had a wide variety of freshly caught fish at reasonable prices. 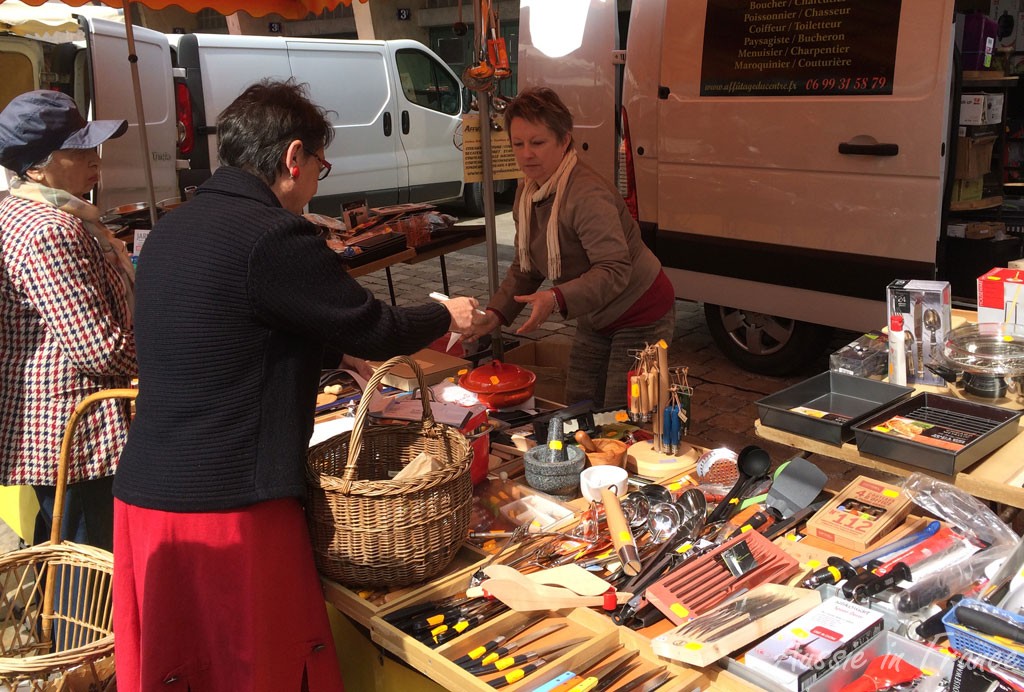 The kitchen stall. Imagine packing and unpacking it all every time!

The kitchen stall a little further along is where we buy our kitchen knives and vegetable peelers which disappear mysteriously from time to time. Jean Michel is convinced that when he next adds the compost to the vegetable garden, it’s going to be full of knives.  We can also have our knives and scissors sharpened although a knife grinder turned up at the market recently with a very neat outfit indeed. 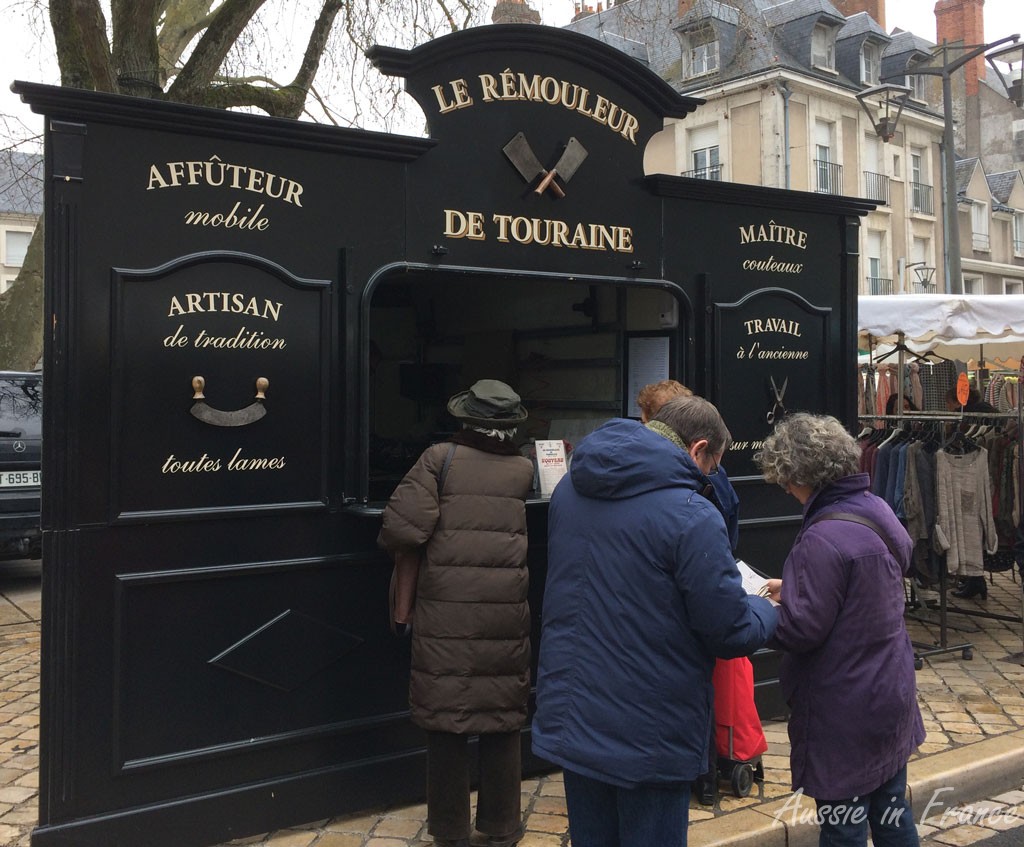 Depending on the season, we might then find a stall just selling asparagus, artichokes or strawberries all of which are local specialities. 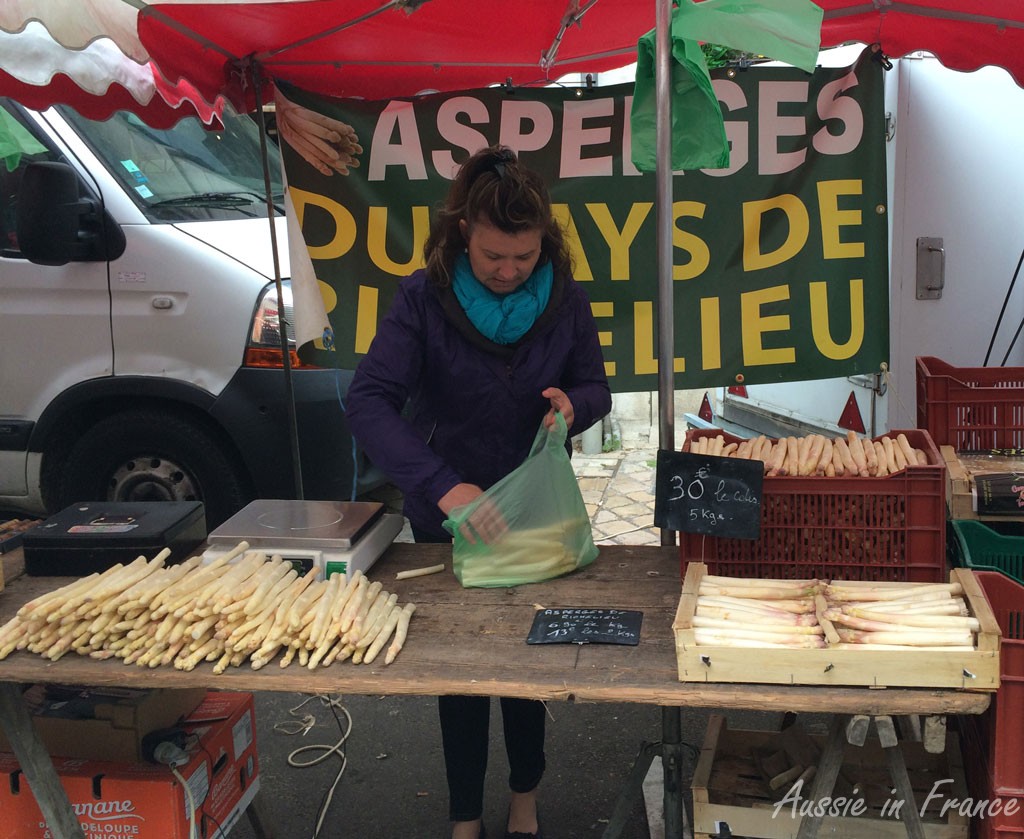 We never miss having a chat with Damien, our local biscuit maker. He is quite passionate about his trade and is always trying out new recipes. He seems to know half the people in Blois as well and entertains us with the local gossip. 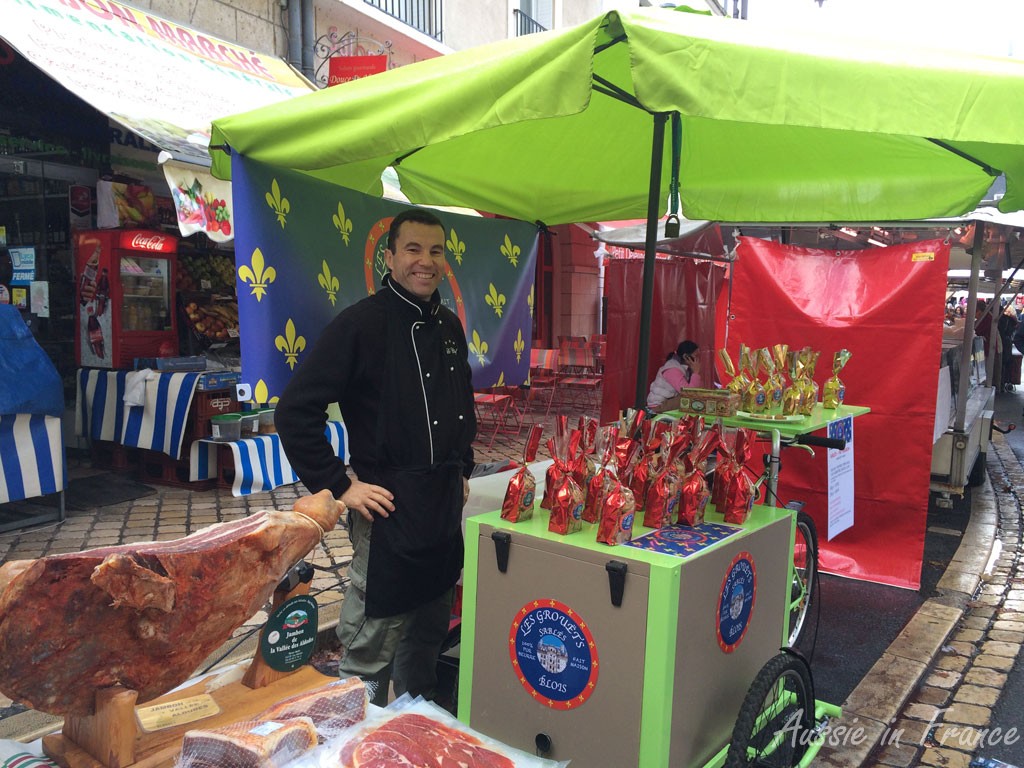 Damien and his Les Grouets biscuits

The last on the list is a man who sells fruit and vegetables grown by local producers. I sometimes go by his stall at the beginning of the market to see what he’s selling so that I don’t double up at the other stalls.

So those are are regular stalls, but there are plenty of others who are either permanent or come and go according to the  season. And you never know what else might be going on as well. Today, for instance, there were folk dancers teaching the locals! Would you have joined in?

This entry was posted in Blois, Food and tagged saturday market in blois. Bookmark the permalink.