A Restaurant with a View of the Seine 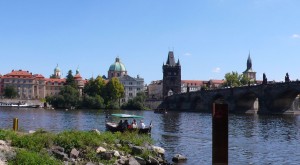 In Paris, there are not many restaurants with a view of the Seine, unlike Prague, for example, where you can sit right next to the river. Priority goes to the cars here! But there’s a big project underway to do something about it. In the meantime, we decided to try out a restaurant with a panoramic view of the river. We had to drive for about an hour from the centre of Paris to a town called Rolleboise in the western suburbs, not far from Giverny, nothing spectacular in itself, but there is a hotel with a restaurant up on the hill called Domaine de la Corniche. 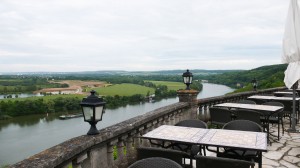 We booked a couple of weeks ago for our wedding anniversary in the hope that the weather would be fine. Of course, last week would have been ideal, but you can’t choose dates, can you? Black Cat reminded me that on the Big Day 14 years ago, it rained as well. Just during the apéritif fortunately and we had a marquis so didn’t get wet! But the kids’ new shoes were totally damaged from running around in the wet grass afterwards!

It was overcast when we got to the restaurant last night but we could still appreciate the panoramic view of the Seine from inside the dining room and the sun quite suddenly came out after an hour or so and cast a wonderful light over the valley below. 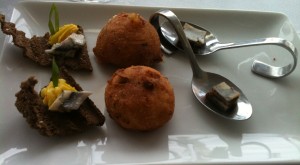 We appreciated the friendly service and the food even though I didn’t think there was a big choice. I was disappointed in the “amuse-bouches” which I thought were a bit dull even though they were beautifully presented. In fact, the presentation of the different foods was probably one of the highlights of the meal. Each dish was prepared with considerable artistic flare. Even the cutlery was original (though I must confess not very pratical!). I chose 2 different coloured tomatoes and mozarella as an entrée, mainly because I wasn’t attracted by any of the other choices. Relationnel took the poultry gallantine. 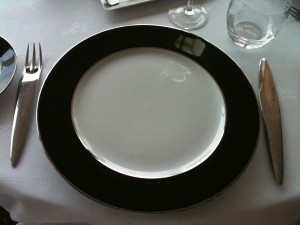 But I had underestimated the chef, Vakhtang Meliava. My entrée consisted of red and green tomatoes with two white puff affairs which turned out to be a delicious mozarella mousse. Relationnel’s gallantine with cep mushrooms (we swapped plates halfway through) was very tasty as well. I followed with the extremely tender veal (called quasi-veau!) and spring vegetables while Relationnel had the maigre (meagre), an unappetizing name for a fish, you must admit. For dessert, I had a green tea mousse with verbena sorbet and Relationnel had a very pretty strawberry and raspberry dessert. 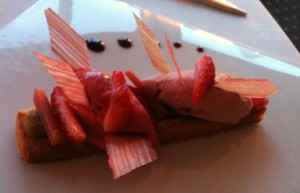 We started with champagne and then chose the “tasting duo” selected by the wine waiter to match our choice of dishes. He let us taste the wine first before he told us what it was. I haven’t posted much on wine but we are actually wine buffs from way back. We started with a series of wine tasting courses soon after we met 16 years ago and have since spent many wonderful holidays, mainly in France, going from vineyard to vineyard and adding to our collection of wine. We’ve slowed down in recent years because we’ve run out of room in the cellar and have reduced our wine consumption. 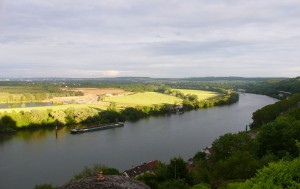 View when the sun came out

However, I was extremely proud of myself last night because I was able to identify three of the wines (the grapes anyway!). I had a Saint Bris sauvignon which comes from a village near Auxerre in Burgundy where the whites are usually chardonnays. Relationnel had a half-sweet chenin blanc from the Loire (Domaine de la Paleine “Traviata”) that we have never tasted before. After that, I had a 100% syrah (shiraz) from Minervois while Relationnel had a red burgundy. He had to ruefully admit to the very friendly and helpful sommelier that he had got them all wrong! As he pointed out though, he’s still better than me at finding and identifying mushrooms …

6 Responses to A Restaurant with a View of the Seine