My highschool friend Jane is staying with me in Blois for a few days. It’s quite hot so we’ve decided to cycle late afternoon and dine out. Jane has been cycling in Townsville along the Ross River in preparation for her visit and the day before, we’ve already ridden along the Loire from Château Menars to Saint Dyé sur Loire and back, a comfortable 16 K. 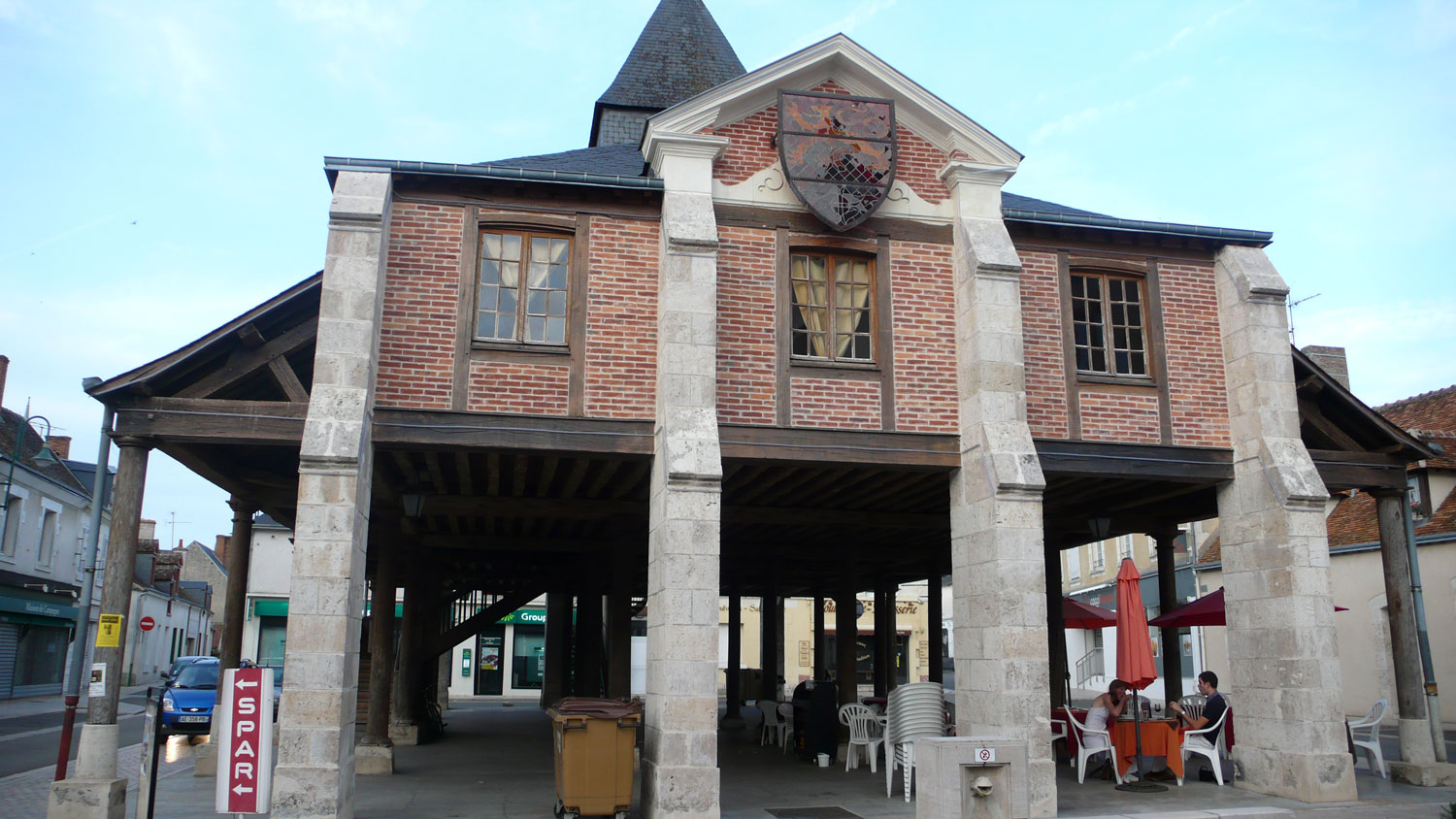 I’ve checked my bike map, Les Châteaux à Vélo, and seen that Bracieux to Chambord is about 8 K, which is perfect. I know the route because I’ve cycled on it before. You may remember that Bracieux is the little town where Relationnel and I were recently dubbed “cute” by one of the locals. We arrive in Bracieux without mishap and take the bikes off the back of the car. We’re organised by now and have everything we need, including our rain capes because there are a few blackish clouds floating around. 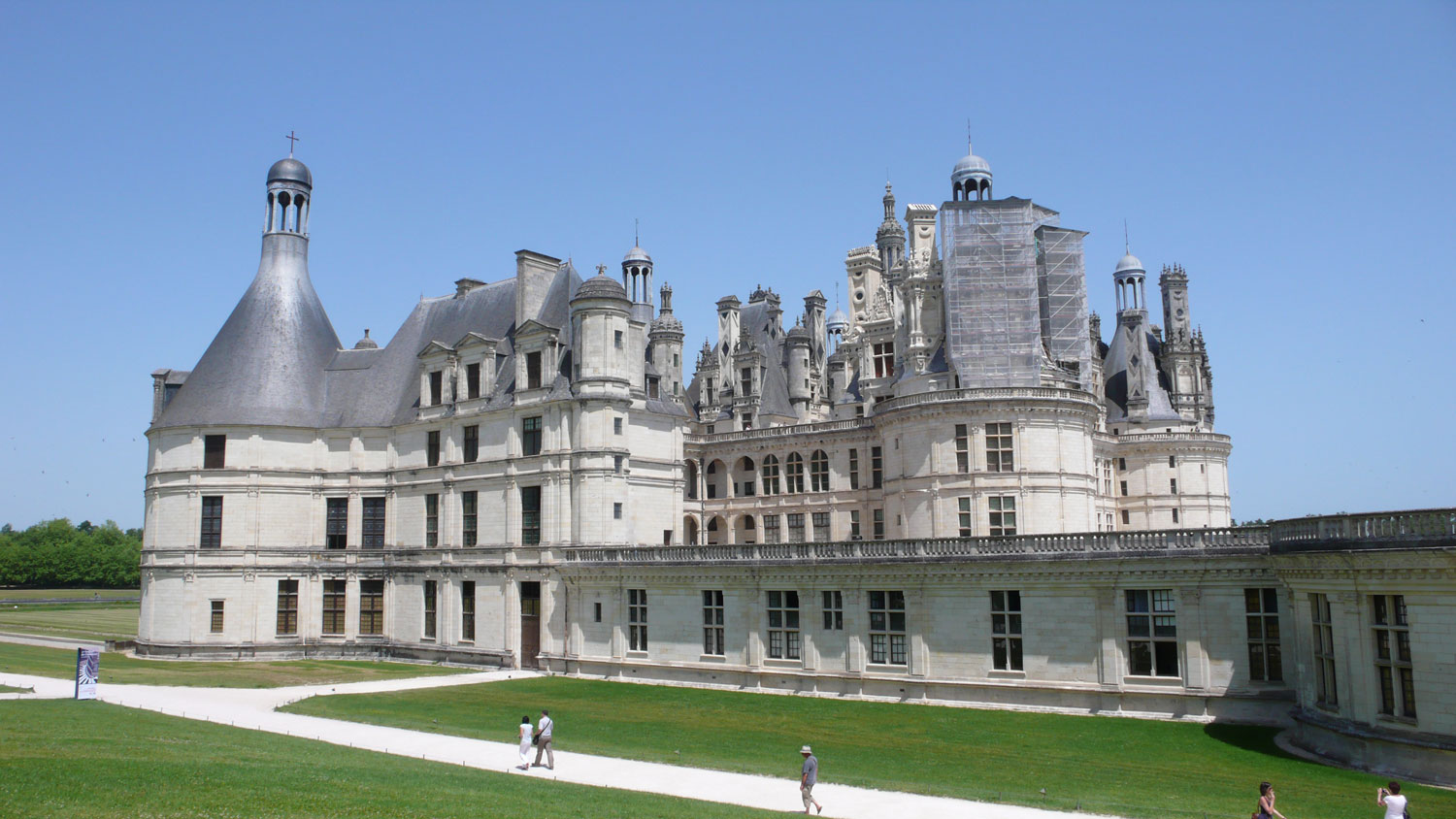 Chambord in the sun, taken during a previous ride

We ride into the town and check out the 17th century market place. We see that the restaurant on the corner “Au Fil du Temps” is open because the tables under the market place are already set. Off we go and I realise that I don’t know where the bike route is. I hate to admit this, but when I’m with Relationnel, I leave that sort of thing to him. We head off in what seems a likely direction and eventually find a little bike sign saying “Chambord”.
“I guess it’s because we already went cycling yesterday”, says Jane after about 5 k, “but it doesn’t seem as easy today”. “Don’t worry”, I reply, “only about 3 K to go”. But we arrive in a town that I don’t remember seeing before called Neuvy. It’s a bit worrying because I can’t see it on my map either. Some other cyclists tell us they’ve just come from Chambord. 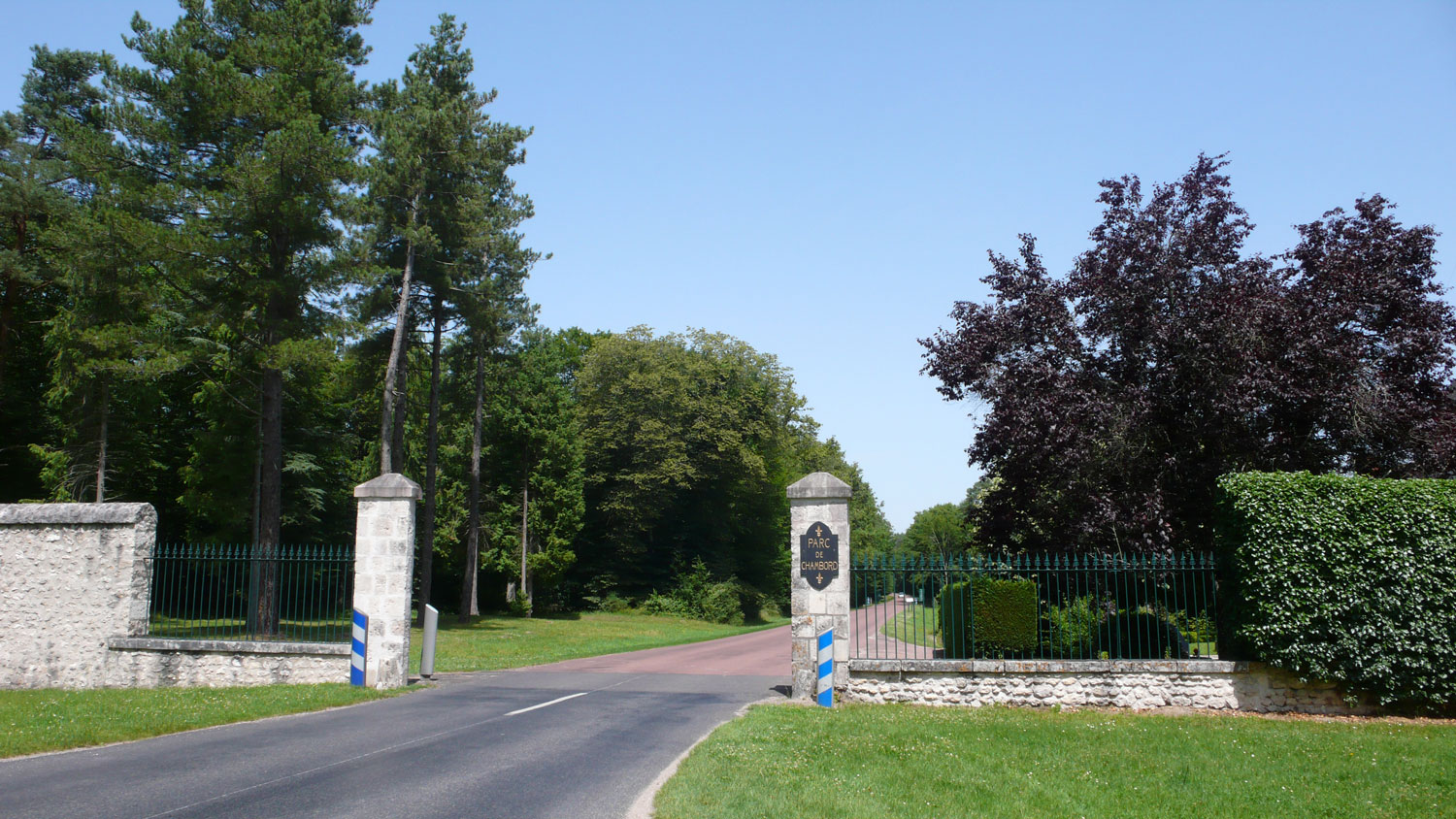 Entrance to the grounds of Chambord

I see a sign that says 11 K. Oops ! We find a street map and discover that we must have missed a turnoff early in the procedure and have been going east instead of north.
Jane looks very discouraged. We head off in the right direction this time, along a forest road, and when we get to the crossroads between Chambord (5 K) and Bracieux (3 K), she decides that we may as well push on to Chambord after coming all this way. We finally get to the stone wall surrounding the castle and enclosing what was François Ier’s favourite hunting domain. No one ever lived in Chambord – he used to travel with everything and everyone he needed, including furniture. 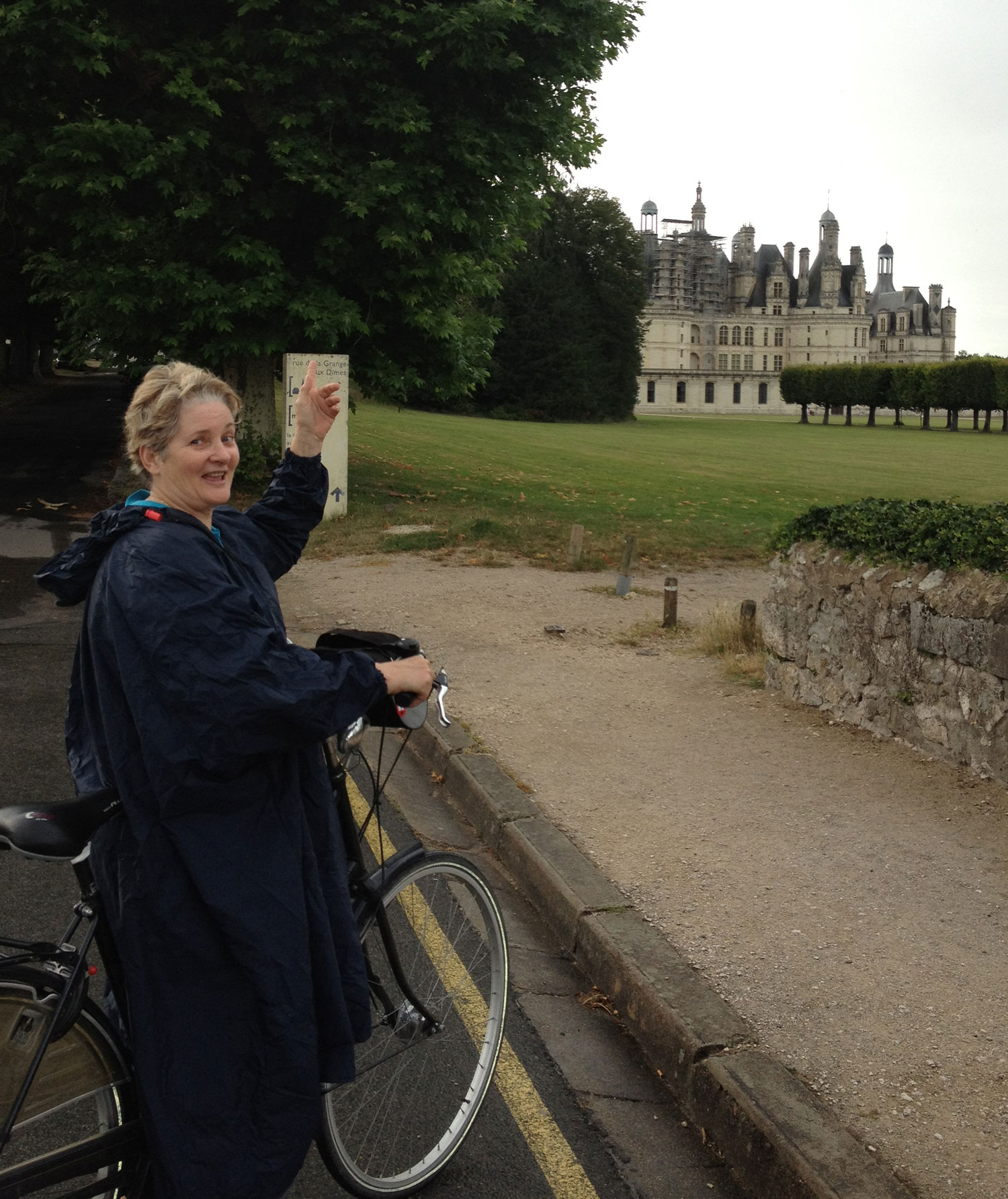 I miss the cycle route (again!) so we join it a little further on, which seems preferable to cycling along the edge of a 70 kph road. Now it’s spitting. We come out just before the château and as we round the corner, the view is breathtaking. We put on our capes but the sun then comes out and casts a wonderful light on the castle. We cycle through the grounds, past the château and finally stop and have a cold drink at a café with the castle in full view, just as everyone is packing up. By then it’s 7.45 pm but it’s still full daylight. 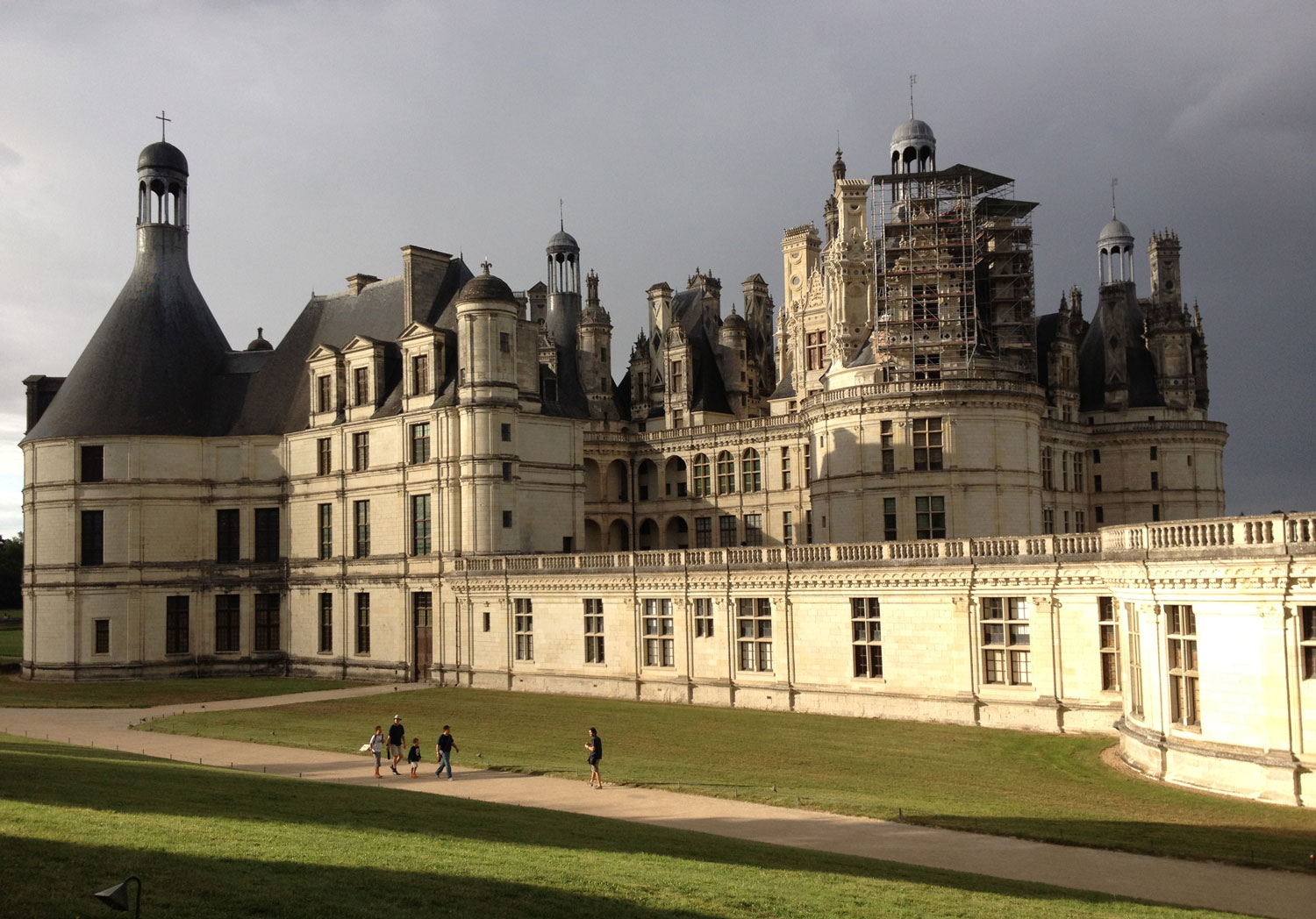 After a suitable rest, we go back along the 8 K route we were originally supposed to take! By the time we arrive back in Bracieux, we’ve ridden 30 K and Jane is understandably very proud of herself as 16 K is her record. We decide to have the full menu for 26 euro at Au Fil du Temps. There isn’t a wide choice, but the entrée (melon for Jane, smoked salmon for me) and main course (fresh salmon for Jane and entrecôte for me) are good value for money. The tarte tatin is somewhat disappointing. The service is friendly, however, and the setting is definitely worth it!

11 Responses to Cycling in the Loire – Château de Chambord