Many of the Anglophone bloggers who live in France are off on their summer holidays at the moment, often taking a break from blogging, which has given me the chance to discover some new blogs, in particular that of Gaynor B. from La Petite Presse who spends the summer in the Loire Valley. She takes us to a very enticing restaurant called La Promenade. This time, Experience France by Bike gives an exhaustive explanation of the bike route that connects up Paris and Le Mont Saint Michel – a mere 442 k!  Bread is Pain explains how, if you live in France, you can blame everything negative that ever happens to you on that very fact and not take any responsibility for anything you do! Enjoy!

by Gaynor B. from La Petite Presse who divides her time between the UK and the small village of Le Petit-Pressigny in the Touraine Sud area of France 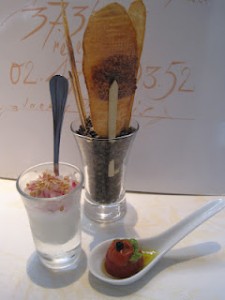 We seem to have a ‘nose’ for picking homes in small villages with excellent places to eat. In Staffordshire it is the Hollybush, and in Le Petit-Pressigny La Promenade and Le Bon Coin. Different in price and ambiance but each offering good quality food. Last week we ate at La Promenade which is a Michelin starred restaurant run by Jacky Dallais. The food was fantastic and the wines of excellent quality and value. We’ve eaten here before and really think that it is an experience to savour and better shared with other people. Our partners in the gourmet experience this time were Maureen, John and their son Daniel (who live near to us in the UK and have a lovely home and gite near Chatillion sur Indre) together with Nick and Janet. Read more. 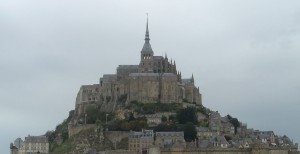 If there are any more long-distance bike routes developed in France, I am definitely going to need to relocate so that I have more time to explore all of them!  This summer has already seen the grand opening of La Velodyssee, the Atlantic Coast route which I wrote about for 2 weeks in May. Now, the much talked about Paris-Mont-Saint-Michel route has introduced a new name, a new website, and significant improvements to the route. The new website for La Veloscenie is only in French, good for my French readers, but not for the rest of us.  So here are some key details about this itinerary in case you want to consider it for a future trip. Read more

by Bread is Pain, a 30-something American living in the Rhone-Alps, and slowly eating and drinking herself through the country

“Does this ever happen to you?”

Queue photos of a woman carrying a grocery bag that breaks, a man having a car splash water on him, a couple having the doors to a theater shut in their face.

“Do you ever feel like you just want to throw in the towel, like the world just isn’t on your side?”

Show image of unattractive depressed person looking out a window on a rainy day.

“What if you could change all that?  What if I told you that there is a way that you could never have a bad day again and nothing will ever be your fault?”

The word “HOPE” flashes across the screen. Read more.