The Fireplace is Not Finished

The fireplace is not finished. Relationnel has gone back to Paris without me because the balcony in the Palais Royal is not finished either. We will not be welcoming in the New Year with a glass of champagne and homemade foie gras in front of a blazing fire. Unless we postpone New Year until the fireplace is finished. Which is what I think we might do. It might be less depressing. 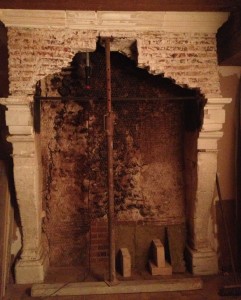 You may remember that the last time Relationnel left Closerie Falaiseau, the back of the fireplace was lined with chicken wire, waiting to be covered with refractory mortar. Given the slow progress up until then, he decided to take a week’s holiday so that he could finish it completely. I was so pleased to have him back again after 10 days that I immediately offered to help with the mortar.

I got dressed in my coveralls, shoe covers and surgeon’s gloves while Relationnel got the mortar ready. None of this measuring bit. He just tipped the powder into a trough and then added water au pif, as the French say (pif is slang for nose). He mixed it round and it eventually had the right consistency. It looked deceptively easy. 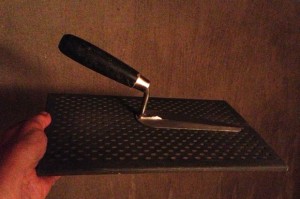 Then he demonstrated how you hold up a large trowel at right angles to the wall, then with your other hand, you use a smaller trowel to somehow push the mortar onto the wall and flatten it on over the chicken wire. Ten minutes of that had me in tears. Not only didn’t my mortar stick but my whole body was hurting. 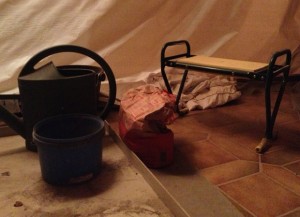 My gardening stool for time out

I put my trowel down and went over to have some time out on my gardening stool for a while. I watched Relationnel and tried to learn his technique. The first thing I realised was that he had shown me the technique for right handers. Which I’m not (although I later discovered that my relative ambidextrousness was very handy).  I went back and tried again, this time using a large plastic rectangle with a handle on the back instead of the trowel. It made a big difference, I can tell you. By some miracle, the mortar then started to stick. Well, some of it anyway, but it seems that professionals drop a lot along the way as well. You just scoop it up and put it back again. 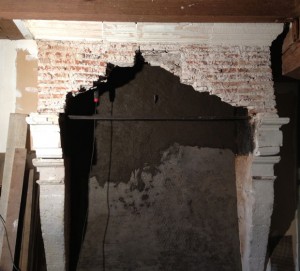 We worked steadily on and I started to feel more on top of things, particularly as we got past kneeling level and I could sit on my gardening stool which relieved my back and hands no end. Relationnel suggested I try mixing up the next batch of mortar. The bag was so heavy I couldn’t lift it so he tipped it in then added some water. I couldn’t even stir the mixture with the trowel it was so stiff so I set to with my hands. 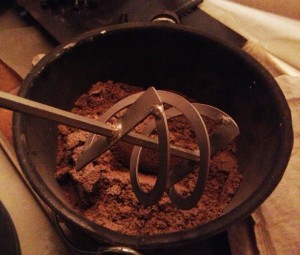 It was worse than mixing the Christmas cake. The cement and water eventually penetrated the surgeon’s gloves and became cold and sticky so Relationnel came to the rescue. It seemed a bit ludicrous not to have some sort of beater to make the process easier. When I mentioned this to Relationnel, he suddenly remembered that he had an attachment for mixing paint. He had to buy some mason’s pails first and use a really big drill, but the attachment didn’t break and it reduced the mixing time amazingly.

To cut a long story short, we finished the first section, using a large ruler to make sure it was even and smoothing it all out with my plastic rectangle. I have to confess that I thought the whole operation was pretty dicey considering the unevenness of the walls. I was pretty amazed at the result. 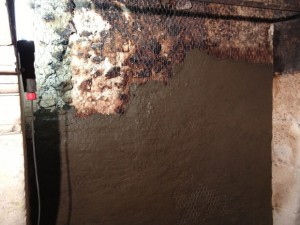 However, when we started the next section the following day, I found the mortar very stiff and had a lot of trouble getting it to stick on the wall. In the end I managed to get it on and when we finished the first layer of the second section, Relationnel came over to smooth my side down as I didn’t have enough strength in my wrists. As soon as he touched it, it all just peeled off, like marzipan on a cake. I was devastated.

That set off another flood of tears. I was particularly worried that what I had done the day before was going to peel off at some future point in time but Relationnel reassured me. In fact, after mixing up the next batch of mortar, he realised that it needed to be more liquid. I tried again with the new mortar, getting him to check that it was OK all the time, but in fact, it was fine.

After completing the visible part of the back of the fireplace in a total of three sections, I then looked after the last smoothing and evening operation, which fortunately was very successful so I was slightly mollified. Relationnel was was very proud of me. 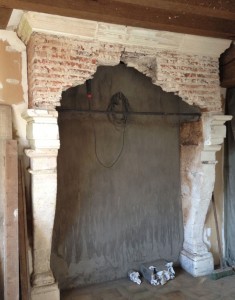 That night I practically cut the tip off of my small finger cutting up pumpkin which put paid to any further contribution and seriously disabled me for 48 hours as I could no longer touch type correctly. I’m sure you want to know what happened next, but I am going to keep it for the next episode!

This entry was posted in Loire Valley, Renovation and tagged fireplace renovation. Bookmark the permalink.

6 Responses to The Fireplace is Not Finished