A Visit to Chambord the Magnificent, including lunch

The day we went to Chambord, we really needed the break from our fireplace renovation. What I didn’t realise is that Chambord has over 300 fireplaces, a few of which look remarkably like ours. 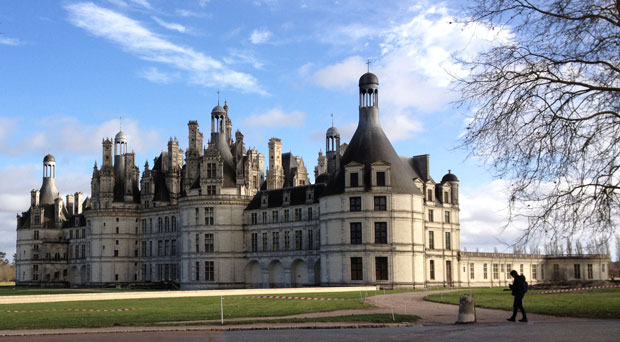 We had decided to have lunch at the Saint Michel, just opposite the château and as we entered the restaurant, the waitress apologised for the smoke from the fireplace. Well, we know what the problem is, don’t we! Tightly closed windows and insufficient air intake. But it was pleasant to have a fire and our Australian friends appreciated the hunting decor and actually liked the smoke. 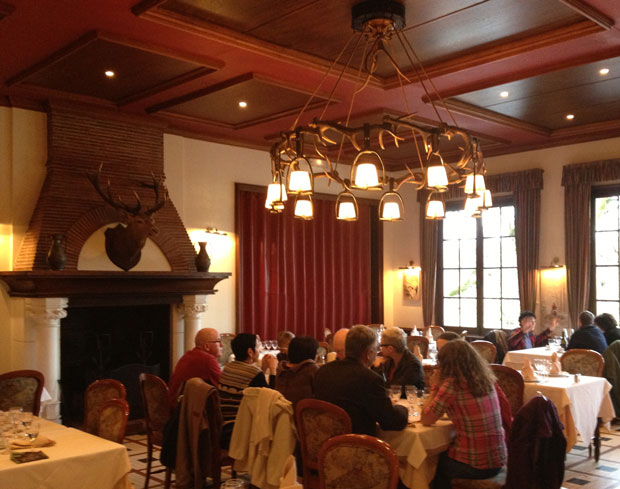 We all ordered the 22 euro “bistrot” menu as opposed to the 37 euro gourmet menu. I was amused to see that all the starters on the bistrot menu were Italian (smoked salmon and prawn cannelloni, prosciutto and mozarella bruschetta, beef carpaccio and mini red peppers stuffed with ricotta) while the main courses were traditional dishes (dear stew – no kidding –  steamed haddock, three fishes stew and lamb knuckel-end & smashed carrots  – also in the original. 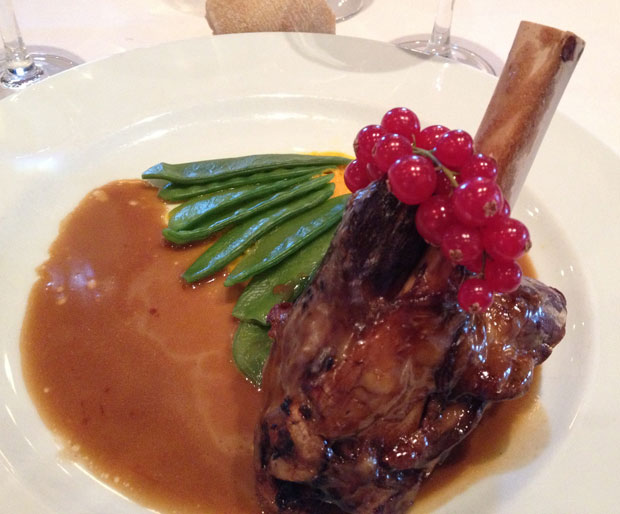 Dessert was pear financier, French pain d’épices toast with salted-butter caramel ice-cream and crème brûlée with green lemon – they meant lime of course. The food was tasty and fresh, except for the French toast which had seen better days, and the service was friendly. I learnt afterwards that it’s also a very reasonably priced hotel. I don’t know what the rooms are like but having breakfast with that fabulous view of Chambord might be worth a bad bed! 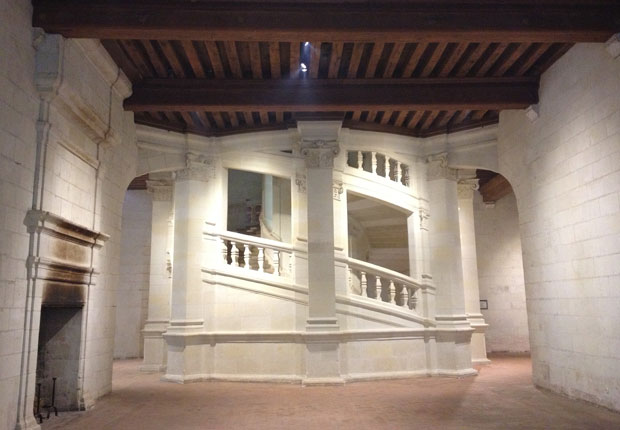 The first thing we saw when we went  into the château was the famous double-revolution staircase where two people can go up or down without ever meeting. Note the lack of people in the photo, perfectly possible in winter and totally unheard-of in summer. We were fascinated with the fireplaces and firebacks of course and loved the beautiful ceilings and other architectural details. One of the fireplaces is exactly the same shape as ours. 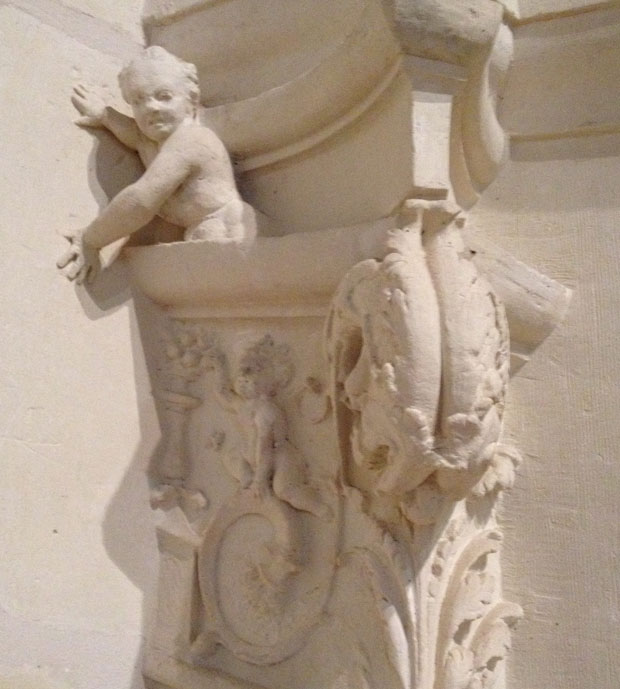 Just one of the many sculptural details

We headed for the roof (see my previous post on Chambord) while the light and weather were still good, which were were perfectly right to do because it started raining as we left. 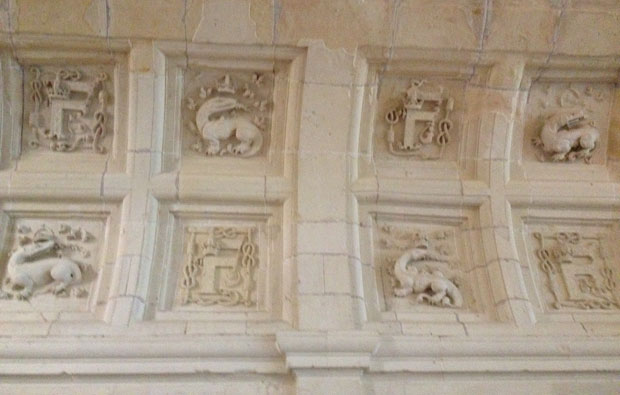 After our visit to the rooftops, I then discovered that there is a series of furnished rooms which I have never seen before.  It seems that in the mid-nineteenth century, the Count of Chambord decided to open the château to the public and furnish some of the apartments with his own private collection, mainly consisting of royal portraits. 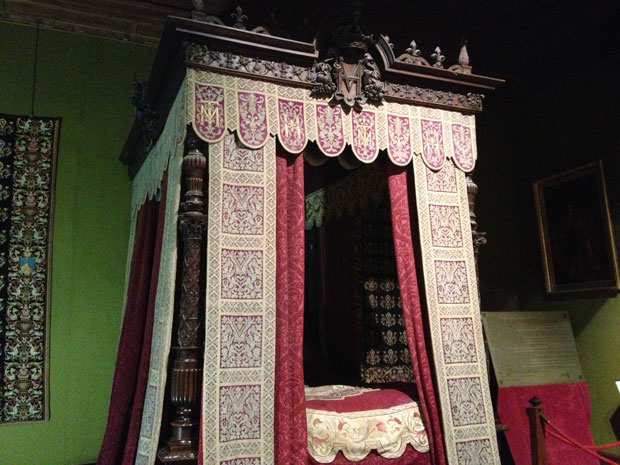 One of the many four-poster beds

When it became State property in 1930, there were 440 pieces, but only seven pieces of furniture. Today, there are 4,500 objects, including tapestries from the 16th to 18th centuries, and a large collection of furniture, particularly four-poster beds and objets d’art. 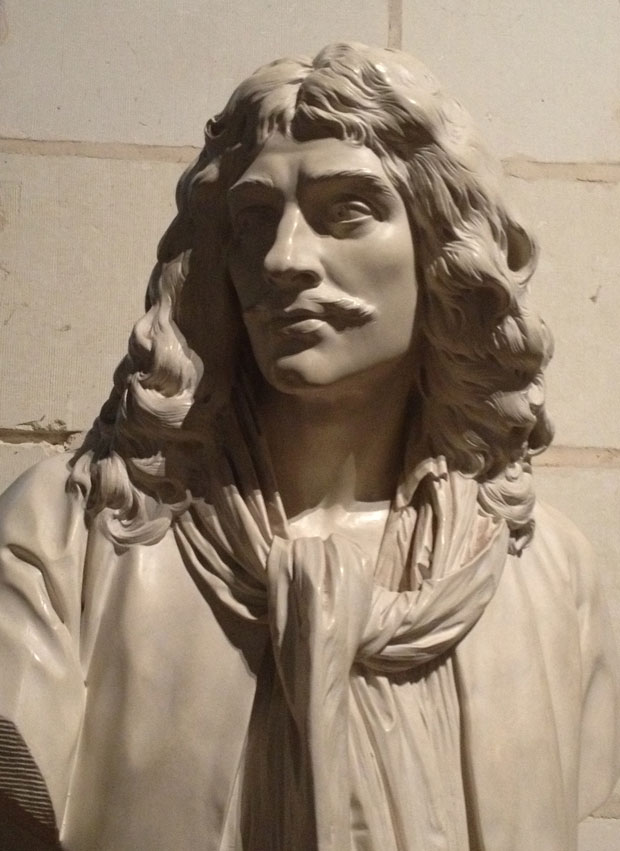 I even saw a bust of Molière, which I found surprising, but Louis XIV was also the master of Chambord and came to stay a total of nine times (far more than François Ier!), inviting Molière’s theatre troupe for entertainment. 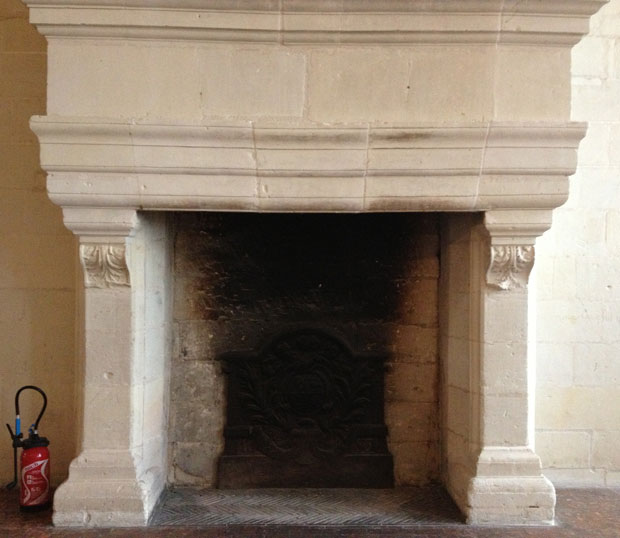 The fireplace that most resembles ours!

I felt as though I hardly touched on the wealth that Chambord has to offer, so next time we cycle there, I’ll make sure we visit as well. I may have to get a season ticket!

13 Responses to A Visit to Chambord the Magnificent, including lunch