Posted on December 6, 2012 by Rosemary Kneipp

Relationnel is arriving this afternoon with the kitchen sink. Well, almost. I wish he was. I am taller than the average Mrs Frog, unfortunately, which means that most sinks are way too low for me. It wouldn’t matter if I had a dish washer, but that is the one major item missing from Closerie Falaiseau and short of putting it in the bathroom (and that would not pass muster with my gîte guests now, would it?), it will continue to be missing until the kitchen is renovated in a couple of years time, at the same time as the addition of a very large bay window, complicated by the fact that the walls, you will remember, are about 70 cm thick. But I want light and a view of our wood. 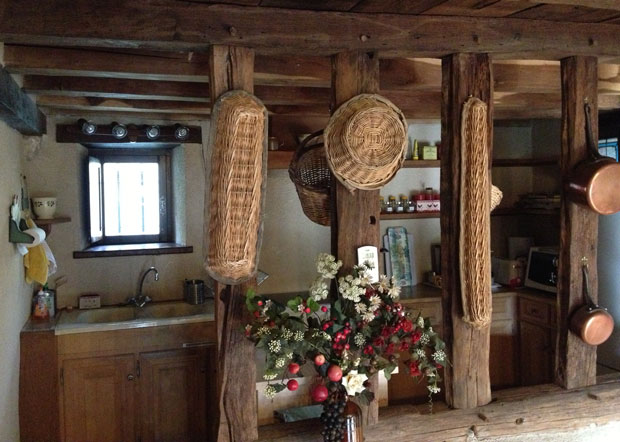 What Relationnel is bringing, though, is the electric knife sharpener (why do knives become blunt so quickly?), my sewing box (someone’s going to notice that coming-down hem soon), a couple of warm pullovers (so I can wash my only woollen cardigan) and the second cheap-O espresso maker (because pieces keep coming off the one here and my extragently expensive one now lives in Paris without me).

He’s also bringing the fireback for the renovated fireplace which he bought in Baie de Somme through leboncoin.com on Monday. I was so sad not to go with him but it seemed a little silly to take the train to Paris (1 ½ hours) then go another 2 ½ hours by car and back again. So I’m waiting eagerly to see the monster  which is a metre wide and weighs over a hundred and fifty kilos.

Leonardo’s company closing file is also coming down, sadly. I can’t believe it’s not finished yet but the Court wrote to say there were some things missing and a couple of errors. But Relationnel is also bringing the flowers Leonardo sent to me just as I was leaving Paris last time – the florist suggested delaying delivery until Relationnel could bring them down to Blois as it seemed a bit dicey to take them on the train with me. 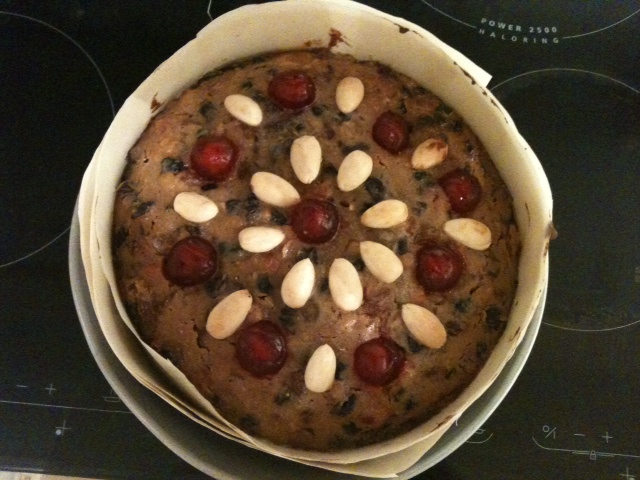 Last year’s Christmas cake fresh out of the oven

More importantly, the Christmas cake tin and ingredients will arrive tonight as well, though only Relationnel and I will be around to stir and make a wish, an unavoidable break in tradition this year as the cake is already late. I should have made it last time I went back to Paris. Of course. But I was too busy trying to close Leonardo’s company. 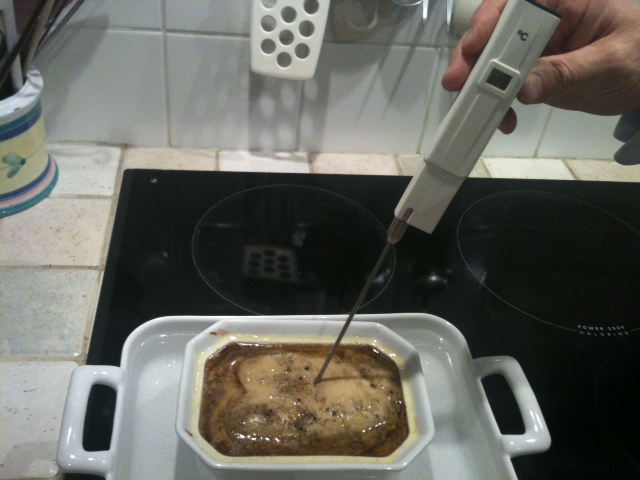 Taking the temperature of our home made foie gras

Apart from that, Relationnel is bringing all the materials needed to finish the BIG FIREPLACE OPERATION so we can wish in the New Year in front of a blazing fire, sipping vintage champagne and eating homemade fois gras (if we ever find the time to make it!). It could take a while to unpack from the trailer when he arrives. Then we’ll go out and celebrate our anniversary!

2 Responses to The Kitchen Sink