More Progress on the Fireplace

Posted on January 3, 2013 by Rosemary Kneipp

Relationnel said today that if he’d known how long the fireplace was going to take, he’d never have started the renovations. I’m not convinced though. I somehow can’t see him going to stay in a gîte somewhere else in France to enjoy an open fire when we are the proud owners of a 400-year old house with no less than four fireplaces. He might have started the refurbishment earlier though … 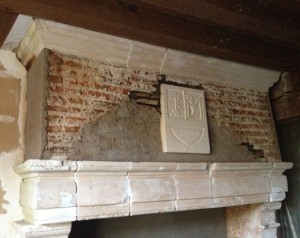 Mantle with rendering on one side

He has been working full speed for three days. The mantle is now more or less ready to take the whitewash. He’s had to reconstruct it inside and outside, requiring large amounts of refractory mortar and bits of brick and a lot of skill and patience. We had hoped to be able to renovate the stone but it is really quite damaged and would take weeks and weeks to restore. It has also been painted various pink and ocre shades over the centuries so whitewash seems the best solution. 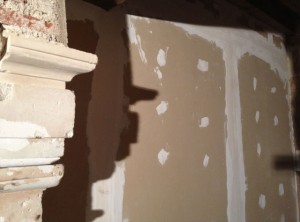 The right wall before painting

Having spent the first two days getting all my translations out of the way, I was finally able to contribute to the renovations today. Although there is rendering on the other walls of the room, the two panels on either side of the fireplace had been left unfinished, covered by a large bookcase on the right and a large cupboard on the left. Another cupboard stood in front of the fireplace. The previous owner left the bookcase on the right as it is almost an exact fit but the other side is completely bare. 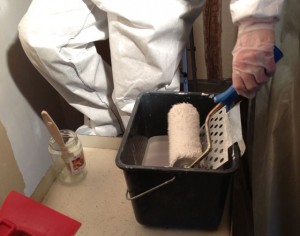 Paint roller with bucket and grating

Relationnel decided that if we were going to do renovations, we had to do them properly, including rendering on both walls. So that is my job. Today, I did the undercoat, an easy though tiring job because I’m not used to stretching my arms above my head, getting up and down a ladder to dip my roller in the paint, getting down on all fours to finish off the bottom, etc. 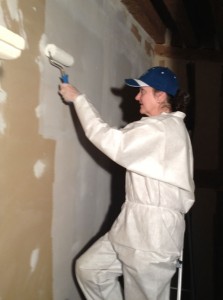 Fraussie putting on the primer

I donned my throwaway overalls and put plastic bags over my shoes to protect them and used the cap that I won with Carolyn Barnabo at the barbecue quizz we attended last year at the Australian Embassy in Paris. I always knew it would come in handy. Relationnel demonstrated how to put paint on the roller and I was off. 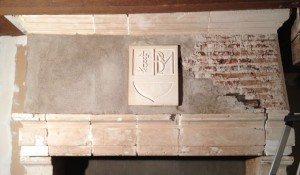 The mantle with only the right side to go

We used to have our house repainted regularly when I was a child in Townsville by professional painters and I certainly don’t remember ever seeing them use paint rollers. I don’t know when they were invented, but they are certainly a big improvement over those large brushes I used when I did my first paint job thirty years ago. 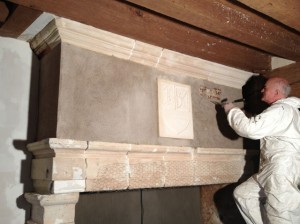 Relationnel does the last bit of rendering

Also, that water-based paint is a real boon. When you’ve finished, you just have to wash it all off the brush, roller (though since it was a cheap-O one so we threw it away), paint bucket and grid thing. The only disadvantage is that in winter, cleaning everything outside with no running water is a bit of a bind. It was easier when we painted the front gate in the heat wave last summer. 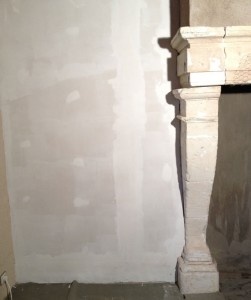 But Relationnel said I did a good job so I went off to make lunch while he did some more mortaring. We finally sat down at 2 pm by which time I didn’t want to move another inch. I asked Relationnel how long it would take to dry. “Oh, you can put the rendering on this afternoon if you want.” No way. I had a nap instead. I’ll attack that tomorrow! 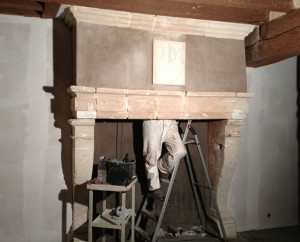 The current state of the fireplace

13 Responses to More Progress on the Fireplace