The Fireplace is Still Not Finished

Posted on January 7, 2013 by Rosemary Kneipp

This is the post that was supposed to announce that the fireplace at Closerie Falaiseau is finished and that we have opened our vintage champagne and eaten our home-made foie gras to welcome in the New Year. 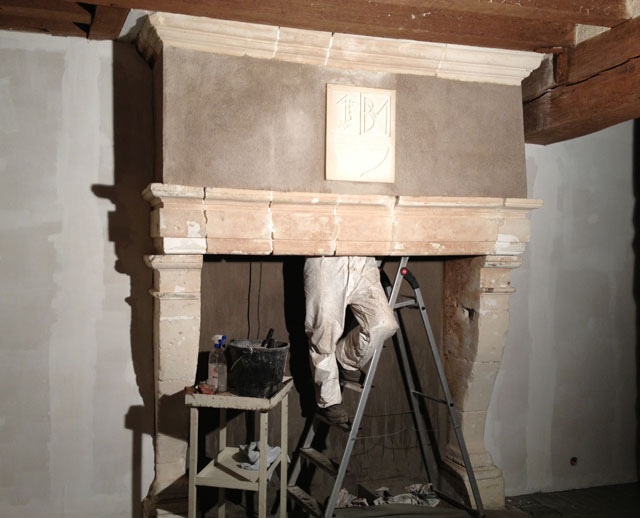 The state of the fireplace in the last post

Well, we’ve eaten some of the foie gras because of its relatively short lifespan. But you’ve guessed it – the fireplace is not finished despite the fact that we’re staying an extra day and that I have contributed far more than I initially thought I would. You may remember from my last post on the subject that I was going to put rendering on the wall on either side of the fireplace after priming it. 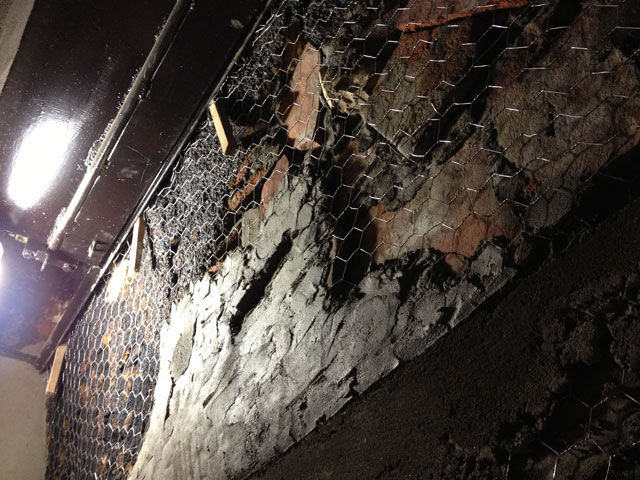 Well, since the mortaring of the inside of the mantel proved far more time-consuming than Relationnel initially thought, I figured I should volunteer for something else more urgent. I was told that I could fill the joints between the lintel stones. Not with putty, of course, but with lime mixed with sand and water. We’re doing this the traditional way. The information came from Nicolas, the man in charge of renovating our balcony in Paris who is apparently a superduper expert when it comes to stone. 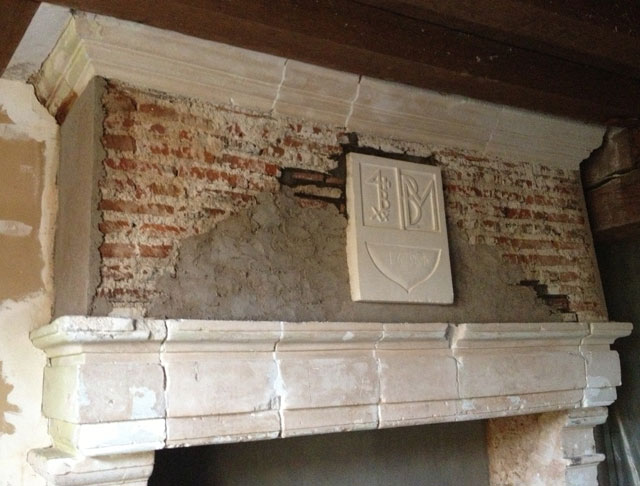 Damaged lintel before filling the joints and reconstructing the stone

My experience with mortaring the back of the fireplace came in good stead and I eventually got the knack of filling the joints. Then I filled the other cracks and holes. Relationnel said I was doing so well that I could reconstruct the missing bits of stone. Great! I was very skeptical at first but in end I managed to create something very reasonable. However, half the reconstruction fell out of one of the gaps I had filled, which was disappointing to say the least. So I didn’t even look at the biggest one. 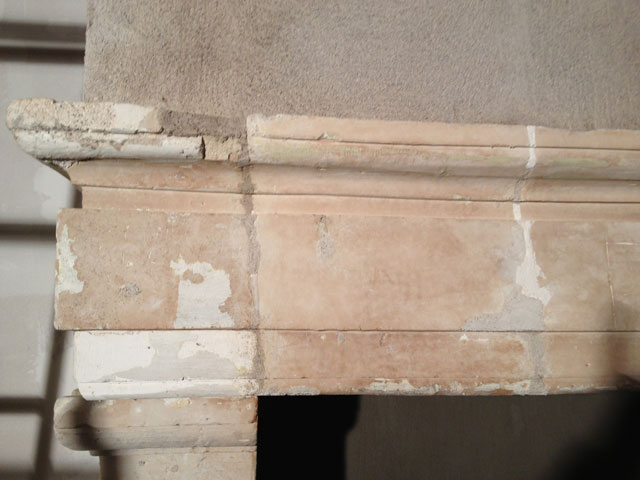 Partial reconstruction on the largest gap

Next day, I surveyed my handiwork and declared that the sand was too coarse so Relationnel produced some ultra-fine sand. Now why didn’t he tell me about that the day before? It produced much better results and I was able to reconstruct the one that broke and, with infinite patience, complete the gap I hadn’t even attempted. I was getting the hang of it. 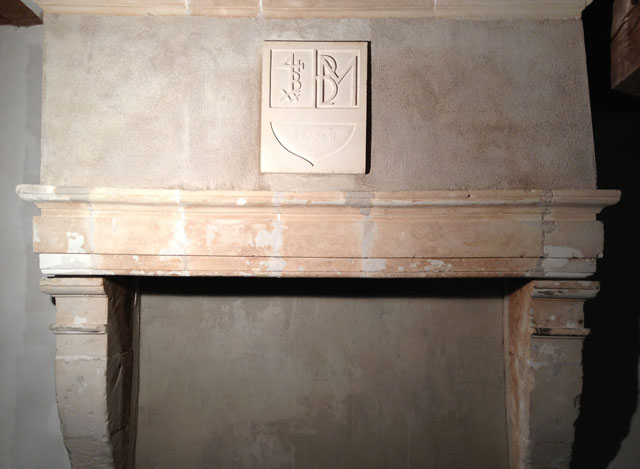 On Friday we needed more mortar so we both went to Brico Depot together. It was the first time in four days that Relationnel had set foot outside the yard. I’d been grocery shopping in the morning, so I was marginally luckier. We decided to go out for dinner on Saturday night to have a côte de bœuf at Au Coin du Table in lieu of champagne in front of an open fire and not talk about renovations  or fireplaces. We almost succeeded.

On Sunday morning, I got a new job – putting a coat of light-coloured rendering on the mantel using a water-down version of the fine-sand and lime concoction applied with a spatula. That was a joke! The first batch was too thick but we eventually found a workable consistency and did it together, with me on either side and Relationnel at the front. When it dried, it looked very uneven and not much lighter than the first time, just not as rough. Hmm … 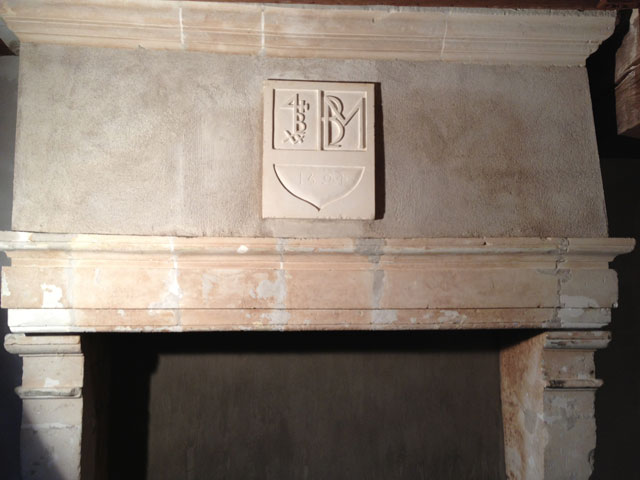 Mantle after second lot of rendering on the mantle

When Susan and Simon from Days on the Claise arrived for lunch, with half the meal to boot, we were definitely glad of the diversion. They also run a tour business called Loire Valley Time Travel, taking visitors to the châteaux in Celestine, a Citroën called a traction avant which started life in 1953. Unfortunately, the weather wasn’t brilliant and we didn’t get to meet Celestine, though maybe we’d never have got back to our renovations if she we had!

After lunch, I volunteered to whitewash the fireplace. Well, I gathered that was what “fleur de chaux”, water and a savvy mixture of pigments corresponded to. I was a bit doubtful  about its ability to cover up all my handiwork, not to mention someone else’s plasters and the remains of a colour job somewhere along the way, ranging from dark red to yellow and pink. So we got out the scales and made up our extremely liquid mixture. 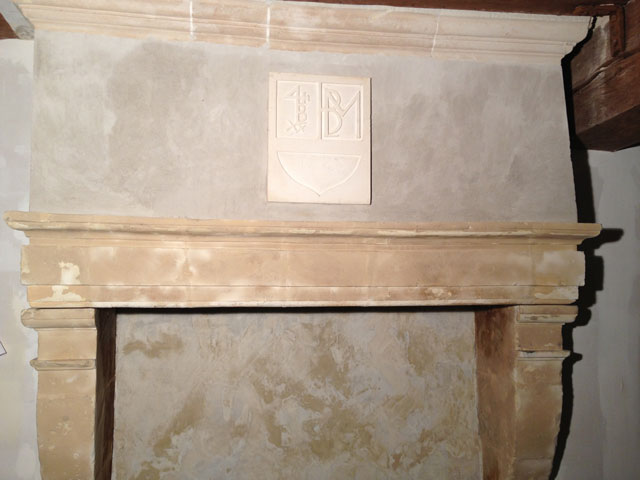 Result after the first limewash

Relationnel started panicking and said it wasn’t even worth trying but I was more philosophical. It looked a darned sight easier than anything else I’d done up until that stage. Why not give it a try? The result was not quite what we expected. I’ll tell you what we did about it in the next post!

6 Responses to The Fireplace is Still Not Finished