I don’t know if displaced tropical Queenslanders are more likely to suffer from SAD (Seasonal Affective Disorder or Winter Depression) than others but I can’t find any other explanation for having felt so down this week. Already the days are short (it’s only light from 9 am to 5 pm max) but the scaffolding on the balcony cuts out most of what natural light there is and gives artificial neon light from 8 am until 7 pm. The flower seller at the market found me so down on Sunday that he gave me a kitchy little pot of four-leaf clover! 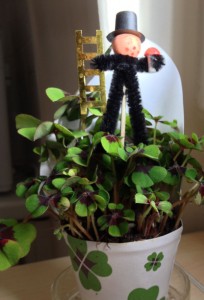 Four-leaf clover to cheer me up

Relationnel was told the scaffolding was moving to the next set of windows today so about 10.30 am, I went downstairs to find some workmen to ask. They reassured me it was D-Day so I raised my arm and said “yey!”. They looked a little surprised so I explained that they were my windows that had been obscured for the last four months. 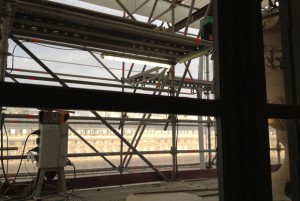 The scaffolding outside my window

The sun was out, the sky was blue and just going downstairs seemed to cheer me up so I thought I’d go to Rue de Rennes to look after the missing suitcase invoice problem. First stop was a shoe shop called Arcus. I gave them the date and amount. They were very friendly and immediately tracked down the purchase and gave me a receipt. 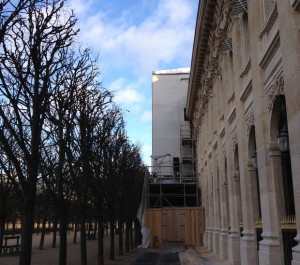 The scaffolding seen from downstairs

Then I walked down to Boulevard Saint Germain to one of the Au Vieux Campeur shops. Parisians swear by this shop, though I don’t really understand why. It used to be just one shop on rue des Ecoles selling outdoorsey stuff. It is now a series of speciality shops – 29 in the Latin quarter alone – selling everything to do with sport and camping.

My objection, apart from the prices, is that the shops I go to (mainly for walking shoes) are always full of people. I spent a full hour trying on every possible pair of shoes in the shop before we went to Australia in September. I finally bought some ugly looking turquoise and grey shoes that gave me horrendous blisters in Tasmania. And then, when I had finally worn them in, they disappeared with the suitcase! 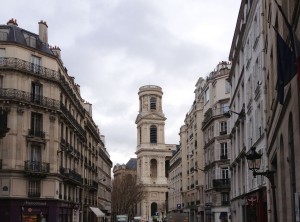 So I went back to the shop where I bought them, stood in line and asked for a receipt. I was sent to the “main shop”, two streets away. I queued there as well only to be told that I had to go back to the first shop. The lady rang up the guy and told him he had to give me a receipt. I went back and stood in line and gave him the details. He couldn’t find my purchase of course. “What time was it?” You gotta be joking – I’m supposed to remember the time I bought the shoes? I only know I was there for too long.

He finally sats it is not in his cash register. “Is this the only place I could have paid for the shoes I got downstairs?” “No”, he says relunctantly, “there are those two as well”, indicating a couple of computer screens further along the counter. “You mean, these three cash registers are not connected up ?” “Er, no.” “Are you telling me I have to wait until there are two more sales people to check?” “Well, I could turn them on.” Which he eventually did and I queued again while he served another few people. 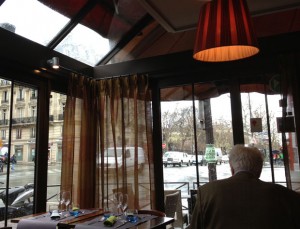 The bistrot with the awful food – Le Cluny

Not that I blame him, it must have been very annoying for the other customers. Anyway, he still couldn’t find any trace of my purchase so I dispiritedly went out, by which time the rain was absolutely pouring down and I didn’t have an umbrella. I took refuge in the closest brasserie, Le Cluny, and ate an absolutely awful meal of spare ribs and potatoes. The young waiter commisserated and gave me a free coffee.

So, here I am, back home, still waiting for the scaffolding to move and it’s already 4.30, which is terribly close to knock-off time.

Next day’s update: removal of the scaffolding is now postponed to 7th January.