Judging by the somewhat austere façade of Guell Palace, what would you expect to find inside? 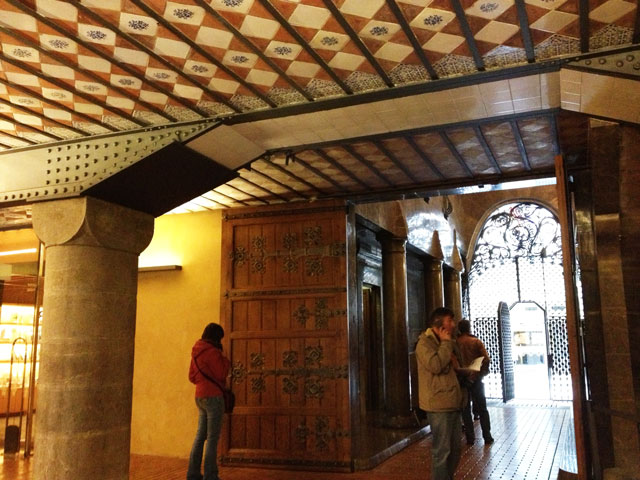 As soon as you walk into the double vestibule designed to make it easier for carriages to go in and out, you are struck by the juxtaposition and opulence of the different materials: stone pillars, steel beams with visible rivets, wooden ceilings with intricate caissons and incrustations, massive doors with beautiful wrought iron work, coloured leadlight windows and embossed leather chairs. 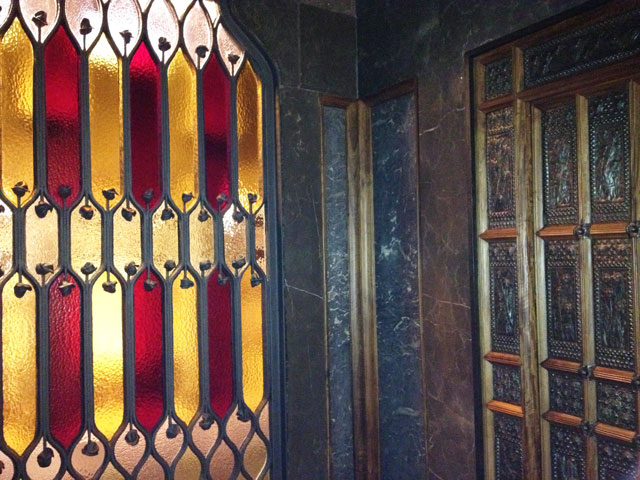 A horse ramp takes you down into the basement with its stunning vaulted ceilings that once housed the stables. You walk up the stairs and find yourself in an antechamber from which you can see the central room with its parabolic dome and real organ! Gaudi had ten children, who were all very musical and he himself was a great lover of music. His daughter, Isabel, was a well-known composer and musicians often played in the palace. 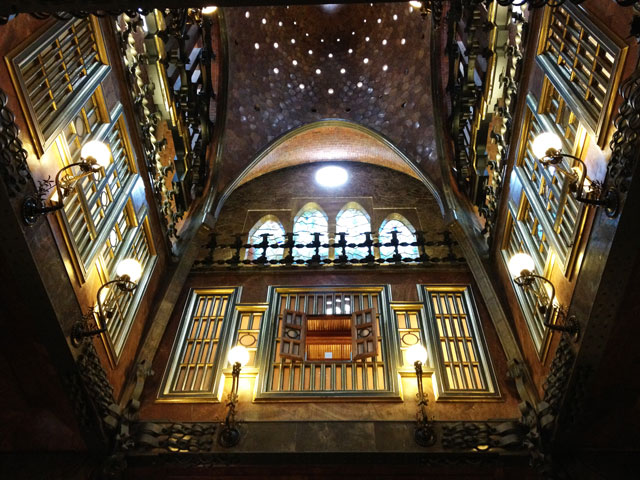 Natural and artifical light penetrates the room through circular openings in the dome. While we were there, the organ suddenly burst into life, taking visitors by surprise. It was a magical experience. 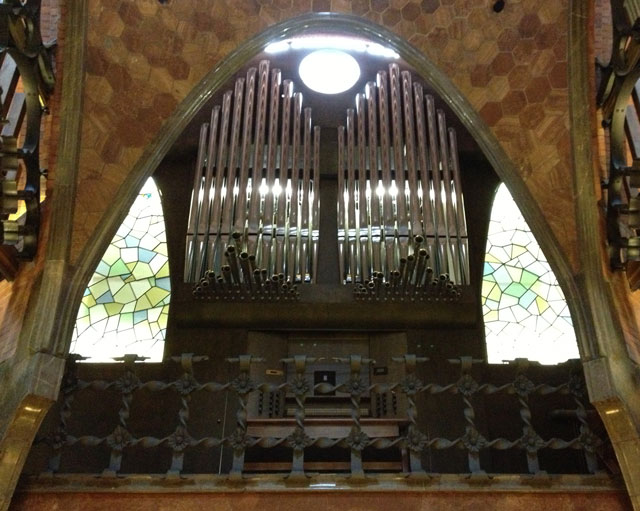 On one side of the central room is the lobby in the centre of the gallery overhanging the street, with its parabolic windows. 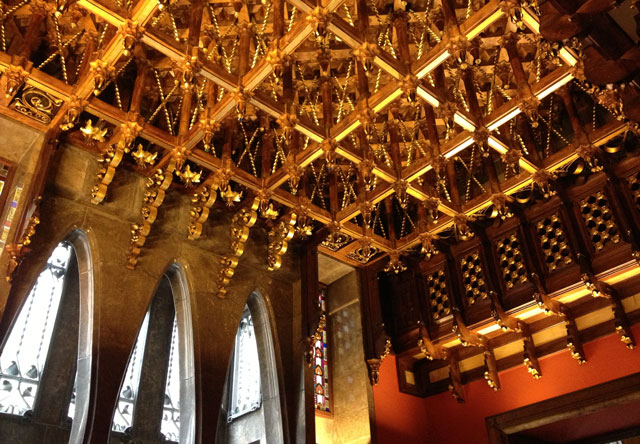 Lobby with its oblong arches and caisson ceiling

There’s a chapel on one side that could be closed off to form an oratory or opened up for services. The walls are covered in sheet brass and the doors are decorated with slivers of bone and turtleshell. 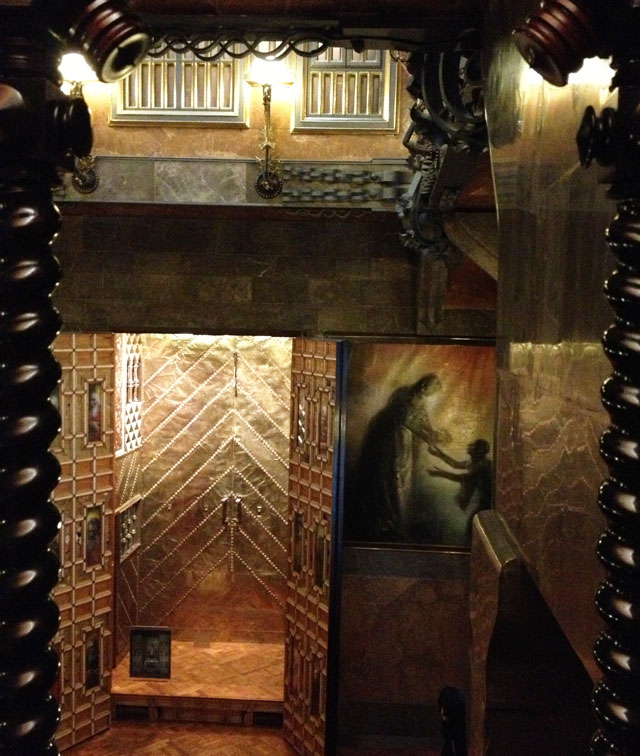 All the furniture in the dining room with its beautiful polychrome leather backed chairs is original. The décor was designed by Camil Oliveras, who worked with Gaudi. 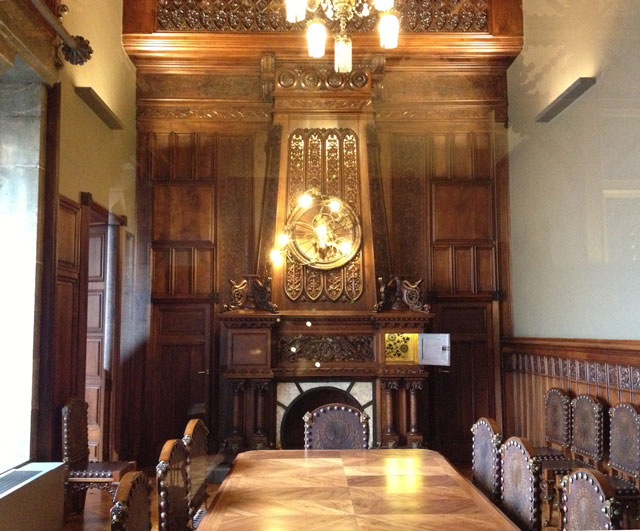 Upstairs are the bedrooms. Count Guell  and his wife Isabel each had their own bedroom with an en-suite bathroom, most unusual for the time. Apparently they didn’t often live in the palace because Isabel didn’t like it very much. I can understand why. Even though the architecture is very avant-garde, it seems more like a showpiece than a home. I personally wouldn’t have liked to sleep in her bedroom. 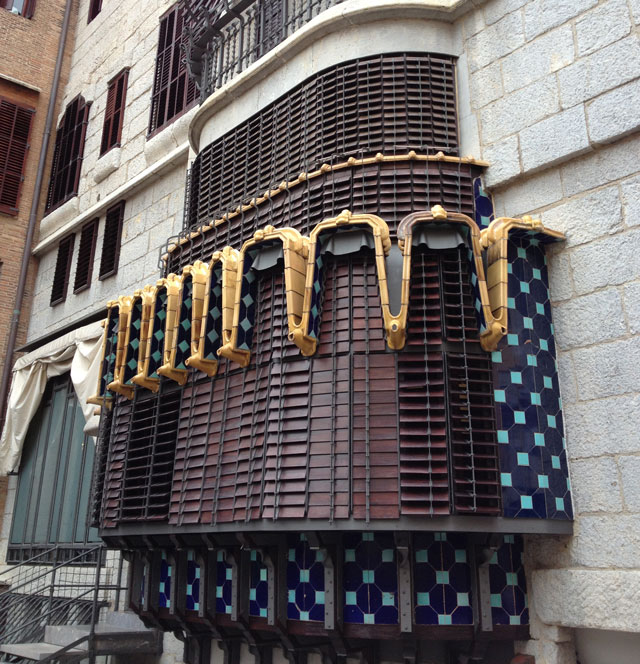 There is a back terrace with a rather unattractive oriel window with louvres to protect the inside from the sun. There are several other small rooms that I haven’t mentioned, including the younger Isabel’s bedroom which is surprisingly on the main floor behind the oratory. 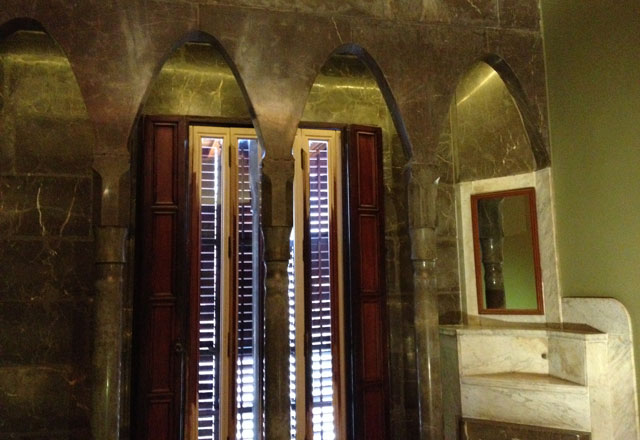 The other rooms are not open to the public and I described the chimneys on the roof in a previous post. Guell’s oldest daughter Mercé inherited the house but eventually turned it over to the State because she couldn’t afford the upkeep. It was declared  a National Monument in 1969 and added to the World Heritage list in 1985, the first modern building to receive that distinction. 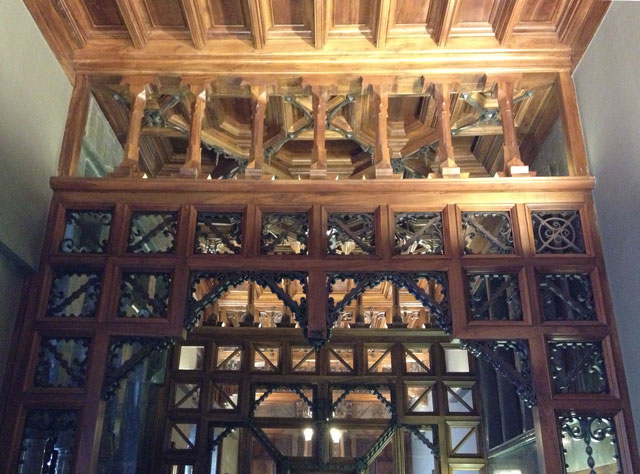 This entry was posted in Architecture, Spain and tagged Gaudi, Guell, Guell Palace. Bookmark the permalink.