I hope you’re not sick of Gaudi yet because I still want to tell you about Guell Palace, Casa Batlló and Casa Mila, also known as La Pedrera, all three of which are on the Unesco World Heritage list. You’ve already seen the chimneys which I think are probably the most exciting part, but there are lots of other very interesting features as well. We visited the houses in the order in which they were built, as I thought it would be interesting to see the progression. 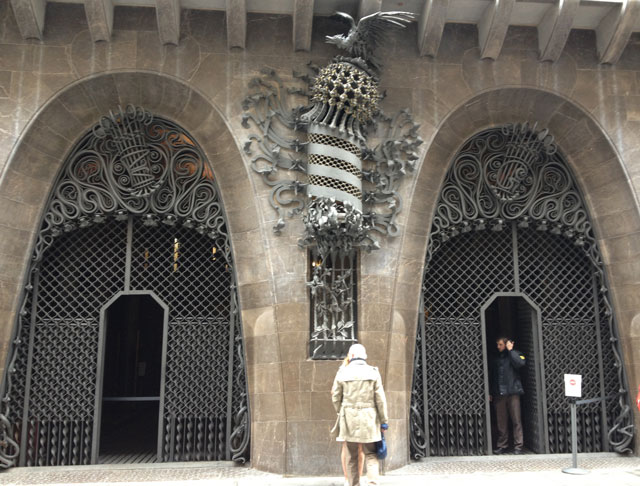 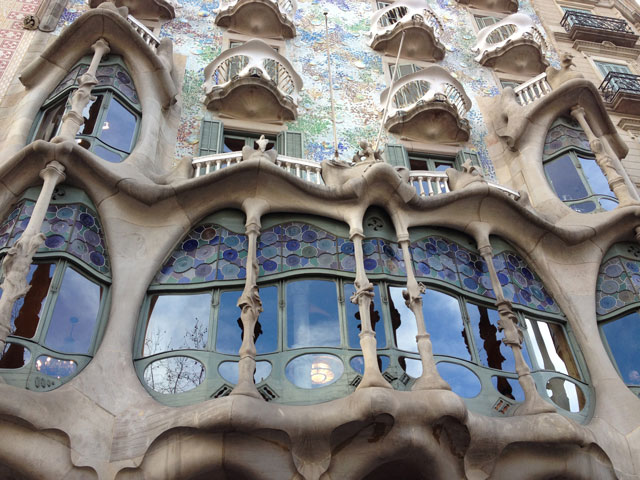 The queues were not very long, but I imagine it’s very different in the summer. You can book on-line at the following websites: Casa Bottló: http://www.casabatllo.es/en/buy-ticket/general-ticket/, payment by credit card or Paypal and La Pedrera: http://www.lapedrera.com/en/buy-your-ticket. I couldn’t find any sign of on-line bookings for Guell Palace. 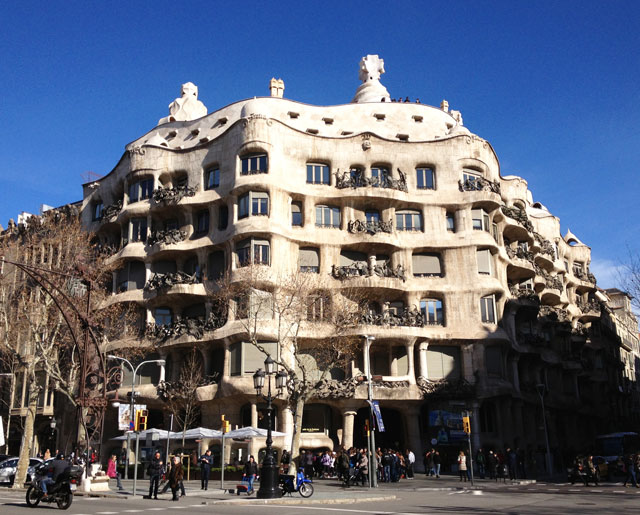 I thought I’d start with a comparison of the façades and describes the interiors in a subsquent post. Guell palace was built between 1885 and 1890. When construction began, Eusebi Guell, a rich textile manufacturer with a solid background in economics, law, science and the humanities, was 39 and Gaudi was only 34 and keen to break with tradition, with the unmitigated support of Guell. You may remember that Gaudi took on the Sagrada Familia in 1883 at the age of 31. 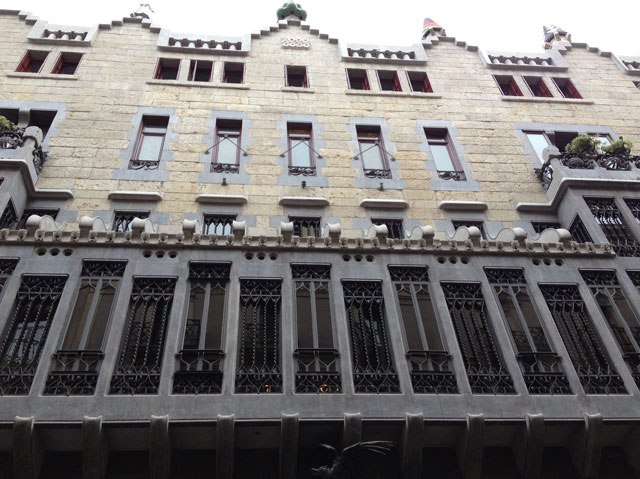 The façade is quite austere compared with the other houses.  It has unusal parabolic arches with intricate wrought-iron work in the middle topped by a Venetian style tribune with leadlight windows. The rest of the façade is made of stone. 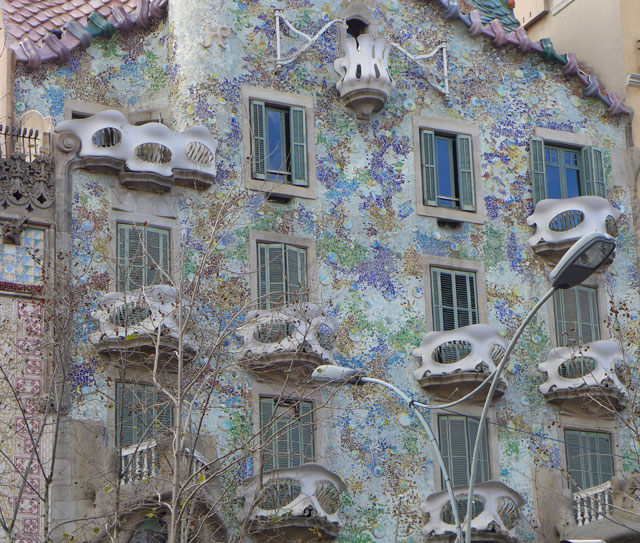 Nothing could be more different than the façade of Casa Batlló. It is located on Passeig de Gracia, a favourite promenade with the local bourgeois families. The house was 20 years old when Josep Battló bought it in 1903. He thought it looked somewhat dull next to its neighbour, Amatller, so he decided to call in Gaudi who, at 52, was at the height of his popularity, having started work on Guell Park in 1900. 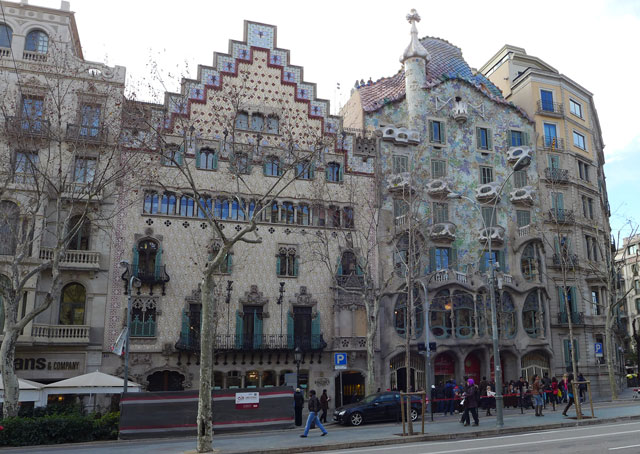 Gaudi kept the original structure and added two additional levels; the façade was a complete remake and is covered in the most wonderful mosaic work, along with other highly original details such as wavy walls, mask-shaped balconies, bone-like pillars, giving it the nickname of “Casa dels ossos” or the “House of Bones” and enlarged windows, for which it was dubbed “Casa Dels badall”s or the” House of Yawns”.   The roof is shaped like the back of a dragon. 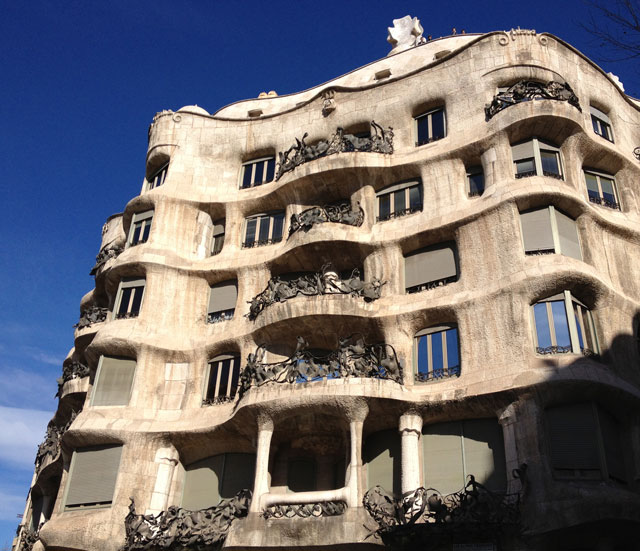 Side façade of La Pedrera

In 1905, Père Milà and Roser Segimon, a rich widow, decided to invest her fortune in a large piece of land further down the same street and commissioned Gaudi to build a six-storey apartment building of which they would occupy the 1,300 sq.m. main floor. There was a lot of friction between the architect and the promoters who didn’t appreciate having to pay out more and more money for bold decorative effects and construction principles that were strongly criticised by the press. 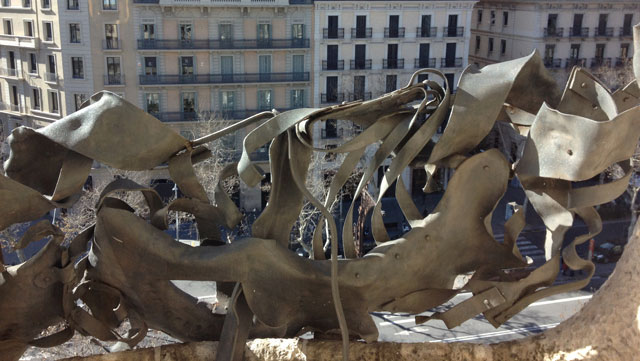 Wrought-iron balcony at Pedrera from inside

Its nickname of La Pedrera, which means “quarry” in Catalan, is due to its three cream-coloured stone façades which change colour as the light waxes and wanes. With their wavy lines,  extravagant wrought-iron balconies and 150 windows, the overall effect is like billowing waves.