Only two posts on this Wednesday’s Bloggers Round-up (I’m a little pressed for time). Mary Kay from Out and About in Paris, brings us a very interesting interview with a kiosquier as Paris celebrates 150 years of newsstands. Niaill and Antoinette from Chez Charnizay take us on a visit of Chinon castle in theL oire Valley. Enjoy! 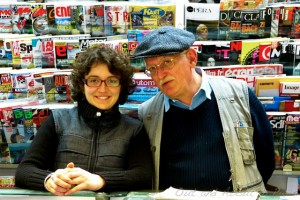 From April 17 until April 21, Paris is celebrating the 150th anniversary of one of the most iconic symbols of the French capital – its kiosks. On Friday, I had the pleasure of interviewing Jacky Goubert and his daughter Gaelle, who operate the kiosk on the Boulevard Saint-Germain between Café de Flore and Les Deux Magots. It’s where I buy the International Herald Tribune whenever I’m in the neighborhood.

MK: This has to be one of the best kiosks in Paris. How were you able to get the concession for it?
Jacky: Normally, it’s not possible to pass a kiosk from parent to child because they are only licensed and not purchased from the city. But somehow my mother arranged for me to take it over when she retired. She started working here in 1972. Read more

by Niaill, a Scotsman, and Antoinette, a Dutch American, from Chez Charnizay, who live in the village of the same name in southern Touraine  and blog about their adventures in the Loire Valley 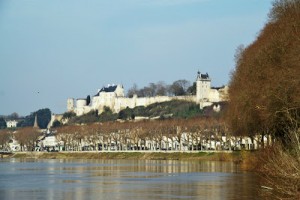 We like Chinon and we stopped by again earlier this month. We’ve always liked Chinon from our very first forays into the Loire Valley as tourists in the early 1990’s. This despite the fact that every time we approach it from the south side of the river Vienne and pass the SuperU [it wasn’t a SuperU then but some other chain] on the left-hand side of the road where it runs between huge plane trees we’re reminded of our failure at the time to get to grips with the French custom of closing on the dot of noon for lunch. At least 3 times we were doomed to disappointment at that supermarket, arriving just as the doors were firmly closing.

The fortress walls as we see them today are mostly due to Henry, Count of Anjou, later King Henry II of England. It was one of his favourite fortresses, which is hardly suprising given its strategic location on the crossroads between 3 regions: Anjou, Touraine and Poitou. Read more

This entry was posted in French customs, Loire Valley, Loire Valley châteaux, Paris and tagged chez charnizay, chinon, chinon castle, kiosks in Paris, Out and About in Paris. Bookmark the permalink.