Vouvray and a Troglodyte Restaurant

Our lovely friends from Sydney, Redfern and Saint Vincent are staying with us in Closerie Falaiseau. They’re spending a couple of months visiting different parts of France and improving their French which is wonderful for Jean Michel because it means they can communicate directly. 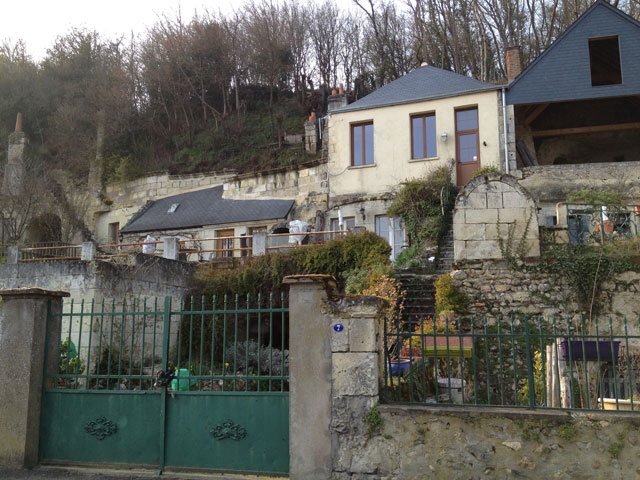 Troglodyte houses in Rochecorbon when it wasn’t raining

We’ve been wanting to buy some wine in Vouvray and try out a troglodyte restaurant there. After closing for winter, Les Gueules Noires has just reopened so we book a table then phone Monsieur and Madame Freslier whose wine we first discovered over ten years ago through our trusty independant wine growers’ guide Gilbert & Gaillard. 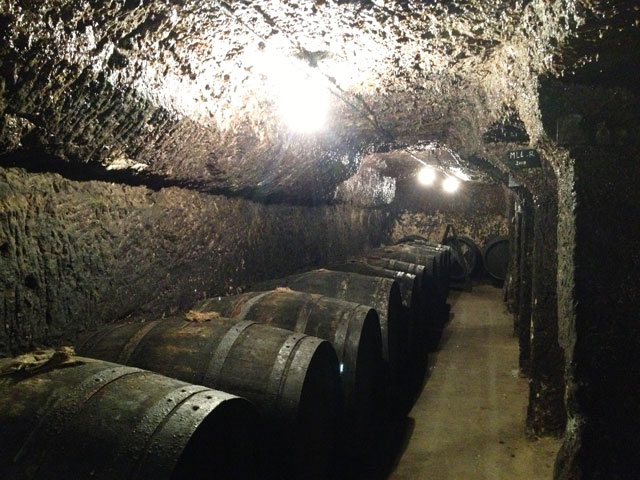 Tonnes in the Freslier limestone cellar

It’s pelting with rain when we arrive at the cellar door. Mr Freslier senior, 88, shuffles out to meet us. He tells us how he and his uncle dug the wine cellars themselves out of the limestone cliffs. Madame Freslier arrives and takes us to visit the oak tonnes as they call the barrels here. We pass stacks of bottles glued together with drippings from the limestone ceiling. 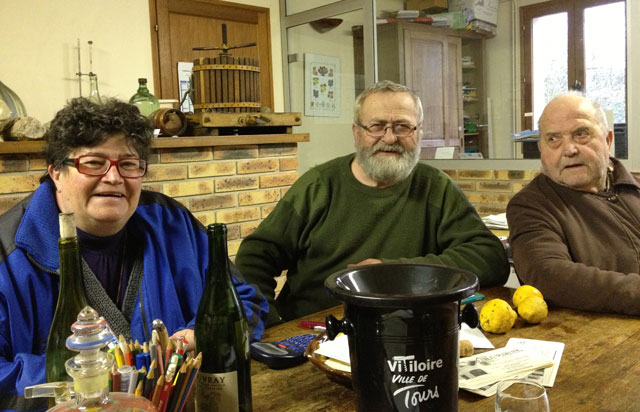 Mr Freslier Junior joins us and we all sit around a long table tasting different types of white wine made from the local chenin grape. The sweetest of the still wines (vins tranquilles) is the vendanges tardives (last harvest), followed by moelleux, then demi-sec and sec. Then there are two sparking wines : pétillant is a natural sparkling wine with less pressure than the mousseux which is made using the méthode champenoise. 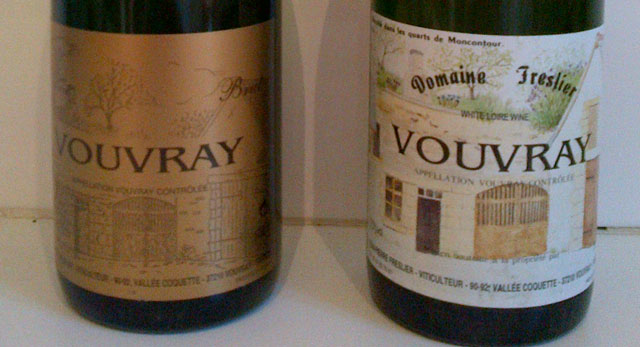 We mainly buy the mousseux because it seems to be the most popular apéritif in the region and at 5.80 euro a bottle, it’s certainly a bargain. I’m disappointed to see the labels have changed. I really like the old ones. 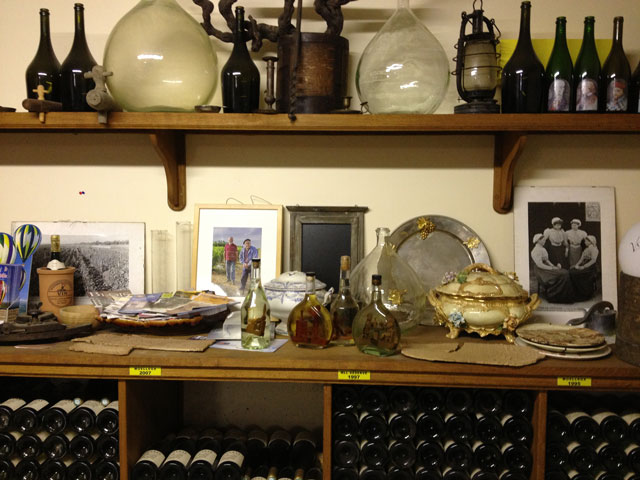 During the tasting, we mostly talk about dinosaurs and fossils of which the limestone cliffs have preserved an amazing number (not the dinosaurs of course). We also talked about corks. Most corks these days come from Portugal. Mr Freslier is very reticent about using screw tops on his bottles because he says they don’t breathe which means the wine won’t keep while Madame Freslier says she would miss popping the cork! 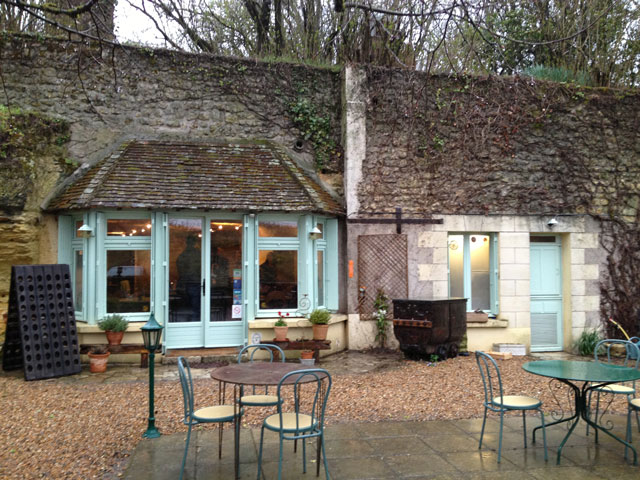 The rain’s still going strong when we leave but Les Gueules Noires is just around the corner. It turns out that Jean Michel and I came here the first time we went to see the Fresliers, but it changed hands two years ago and the cuisine is more inventive. 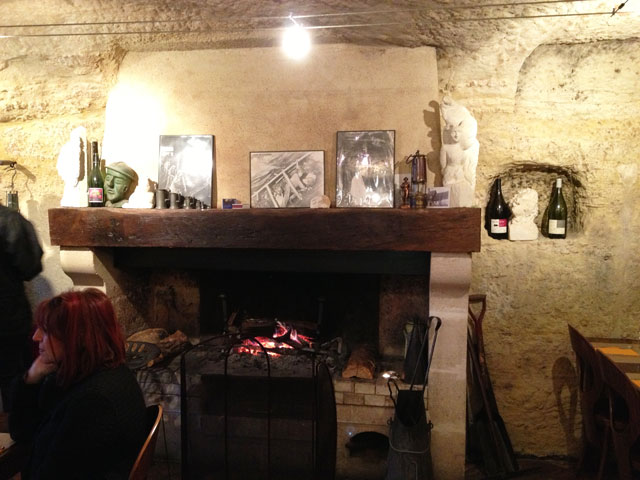 The dining room is typical of troglodyte dwellings which, like Monsieur Freslier’s cellars, are made by digging directly into the limestone cliffs. There are only windows on the façade of course. There’s a fireplace but the room is quite chilly, which is not surprising with the awful weather we’ve been having. I don’t imagine they’re the warmest places in winter! 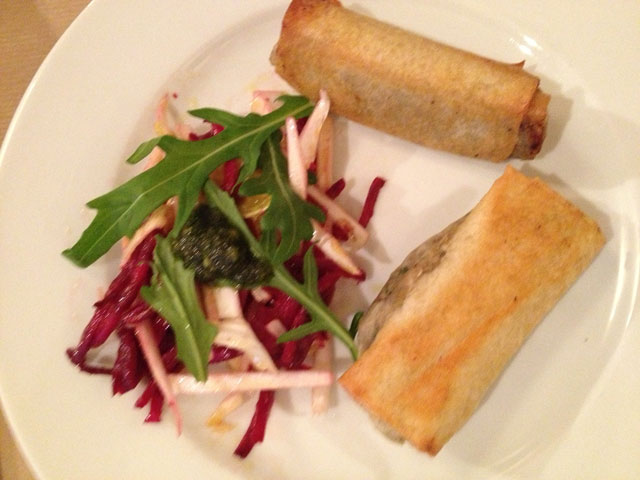 The menu is on a blackboard and the waitress explains the different dishes, which seem to have a both a Belgian and Japanese influence. Among the entrées, we choose sardines rillettes in filo pastry and gravlax salmon with horseradish with some other interesting bits and pieces. 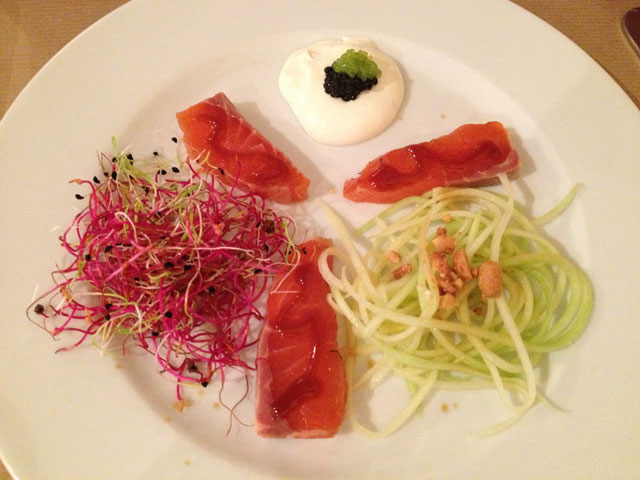 The main dishes include swordfish with mushrooms and maki, waterzooi (a Belgian chicken stew) and cold meat in aspic with French fries (well, probably Belgian). 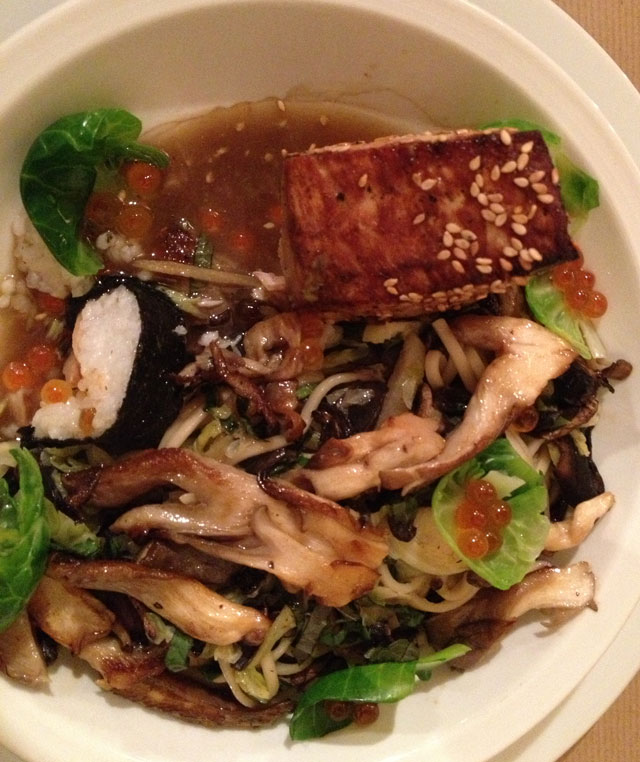 Sword fish with mushrooms and maki

The desserts we chose are speculoos mousse (speculoos are sort of brown ginger sugar biscuits) and  chocolate fondant with banana icecream. 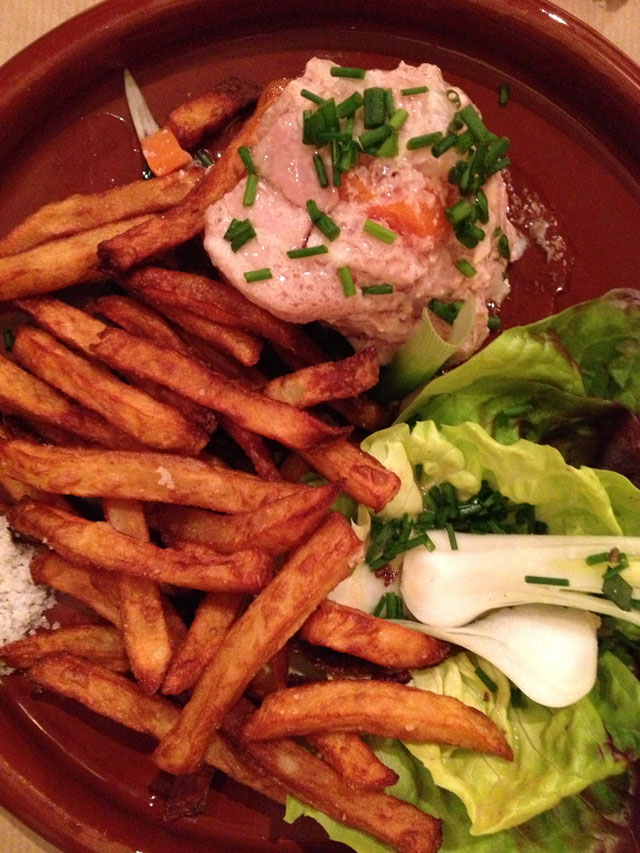 I personally find the entrees the most interesting and the desserts a little heavy. The food is innovative and the ingredients obviously very fresh but the result is a little disappointing.   The service is friendly and there is a good selection of local wines (we choose a bourgueil). The prices are reasonable, with the entrees and desserts at  less than 10 euros, the main courses less than 15 and the desserts.

10 Responses to Vouvray and a Troglodyte Restaurant