Susan from Days on the Claise published a post recently about a florist shop called Vachement Fleurs. She also mentioned in a comment that her neighbour once told her she spoke French comme une vache espagnole – like a Spanish cow. What an insult! But it set me thinking about vache and its variants. 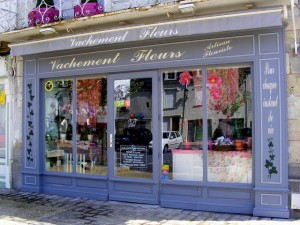 I have a French friend whose favourite expression – I can hear him saying it as I write – is “Oh, la vache !” which is his empathetic reaction to anything unpleasant.

When you speak of someone as a vache as in quelle vache ! – it’s very close of our “what a sod/swine/cow/bastard”. Vache or grosse vache (fat cow) was also used in the past to designate a prostitute.

Vacherie was originally a herd of cows but now means something nasty or bitchy. Dire des vacheries means making nasty remarks. Quelle vacherie de temps could be used very appropriately to describe the horrendous weather we’re having to put up with at the moment in France. Il m’a fait une vacherie means that he played a dirty trick on me. 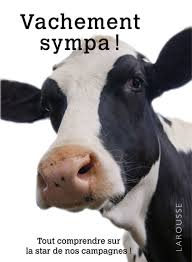 Jean Michel says he never uses vachement, that it’s not very elegant, but I’ve heard all sorts of people use it and I’m sure he does too.

The first time I heard the word was in Noumea back in the early seventies when I was still at university, in the expression vachement chouette, roughly meaning “it’s pretty good”, which is very strange because a chouette is an owl (the sort without those pointed tufts on their head called aigrettes in French – otherwise they’re called hibou) . Afterwards, we all used to go around saying “it’s cowly owl” and laughing uproariously. We were very young and silly in those days …

I checked the origin of chouette but nobody knows why it started to be used in the early 1800s to mean something pleasant. Rabelais used it to describe a loose woman. A connection maybe?

Incidentally, vachement fleurs doesn’t appear to have any particular significance. I don’t know whether it’s connected to Vachement Fleur, a chain of florists in Belgium, but they don’t have an “s” on “fleur”.