After my post on Bonjour, I’ve been asked to write about la bise, one of the great mysteries of French social interaction. I’ve heard it described as the air kiss which isn’t a bad definition. You lean over towards the other person and touch first one cheek and then the other with your own cheek, kissing the air with or without a smack or a movement of the lips as you do so. The number varies from two to four and is both regional and personal. 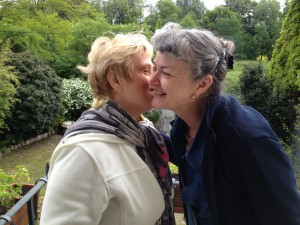 Me giving the bise to Françoise – note my right hand

I’d like to start by saying that the more casually you deal with the situation, the easier it will be.

One of the great dilemmas facing Anglosaxons is HOW MANY.

Well, it’s up to you to decide. Why should the other person always determine the number of bises and not you just because they’re French? Yet that is what most Anglosavons believe. 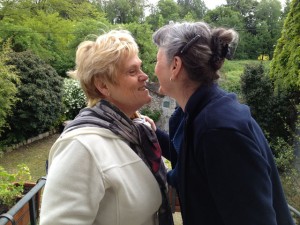 Going towards the left cheek

You can choose the usual number practised in the area you live in – a map has even been drawn up!  – and if someone doesn’t reciprocate with the same number, just laugh and say moi c’est deux or moi c’est quatre or whatever. Or you can wait and see what the other person does because the number is not only regional, but also depends on social class, the number being less the higher you go.

Which side to start with can be a problem as well. It’s very strange, in my opinion, that not everyone starts on the same side. I always go to the left first (right cheek), which seems to work most of the time, but occasionally you have someone who starts on the right. It would seem that left-handers have a tendency to go in the other direction. Once again, you can let the other person initiate the procedure is you’re worried. It can also be a question of size and personality! 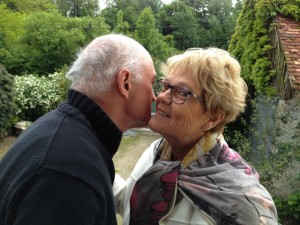 Jean Michel giving the bise to Françoise, starting on the rigth

The bise is part of a whole ritual among young people, especially teenagers and you’ll see them arrive at school and do the rounds of all their friends. Even some of the boys do it among themselves which surprise Anglosaxons.

La bise is not restricted to female/female and female/male but male/male is usually only practised among men who know each other well, particularly family members.  A friend told me a very funny story about an American friend visiting her who witnessed two men – firemen at that – affectionately greet each other with the bise. She nearly keeled over with surprise! 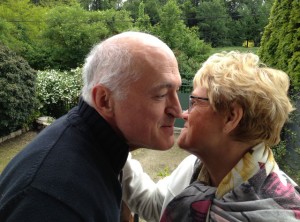 Jean Michel only kisses male members of his immediate family (father, brothers, sons) and one male friend who doesn’t have any family of his own and always insists on giving the bise. It seems to be a generational thing as well, becoming more prevalent among the younger generations.

During my personal bise survey (and thank you for all your answers), many friends of my generation (50 +) complained about the fact that it has become too systematic among people who hardly know each other, such as in a gym class  or other activity. Feel perflectly free just to say Bonjour tout le monde if you don’t want to do the rounds. If challenged, you can say Je ne suis pas bisous, which roughly means means “I’m not the kissy type”.

The big no-no is kissing anyone apart from your partner on the lips and even on the cheek. It feels so strange to me now that even with my Australian family I just can’t do it and always say We’ll do it the French way. 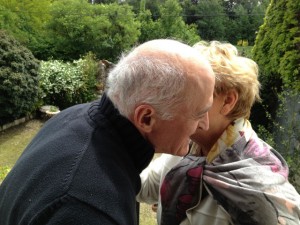 If you’re not sure whether or not you should give someone a bise, you can wait for them to take the initiative if they are older and take the initiative yourself if they’re younger. If they are the same age, you can choose. If you’re hesitating, it’s best to announce what you’re going to do, je vous fais la bise ou je te fais la bise so that the other person knows what’s going on.

A woman can show she doesn’t want a bise from a man by body language – not offering her cheek, extending her hand instead, avoiding eye contact, keeping her distance. A man should respect that.

Children are often taught to give kiss everyone and will sometimes proffer their lips. I personally only told my children to say bonjour verbally because I remember my French tutor at university explaining once how she hated being forced to kiss people she didn’t know as a child.

Another question is health of course. If you have a cold sore (herpes), you should, of course, not have any contact with another person, but I am always surprised to see how many people don’t respect such as simple rule. All you have to say is J’ai un bouton. The same applies is you are sick, including colds. And don’t hesitate to refuse is the other person has the sniffles.

I haven’t touched on la bise in the workplace but I need another post for that!

This entry was posted in French customs, French language and tagged kissing in France, la bise. Bookmark the permalink.