Now you might wonder why I am writing a post about something as basic as bonjour which everyone knows means “hello”.

However, Black Cat and I were having a discussion the other day about WHEN and HOW it is used in French which is quite different from the English use of hello. 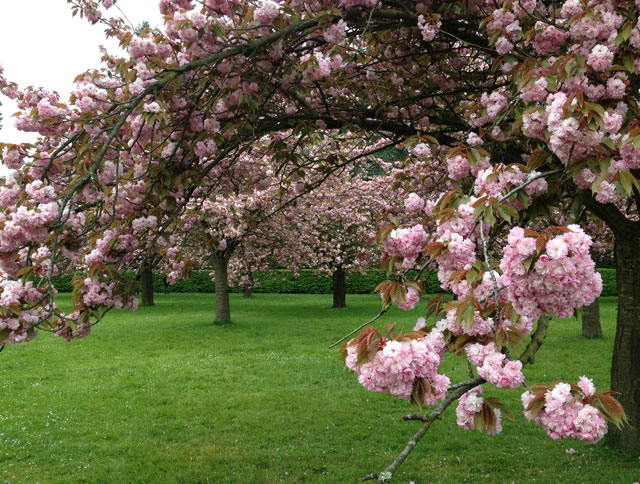 Japanese cherry blossoms at Parc des Sceaux. Absolutely nothing to do with the subject but we finally got there on Wednesday and it was breathtaking so I wanted to share

Now, if I do that in France: “Excusez-moi de vous déranger, mais savez-vous où se trouve le café?“, I am likely to get a nasty look. The person will say, “Bonjour” and wait for me to reply “Bonjour“, then I have to ask the question again and will get a helpful answer.

If you go into a bakery or a butcher’s shop or even a doctor’s surgery, you should always say bonjour to the people present, and it’s even more polite to follow it with messieurs, or mesdames or messieurs dames depending on who’s present. You can also walk in and say messieurs dames without bonjour. 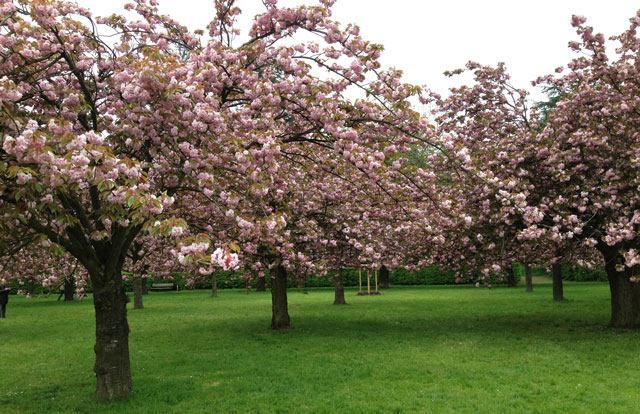 Just one tiny section of the Japense cherry tree grove

There is no equivalent to our good morning or good afternoon . Bon matin doesn’t exist, although bon après-midi  does (or bonne après-midi because après-midi is one of the rare words that can be both masculine and feminine and keep the same meaning) but that is something you say on leaving and  it means “have a good afternoon” which, of course, is quite different.

You can start saying bonsoir instead of bonjour from about 5 or 6 pm onwards, particularly when it’s dark in winter. Bonne nuit is only used when someone is going to bed.

So if bon après-midi means have a “good afternoon”, how to you say “have a good day?” The answer is bonne journée, as opposed to bonjour because the ée ending indicates something that is ongoing. Very occasionally, you might hear passez une bonne matinée (have a good morning) but never bonne matinée by itself ! Bonne soirée means have a good evening (or what’s left of it). Saying Au revoir. Bonne journée when you leave a shop will be very much appreciated. 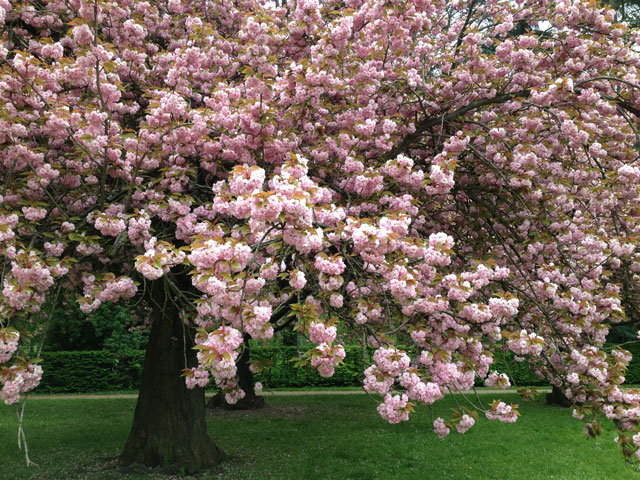 Every morning when I wake up (provided we wake up at the same time) Jean Michel wishes me bonne journée. I really miss it when he gets up before me. Just before we begin to watch a film at the cinema, he says bon film and at the beginning of a holiday or weekend, he says bonnes vacances  or bon weekend.

Now what about salut? This is an informal way of saying both hello and goodbye and is not used to greet the butcher, for example.

Another thing while we’re on the subject is introducing yourself. If you’re invited to dinner and there are people you don’t know, it’s perfectly acceptable to shake their hand and say, “Bonjour, je suis David“, but it’s practically unheard of to give your name otherwise unless asked.

For example, when I wasn’t strong enough to help Jean Michel get a very heavy wardrobe up the front stairs once, he went looking for help and found a man picking up his son from a birthday party next door. Neither he nor the man introduced themselves and to this day, we still don’t know his name. That, in France, is perfectly normal, but would be considered very rude in Australia.

And, I nearly forgot: you only say bonjour once to the same person the same day. After that, you say rebonjour et even just re!

I’d be interested to hear other people’s experience under similar or different circumstances.

If you want to know how to pronounce bonjour and salut, there’s a great You Tube video by French Sounds.

Next Friday: s’il vous plaît which also holds some surprises!

This post is part of Lou Messugo’s All About France montly blog linky. For other posts on France, click on the link.