Last week, I talked about the use of bonjour in French. This week, I want to comment on another very common expression – s’il vous plaît (or s’il te plaît in the familiar form). It literally means “”if it pleases you but, like bonjour, it is not necessarily used under the same circumstances as please.

To start off with, the so-called magic word is not used as frequently in French as it is in English. A child asking for an ice-cream should say s’il te plaît maman or s’il te plaît papa. However, if he is asked if he wants an ice-cream, the answer is more likely to be oui, je veux bien and not oui, s’il te plaît. This is particularly so in the case of adults who would never say oui, s’il vous plaît but simply oui or oui, je veux bien when offered something to eat or drink. Veux is from the verb vouloir “to want” so je veux bien literally means “I want well” and is not directly translatable.

If you want to ask someone politely to help you do something, you’d say est-ce que tu veux bien m’aider and not aide-moi s’il te plaît which is much more abrupt and corresponds more to “help me, will you”.

The very frequent “yes thanks” used in English is not possible in French. You can say non, merci or just merci WHICH MEANS NO unless the context indicates otherwise, but never oui merci. I can remember when my father was in France once and we went to visit friends who didn’t speak English. He understood he was being asked if he wanted a beer and replied merci. I decided not to say anythng until he expressed surprise at not being given anything to drink!v

You’d never see a sign saying S’il vous plaît, ne mangez pas dans le bus instructing people not to eat in the bus but Veuillez ne pas manger dans le bus, veuillez being the polite command form of the verb vouloir mentioned above, which isn’t translatable either. It very roughly means “would you”. You’ll see veuillez in several contexts such as Veuillez faire l’appoint which means that you should give the exact change.

In Belgium and in the north of France, s’il vous plaît is also used when someone gives you something. For example, a waitressr will say s’il vous plaît when she sets down your plate in a restaurant. It is also used instead of je vous en prie (you’re welcome, literally I pray you) in response to thank you. 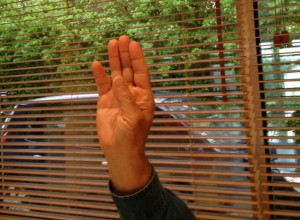 And while we’re talking of restaurants, you can use s’il vous plaît to attract the attention of a waiter, raising your hand at the same time with your fingers together (as opposed to apart when you wave).

Do you know of any other differences between the English use of please and French use of s’il vous plaît?