Once our accommodation and washing were sorted out, we were able to forget the hassles and get on with our holiday. Szentendre, the village where we are staying, is only a half an hour’s drive from Budapest – not a very scenic route admittedly, but a very convenient location if you don’t want to stay in the city.

Margit Bridge or the yellow bridge as I dubbed it

Parking in Budapest is more problematic as we have only found one underground parking lot so far and our GPS had a hard time finding the entrance. However, street parking is quite easy to find, mainly because it’s relatively expensive at 440 florints (1.50 euros) an hour and limited to 3 hours. 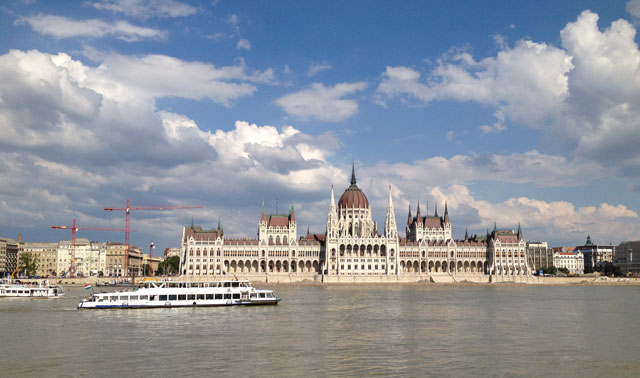 Budapest, as you may know, is the unification of two towns, one on either side of the Danube – Buda on the west bank and Pest on the east – connected by Széchenyi Chain Bridge. Not that I know how to pronounce it. In fact, the Hungarian language is a great difficulty for me. I can’t remember simple things such as hello, goodbye, please and thank you because they won’t stay in my head. So I nod and smile a lot. 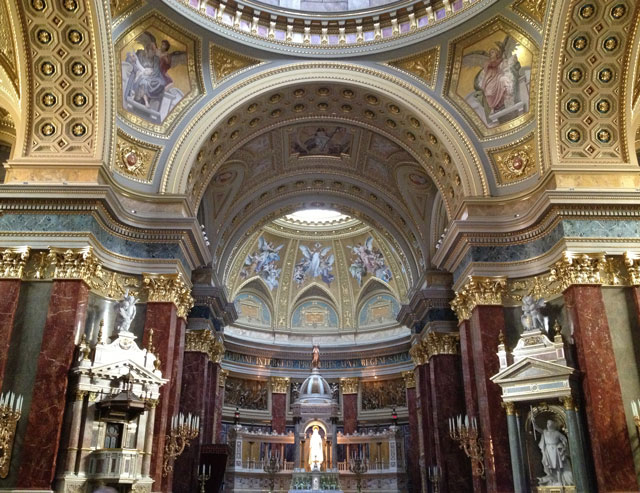 We started our visit of Budapest in Pest, simply because that is where the guide book began. We walked halfway across the yellow bridge (actually the Margit Bridge) and looked across at the iconic Gothic Revival Parliament building which, like a lot of Budapest, is undergoing renovation. 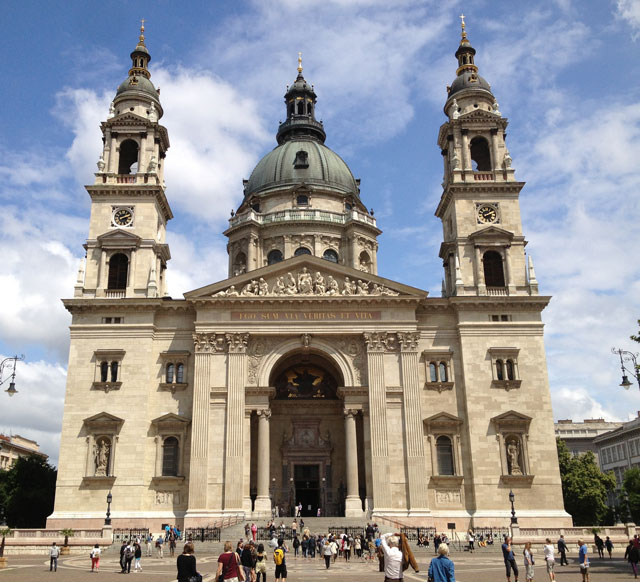 We visited Saint Stephen’s Basilica (also called Cathedral), the largest church in the city which can hold up to 8,500 people and was completed in 1906. 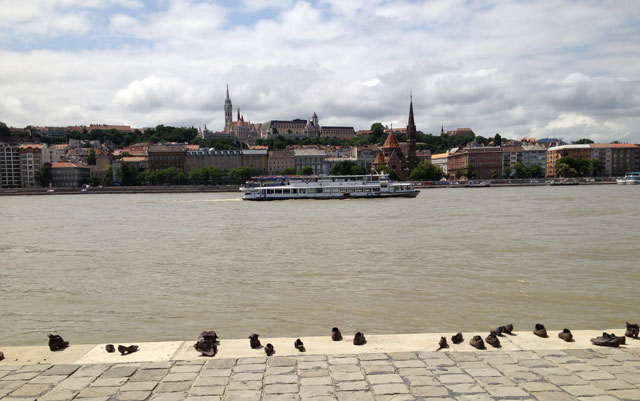 This was the saddest thing we saw in Budapest. The Shoes on the Danube Promenade is a memorial concept by film director Can Togay and was created by him and the sculptor Gyula Pauer on the bank of the Danube River in Budapest. It honors the Jews who were killed by fascist Arrow Cross militiamen in Budapest during World War II. They were ordered to take off their shoes, and were shot at the edge of the water so that their bodies fell into the river and were carried away. 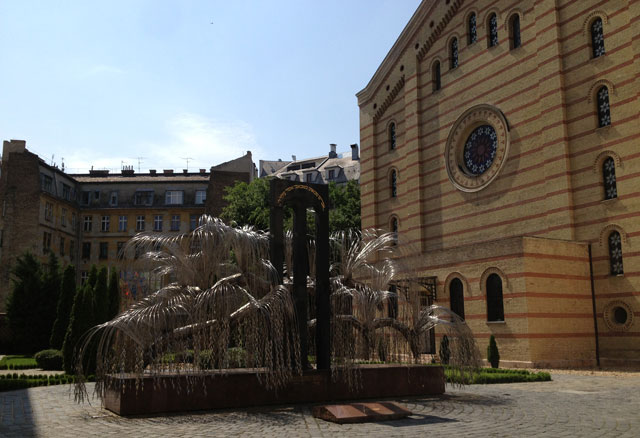 Another Jewish memorial in front of the main synogogue decicated to the 600,000 Hungarian Jews who perished under the Nazis. 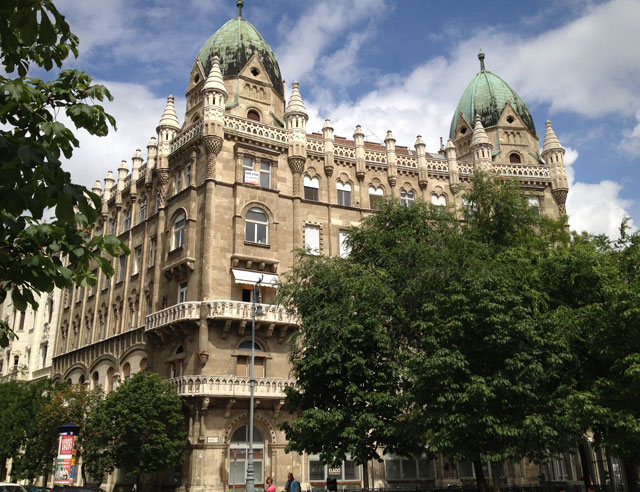 One of the many large ornate buildings in Budapest that have been renovated, on Szabadsag Ter, the largest and most representative square in downtown Budapest. 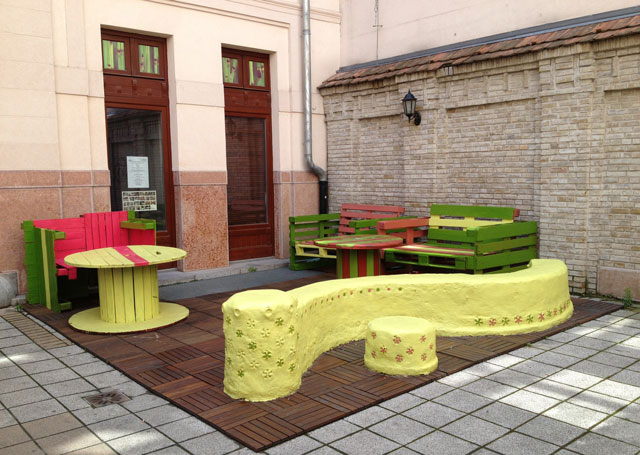 A wonderful example of recycling

I thought this was a wonderful example of recycling in the Jewish quarter of Budapest which still has many dilapidated buildings. 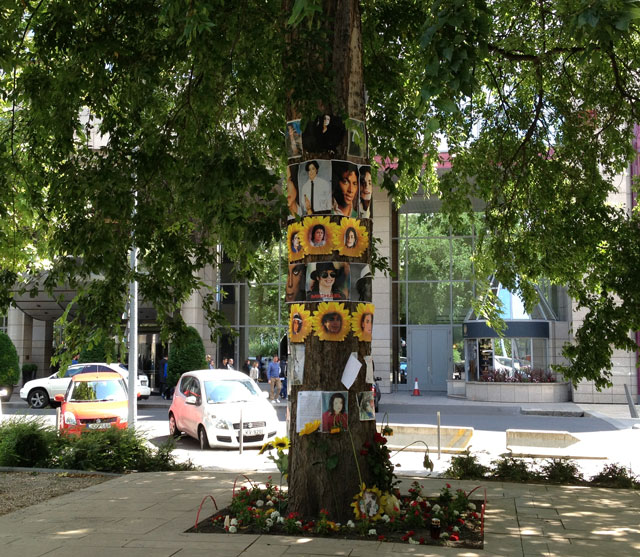 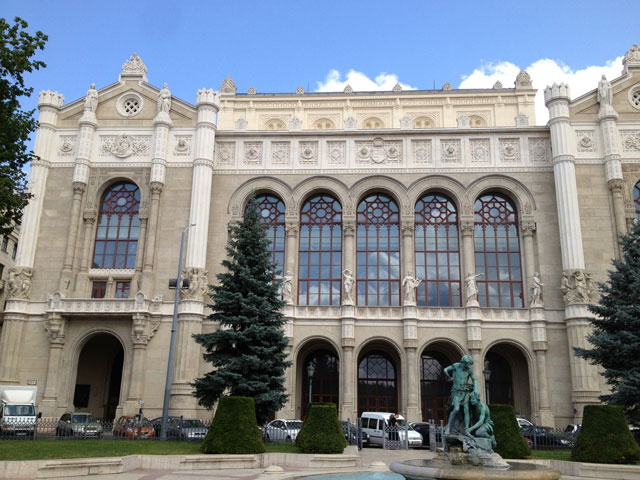 Gresham Palace, a beautiful example of art nouveau architecture  in the manner of the Vienna Seessionists, now the Four Seasons Hotel. 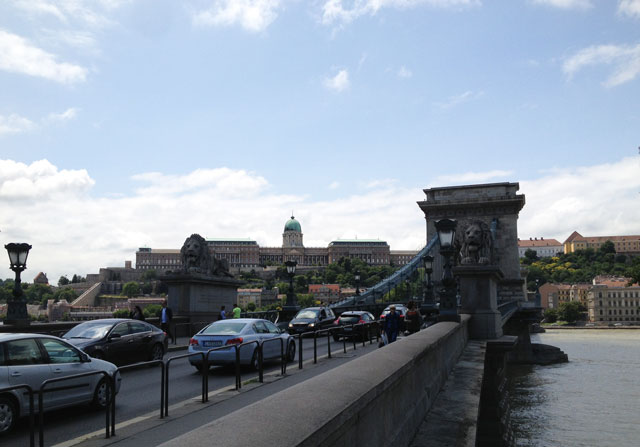 The Széchenyi Chain Bridge, inaugurated in 1849 and the first bridge to connect up Buda and Pest. The architect is said to have committed suicide when he discovered the two lions had no tongues. 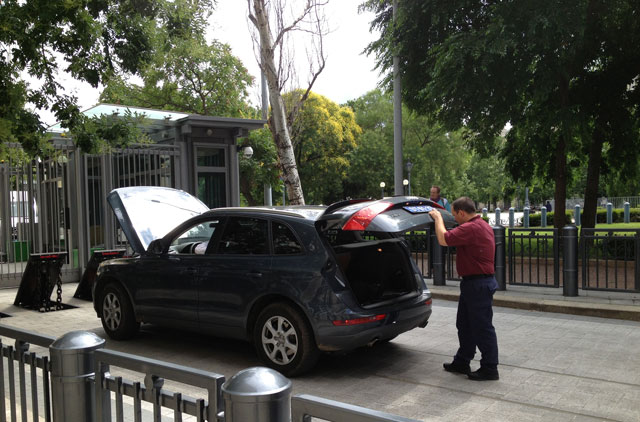 An amazing security check on vehicles entering the Bank of Hungary. The security guard walked around the car with a large mirror on a stick so he could look underneath! 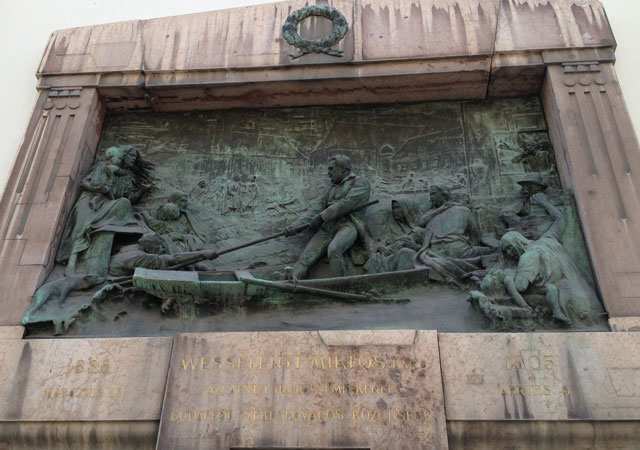 A plaque commemorating a previous flood

2013 is not the only time that the Danube has overflowed its banks and flooded the city.  This plaque commemorates a previous flood in 1838!

11 Responses to Budapest – Pictures of Pest