Posted on September 29, 2013 by Rosemary Kneipp

Having walked our feet off exploring Sofia in the morning, we’ve come home to recuperate. After a couple of hours, I notice a leaflet on the dining  table of our home exchange hosts advertising free English-speaking tours  of Sofia every day starting at 11 am and 6 pm and lasting around 2 hours. It’s 5 pm, so I suggest we join a tour since we don’t have to reserve in advance. I can translate for Jean Michel if necessary. 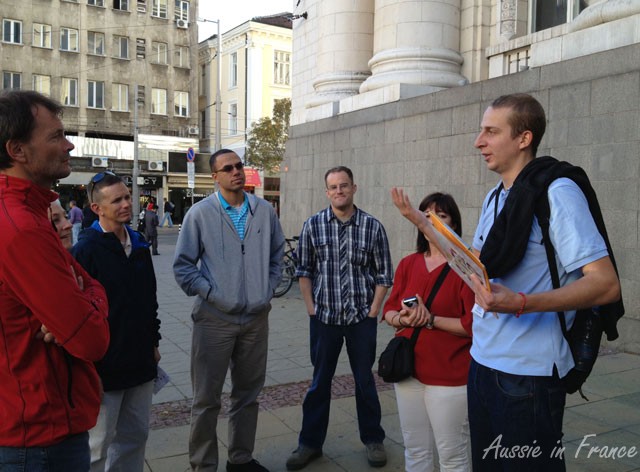 Martin at the start of the tour, greeting each person as they arrive

When we arrive at 5.50 pm there are three other people waiting. Martin Zachev, a gregarious and larger-than-life Bulgarian from Free Sophia Tour, arrives and introduces himself. By the time he has finished his little speech, there are over 40 of us from an impressive number of countries, including Latvia, the Netherlands and Spain, each of whom he has greeted personally. 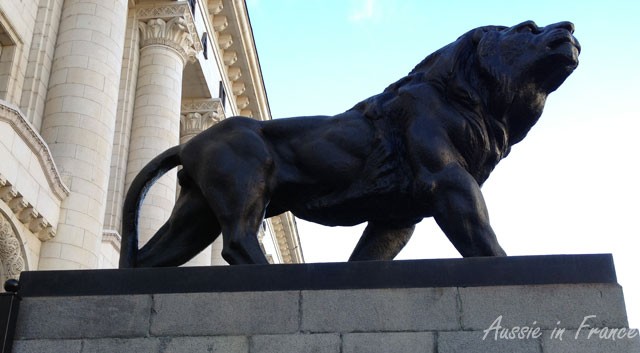 The lion with the non-physiological legs

The first point of interest is a statue of a lion just above our meeting place at the corner of the Law Courts. Offering a traditional Bulgarian sweet as an incentive, Martin asks what’s wrong with the lion. It turns out that its legs, which should be diagonally in sync, are not, and he demonstrates what would happen if it tried to walk! He also reminds us that the lion is the symbol of Bulgaria. 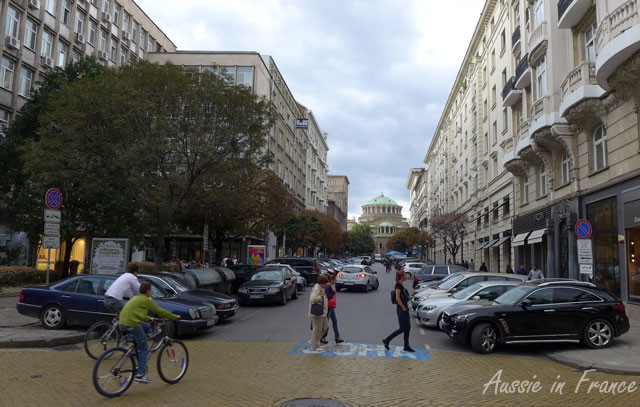 Even the bikes stop for pedestrians in Sofia

When we cross the road, we learn that drivers can lose their licence for six months if they hit a pedestrian. We have noticed how Bulgarian drivers stop for us even when we aren’t on a pedestrian crossing. Now we know why! 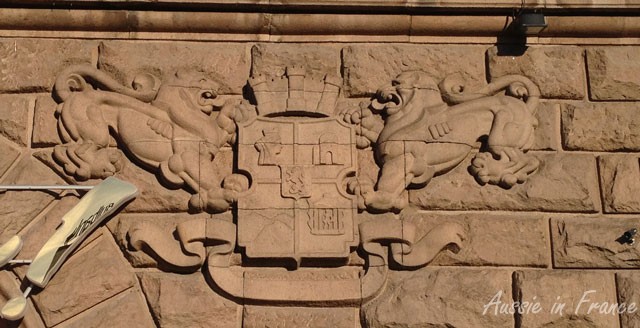 The coat of arms of Sofia

We stop in front of the coat of arms of Sofia in front of the Sheraton Hotel, a shield divided into four. On the upper right quarter is the church of St Sofia which gave its name to the city (sofia in Greek means wisdom), on upper left is a humanised picture of the ancient town of Serdica (Sofia’s Roman name), on the lower right is a golden canopy and a statue of Apollo Medicus representing the mineral springs found around the city while Vitosha, the mountain just behind Sofia, is on the bottom left. In the middle is a smaller shield with a rampant lion. The motto is  “Расте, но не старее” – “Ever Growing, Never Aging”, though I’m not sure how appropriate that is! 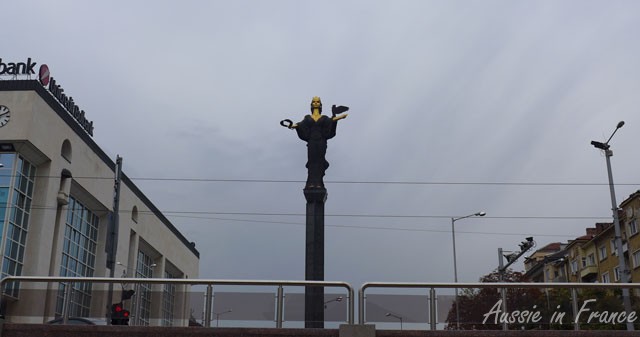 The erroneous statue of Sofia

Martin then points out the recent statue of Sofia we have already seen before and explains that the people who erected the statue actually made a mistake. They didn’t realise that the town is called after the church of Hagia Sofia (Holy Wisdom) and not the saint called Sophia. Many churches in Eastern Europe are called St Sofia, but in fact, they are all Holy Wisdom. 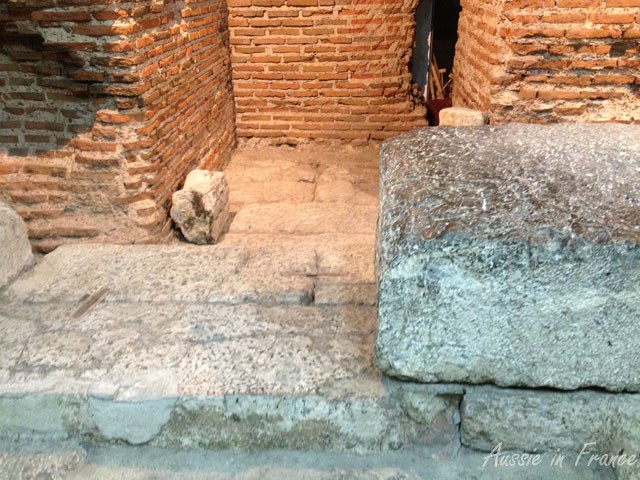 He then takes us down a staircase and we find ourselves on the old Via Romana with its large flat stones that have come through the ages much better than the modern footpaths. We’re at the former eastern gate of the city of Serdica. 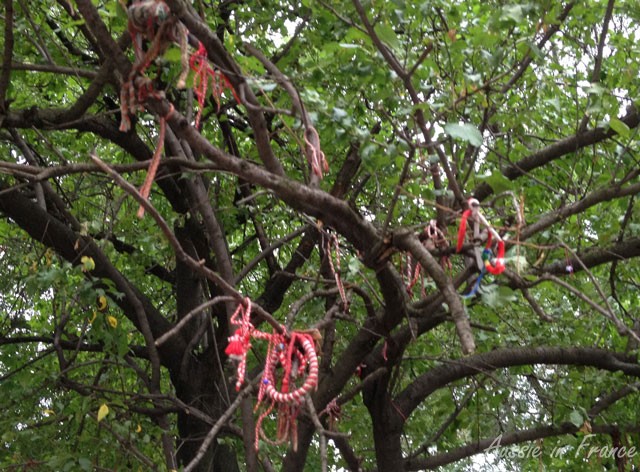 A little late, bending down under a tree, he shows us that it is covered with red and white braided bracelets. On 1st March, it is the tradition to give people martensita, in honour of the end of winter and coming spring. You wear the bracelet until you see the first budding tree and hang it there to bring luck and a productive spring and summer. There are several regional variations that you can read more about on the Study English Today website. 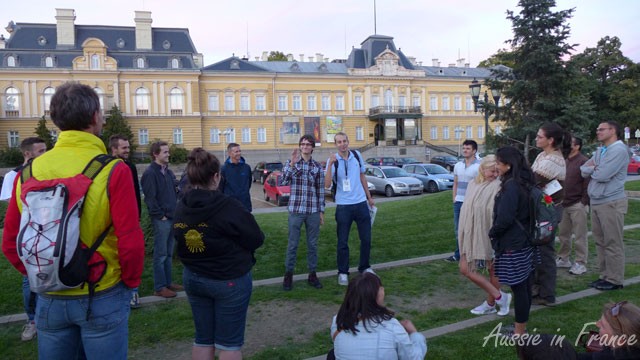 We all sit down on the grass opposite the Tzar’s Palace and Martin asks for six volunteers – an Austrian prince, a German prince, an Italian princess, a Bulgarian, a communist and another Bulgarian. He then very cleverly demonstrates the recent history of Bulgaria showing how various people have been thrown out and reinstated up until the present day. 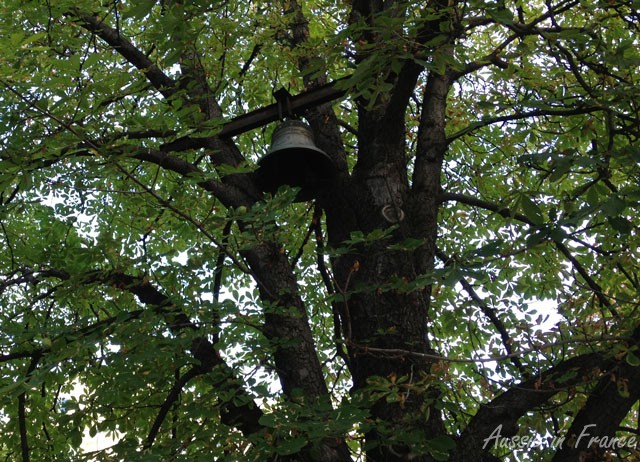 The church bell in the tree opposite Hagia Sofia

Our last stop is the church of St Sofia which stands on a mound that people could see from afar. As they approached the city of Serdica, they would say There’s Sofia, which is how the name of Sofia came to be used instead of Serdica. In those days there were no bell-towers so the bell was erected in a tree opposite the church. Well, that’s what I understood anyway. 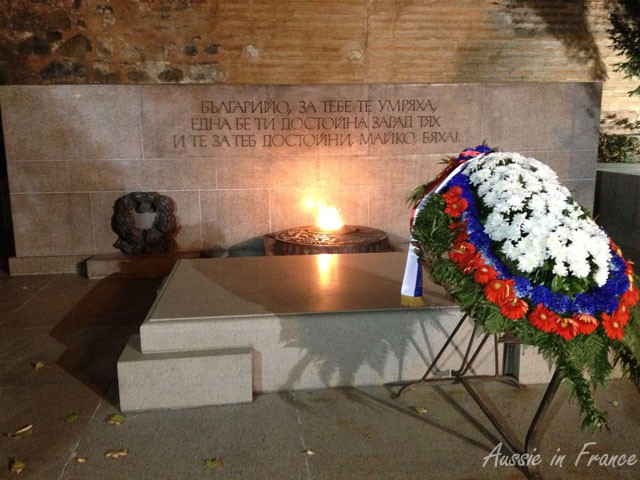 The eternal flame at the Monument  to the Unknown Soldier

We finish the tour in front of the Monument of the Unknown Soldier to commemorate the hundreds of thousands of Bulgarian soldiers who died in wars defending their homeland, and more lions symbolising Sofia. We feel that Martin’s tour has rounded off our visit of the city well and are ready for Rila Monastery next day.

N.B. These are not all the places that Martin took us to, but I have already described the others in previous posts.

5 Responses to Our Free Sofia Tour