Apparently fried onion rings are an important part of Thanksgiving in America but most people buy them in cans which I can’t even begin to imagine. It would be like buying tinned battered fish surely. But I checked it out on the Internet and would you believe it, one of the popular brands is called French’s and they are called French fried onions which I have never seen in France …

I got the Thanksgiving information from the Bread is Pain Food blog but more importantly, I also learnt how to make them. Now in the past, this is not the sort of thing I would have even thought about making because of the calories. However, now that we practise intermittent fasting, I don’t have any qualms.

I want to give Jean Michel a surprise which is easier in a large house than in an apartment. He’s in the workshop trying to flush out the sludge from our in-floor heating system which has not been working very well this winter. 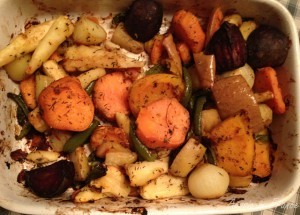 I’ve already prepared the baked vegetables – potatoes, sweet potatoes, sliced green pepper, parsnips,  butternut pumpkin and beetroot. Yes, beetroot, bought raw and baked. I’d never heard of it until I had lunch at Susan and Simon’s from Days on the Claise. Delicious.

I’ve sliced the onion (you only need one for two people) and beaten the egg yolk and milk together in a soup plate. Bread is Pain’s recipe helpfully says “a little milk” so I put the equivalent of an egg yolk. I’ve put flour in another plate. 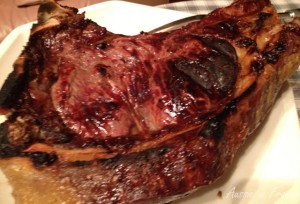 As soon as I hear Jean Michel raking the embers in the fireplace upstairs  in order to grill the côte de bœuf, I put a centimeter of oil in a deep frypan (sauteuse) and turn on the heat.  I dip the onions in the egg mixture and then roll them in flour after which I put everything in a zip lock bag and shake to get rid of any surplus flour as per Bread in Pain’s recipe.

When the oil is hot (I test with a small onion ring to see if it sizzles), I add a layer of rings to the pan. I turn them over and start to get a bit worried. They do not look like the photo in the recipe. I turn them again and lo and behold, they are starting to be golden. I had turned them too soon. 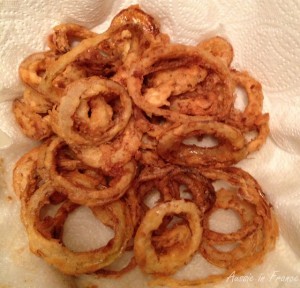 I scoop them all out when they’re done and put them on a paper towel then proceed with the next batch. This time, I am more expert. I try one. Out of this world! When they are all done, I take them triumphantly upstairs to an amazed Jean Michel. He doesn’t know they are onions and it takes him a couple to identify what they are!

I had thought they would be a bit greasy and heavy but they’re not. The taste is actually quite delicate. I’m going to make them for Christmas and stun the kids as well.