You know those people who get carried away with new ideas and can’t seem to stop talking about them? Well, I’m one of them. It’s part of my enthusiastic nature I guess. For the more naturally cautious – like Jean Michel! – it can seem a bit overwhelming and give the impression that I have no discernment. 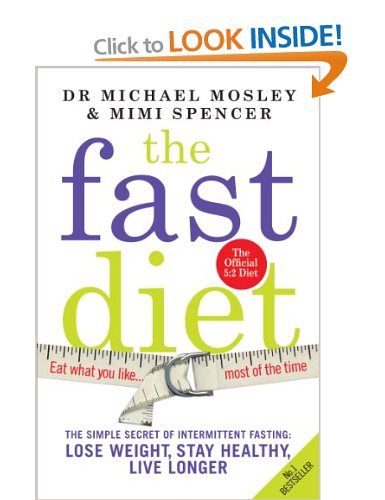 But I do! So be reassured. I have given due thought to what I am about to embark upon.

Last week, I told you about Dr Saldman’s natural appetite suppressants. The second chapter is about stimulating your organism. First he talks about the importance of physical exercise – no breaking news there – followed by a section on fasting, intermittent fasting, to be more precise.

Back in the days of cavemen, our ancestors had to face periods during which they didn’t have enough food so our body is programmed to draw from our stored fat when we don’t eat. Intermittent fasting is based on this principle.

When I posted about appetite suppressants, I got a lot of clicks from a site called 52fastdiet.co.uk, so I went and had a look. What I discovered set me thinking. First I watched a BBC TV programme called Eat, Fast and Live Longer. Then I bought the book written by the author of the programme, Dr Michael Mosley, and a nutritionist called Mimi Spencer The Fast Diet, the simple secret of intermittent fasting: lose weight, stay healthy, live longer.

I’m obviously not going to condense an entire book and a one-hour TV programme into a short post. The idea is that you can lose weight (and considerably improve your health in relation to diabetes, cholesterol, heart attacks, cancer and many more) by eating normally for 5 days a week and fasting for two non-consecutive days. Once you reach your ideal weight, you can reduce the fasting to one day a week.

Fasting technically begins when you haven’t eaten for 6 hours. Fasting in Michael Mosley’s programme means consuming about 25% of your normal calorie intake i.e. 500 calories for women and 600 for men, during a 24-hour period, usually in one or two small meals, with lots of non-calorie fluids throughout the day (water, tea, coffee without milk or sugar obviously).

I find this much more appealing than having to continually limit my calorie intake every day for the rest of my life! During the diet that led to my losing 20 kilos eighteen months ago, I changed my eating habits and totally stopped snacking.  For a year, my weight stabilised, then 5 kilos gradually crept back on.

It was very discouraging because I don’t ever snack, but it’s not always easy to regulate meals, particularly going back and forward between two houses . We began having a glass of wine with our meal more often and an aperitif a couple of times a week. After working in the garden or cycling, we’d have a couple of biscuits with our tea.

I went back to my initial diet two or three weeks ago and the weight has been slowly coming off but I feel deprived and, in particular, not very enthusiastic about having to watch my weight all the time.

I was slightly hesitant about the idea of skipping meals because I have always been told that your body then goes into fast recovery mode and stores more fat for the next missed meal. However, both Dr Mosley and Dr Saldman assure readers that fasting does not have that effect.

So yesterday, I went on my first fast. I had breakfast about 7.30 am (a boiled egg, yoghurt, fromage blanc and a small glass of orange juice). As I had slept badly the night before, I decided to have a short nap about 12.30 and woke up two hours later! I didn’t feel at all hungry but at 3 pm, I decided to have a small serving of cooked octopus, a little oil and some spinach to make up my 500 calories as I had to drive over the other side of Paris and back and was worried about being hungry while stuck in peak hour traffic.

In the evening, Jean Michel and I went to the movies so that we wouldn’t think about food. He had been to a retirement party at work at lunchtime so was happy to skip dinner as well. I didn’t start feeling hungry until about 11.30 pm, and even then, I felt a little lightheaded rather than hungry but the sensation disappeared and I went to sleep.

During the night however, I up woke several times (as I always do), but each time with a headache. I finally took some aspirin but when I woke this morning at 6.30 am, the headache was still there so I decided to get up and have breakfast. Surprisingly, I didn’t feel particularly hungry. The headache disappeared after I had eaten. It seems it may have been due to dehydration, though I thought I was drinking a lot of water.

At lunchtime, I couldn’t eat the amount of food I usually do and it was the same at dinner. I certainly didn’t feel like eating anything extra. I’ve scheduled my next fast day for Monday. Anyone else willing to give it a try?

Other posts on dieting

22 Responses to Intermittent Fasting – for better health and less fat!