This week’s Blogger Round-Up is a spin-off from my post on the disappearance of père de famille. Bellanda from Bellanda in Paris tweeted a post explaining that women are now legally allowed to wear overalls in France, while Tim from Invisible Bordeaux responded with a famous example of an exception to the rule – Rosa Bonheur. On another fun note, Chrissie from The Riviera Grapevine shares a great party trick that involves bubbly. Enjoy!

It’s no longer a joke! My overalls were not only illegal in Paris … they were illegal in all of France! 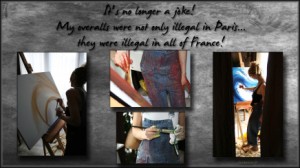 The last several months, I have been joking that wearing my overalls in Paris might be considered illegal. Little did I know how right I was!

Ever since that very first day I ventured out into the streets of Paris wearing overalls, there has been ongoing banter on Twitter and Facebook about the fact that this could possibly be illegal.  There were some of you who gasped with laughter saying, “No, you didn’t?”  There were others who said things like, “Good for you!  Be yourself and be proud.”

In my defense, and yes, I somehow think wearing overalls… more exactly wearing paint stained overalls in a city where people only wear jogging/sports attire if they are actually running, does indeed need defending.  Read more

by Tim Pike, an Englishman in France who, when not writing Invisible Paris can often be spotted riding a vintage yellow bicycle or strumming a guitar. He has also conceived a set of self-guided walking tours around Bordeaux which are available for iDevices. 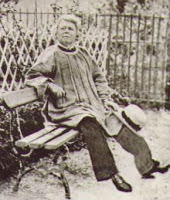 One of the most illustrious of Bordeaux’s daughters is Rosa Bonheur who, throughout her life which spanned much of the 19th century, became a world-renowned “animalière” and is regarded by many as the most famous female painter of her time.

Rosa Bonheur was born Marie Rosalie Bonheur on March 16th 1822 at 29, Rue Saint-Jean-Saint-Seurin (now  55, Rue Duranteau) in Bordeaux. Her father, Oscar-Raymond Bonheur, was a landscape and portrait painter and frequented Spanish artist Francisco Goya during the four years the latter spent in Bordeaux up until his death. Read more 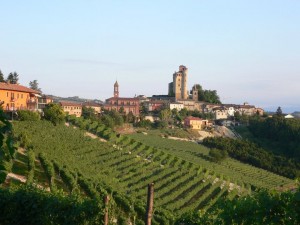 Recently, whilst indulging in a spot of social media browsing, I came across this gem of a YouTube clip shared via LinkedIn, Google+, Facebook, Twitter or some other format which all us members of the bloggersphere should apparently be mastering for self promotion!

Now, this is one party trick that I think would seriously impress. Opening a bottle of bubbly with the glass that you’ll serve the liquid in! Class. Especially with a certain nonchalance as conveyed by the guy in this clip. Surely this is a more realistic skill to master than learning how to saber a Champagne bottle with a sword?

Yet I know I could never pull it off. I’d shatter the delicate glass on impact, like a magician who fluffs his tricks. Read more