Early Spring and Ponderings on our New Life

It’s been the strangest winter. I don’t think the temperature has gone below zero more than a couple of times and there has been absolutely no sign of snow. As a result, spring seems to have come a couple of weeks early. 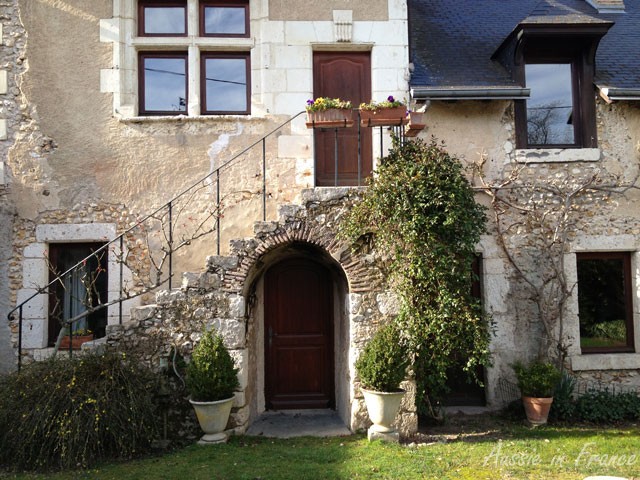 Our house at the moment, with pansies and bulbs on the railing, the last of the winter jasmin on the left and our evergreen honeysuckle on the right.

We are in Blois for a month this time, the longest period yet so it feels more permanent. Things are starting to get more organised but I’m still finding it hard to reconcile my translation work and doing more interesting things such as gardening. 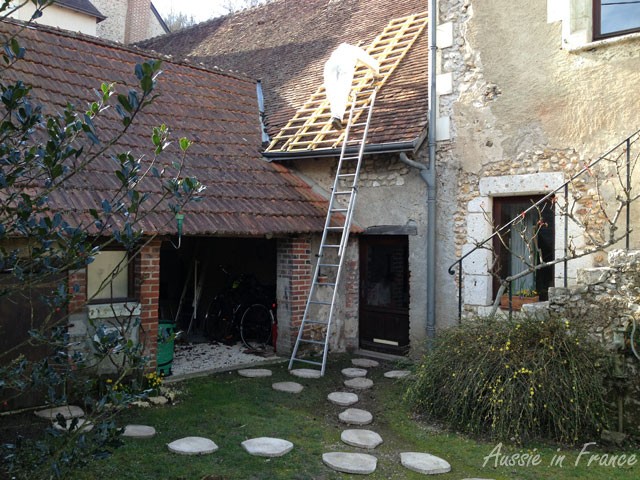 Jean Michel cleaning the moss. Our new paving stones are waiting to be made flush with the ground.

Also, having one person working and the other free to do what he wants with his time is not easy. Not that Jean Michel is lazing around – quite the opposite. Among other things, he has chopped firewood, completed the electricity in our upstairs kitchen, made two roof ladders and cleaned the moss off one of the roofs. 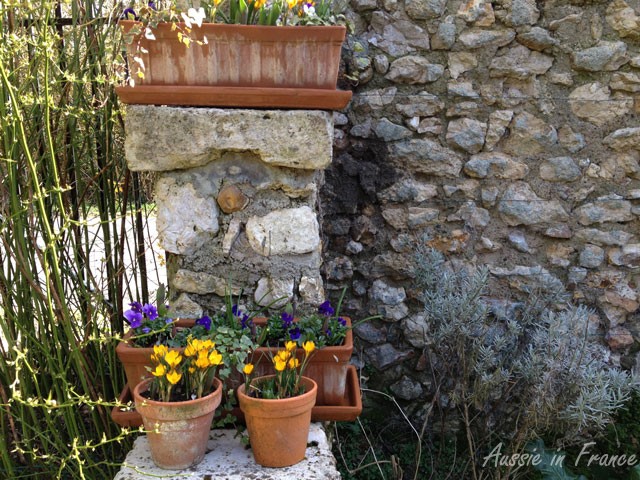 Crocuses and pansies against the front fence

But we are having to adjust to a different pattern. In Paris, Jean Michel gets up earlier than me during the week – often around 7, and has his breakfast alone. I get up around 8.30, get dressed, have a quick breakfast and am in my office by 9. 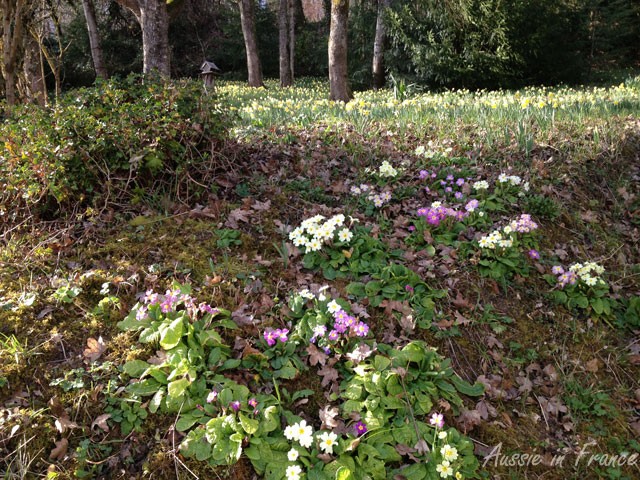 Primroses on the way up to our little wood

Here, if we get up at 8.30, I’m not sitting in front of my computer until closer to 10 because Jean Michel needs to take his time in the morning. I’ve been making an effort to get up at 8 but I only gain a half an hour and I’m tired! On intermittent fast days, it’s much easier as we skip breakfast. We’ve talked about it together and Jean Michel is also frustrated because he is a morning person and has the impression that he’s wasting his whole day if he doesn’t get up until eight (but he hasn’t suggested getting up earlier). 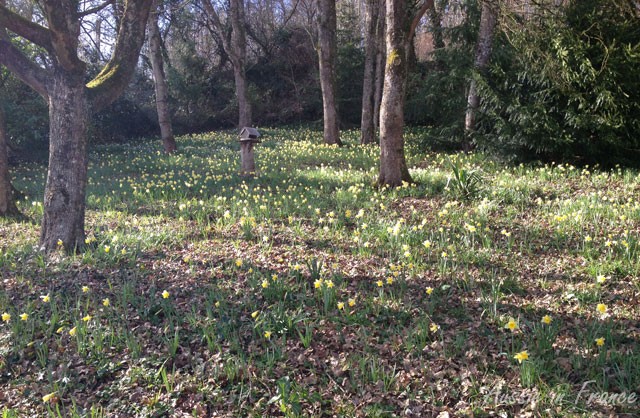 Our little wood full of daffodils

So I’m trying to schedule our two fast days for Monday and Friday and maybe I won’t eat on Wednesday mornings either. Then on the other two days, as soon as I’ve finished my breakfast I’ll leave him to it instead of taking time over tea together. The weekend’s not a problem of course. 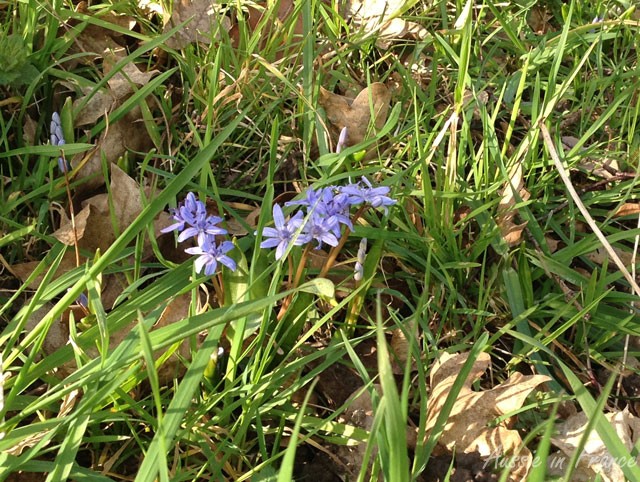 Jean Michel also has a short nap after lunch and goes to sleep before I do at night, so all in all, I’m not getting enough sleep, and am exhausted! I hope we’ll have solved the problem soon. At least having a whole month in Blois means that we can get into better sync before the final move in October. 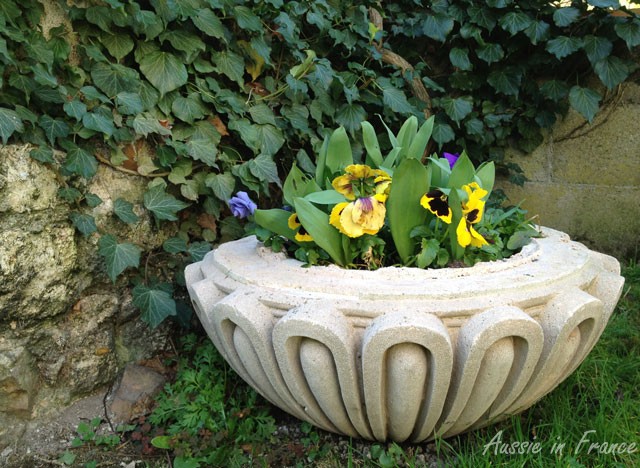 The fact that it rained most days last week didn’t help either. We were nice and wet by the time we finished the market on Saturday morning then spent the afternoon chasing after things like bottle racks and mats to scrape the mud off our shoes. By that evening we were feeling a little jaded. 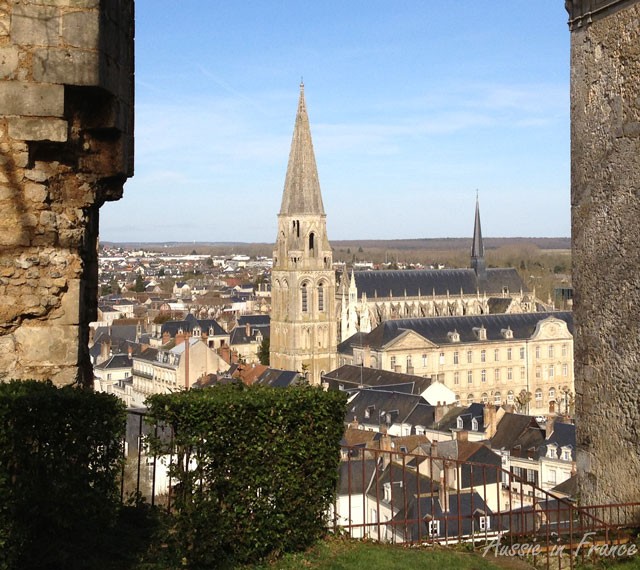 However, Sunday dawned fine and sunny and after a leisurely breakfast, we drove to Vendome which is really pretty. Clouds came over around midday, to our disappointment. But by the time we had finished a very good lunch at Le Rond de Serviette, the sky was blue again and we walked up the hill to see the stunning panorama. 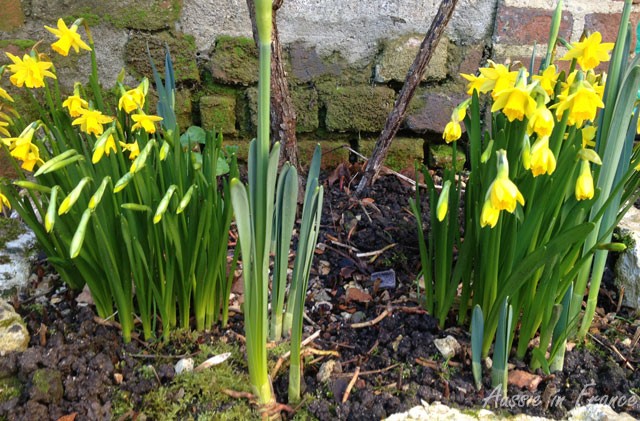 We arrived back home just in time for a late tea and macarons in front of the fire. It felt as though we were on holidays because it’s exactly the way we used to spend the day when we stayed in a gîte with a fireplace in winter before we bought Closerie Falaiseau. 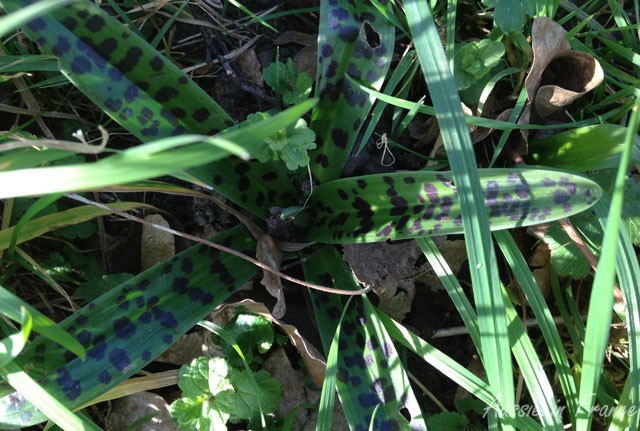 Our local orchids are looking good. They’ll bloom in April.

Oh, and I nearly forgot – the annoying neighbours with the poultry yard have packed up, lock, stock, barrel and chickens. We couldn’t believe our luck! We expect that someone else will move in soon, perhaps at the end of the month. Let’s keep our fingers crossed.

This entry was posted in Closerie Falaiseau, Flowers & gardens, Lifestyle, Retirement, Uncategorized and tagged adjusting to retirement, spring in the Loire Valley. Bookmark the permalink.

6 Responses to Early Spring and Ponderings on our New Life