Se rappeler and se souvenir are almost complete synonyms. I can’t really think of any occasion on which one can’t replace the other.  However, there is a grammatical difference which fewer and fewer people observe these days. Se rappeler takes a direct object and se souvenir doesn’t. So what does that mean? 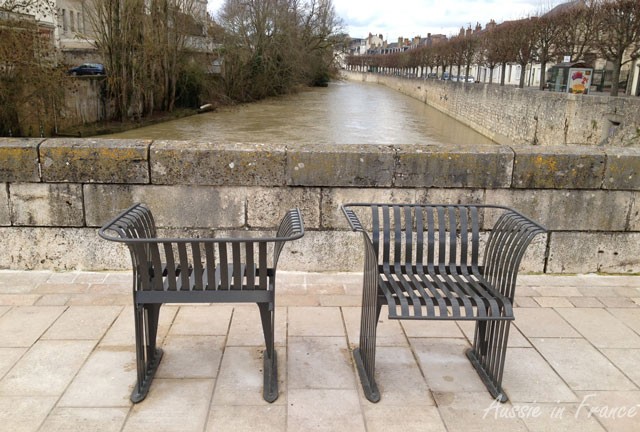 A pair of chairs in Vendôme – nothing to do with memory but I like the photo.

The difference is that little “de” which most people also tack on to se rappeler.

I remember him = Je me le rappelle OR Je me souviens de lui. But, you mostly hear Je me rappelle de lui which is totally incorrect.

I try to remember not to use “de” with se rappeler but when everyone else around me is using it without the slightest hesitation, it’s not easy because it sounds odd. So I usually use se souvenir!

You can use rappeler without the reflexive, but not souvenir.

Tu me rappelles ma tante = You remind me of my aunt.

Cela ne vous rappelle rien ? = Doesn’t that remind you of something?

Rappelez-moi votre nom = [Literally:  remind me of your name] and really corresponds to “Sorry – can you tell me your name again” which is a VERY useful phrase to know if you forget names the way I do.

Another verb that can also be used for “remember” is penser à.

Tu me fait penser à ma tante = You remind me of my aunt.

Cela ne vous fait pensé à rien ? = Doesn’t that remind you of something?

Fais-moi penser à rappeler mon frère = Remind me to ring my brother back.

Which reminds me that rappeler has another meaning i.e. to call back, where the “r” is like “re”, widely used in French to mean again.

Ses affaires l’ont rappelé à Paris = He was called back to Paris on business.

Ma mère a été rappelée au chevet de mon grand-père malade = My mother was called back to my sick grandfather’s bedside. [which is interesting because a chevet is a bedside table).

Souvenir is also a noun of course, with the meaning we know in English, as in souvenir shop.

But its main meaning is “memory”.

Elle a gardé de lui un bon souvenir = She has good memories of him.

Je n’ai qu’un vague souvenir de l’incident = I only have a vague recollection of the  incident.

Il m’a raconté ses souvenirs d’enfance = He recounted his memoires of his childhood.

But isn’t mémoire a French word, I can hear you saying. Doesn’t it mean memory? First, it can’t be used in any of the above examples. Souvenir is used when it means “something remembered” while mémoire is used when talking about what our brain does.

Elle a une bonne mémoire = She has a good memory.

Il a une mémoire d’éléphant = He has a memory like an elephant.

A very useful little phase is pour mémoire which means “as a matter of interest”, “for the record”, “in passing” e.g. Mais tout indique que le sujet n’a, en fait, été mentionné que pour mémoire. = But everything would indicate that the subject was, in fact, only mentioned in passing.

Mémoire is also the term used for a computer memory.

And just to make matters easy, there is a another word mémoire, but this time it’s masculine and it has a completely different meaning!

It can be used for a memorandum, a report, a statement of all the money owed by a customer to a company (you probably don’t need to remember that!), someone’s memoirs and, most importantly for me, a master’s thesis or dissertation.

For about six years during my career as a university lecturer, I was in charge of the dissertations at ESIT and I could never remember whether the word mémoire was masculine or feminine! I devised all sorts of strategies so I wouldn’t reveal my lack of certainty! For example, instead of saying “Son mémoire est en retard” (her dissertation is late), I would say “Elle a dépassé la date limite” (she’s gone over the deadline).

This entry was posted in French language and tagged Friday's French. Bookmark the permalink.