Universities in France and Australia

Posted on December 2, 2011 by Rosemary Kneipp 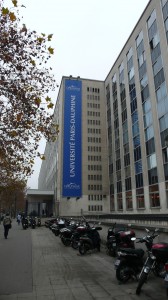 When I enrolled at Dauphine University in Paris to do my post-graduate translation diploma at ESIT many long years ago, I was rather shocked at the environment. It was located in a  high-rise building (and the toilets were disgusting). When I started teaching there 15 years ago, it was no better. Only the toilets were slightly cleaner.They finally spruced up the outside and did up the wing I work in and are now renovating the entrance hall. They also refurbished the canteen area a couple of years ago.

I did French honours at James Cook University in North Queensland. It has a magnificent campus practically out in the bush. The wallabies used to come in from the surrounding hills in the evening. The library takes up a whole building. The library at Dauphine takes up one floor and there are certainly no individual desks for the students to work at. During exam periods, you see them all sitting on the floor in the corridors. Our wing is a bit better because we are actually a school within a school and have fewer students. Compared with the Dauphine students, we have luxury surroundings.  At least they don’t have to sit on the floor. 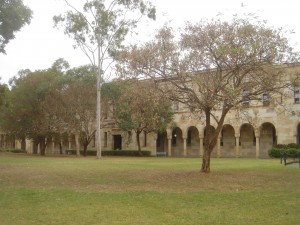 When Black Cat did her first year of post-grad at the University of Queensland a few years ago, she used to skype me from one of the cafés on campus. I couldn’t believe it. At the time, we didn’t even have wifi inside our building. So I campaigned until we got it. A couple of years back, I lectured in terminology and needed an internet connection for the course. I was assigned a lecture theatre in a new area downstairs where the walls were too thick for a wireless connection. I asked for a cable connection and it took THREE MONTHS to get them to connect it during my 1 ½ hour weekly class. They were afraid of the students using it. I couldn’t believe it. OK, ESIT is not part of Dauphine (for historical reasons, we are part of Paris Nouvelle Sorbonne University which is over the other side of Paris) but even so, I thought that was pretty inefficient.

I then pushed to have a room equipped with computers to hold our translation classes. I 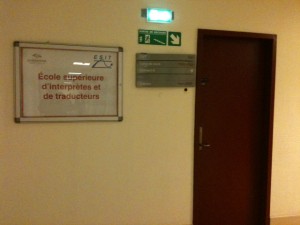 even got the quotes (we’re multi-task here). A computer is a compulsory tool for a translator today, as you may well imagine. It finally happened and I immediately claimed the room before anyone else did. All last year, I was allowed to use it as a special favour because the student security system wasn’t functioning. This year, that problem has been solved but they still haven’t connected up the permanent video projector so I have to count on our somewhat moody technician to set up the laptop and portable projector for me. This involves getting there early and checking that he hasn’t forgotten me. And when he’s not there for some reason, I have to do it myself.

The e-learning platform we’re supposed to use has been down since classes went back in September. Fortunately I have a cluey student who suggested zoho docs so I’m using that. At least I’m sure it’ll work. Whenever I complain and point out that the facilities in Australia are much better, I get the answer that the students are not paying the same fees. They did in my day, but that’s changed now of course. In France, the yearly fees range from 174 to 564 euros (230 to 750 Australian dollars) a year plus compulsory social security which is about 150 euros (200 dollars). I gather the fees are a little higher than that in Australia … President Sarkozy has a big plan to develop university campuses, make each university autonomous and charge much higher fees. This has understandably met with a lot of opposition and the latest news is that two of the universities have gone broke. Haven’t noticed any campuses yet.

Ah well, only another semester to go because I’ve decided this will be my last year of teaching.

15 Responses to Universities in France and Australia