Most of our time in Blois seems to be spent frantically gardening, restoring fireplaces and making laundries, but this time, I’ve checked the weather report and Thursday looks as though it will be bright and sunny. We have breakfast in the garden then, after much searching, unearth our Blois & Chambord bike maps. We decide on itinerary n° 11 & 11 B (total of 50 K) because Jean Michel says we haven’t completed the loop before. 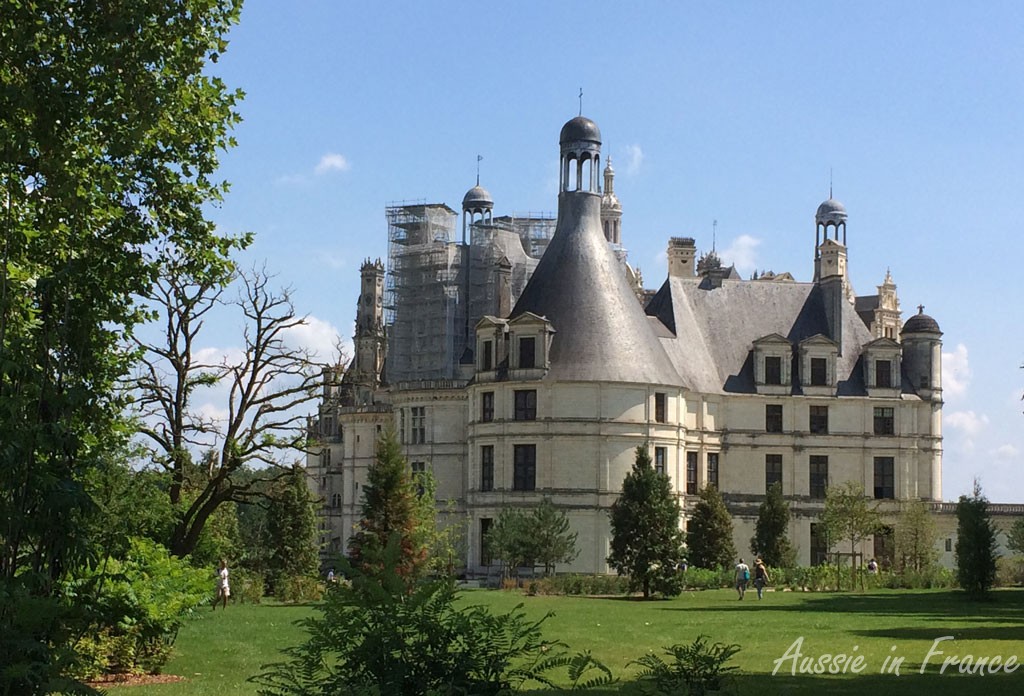 We drive to Saint Dyé sur Loire and park in the church grounds. It’s getting close to midday by the time we start out for Chambord. I’m a bit disappointed when we arrive to see there is more scaffolding. 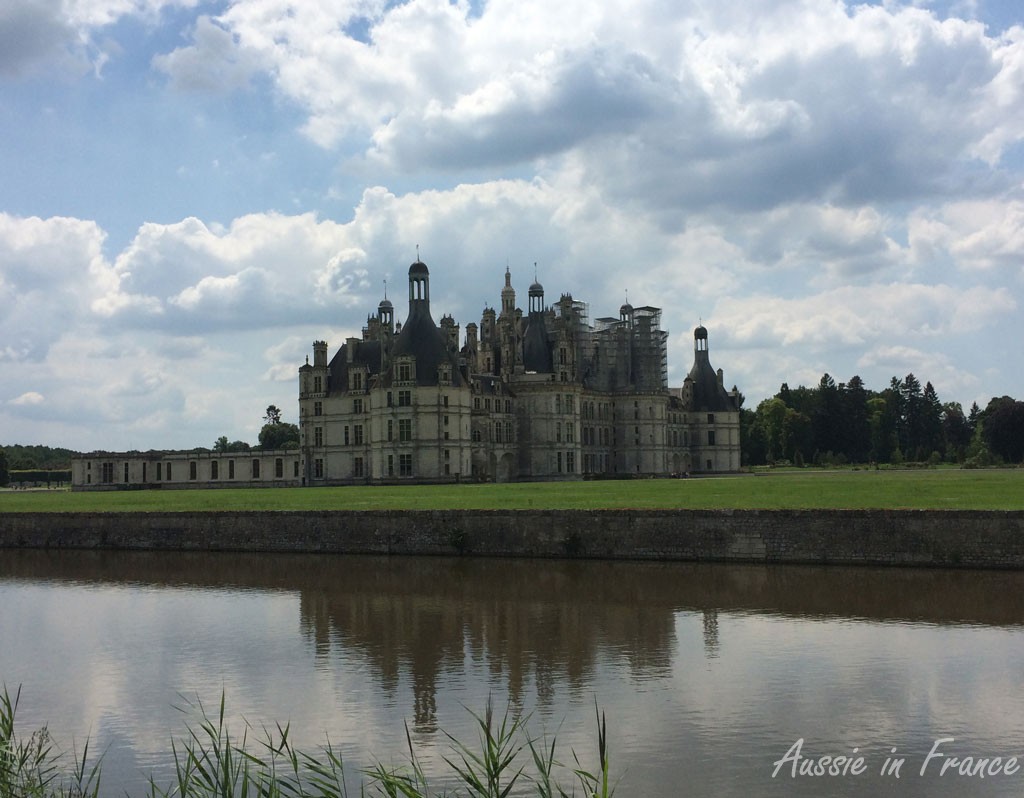 Chambord reflected in the Grand Canal

After lunch at the Saint Louis (dish of the day and café gourmand) we cross the little bridge and set off along the Grand Canal because I want to take a photo of Chambord reflected in the water like my friend Anda from Travel Notes and Beyond. But clouds have appeared and the reflection is not exactly what I was looking for. 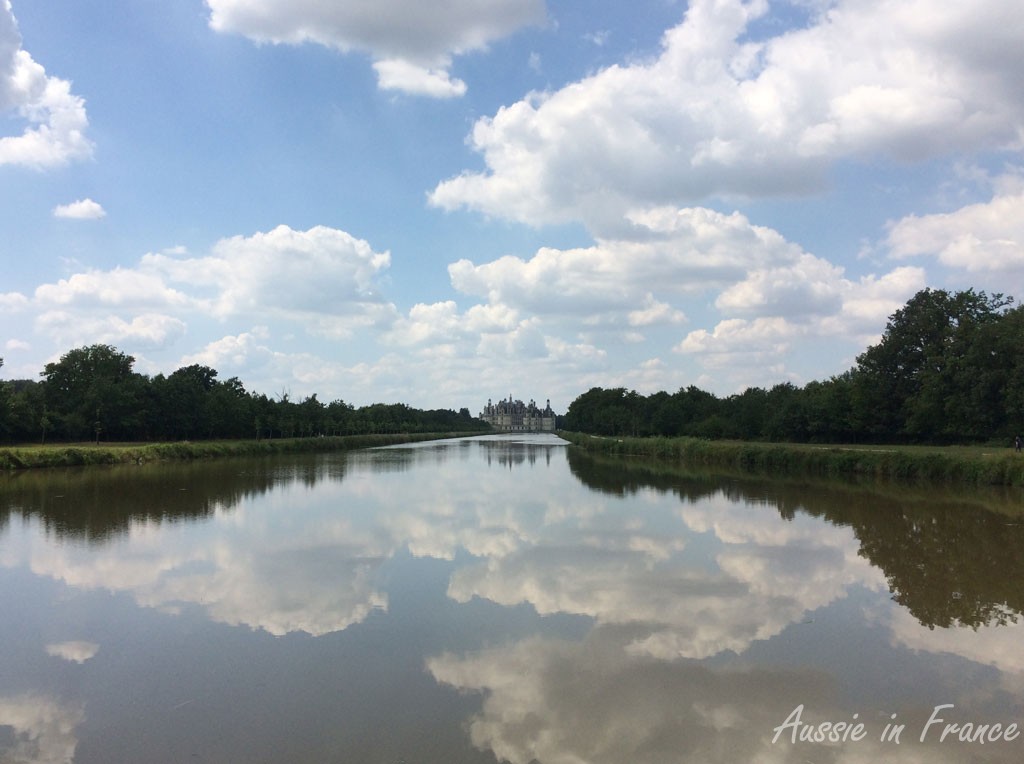 And what do we discover – a completely  new view of Chambord from the other end of the canal. This time, the clouds are lighter and their reflection in the canal is spectacular. 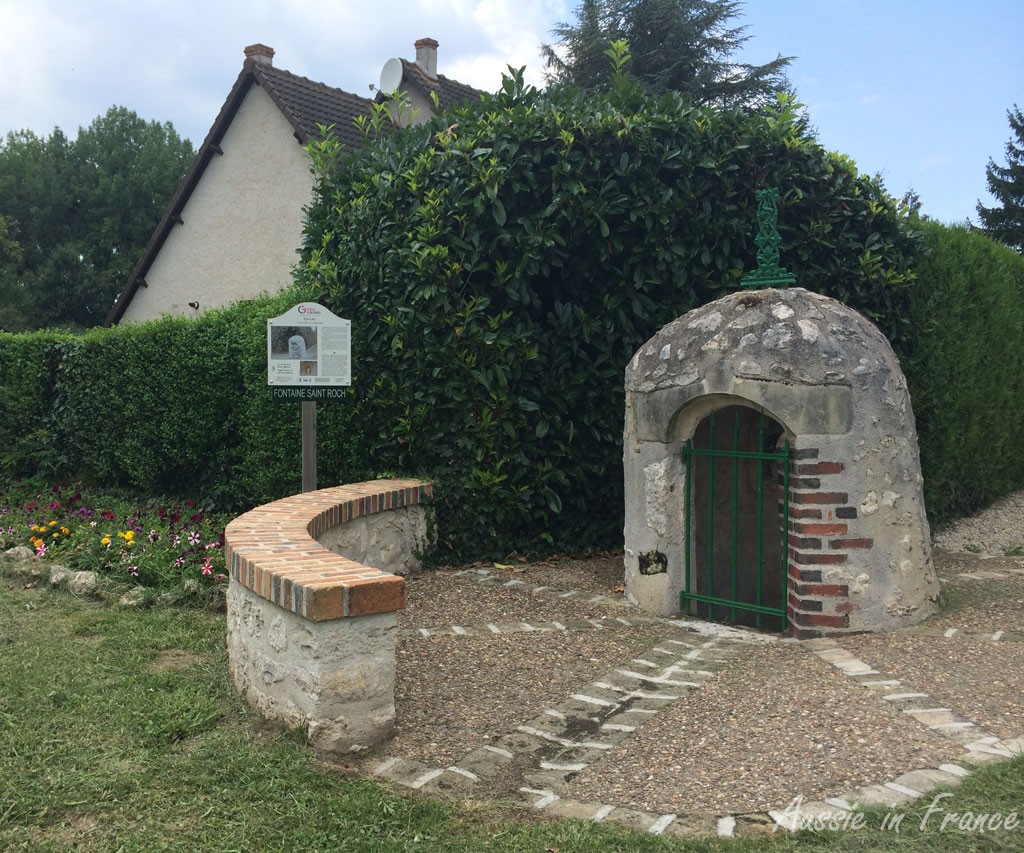 We continue the cycle path towards Saint Laurent de Nouan, our final destination, and find ourselves in the little town of Thoury. I surprise Jean Michel by remembering it from a previous bike ride and he comes to the conclusion that we’ve already done the n° 11 loop (but not the n°11bis. The typical Sologne well of Fontaine Saint Michel has all been spruced up. You can see its little wrought-iron sculpture of a snake coiled around a tree branch. 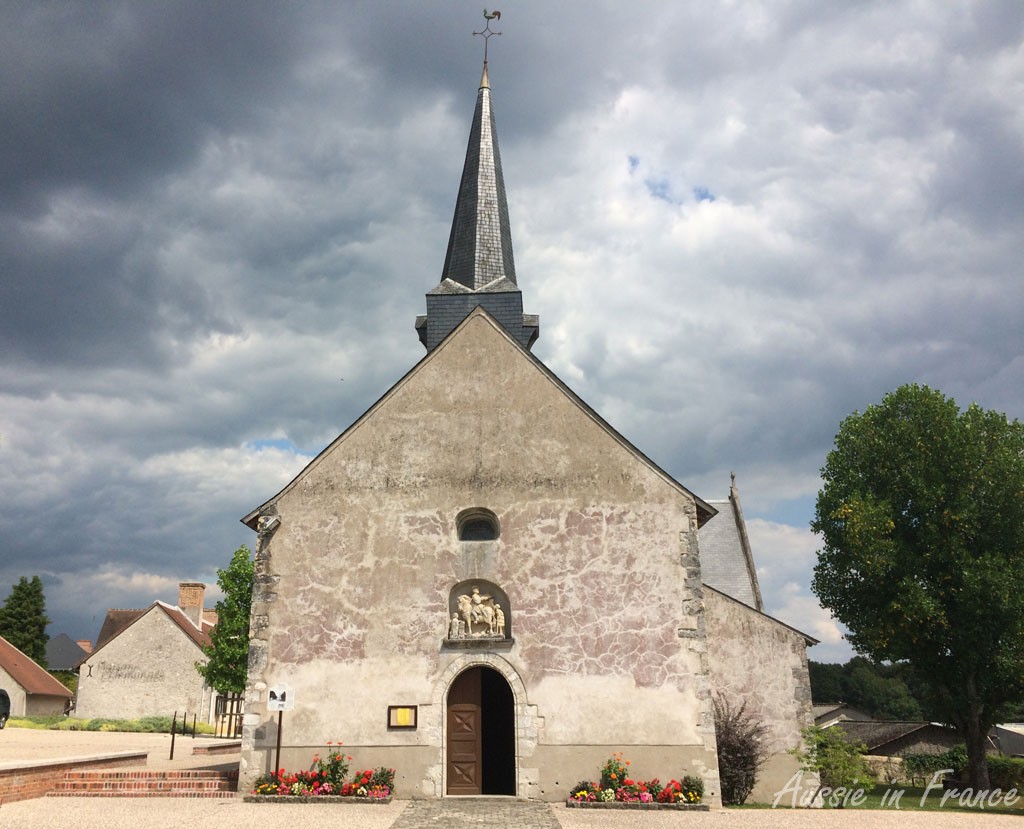 Not long after, we come across the 11th church of Saint Martin de Crouy which coincidentally I published just a few days ago on Blois Daily Photo. Once again I astonish Jean Michel by telling him what’s inside the church! I also take a better photo of the sculpture of Saint Martin on the façade. By now, the storm clouds are looking more threatening. 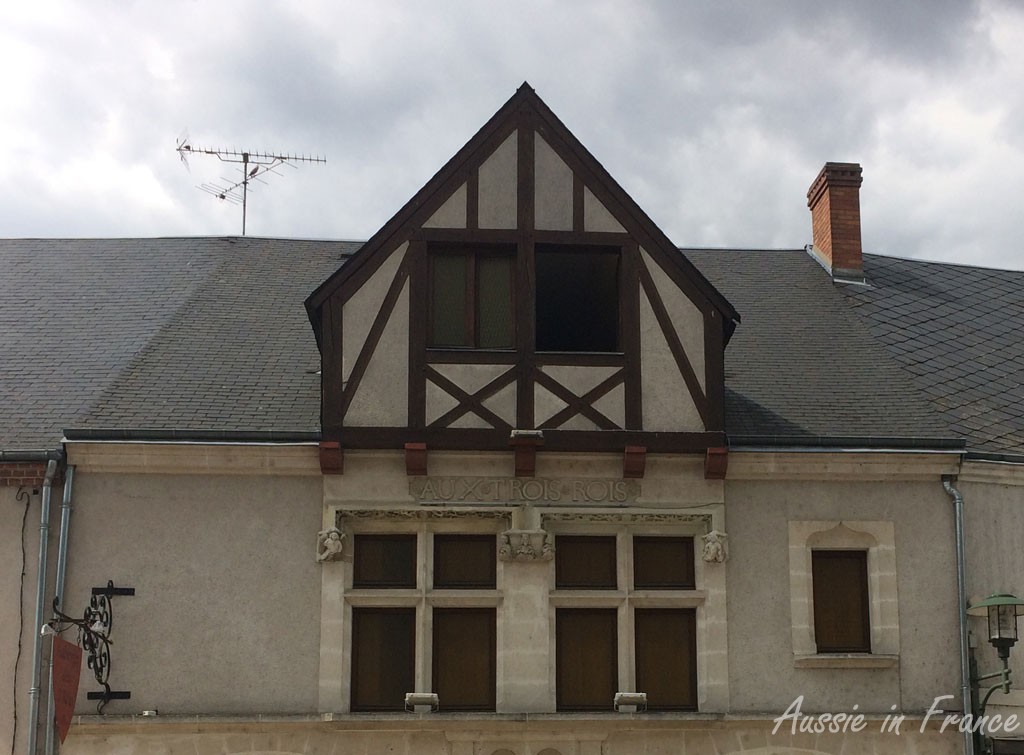 By the time we reach Saint Laurent, we’ve ridden about 25 kilometers straight and I’m well and truly ready for a cold drink. The main street has a couple of interesting buildings, including Aux Trois Rois or the Three King Inn. Built in the 15th century, it welcomed such distinguished guests as Philippe le Bel, Louis IX, Charles VIII, Louis XIV, Alfred de Musset, Jean de La Fontaine, d’Artagnan and maybe even Joan of Arc. Unfortunately, it was dismantled between 1780 and 1781 and sold in several parcels. The mullion windows are copies of the original structure, I’m sad to learn. 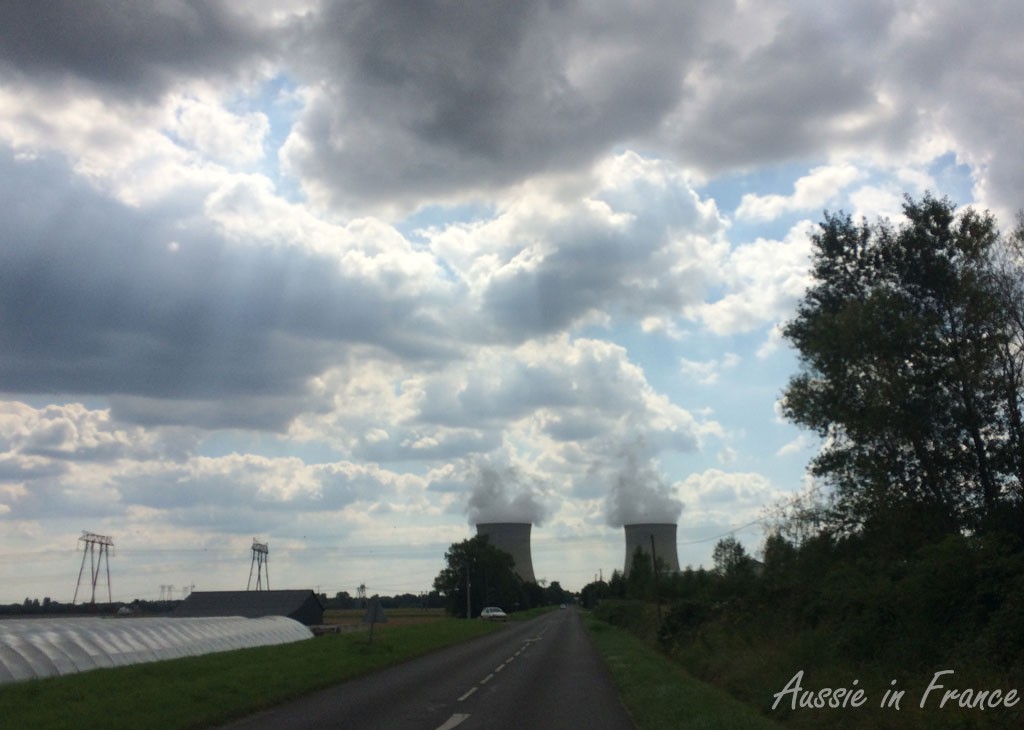 To my disappointment, no friendly café comes into sight and instead we find ourselves on a 70 kph road taking us straight towards the Saint Laurent NUCLEAR POWER PLANT. Now why didn’t I realise that before when I looked at the map? 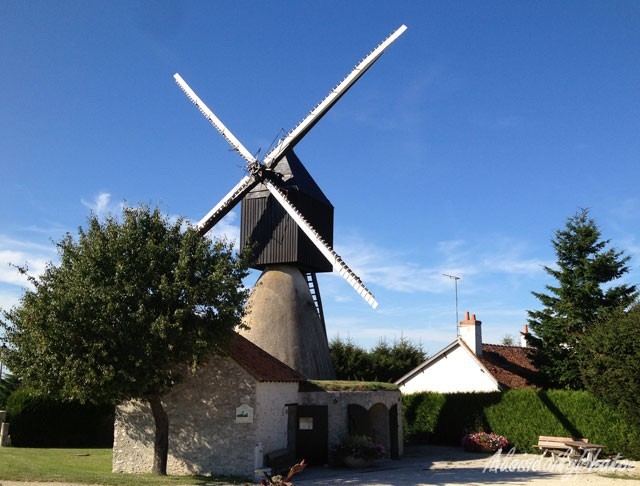 I rant and rave about the inappropriateness of putting a nuclear power plant on a cycling itinerary and we eventually reach the beautiful Saint Jacques windmill we have already visited on a previous occasion. Still no café … 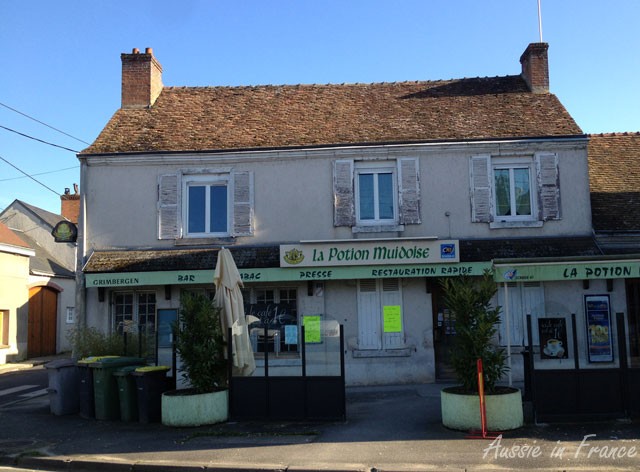 La potion muidoise which is a reference to the druid’s magic potion in Astérix, also taken on a previous occasion

We finally get to Muides after a very bumpy ride along the river thankful that it hasn’t actually rained. By then, we’re so near to our destination that the thought of the only somewhat decrepit café in Muides with its local bar supporters, no longer appeals. Also, it might be closed the way it was last time … 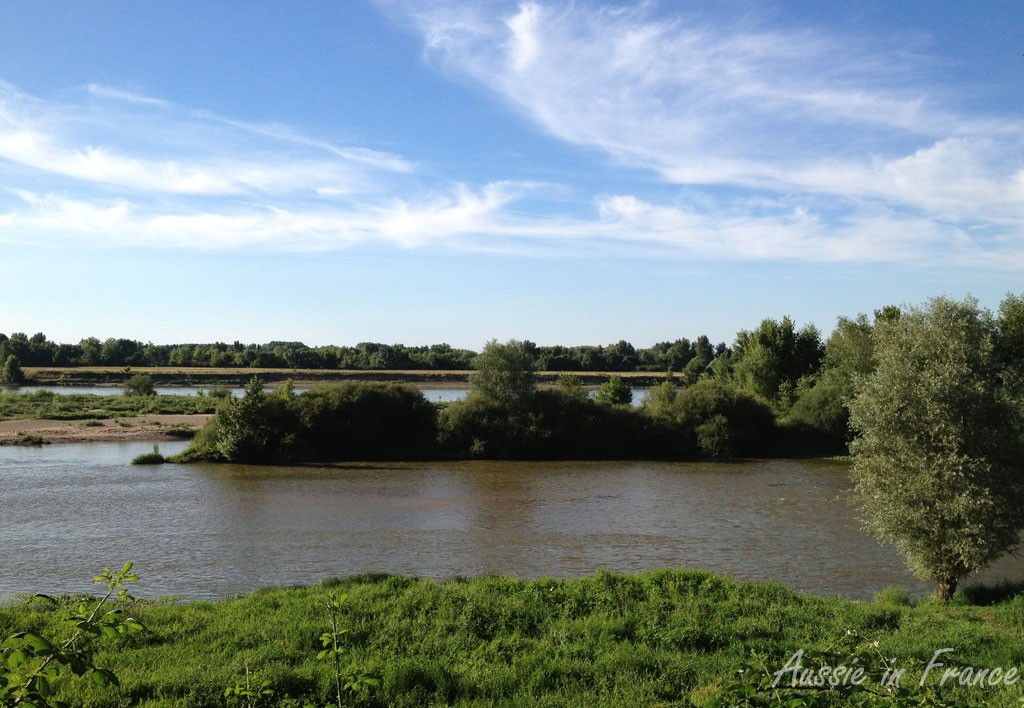 We cycle the last few kilometers back to Saint Dyé but the sky is muggy and not nearly as nice as the last time. I surprise myself by going straight up the hill next to the church almost effortlessly. I don’t know where that energy suddenly came from. In the future though, we’re going to remember only to do itinerary 11 and ignore 11 bis. A nuclear power plant indeed!