Posted on September 29, 2014 by Rosemary Kneipp

It’s an intermittent fast day so we prepare a picnic to eat in nearby Estrela Gardens with their exotic trees and shrubs and 19th century bandstand, obviously a Saturday rendez-vous for the locals. 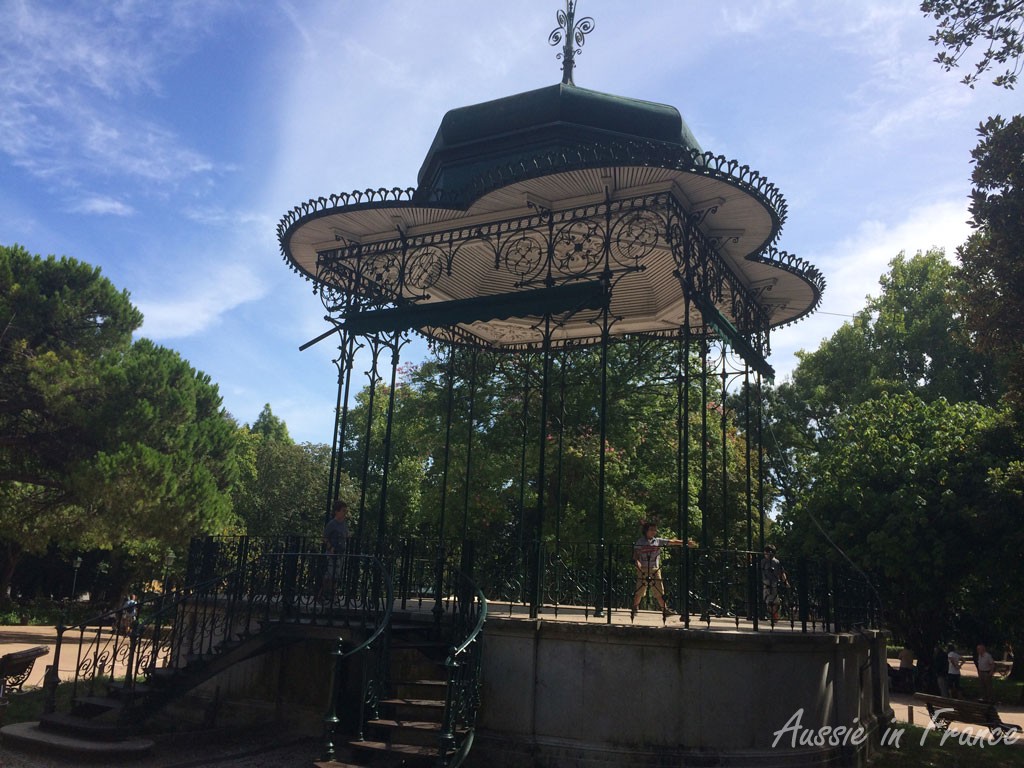 There’s even an outdoor cinema. What a pity it’s in Portuguese or we could come back in the evening and conjure up childhood memories of sitting under the stars on canvas seats at Magnetic Island in North Queensland, particularly with all the tropical trees around us. 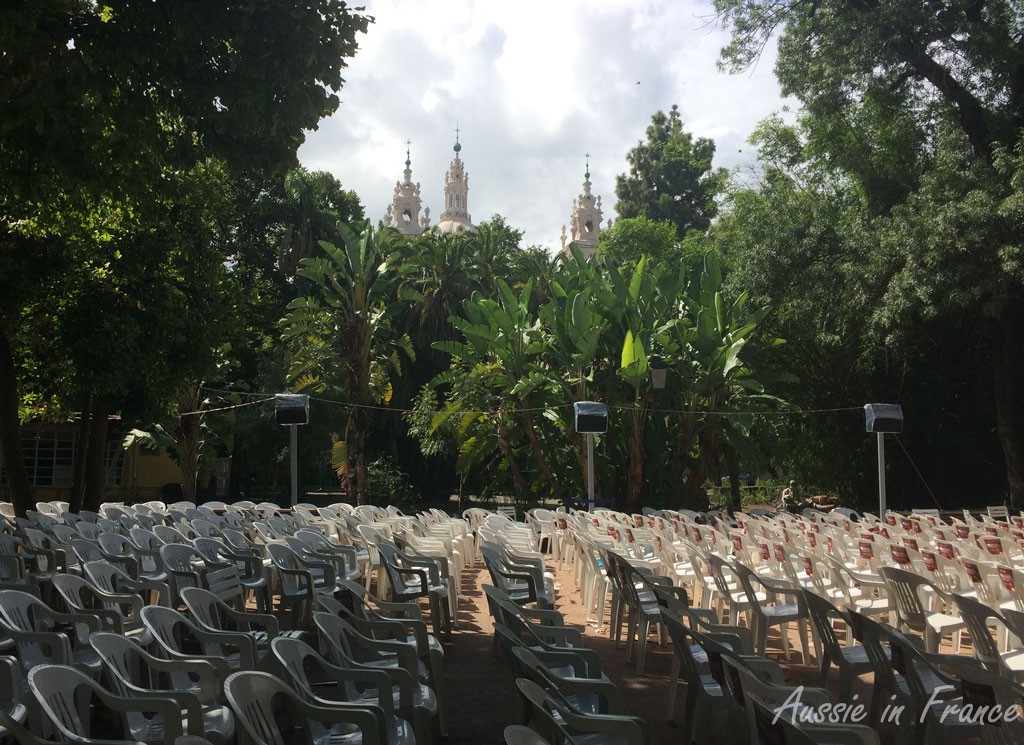 Open-air cinema with the Estrela Basilica in the background

Just opposite the park is the imposing Estrela Basilica but there is a mass inside so we don’t visit – it doesn’t look any different from most of the other churches we’ve seen in Lisbon anyway. 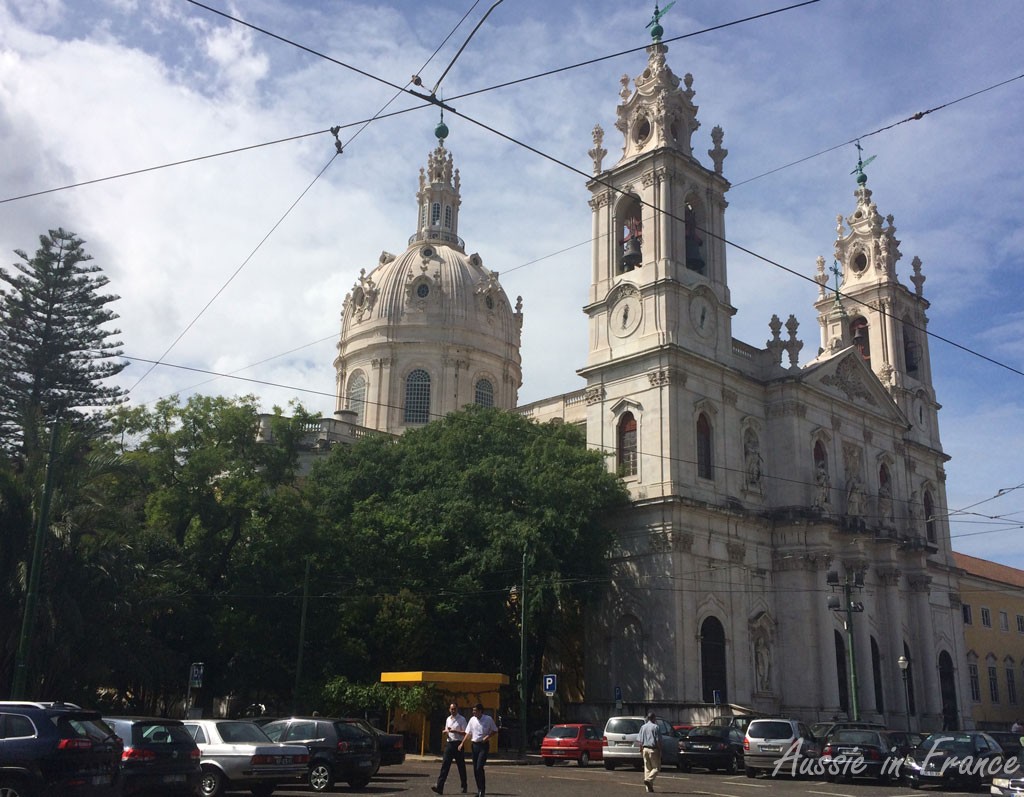 Basilica da Estrela built in the 1780s, impossible to photograph without the tram lines!

Instead we take the famous n° 28 tram which is a great favourite with tourists so is usually completely full. But this is the terminus even though the tram does a loop so we manage to get a seat. If you are on the tram and want to continue you have to get out and walk to the next stop a few metres further on. 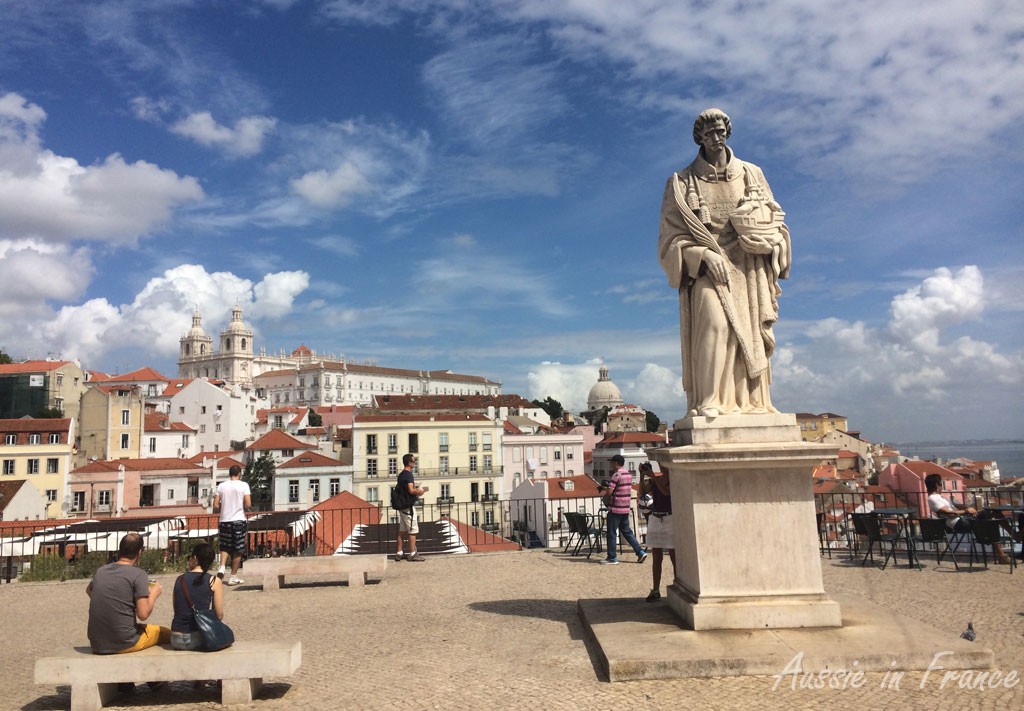 Alfama in the sun – with lots more people!

As we’re almost at the beginning of the queue, we both get a single seat on the right. It takes us up the hill to the cathedral and through the Alfama quarter we visited in the rain but as today is fine and sunny, there are a lot more people. We decide to stay on the tram until the second terminus. 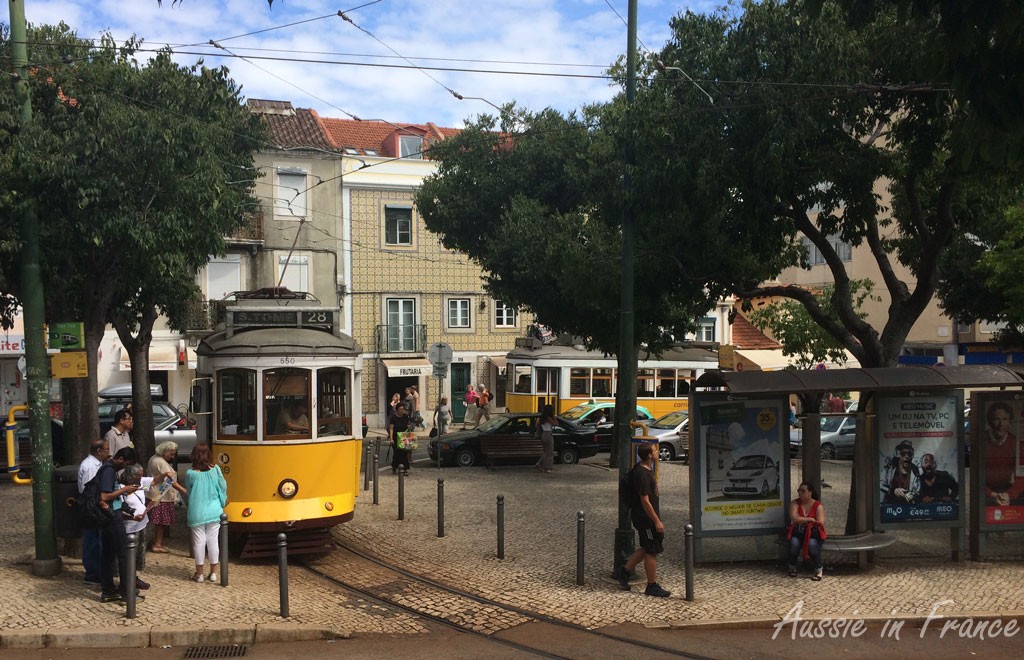 With a big clunk, the tram stops and the driver announces finished. Some of the people look completely bewildered because they don’t know about moving along to the next stop. Jean Michel checks the map and says we’re in Largo da Graça and we can walk to the Miradouro Sophia de Mello Breyner Andresen, which we also visited in the rain. It, too, is full of people today. 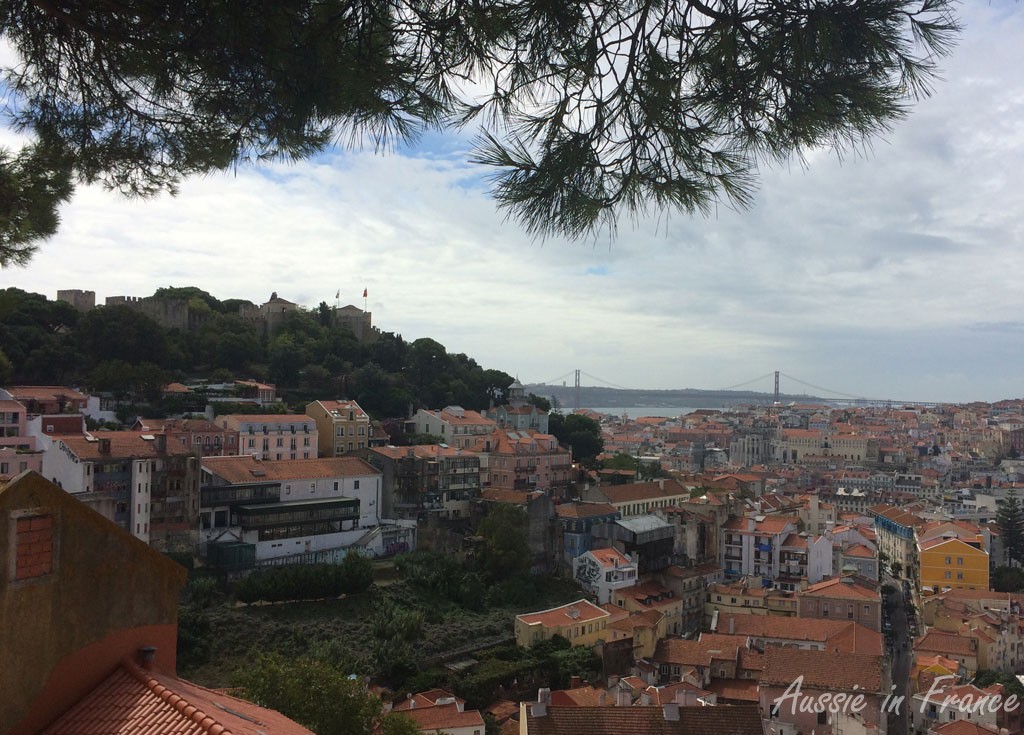 You can see the castle on the hill on the left from Miradouro Sophia de Mello Breyner Adrensen, the esplanade in front of Graça church

However, it still offers the best view of the castle on the next hill over. Up and down we go until we reach a very decrepit area that is part of the Alfama but last time we came from the opposite direction and it didn’t look nearly as bad. 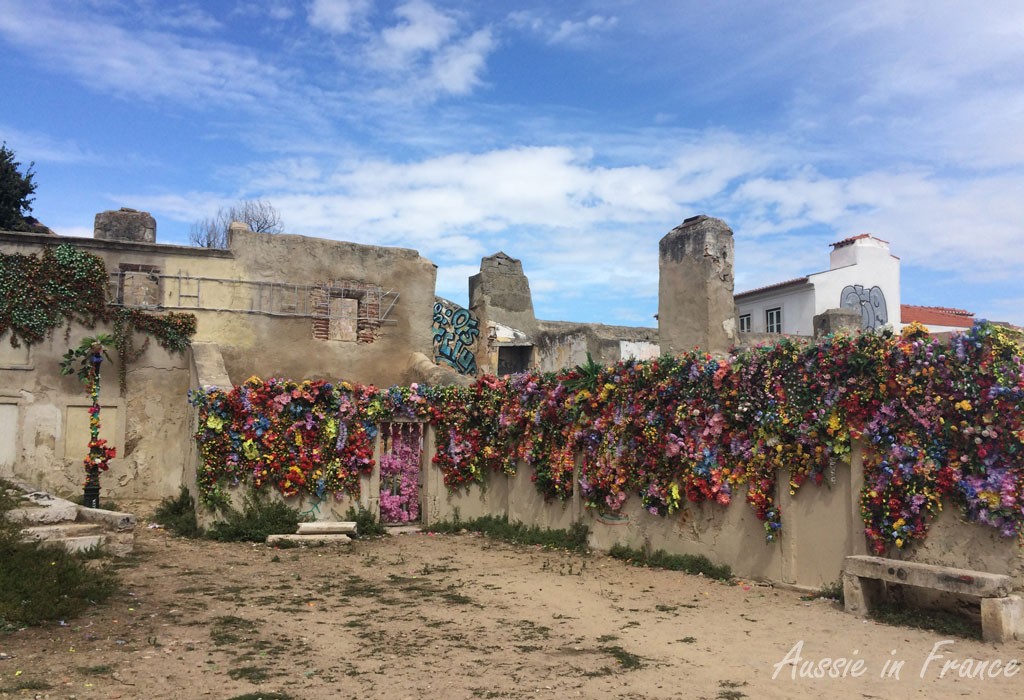 The Disoriented Pavilion by Camila Cañeque, 1984

We walk around the ramparts of the castle but they are hidden by more delapidated housing. We walk through a tiny street and come out on an a vacant alotment with masses of artificial flowers. This, we learn from the sign, is a work of art called the Disoriented Pavilion by Camila Cañeque, Spain, 1984.  Taking “disappointment as a starting point, the sign explains, her art interrogates unending paradoxes on how humans create and modify the cultural/material landscape they inhabit”. Yes, well … 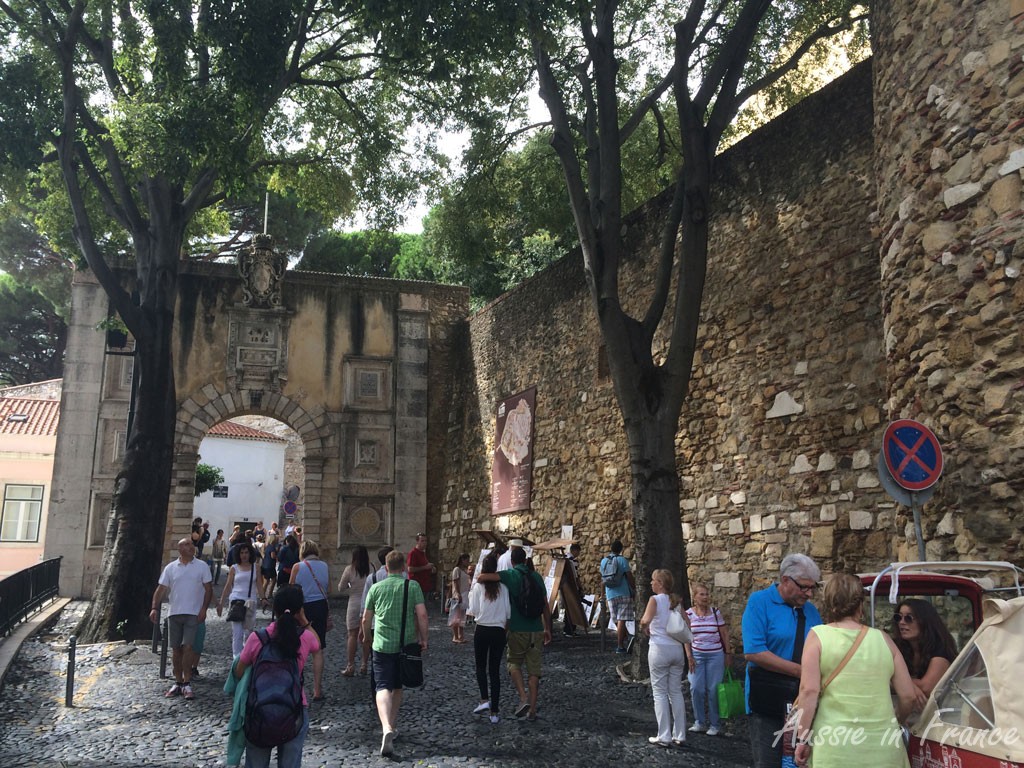 Crowds in front of the entrance to the castle walls

The castle is surrounded by souvenir shops and cafés. There is a long queue even to visit the grounds so, instead, we decide to go to the nearby 17th century Mosteiro de São Vicente de Foro (Monastery of Saint Vincent outside the walls), renowned for its azulejos and in particular a collection illustrating La Fontaine’s fables. 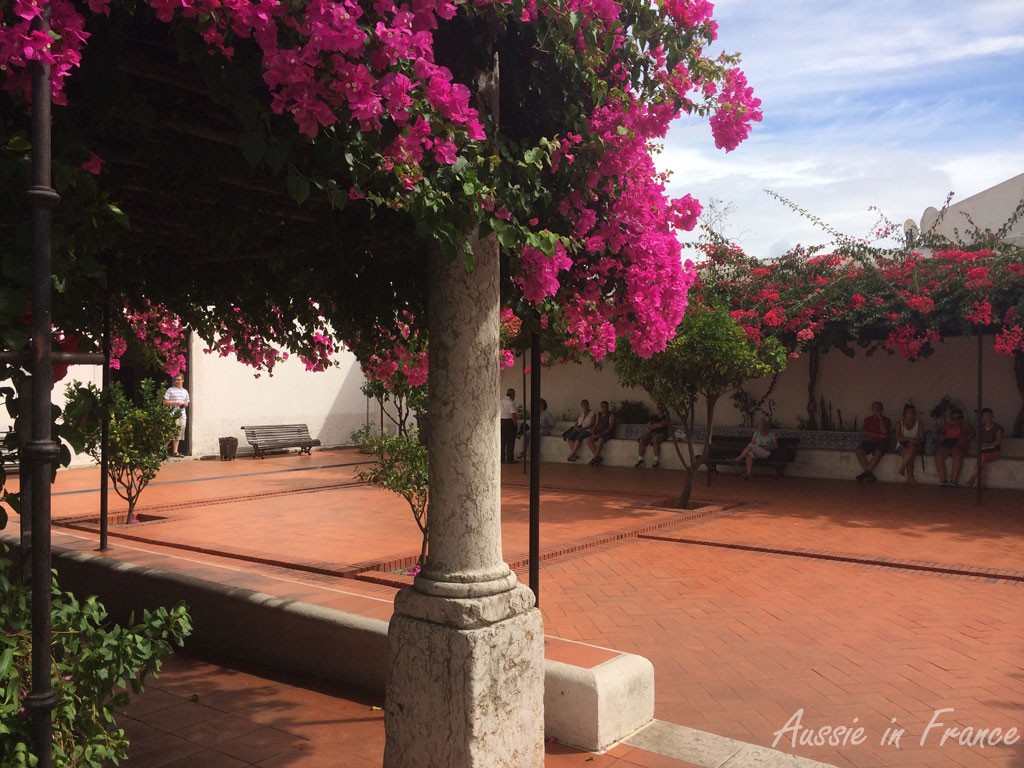 We give the church a miss and enter the monastery via a bougainvillea-covered courtyard. Inside are two-storey cloisters with blue and white azulejos on every wall. There is virtually no one in sight. 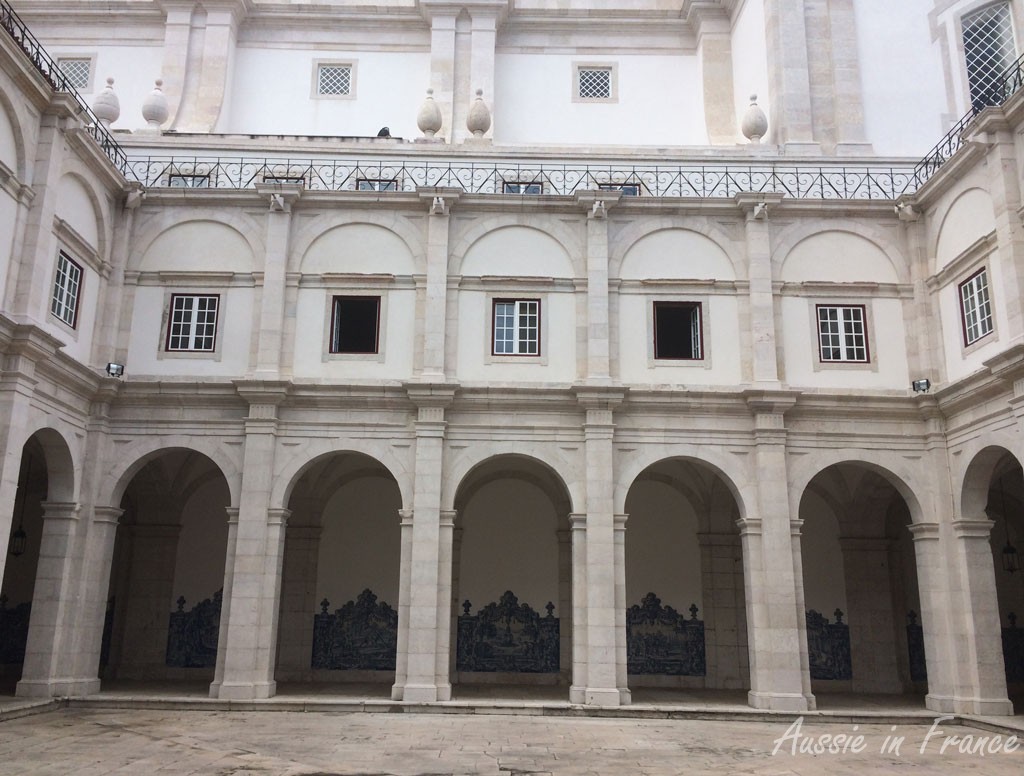 The two-storey cloisters with their azulejos

Various rooms lead off the cloisters, including a lugubre royal pantheon of the Braganza monarchs and a marquetry marble chapel. 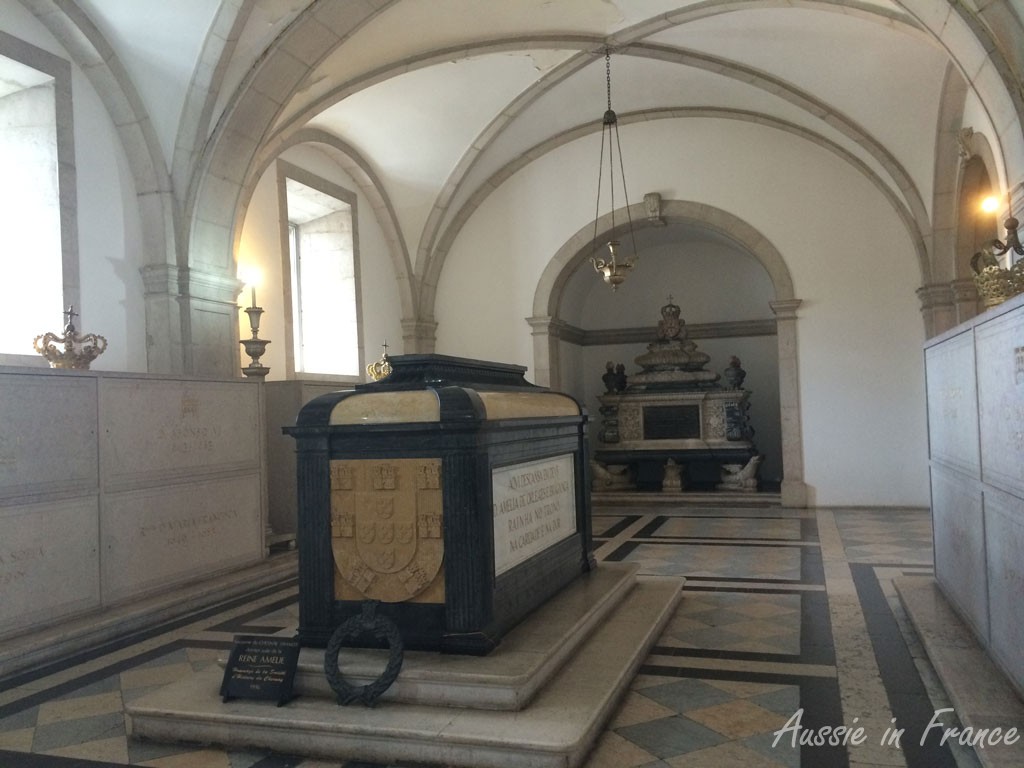 The mausoleum of the Braganza monarchs in Saint Vincent’s Monastery

A staircase with azulejos on both sides leads up to the La Fontaine collection on the first floor. I don’t recognise any of the 38 fables but our guide book tells us that many of them are relatively obscure. I like the one about the astrologer who is so busy looking at the stars that he falls into a well. 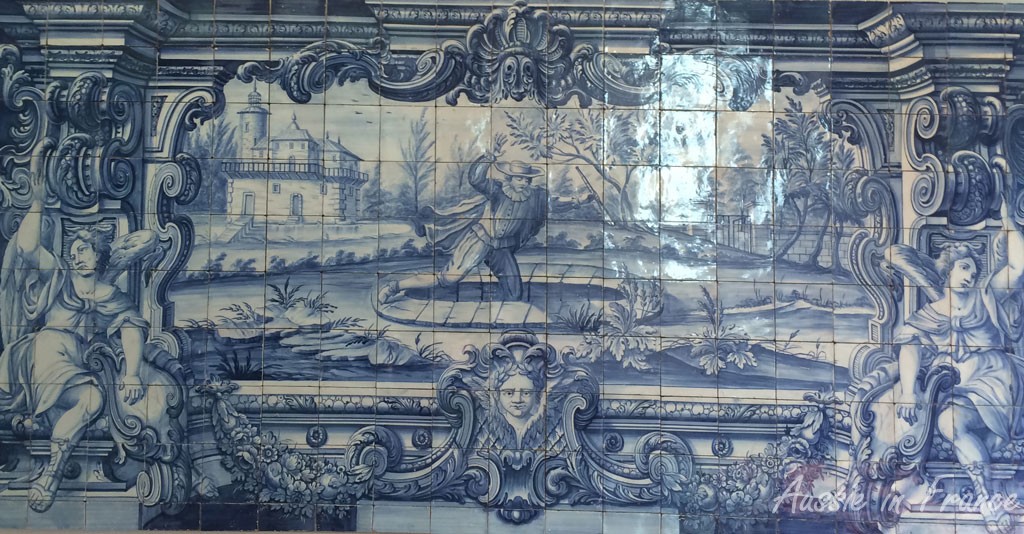 By now, my feet are aching but we remember that the lady who sold us the tickets said there was a good view from the roof terrace. Good is not the word – it is breathtaking. We can see the National Pantheon, Alfama, the Tagus River and rooftops of Lisbon spread out before us. 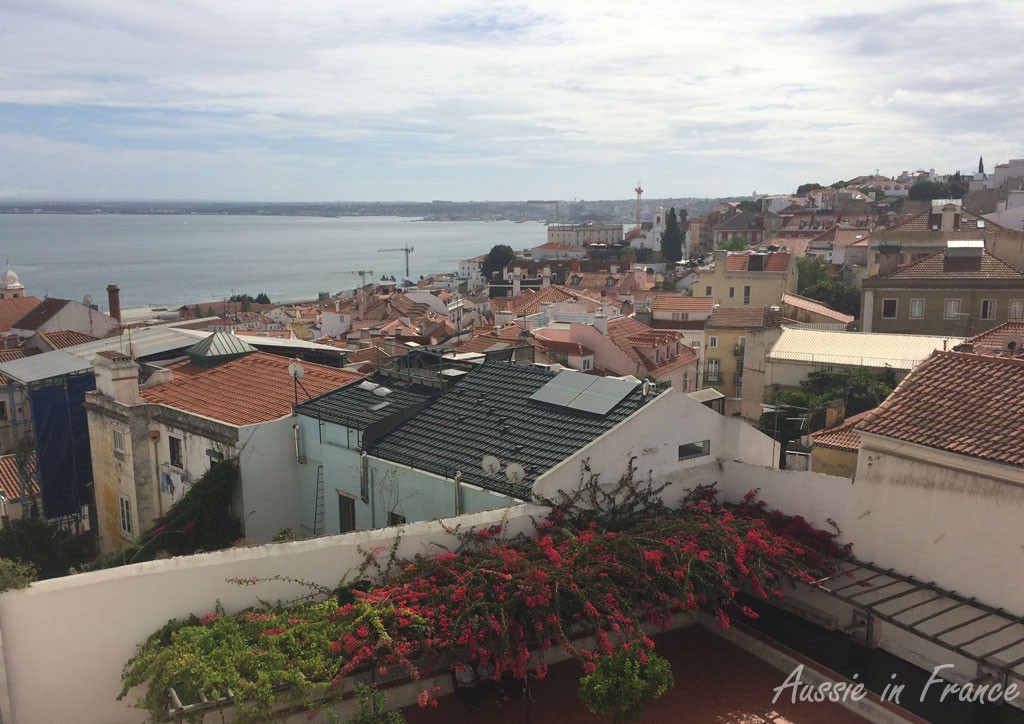 There are lots of columns on top of the balustrades that remind me very much of Gaudi’s chimneys, especially the ones on Guell Palace. This is not the first time that I am reminded of Gaudi in Lisbon. 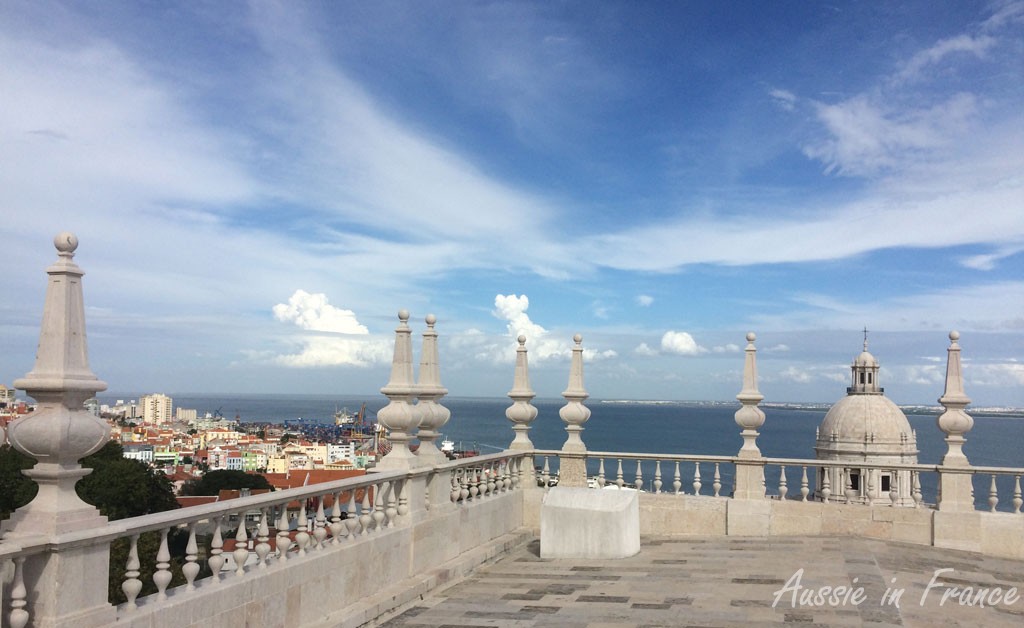 The pinacles on the rooftop of the Monastery

We walk back to Largo da Graça to get the n° 28 tram down to our bus in the historical centre. We’ve only been in it for a few minutes before it comes to a stop. The driver climbs down to check the tyre of a big black stationwagon badly parked halfway up the pavement next to us. We can’t get past because the tyre is turned outwards. 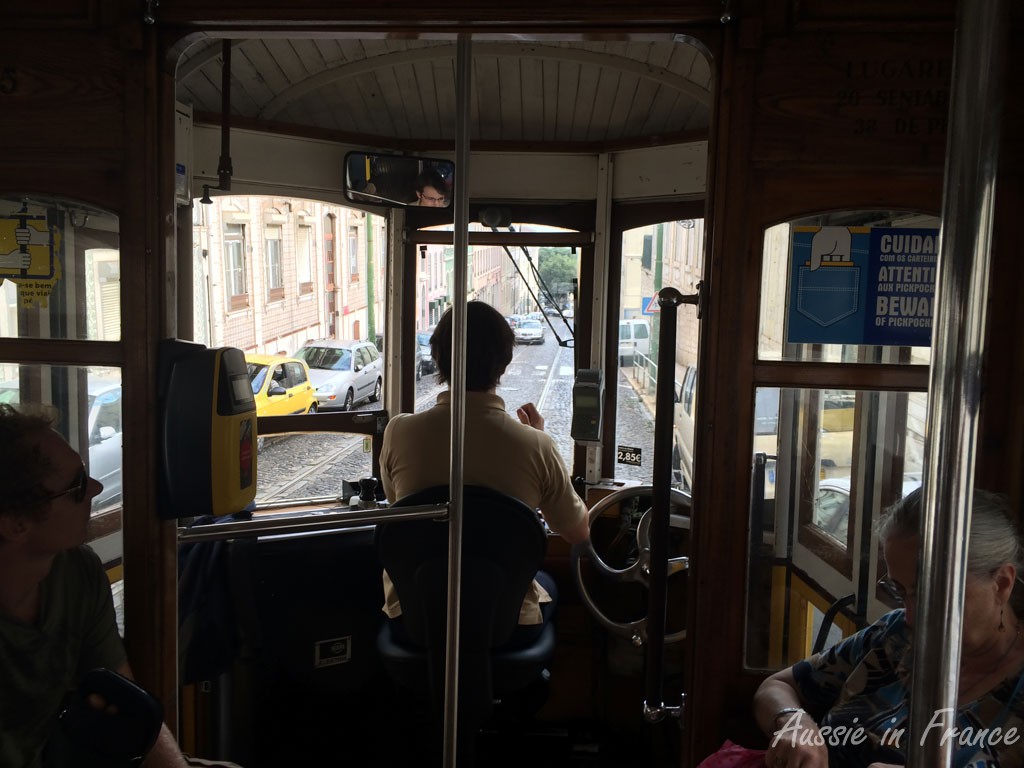 As the passengers don’t believe we can’t get past, the driver, who seems very young, gets out with a template and shows that it’s impossible. He blows his horn very loudly for a long time but nothing happens.The next tram soon pulls up behind us so the drivers have a conflab. Our driver gets back into the tram and phones the police. There is a lot of photo-taking and questioning from the passagers, most of whom are tourists. 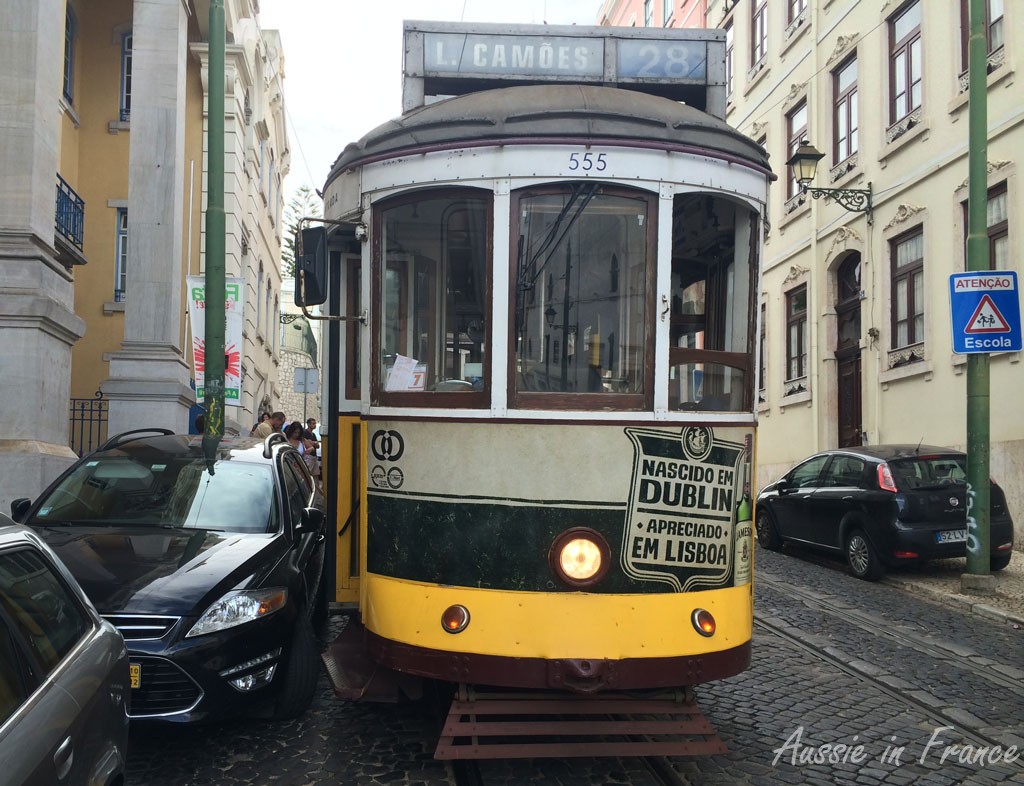 Too close for comfort!

I whip out my dictionary and ask the Portuguese lady behind me if this happens frequentemente. She shakes her head. Eventually the driver tells us in English that it’s going to take an hour for the police to come and tow away the car.  People start to leave the tram including ourselves. 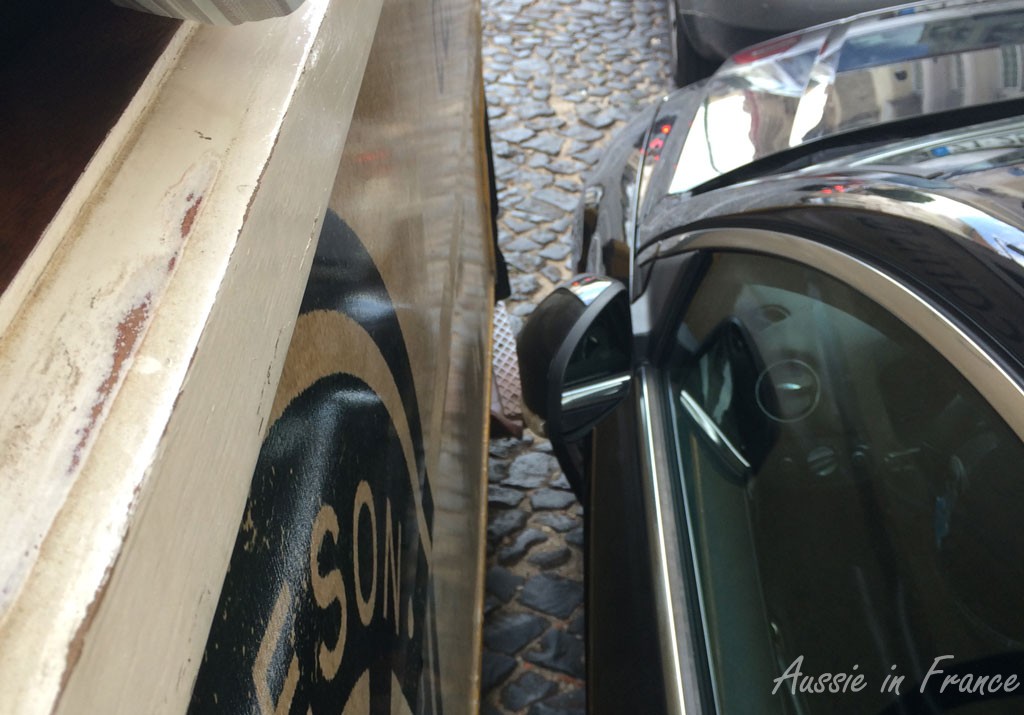 Not enough distance between the tram and the car tyre

Then several men all try to lift the car out of the way. Jean Michel joins them and they manage to move it enough to let the tram go past. Everyone cheers. The driver gets back into the tram and edges his way forward. We all breathe a sigh of relief!

12 Responses to Lisbon – an iconic tram, a hilltop castle, La Fontaine’s fables and a sublime view