Lisbon in the Rain and More Great Panoramas

Posted on September 15, 2014 by Rosemary Kneipp 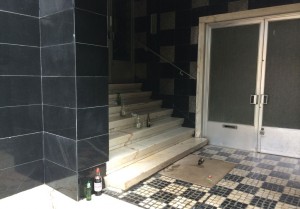 Late night partying in the entrance next to ours

After virtually no sleep during our first night in Lisbon due to a barking dog, jets constantly flying overhead, merry makers under our window, the arrival of the rubbish truck at 1.30 pm with much clashing and clanging and shouting, leg cramps from being squashed into a plane for a couple of hours and a smaller-than-usual bed, I wake up to rain and hammering at 9 am.

It’s an intermittent fast day but there is no coffee or tea (I discover the coffee supply three days later!) and the closest café is 10 minutes in the rain. Hardly a great start to the day. Where is yesterday’s sun? 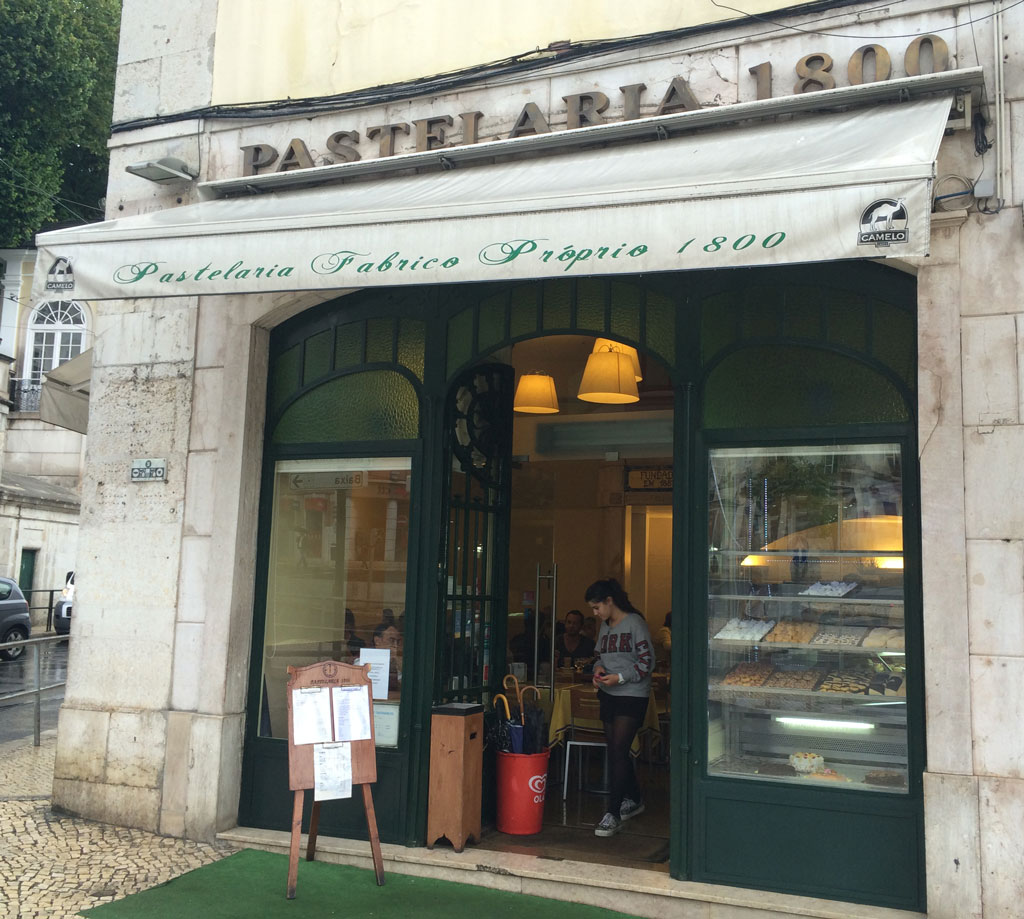 The rain finally relents and we set off for the supermarket, stopping for coffee at Pastelaria 1800 on the way. They also sell Lisbon’s famous pastel flans that everyone tells me are a must, but that will have to wait for tomorrow. 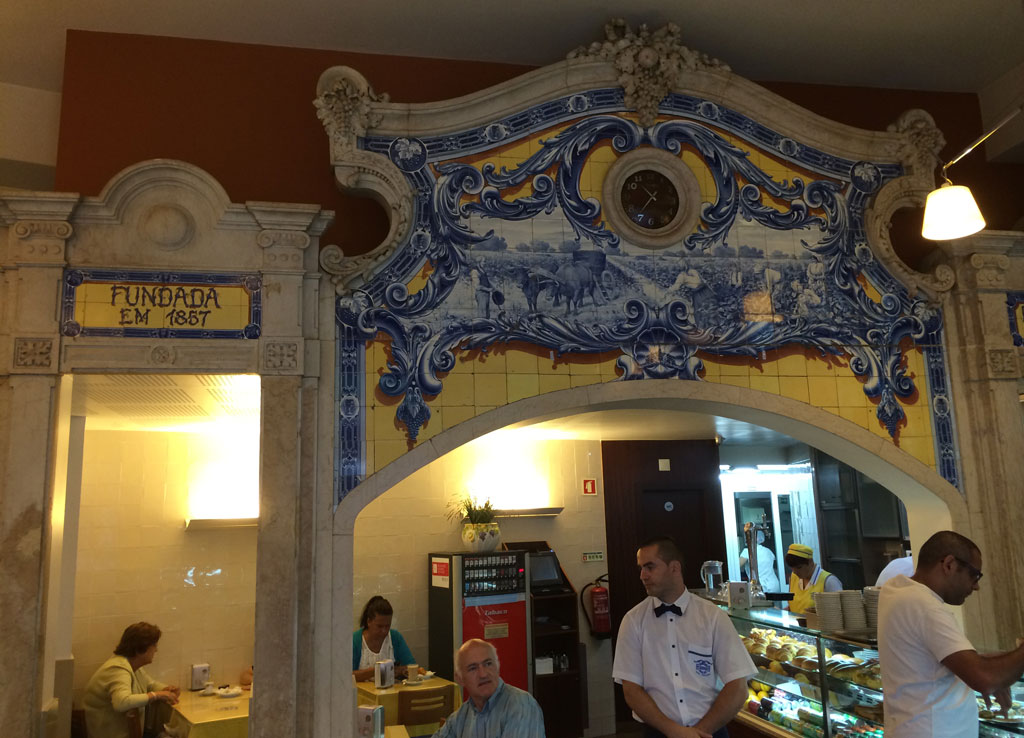 On the way, we pass several beautifully tiled entrances and many tiled façades. 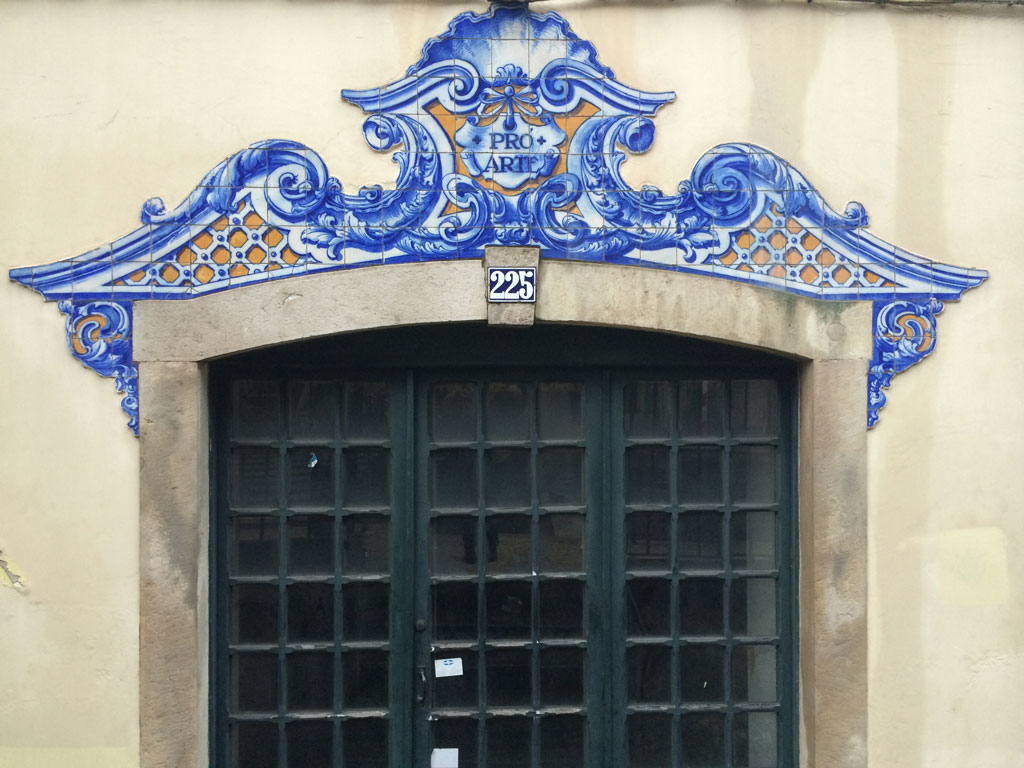 One of the many beautifully tiled entrances in Lisbon

When the sun finally comes through the clouds after lunch we set off immediately, taking the n° 758 bus down to the Tagus using our Zapping transport card, glad to be inside while it pelts with rain again. It all looks rather sad and dismal. 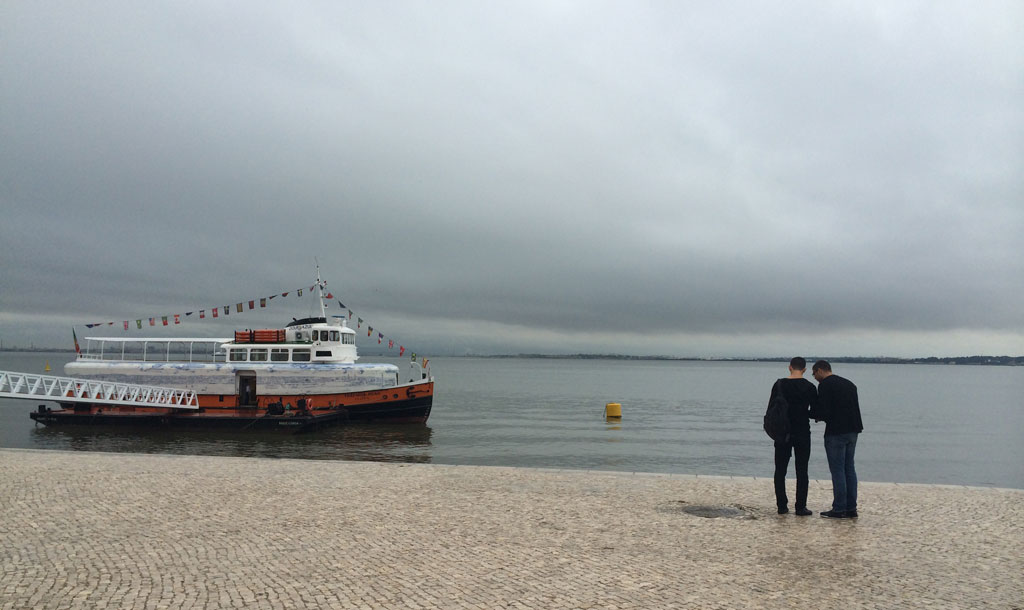 Our initial destination is the cathedral halfway up one of Lisbon’s seven hills. The most popular way of reaching it is on the N°28 tram. They are all full, with people leaning out the windows taking photos. We’ll try another day, making sure we get on at the terminus so we’ll have a seat. 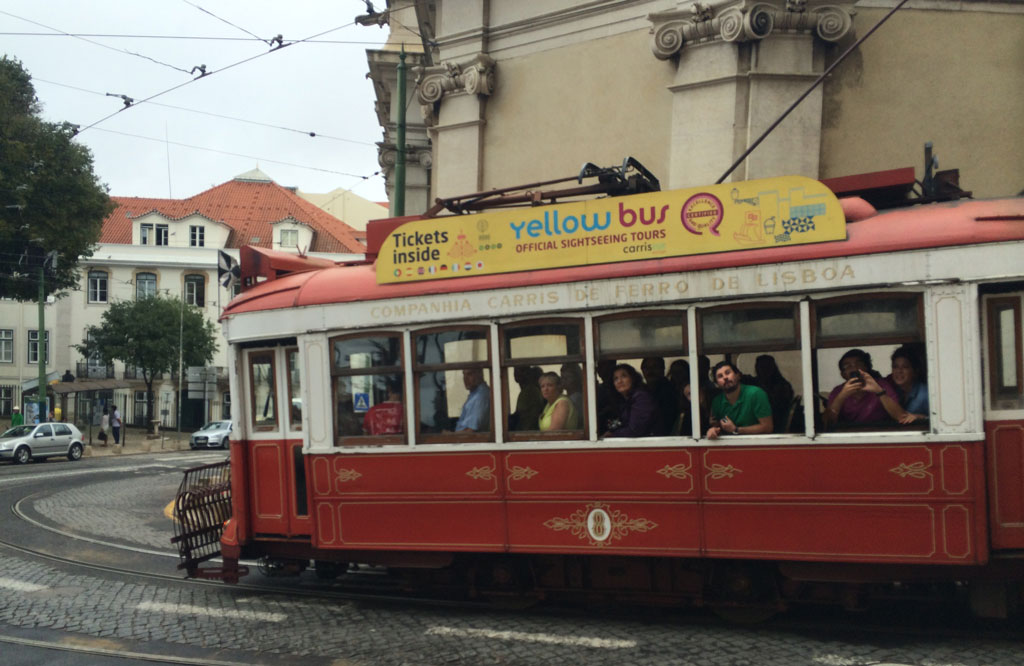 The cathedral itself is something of a disappointment – very sombre inside and uninviting. Not nearly as rich as Sao Roque’s with its incredibly rich chapels full of gold sculptures. 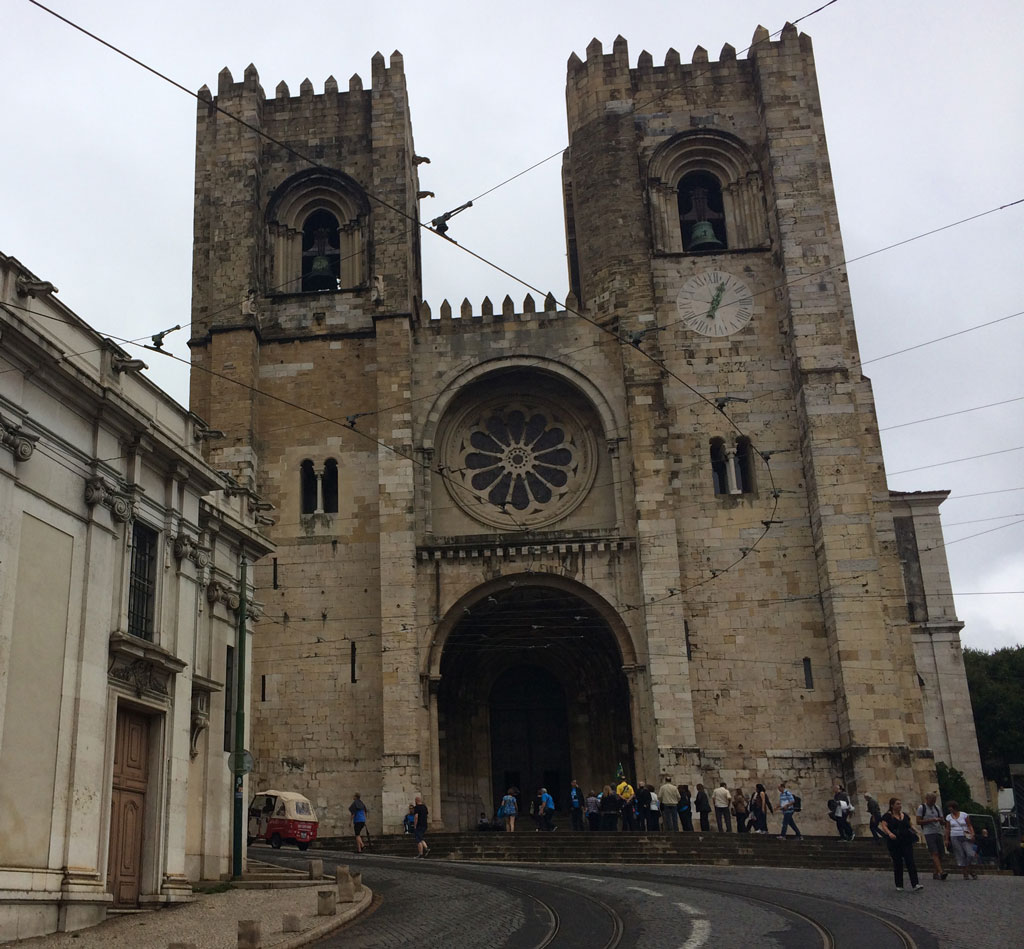 The cathedral, difficult to photograph, especially with all the overhead tram lines

After the cathedral we turn right and start walking up the hill to the Alfama quarter. Despite the intermittent rain, it is more attractive than anything we’ve seen so far in Lisbon and there are more stunning views. 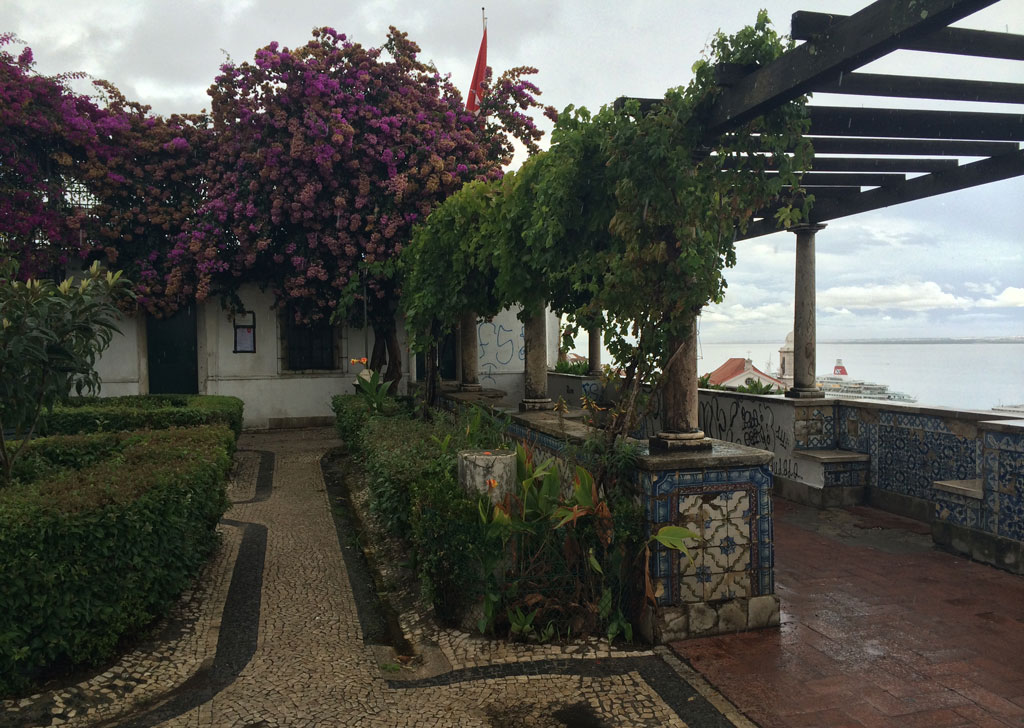 A miradouro in Alfama

A little garden covered with azulejos reminds me of the ceramics in the Cloister of Santa Clara in Naples, though on a much smaller scale. One mural depicts Paços da Ribera (Royal Ribera Palace) before the massive earthquake of 1755 that destroyed much of Lisbon’s historical buildings. It was rebuilt and remodelled shortly afterwards and is now called Praça do Comércio. 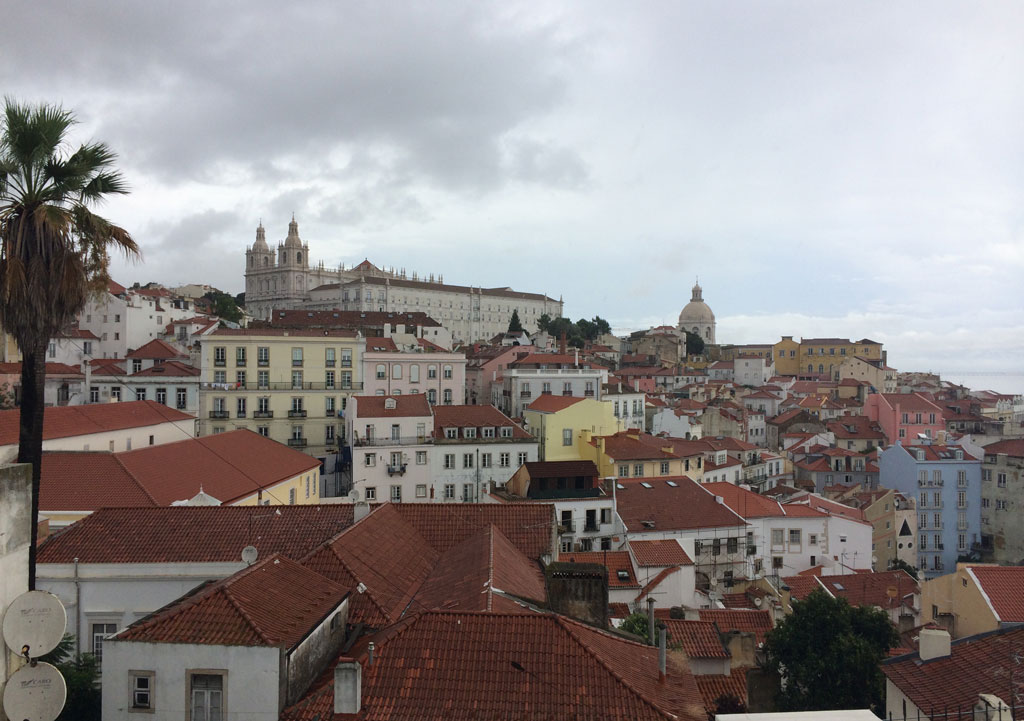 View of Saint Vincent Monastero and the Pantheon from Santa Luzia

Shortly afterwards we come to another large square, Santa Luzia, with more amazing views of the Tagus and the rooftops of Lisbon. 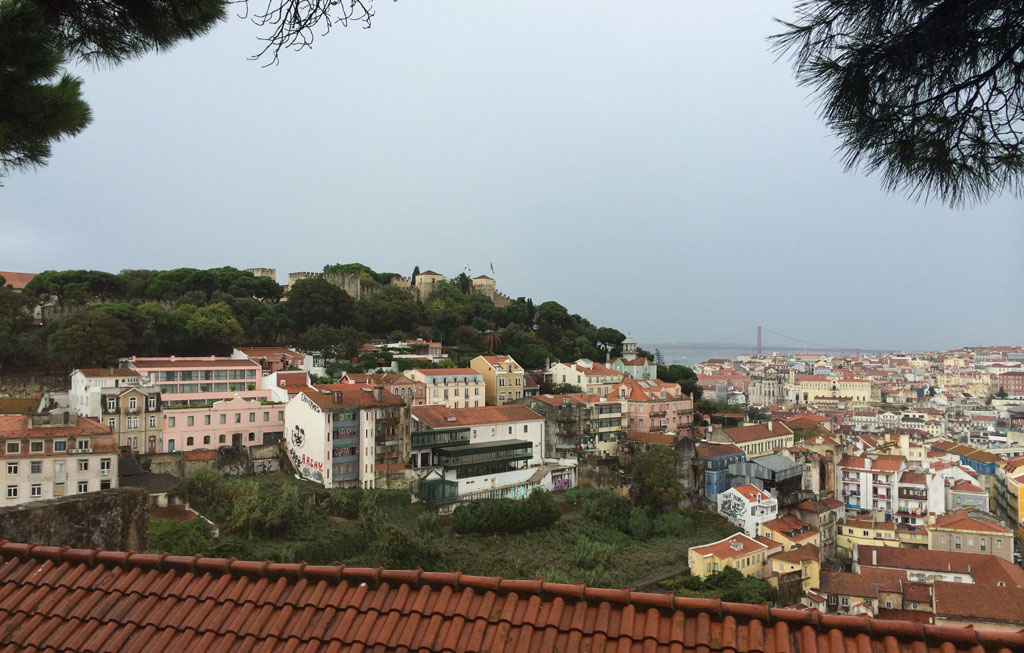 In the distance we can see an enormous church so decide to continue our upward climb to Igreja Graça which offers another incredible view, probably the best to be had of the castle of Saint George that we haven’t been to yet. The inside of the 16th century church itself, refurbished many times, is nothing special. 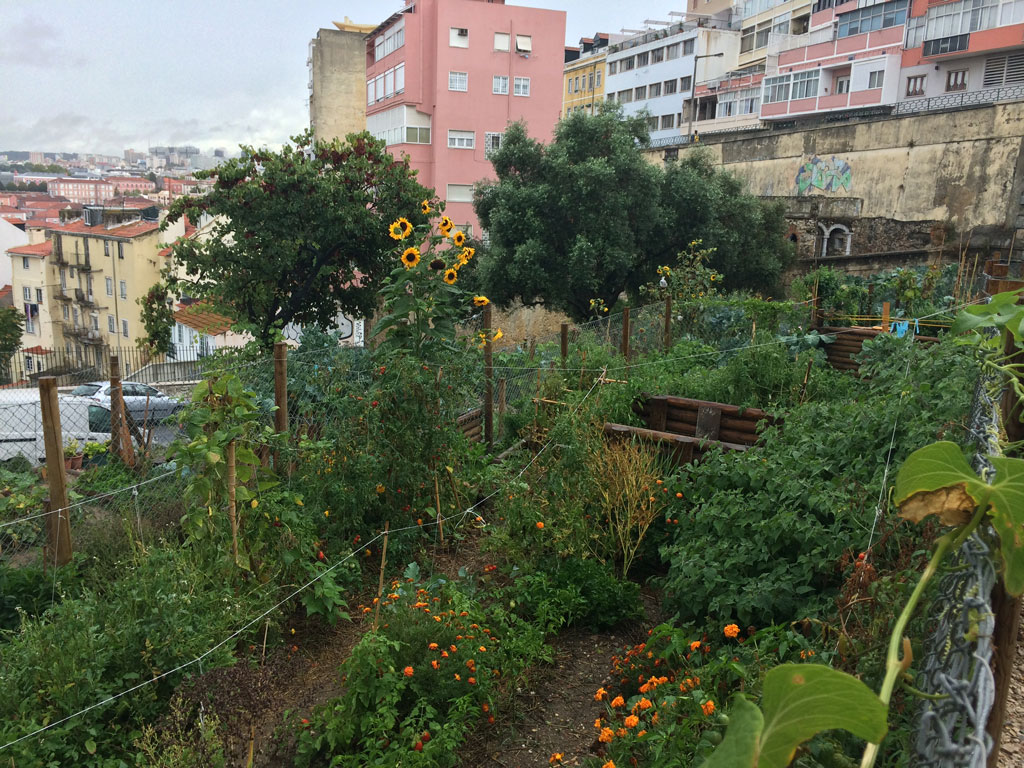 Allotments on the way down from Igreja Graça

The rain is falling steadily again so we decide to walk down the hill to the closest metro, Martim Moniz. On the way, we go past a series of alotments and a myriad of tiny shops, in various states of delapidation, each selling a different type of product. We reach a main street and a sign saying “shopping centre” so we follow it underground and discover a labyrinth of Chinese and Indian shops selling everything you can possibly imagine. 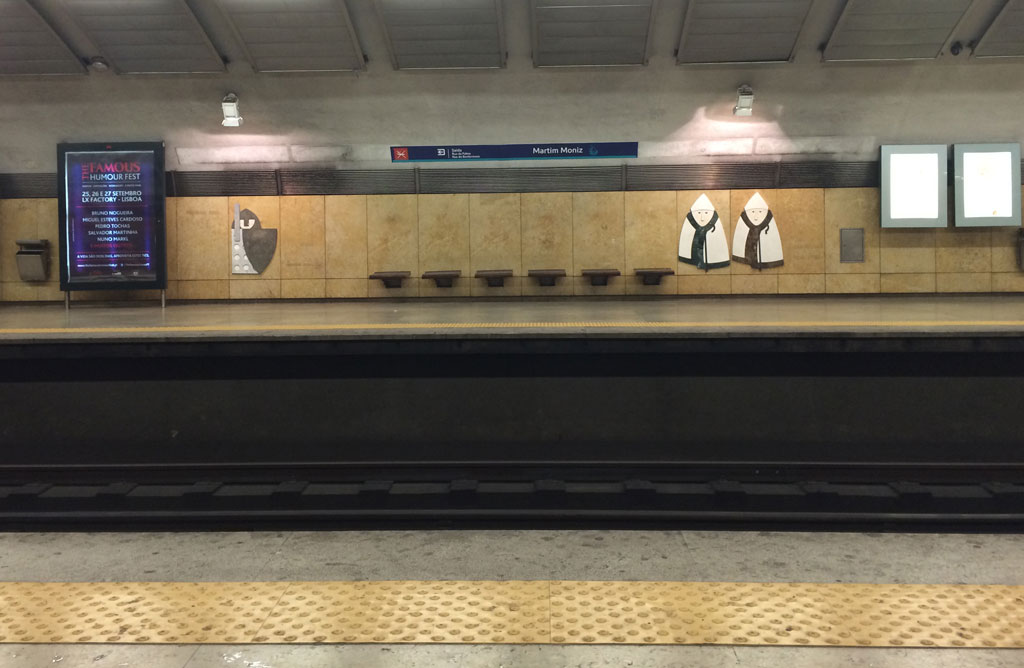 Inside the metro at Martim Moniz

The metro looks much the same as any other metro in the world though we’ve read that there are art displays. The trains take a long time to come and, at 4.30 pm, are not very crowded. We already have our Zapping Transport Card* which makes things easier. 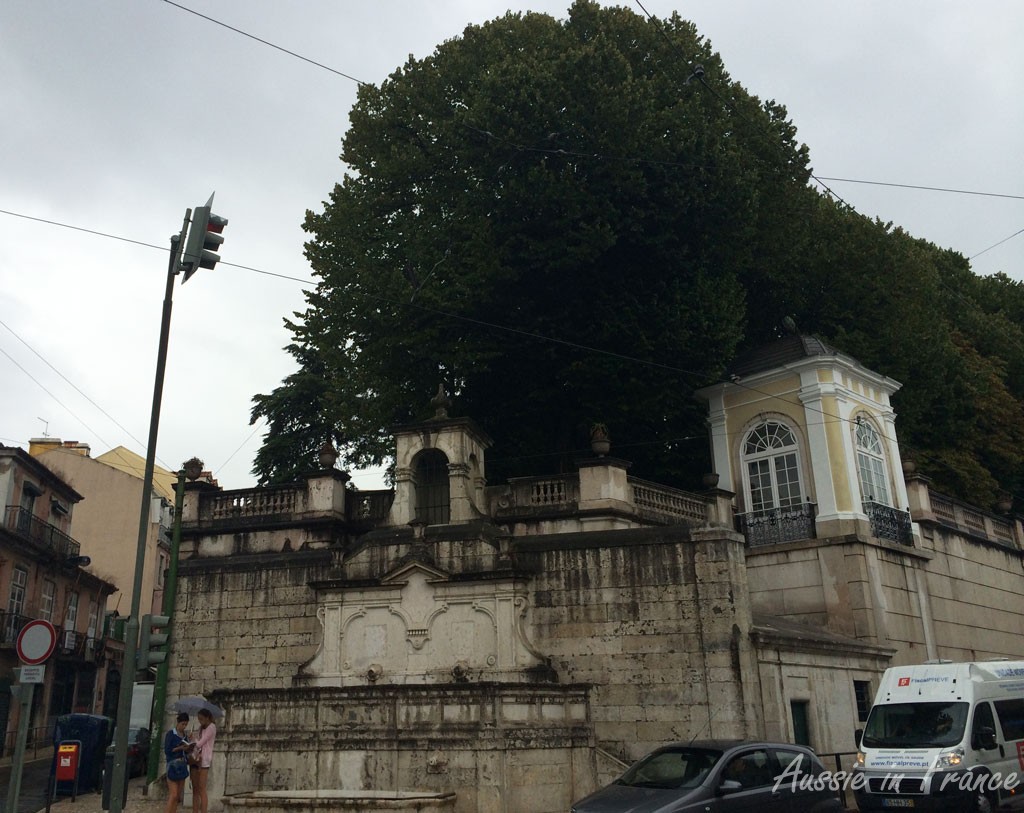 When we emerge at Rato station, just next to Pasteleria 1800, the sun is out again – but not for long. We arrive home to a loud television above us  but the dog doesn’t start barking for another hour or so. I sleep on the sofa for a while and feel much better afterwards. I’m hoping it will rain most of the night – to drown out the other noise and leave room for the sun tomorrow!

*Zapping Transport Card: a little complicated but good explanation on http://www.metrolisboa.pt/eng/customer-info/information-on-fares/. Unless you take public transport more than 5 times a day, it’s the best solution and means you don’t have to worry about buying tickets.

This entry was posted in Architecture, Portugal, Sightseeing and tagged lisbon, pasterlaria 1800. Bookmark the permalink.

3 Responses to Lisbon in the Rain and More Great Panoramas