One broken and two stolen iphones

Posted on September 8, 2014 by Rosemary Kneipp

Am I jinxed? Is it because I love my iPhone too much? Is this a subtle message from the Cosmos? Beware, this could talk a long time to tell. You might need a glass of wine. 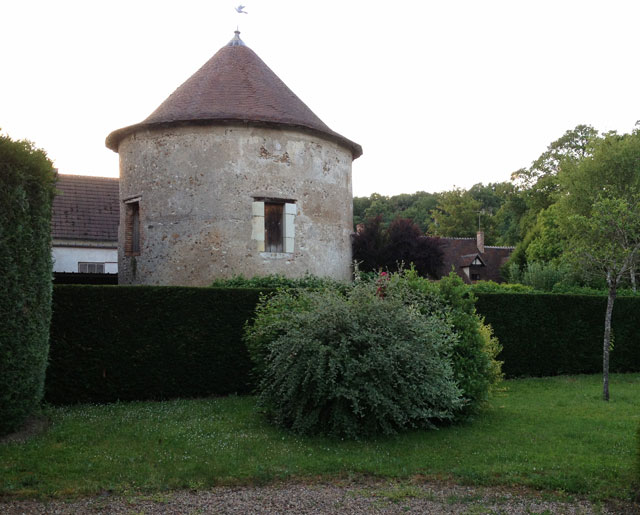 The Renovated Pigeon House photographed before I dropped the iPhone

One beautiful twilight evening in May, as we were strolling around our neighbourhood in Blois, I wanted to take a photo of a renovated pigeon house but the gate was spoiling the view so I slipped my black iPhone 4S behind the bars. And it dropped. Just like that. And smashed. On the gravel below.

Jean Michel had to climb the gate because no one was home. Not a point in my favour.

Since it is insured against breakage I phoned the insurance company, SRP. I was informed that during the repairs (which could take a couple of weeks), I could have an iPhone on loan as it was part of my insurance.

The replacement iPhone, provided by Orange, was scheduled to arrive next day by Chronopost. Efficient, huh? Well, it didn’t every reach me. It took several days of phoning various people to be told I had to go to the police station to report it as being stolen. The Chronopost website said it had been delivered and signed for. Reporting the theft was not an easy task as I had to argue with the police officer who said I needed the IMEI (International Mobile Equipment Identity) to lodge a complaint.

I didn’t have the IMEI because it wasn’t my Iphone. A more intelligent police officer (that wasn’t hard!) then agreed to register the complaint without the IMEI. I phoned Orange in front of the police officer but I was told it would take two weeks to have the number sent to me by post.

In the meantime, I had to send two documents to the insurance company three times – by email, by uploading them to their website and by snail mail – before they finally registered my request to have the broken glass cover repaired.

But time was running out. The case of the stolen iPhone had not been solved so I couldn’t have a second substitute iPhone while the broken one was being repaired and we were going away on holidays. So I bought a new IPhone, this time a 5 because Jean Michel said he’d take the 4S when it was repaired.

When I ordered the iPhone 5 over the phone, I hadn’t done my homework properly and got talked into a hot pink 5C whose camera isn’t as good as the 5S but which is considerably cheaper. When it arrived at the Orange shop in Blois (I was not taking any more chances with the post), I went bananas. When I saw it, I knew that I did not want a hot pink iPHone and the only cases I could buy were Micky Mouse and company. A second point against me, maybe even three or four.

I sent it back by Colissimo, paying extra to have it totally insured in case this one disappeared too, then I phoned Orange to order another one once the return had been cleared (this alone required quite a bit of insistence).

The next bit is embarrassing and cost me at least ten points. Feeling fragile and jaded by now, I lost it when I ordered the next one and chose a gold 5S. How stupid can you get? If you want to attract an iPhone thief, buy a gold phone. Almost as soon as I got off the phone, I regretted my purchase. It took me an hour to decide to phone back. I was told that there was no problem – the order had not been sent so I could have a black one instead. Relief.

However, I had been told a lie because I received an SMS saying that my gold iPhone order was being processed. No amount of patience or yelling at Orange made any difference. The only way to have a black one was to refuse the gold one when it arrived at the depot, wait for the return to be cleared (2 weeks), order a black one then wait for it to be delivered. We were about to go on our German cycling holiday by then. I was losing more points by the minute. 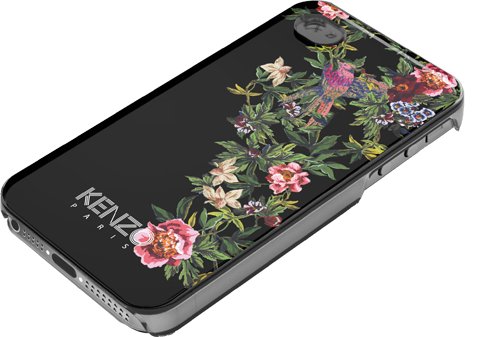 My Kenzo cover except that the sides of my iPhone are white.

In the end, I decided I would take the gold one which, incidentally turned out to be a sort of burnished colour that doesn’t look even remotely gold, and order the chic-looking black Kenzo case with roses on it that I had been coveting for some time.

The smashed iPhone is sent for repairs

When I was in the car (as a passenger) on the way to Germany, I received a phone call from Orange concerning the gold/black iPhone mess. We don’t want you to have a phone you don’t want, said the lady (???). I explained that I had decided to make do with the gold one and was more interested in having SRP looking after the broken one now (I had still not been told where to sent it). She said she’d make sure I received the instructions for having it repaired as soon as possible.

On 21st July, immediately after we got back from our holiday, I sent off the broken iPhone to the address I had received by email. I would just like to add that there is no way of talking to SRP because you consistenly get a message saying to ring back later.

About a week later, I received a no-reply email from SRP telling me to wipe all my data off the iPhone and giving instructions to do so remotely, which I did.

No news of the smashed iPhone

I did not hear back from them during the month of August but since most places shut down completely anyway, I didn’t think that it was worth pursuing. I scheduled the follow-up for 3rd September since I thought the staff would need a couple of days to tell their co-workers about their summer holidays before they would deal with call.

Then, out of the blue, on 2nd September, about 6 pm, I received a phone call from a man who told me that he had bought an iPhone with a broken case via leboncoin.com for 150 euro but couldn’t use it because it was blocked. A message gave him my number to ring (this is due to Apple’s tracking system).

The smashed iPhone turns up in someone else’s hands

I was completely taken aback. How could someone else have my iPhone, which was supposed to be being repaired by the insurance company? I explained my story and said I’d ring him back after I’d spoken to the insurance company but that I certainly wouldn’t want to pay him 150 euro for my own phone. He reassured me that he would simply give it back to me.

Next day, after many phone calls, I finally managed to declare that my iPhone had been stolen some time between when I sent it by Colissimo and the man’s phone call. I checked the Colissimo website and saw that the last time it had been seen was at the distribution centre in Val d’Oise which meant that SRP had never received it.

I phoned Colissimo and was told that it would take a maximum of 21 days to complete their inquiry and get back to me. That’s when I discovered that I had omitted to ask for extra insurance and would be reimbursed a total of 4 euros if, indeed, they were responsible for the disappearance of my iPhone. I am no longer covered by SPB for that iPhone because the insurance was transferred to my new iPhone as soon as I activated it.

Back to the police station

So  I decided to go and report the theft to the police immediately. The odious police officer from the time before recognised me and my lot fell to the least intelligent police woman on duty who took a full hour to lodge my complaint because she found the story so complicated. She was not aided by the fact that she held multiple conversations with any colleague who came in sight and there were a lot of them because there was a complete change of staff while I was there. 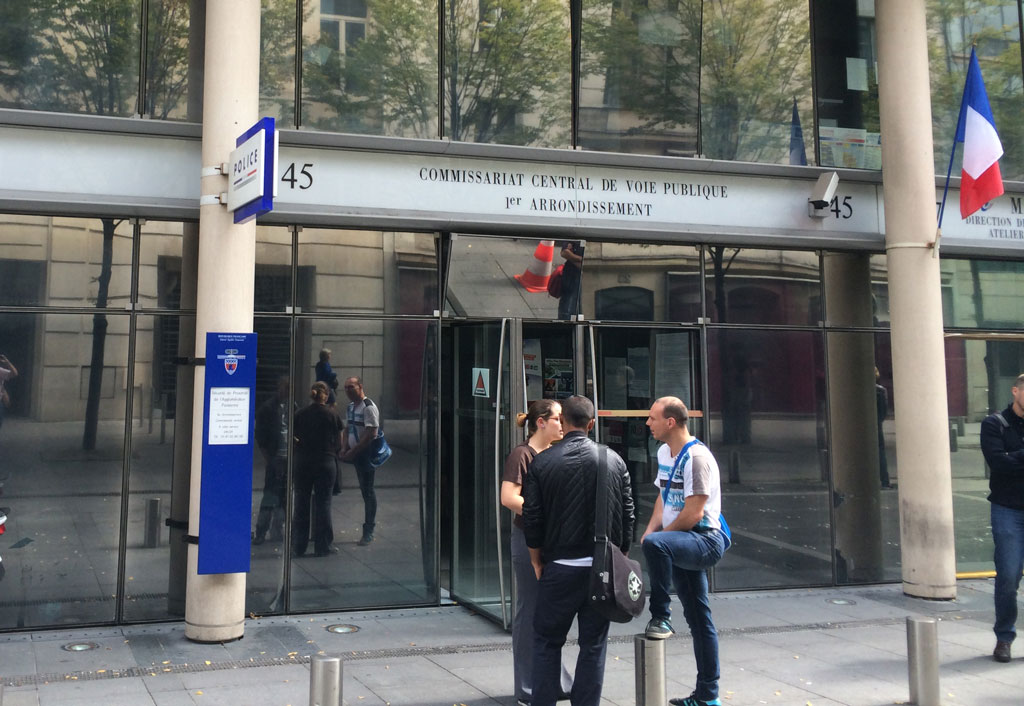 The police station from the outside – I didn’t know how they’d react to a photo inside!

Before I read and signed the complaint despite the multiple spelling errors, I phoned the man with iPhone back but I was only able to leave a voice message.

The new iPhone owner calls back

He rang me back later and I tried to get the story right. He explained that he works in IT and had the cover replaced by a friend but it cost him 110 euro (not that he was asking for any money, he said, that was his own problem and would teach him not to buy over the internet). He said, though, that he could have the broken cover put back on (you’d wonder how that would be possible considering the fact that the front was completely smashed).

I told him I’d ring him again after talking to Jean Michel to work out when we could go and collect it and he said he could organise things directly with JM. He even gave me his name.

The sad demise of the smashed iPhone

But Jean Michel does not want us to pursue the matter. He says he doesn’t want an iPhone that has been messed around with. Which I can understand. So I think I’ll just have to write it off as a complete loss. But I still love my iPhone 5S!

P.S. Just discovered that 220 euros have been deducted from my account for the stolen replacement iPhone. Now I have to look after that as well!

This entry was posted in French customs, Lifestyle, Paris and tagged broken iphone, stolen iphone in france. Bookmark the permalink.

8 Responses to One broken and two stolen iphones