Sintra – A Lovely Palace and a Yellow Monster

Posted on September 22, 2014 by Rosemary Kneipp

We’ve checked the weather and it looks like it isn’t going to rain. We walk down to Rossio Station to take the train to Sintra. We’re amazed to see the long queue of people, even at the ticket machines. We soon understand why – the system is quite complicated because of the Via Viagem travel card. 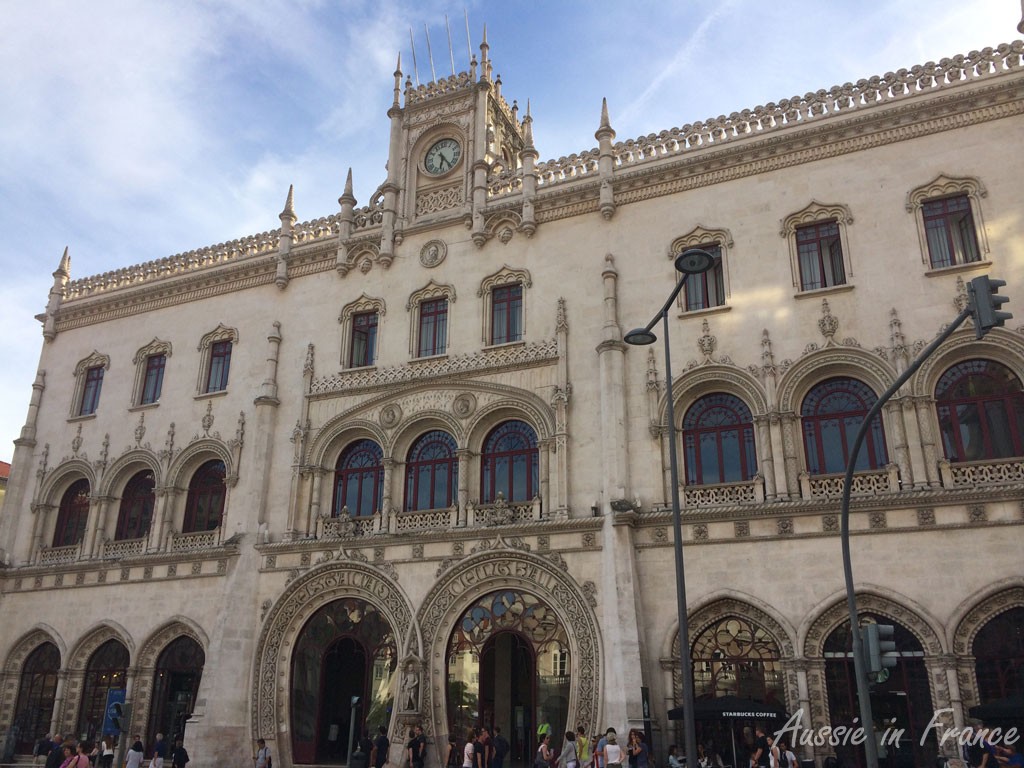 If all these people are going to Sintra, I think, it’s going to be very busy. However, we easily get a seat, the windows are clean (unlike the train to Charles de Gaulle airport in Paris!) and it is a comfortable 40 minutes to our destination. As soon as we get out of the train, it feels like we’re in a different part of the world. 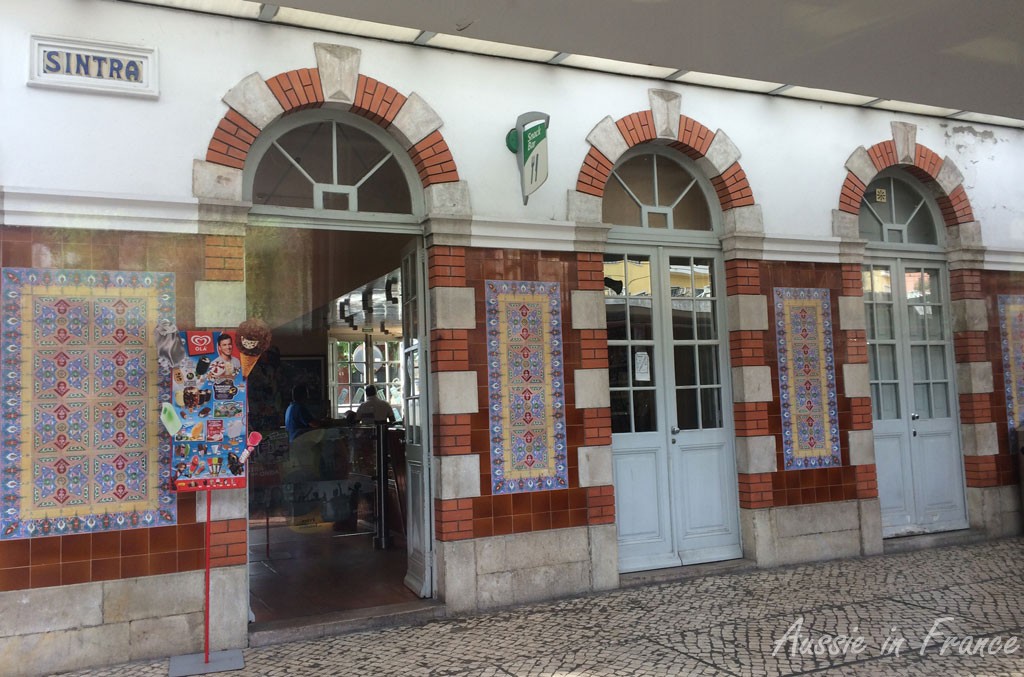 The charm that is often lacking in Lisbon abounds in Sintra. It’s cooler and we are surrounded by what looks like a tropical forest. We stop for coffee and a cake at a little café opposite a house covered in bougainvillea. I order a cappuccino for the first and last time. Jean Michel wants a bigger cake than the pastel de nata that I choose. It turns out to contain ham … 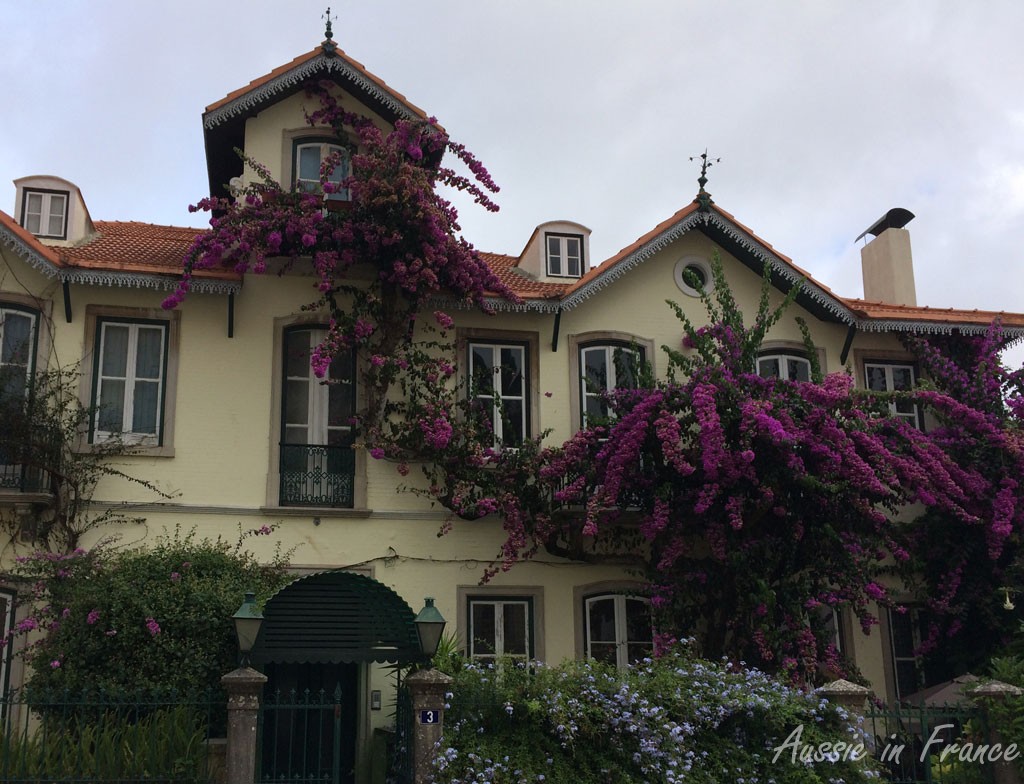 House with bougainvillea opposite our tea shop

To quote the Unesco World Heritage Site: “In the 19th century Sintra became the first centre of European Romantic architecture. Ferdinand II turned a ruined monastery into a castle where this new sensitivity was displayed in the use of Gothic, Egyptian, Moorish and Renaissance elements and in the creation of a park blending local and exotic species of trees. Other fine dwellings, built along the same lines in the surrounding serra , created a unique combination of parks and gardens which influenced the development of landscape architecture throughout Europe.” 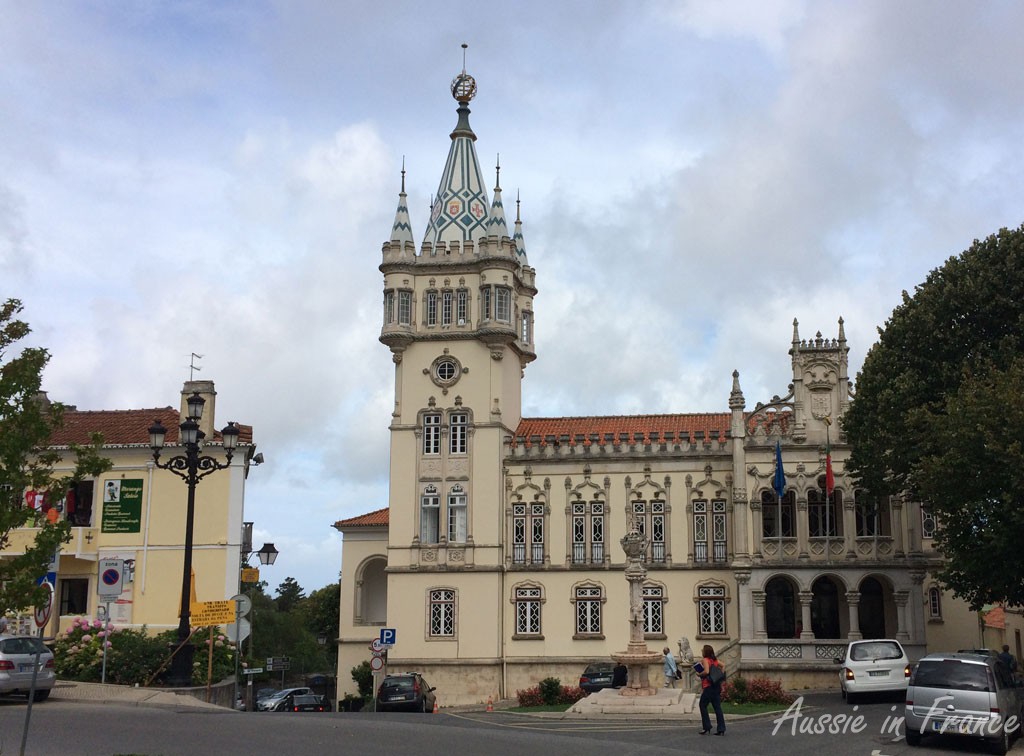 A very romantic-looking building near the train station in Sintra

We start walking up the hill towards the castle. The promenade is quite delightful, with forest on both sides and modern sculptures and views of the palace and town along the way. 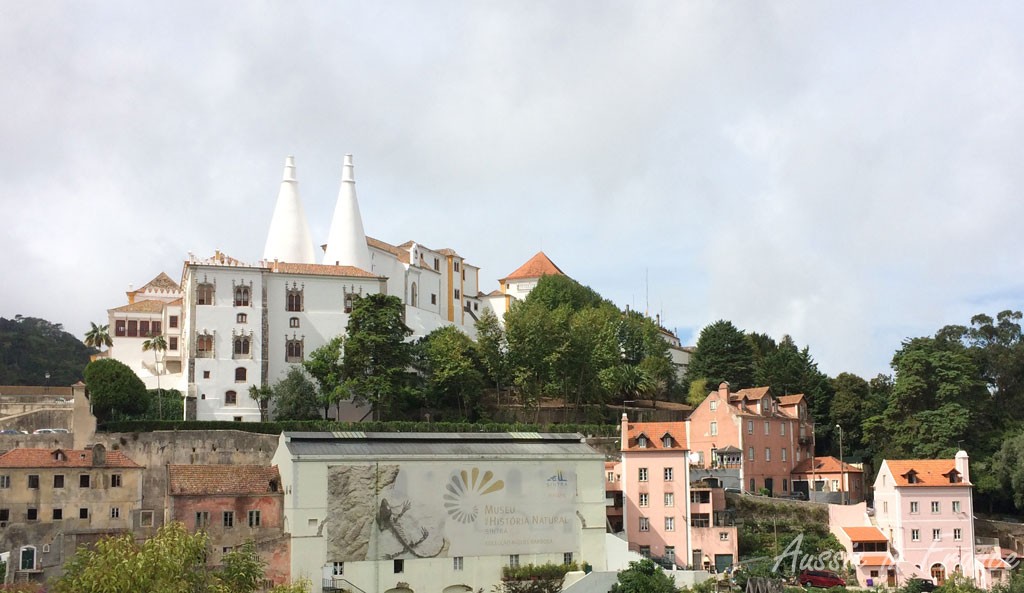 Our first view of the castle

The white royal palace with its two tall chimneys looms into sight. It was probably constructed on the site of the Moorish Alcazar and its buildings result from two main periods (15th and 16th centuries). We buy a double ticket to the palace and nearby Pema Castle for 22 euro each and begin our visit. 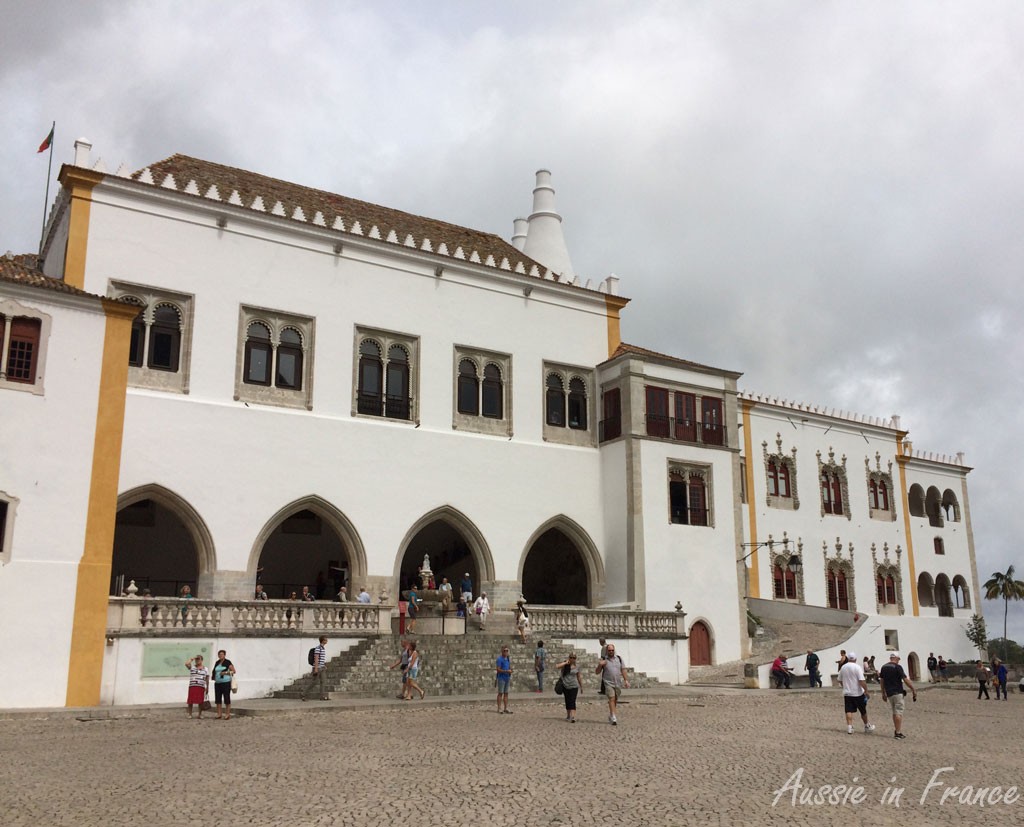 The first thing I see are what look like leather Henri II chairs and a table, similar to those in Blois castle. We go from one room to the next, admiring the beautiful azulejos tiles of which there is a different set in each room, the unusual ceilings and intricately carved furniture, harmoniously blending Gothic, Moorish and Renaissance elements. 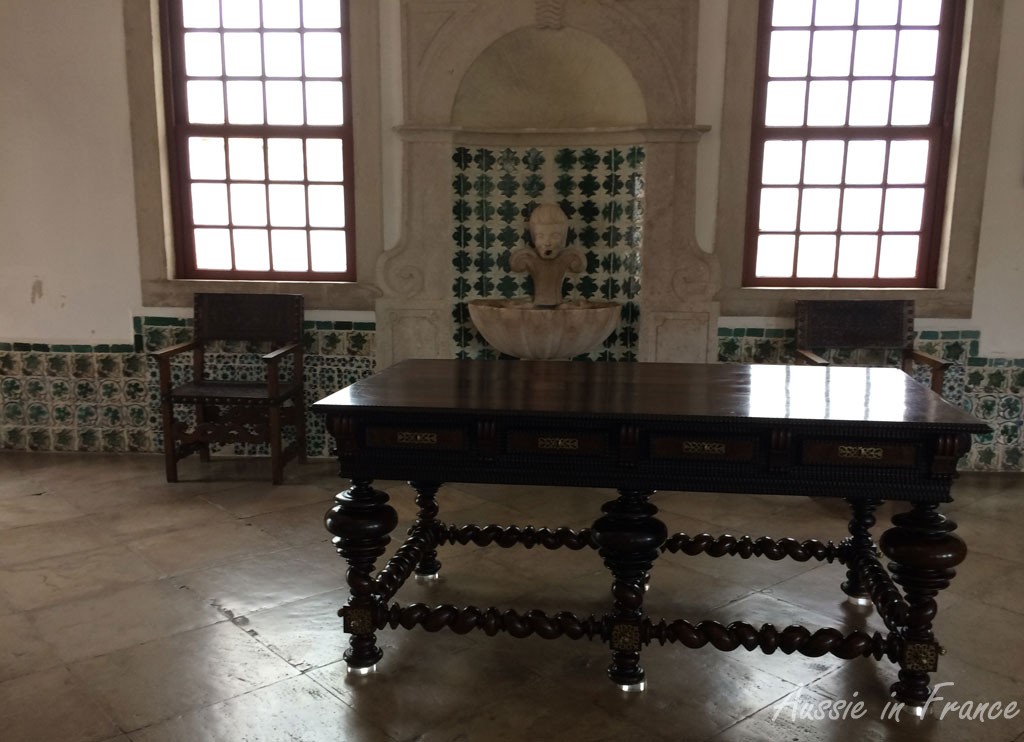 Henri II table and chairs with azulejos in the background

Lovely little patios lead off the main rooms and there are views in every direction. 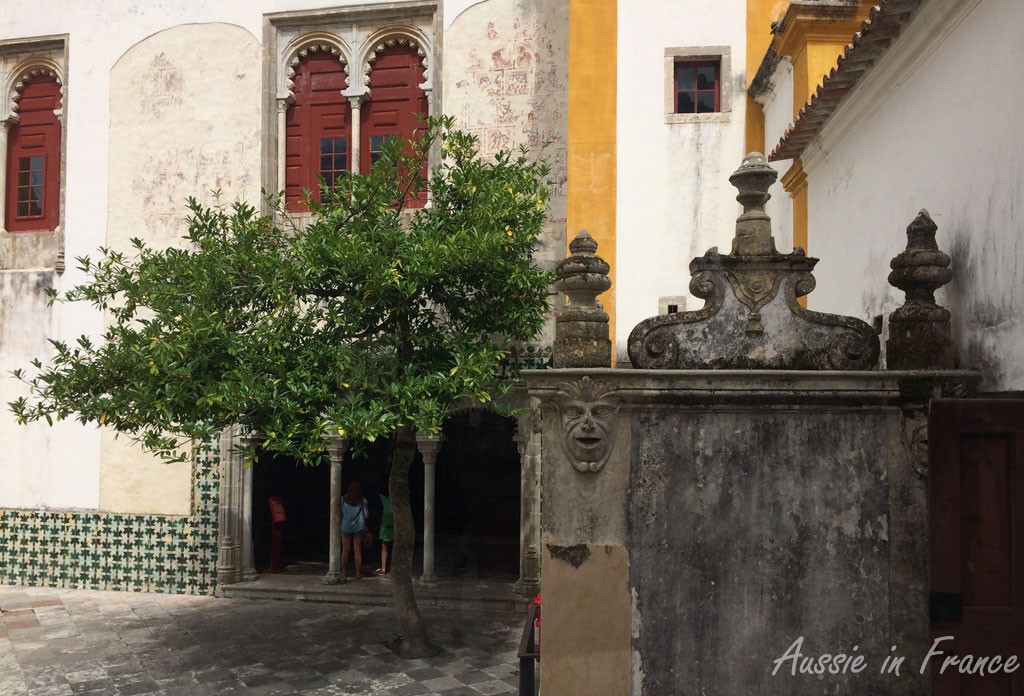 A typical patio in the palace

My favourite is the breathtaking Heraldry Room, built in 1515 to 1518, with its magnificent coffered domed ceiling. It reminds me of the beautiful rococco libraries along the Danube, such as Melk and Wiblingen Abbeys, except that the scenes on the walls are blue and white tiles. 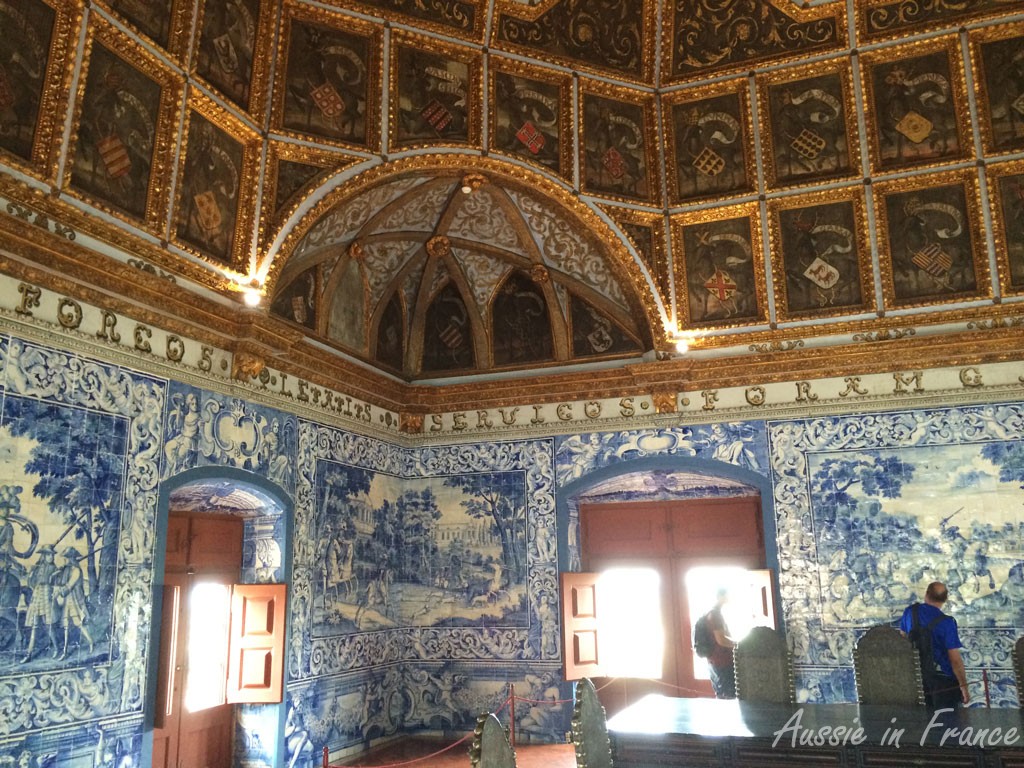 The Heraldry Room with its beautiful blue and white azulejos 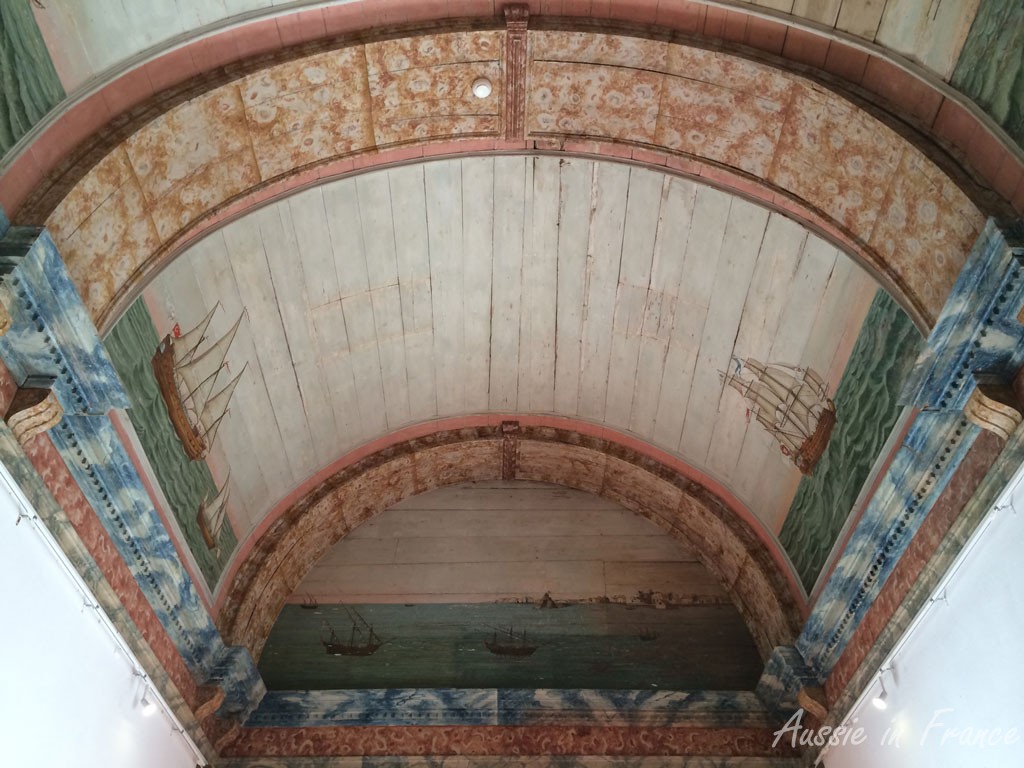 The ceiling of the Galley Room

By the time we finish it’s 1.30 and time for lunch. We wander off into the very touristy old town, with its steep little streets and I eventually see a sign saying Miradouro (panorama) providing an excellent view of the palace and surrounding countryside, including the steeple in the second photo. 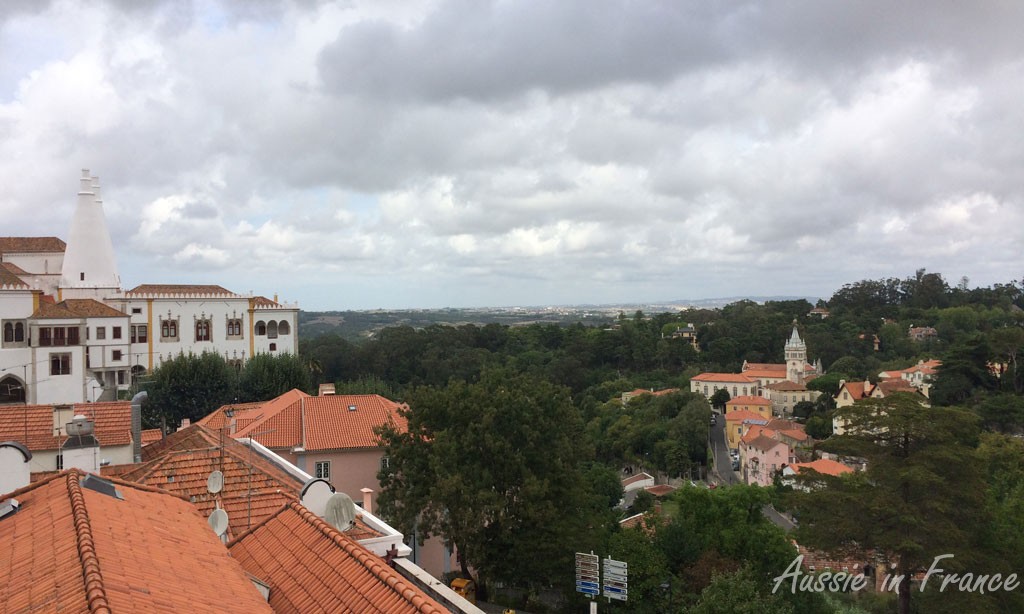 There is also a little restaurant called Miradouro da Villa that still has a free table on the minute terrace. We are soon esconced on our high stools and can watch other people coming to “ooh” and “aah” over the view and take selfies. 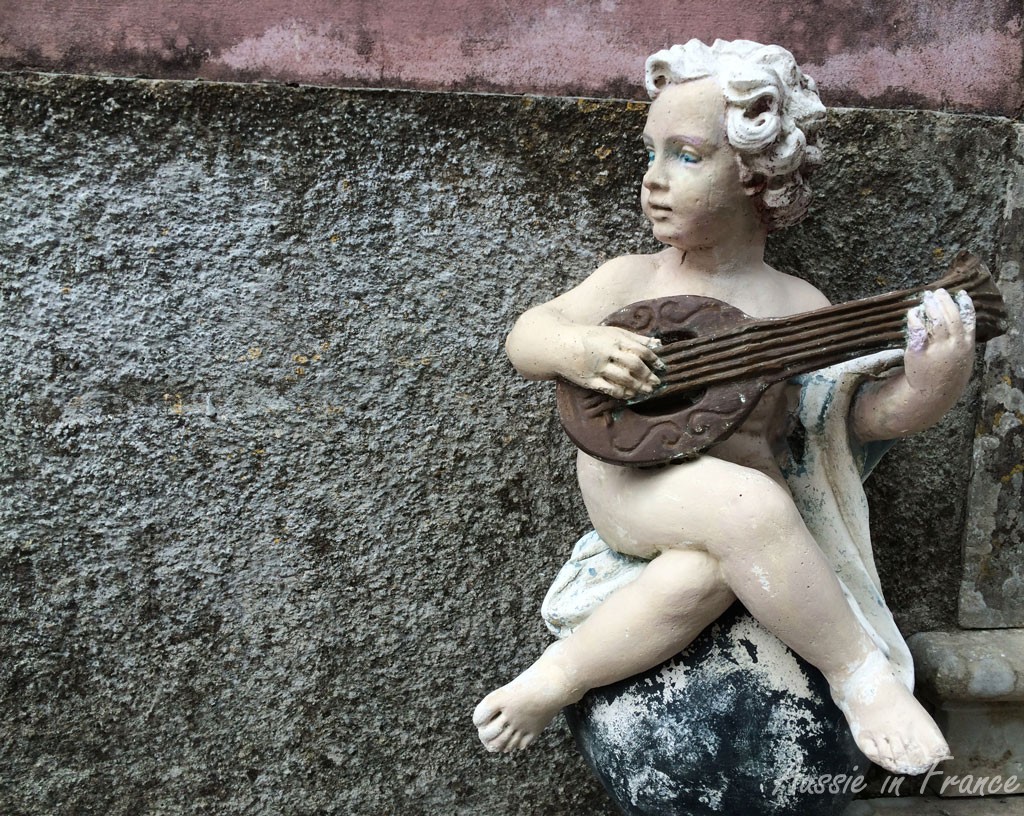 A little cherub on the road up to the restaurant

We order pork spare ribs, rice and salad and a ½ bottle of local red wine. There are no half-bottles left so the waiter suggests wine by the glass, although he warns us to drink it slowly so it won’t go to our head! One glass doesn’t seem to do much harm and although it has no nose it is a dark red and full bodied. 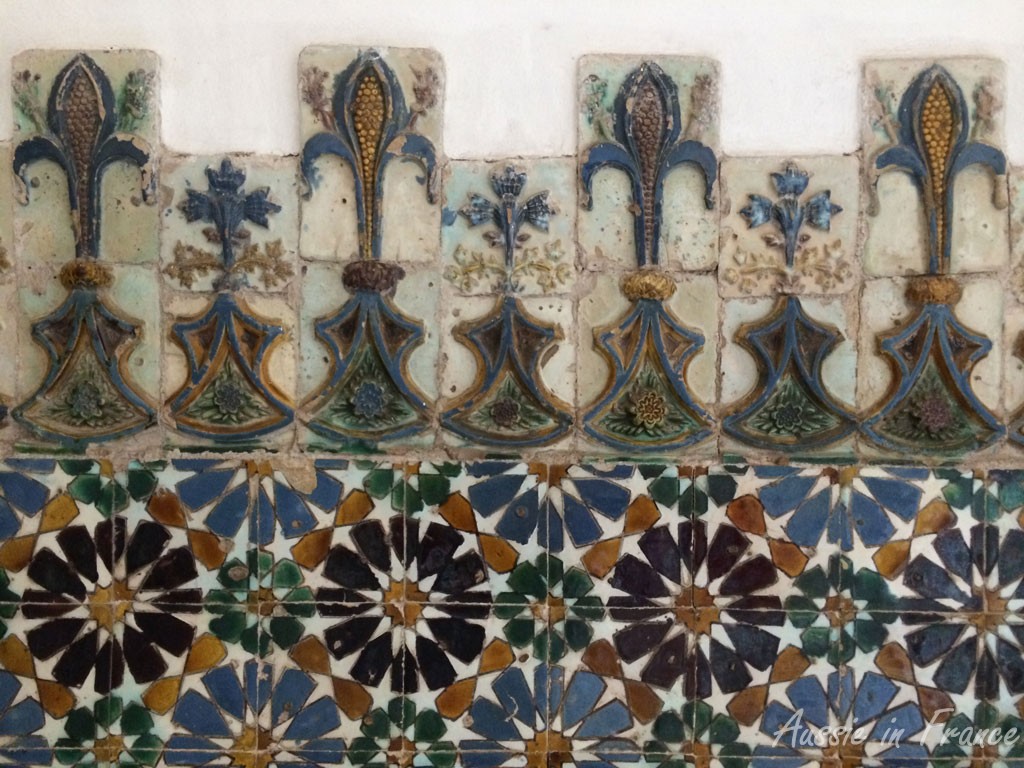 At 28.40 euros for both of us, including olives and coffee, the restaurant with its beautiful view and quiet surroundings is an excellent choice.

Now we’re ready for the next part of our visit – Pena Palace, the most visited monument in Portugal. We take a return ticket for the local hop on, hop off bus which stops at the train station and in front of the tourist office in Sintra (tickets on board) (5 euros each). For the entire 15-minute ride to the palace, up a steep winding road, it pelts with rain! Just as we reach the bus stop, the rain stops. Good timing indeed. 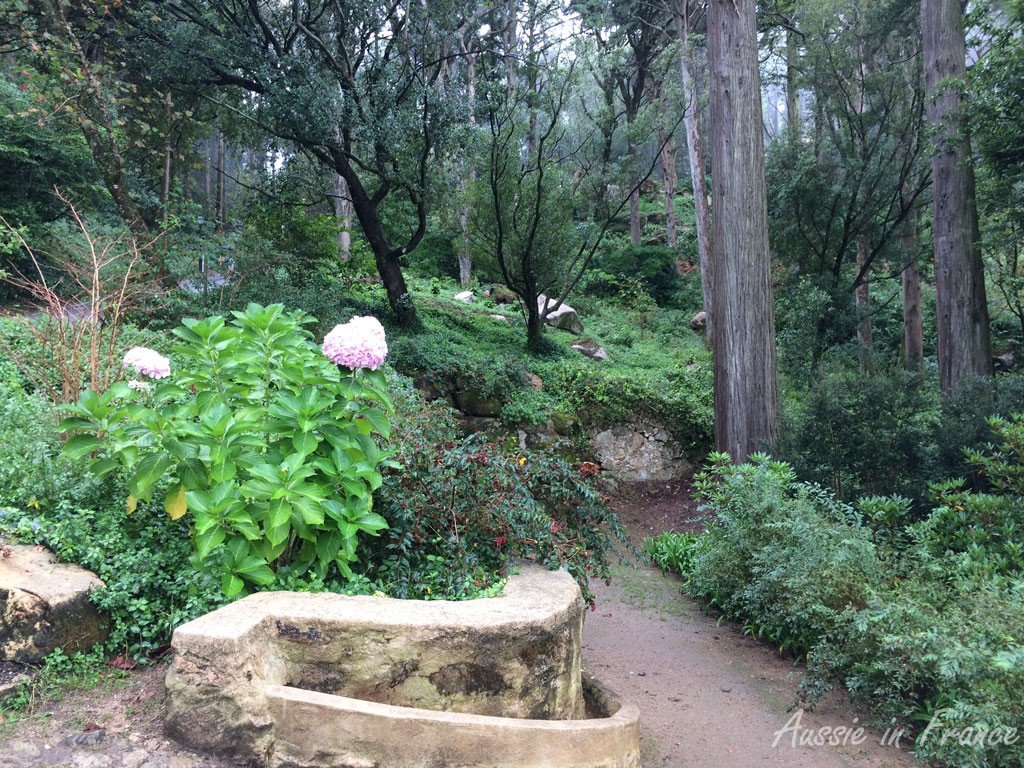 The forest road up to Pena Castle

We have the choice of either walking for 15 minutes up a pleasant path to the palace or taking a 3 euro bus. We walk of course. 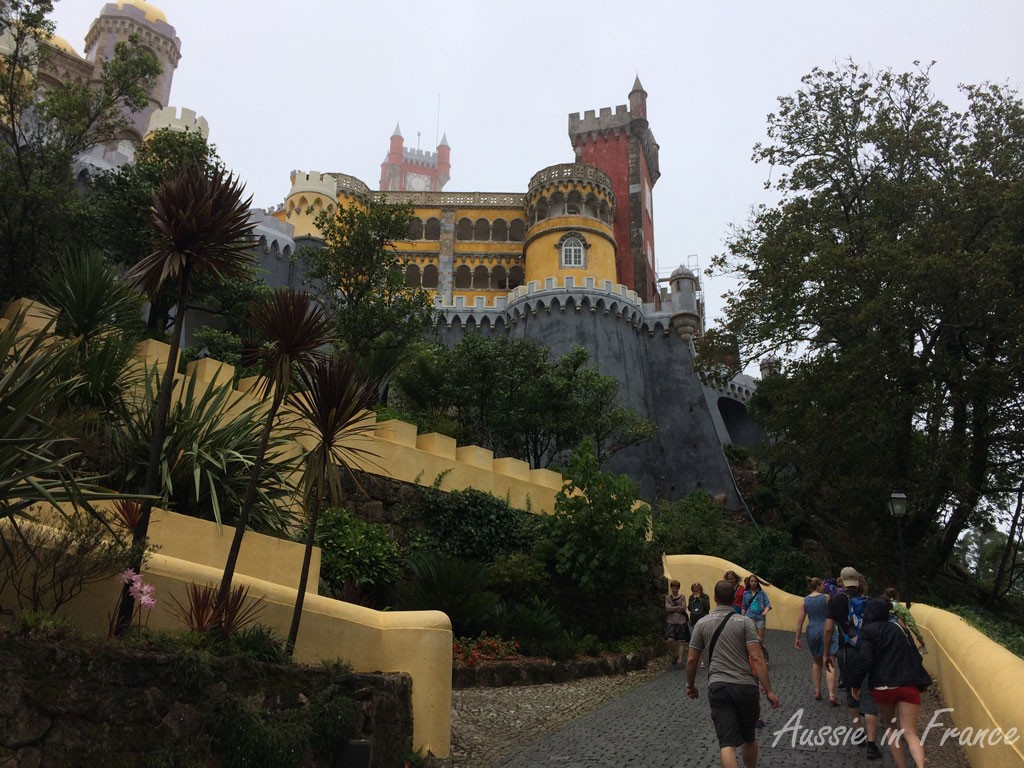 The path up to the castle

By now, the palace is more visible. It looks like a pink and yellow Walt Disney castle and I think it is ghastly. Built in the 19th century, it is considered to be a work of pure Romanticism, designed by the Portuguese architect Possidónio da Silva. 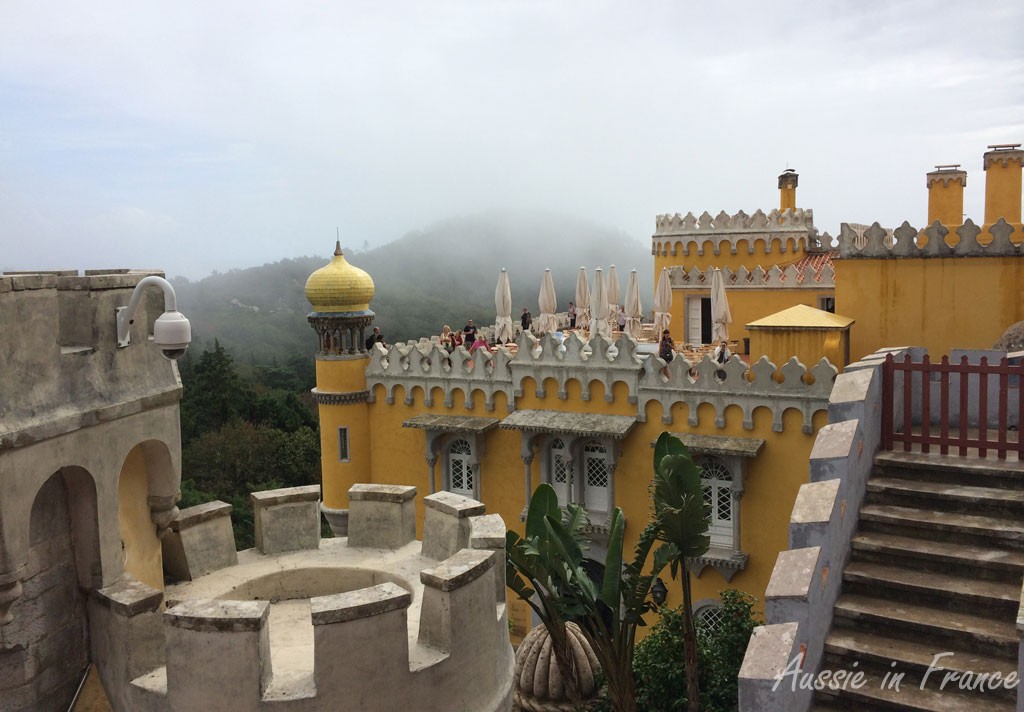 Mist at the top of the castle

Inside, however, are the richly decorated church, two-storey cloister and refectory of the monastery built by King Manuel 1 and donated to the order of Saint Jerome following a visit by King John II in 1493, accompanied by his wife Queen Leonor, who made a pilgrimage to a chapel dedicated to Our Lady of Pena built, it seems, after an apparition of the Virgin Mary. 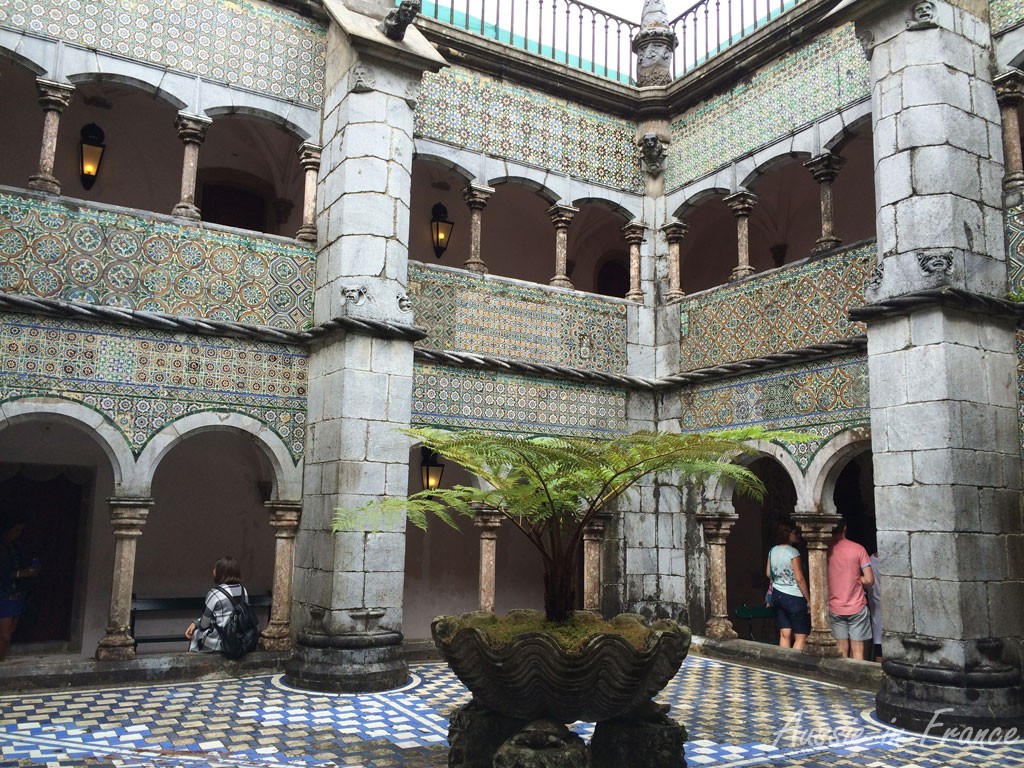 For centuries, Pena was a small, quite place of meditation, housing a maximum of eighteen monks. I wonder what they would say if they could see the Disney castle and swarms of tourists today! 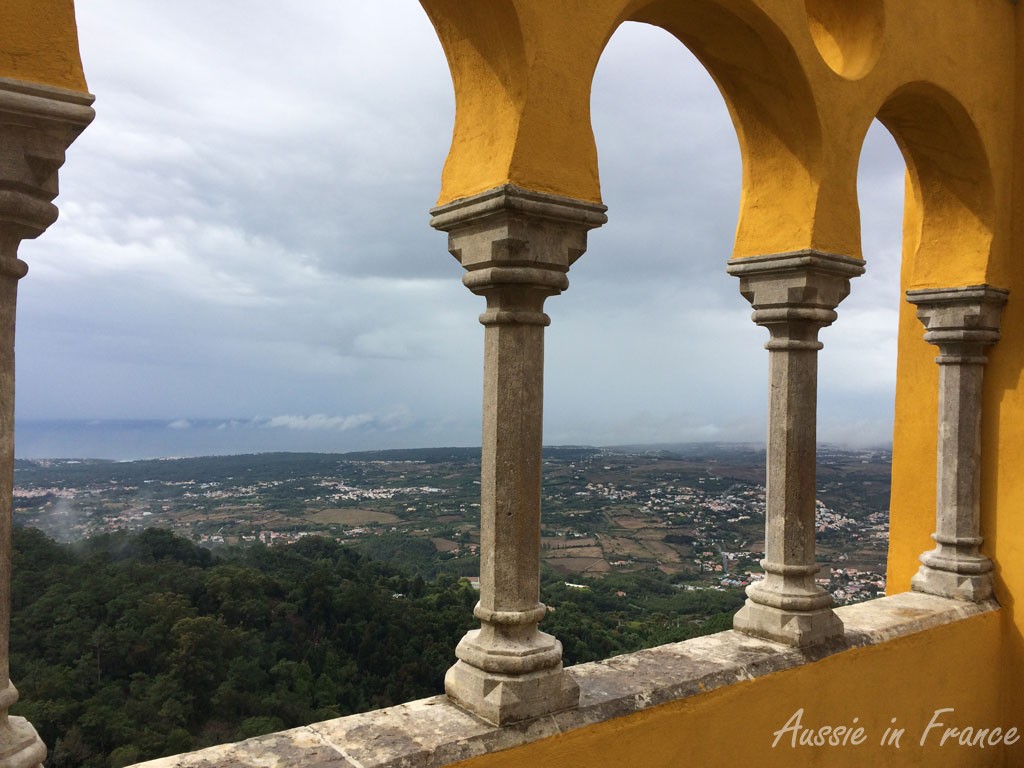 Both the monks and royal family certainly enjoyed a wonderful view

Lightning first damaged the monastery in the 18th century but the famous earthquake of 1755 reduced it to ruins. The marble and alabaster chapel, however, remained relatively unscathed. 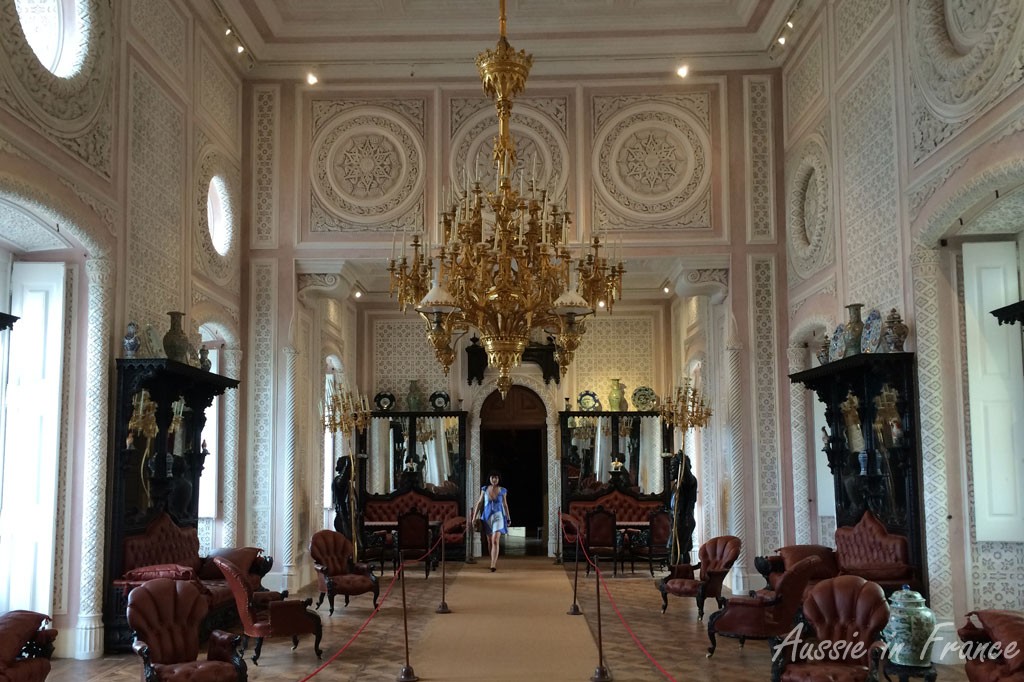 The “family room” with its Islamic and Renaissance features

It was left to rack and ruin until 1838 when the young prince Ferdinand who was a bit of a nature lover acquired the old monastery and much of the surrounding land. He turned it into a palace to be used as a summer residence for the Portuguese royal family. The work was entrusted to a German mining engineer, Wilhelm Ludwig von Eschwege, which is why it is reminiscent of some of the castles along the Rhine. 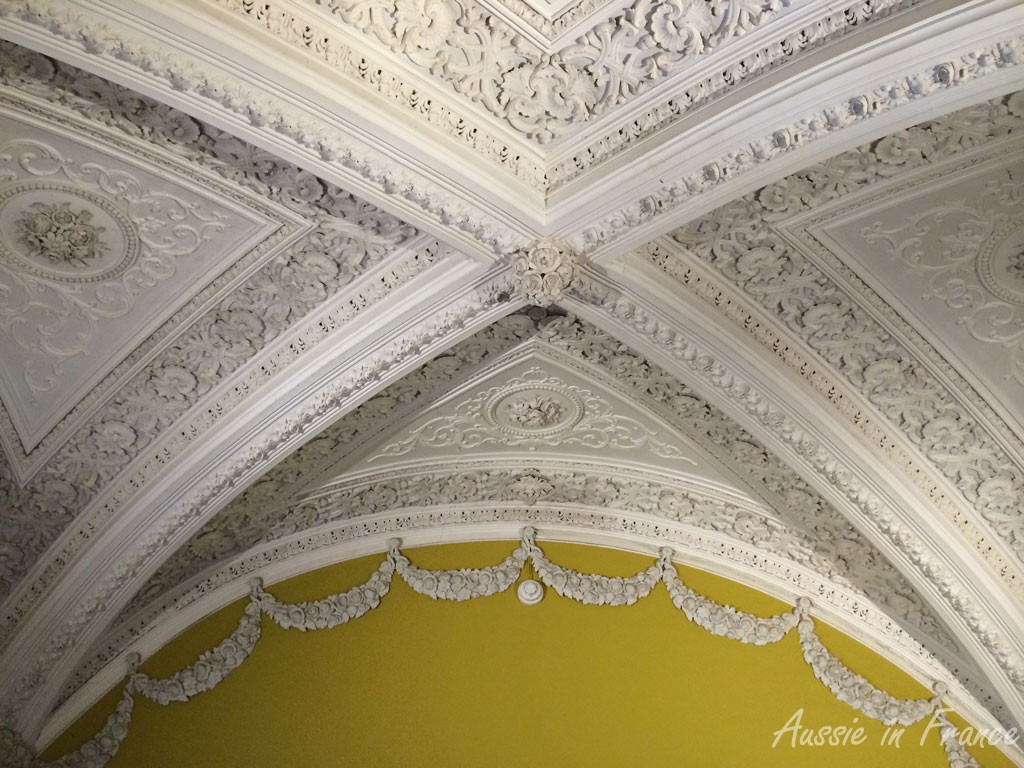 One of the beautiful vaulted ceilings inside the castle

The King suggested that vaulted arches and mediaeval and Islamic elements be included and Queen Maria looked after a lot of the decoration and symbolism.

We decide not to visit the nearby Palace of Montserrate designed for Sir Francis Cook by the distinguished British architect, James Knowles Jr, an example of mid-19th-century eclecticism, combining neo-Gothicism with substantial elements derived from the architecture of India. Two palaces are enough in one day. 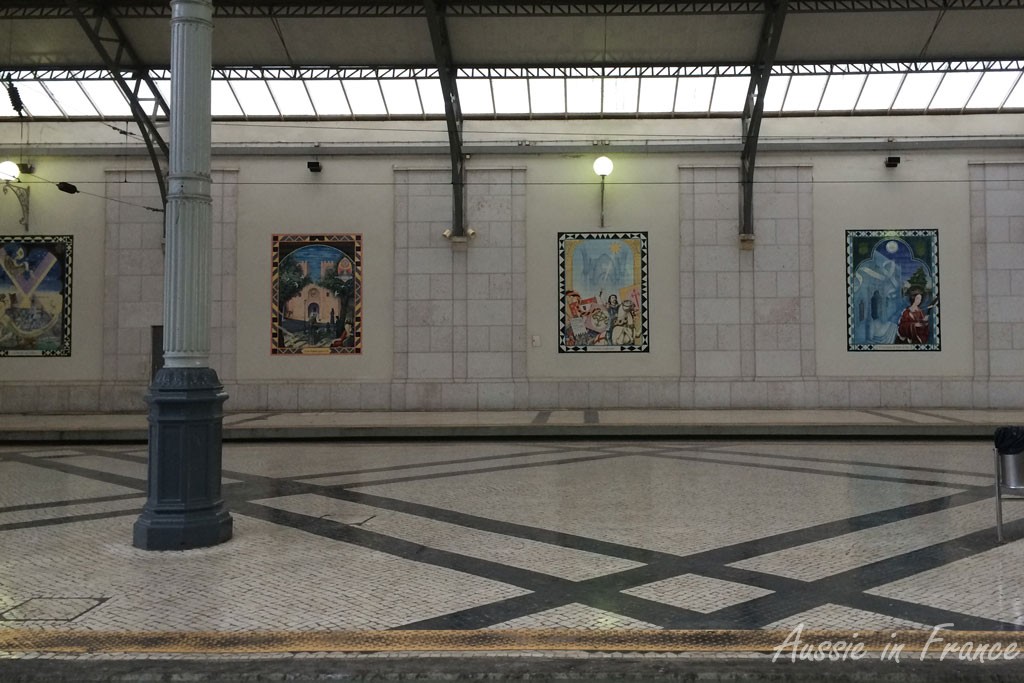 The art work inside Rossio Station

Instead, we walk down a fairly steep path to pick up the hop on hop off bus at the second last stop as we think there might be quite a few people waiting at the main entrance at this time of the day, but we needn’t have worried. There is plenty of room. We arrive at the station just as our train is about to pull out. Back at Rossio Station, we have time to enjoy the artwork on the walls.

How to Get to Sintra: Trip Advisor has excellent advice. Click here.
To use the Via Viagem card: See the metrolisboa website

This entry was posted in Architecture, Art, Flowers & gardens, Portugal, Restaurants and tagged hop on hop off bus in Sintra, how to get to sintra, Pena Palace, Rossio train station, Sintra, Sintra National Palace, via viagem. Bookmark the permalink.

8 Responses to Sintra – A Lovely Palace and a Yellow Monster