Posted on October 1, 2014 by Rosemary Kneipp

This week’s Blogger Round-Up begins with Wendy Hollands from Le Franco Phoney who has some very interesting information for the female element, as my father used to say, but you have to read to the end of post to discover what it is. Next, a blog that I haven’t featured before called Le Chic en Rose by another Rosemary, with some very useful information on travelling by train in Switzerland during the winter. To finish off, Mary Kay from Out and About in Paris, with her usual savvy, found an unusual venue during the European Heritage days in September – the world’s oldest basketball court! Enjoy!

You just don’t see this in the city 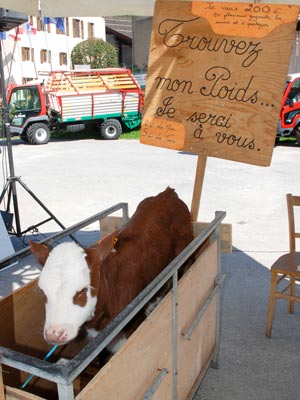 Some things are a bit different here in the countryside of France. For instance, how many cities offer a calf as a prize? Here in La Clusaz, it’s a regular thing. You might remember the raffle last year, and now, if you guess the right weight of this calf, she’s yours. She’s worth €200, and if more than one person guesses the weight, the winners share the prize. I’m not quite sure how you share a calf. I guess you take a share of the money instead. Or, as a French friend suggested, meat tray time!

Hang on, hang on. Don’t get too worried just yet. For a start, this is a dairy cow, so she will enjoy eating grass for many more years yet. Also, she was on offer at the Foire de la Croix in La Clusaz last weekend, which is basically a giant cow exchange. Think stock exchange, with moos and poos. Read more

by Rosemary from Le Chic en Rose, initially from Yorkshire, now living in Perth in Western Australia who writes of the many things that inspire her including travel, fashion, history, learning languages and spending time with her family 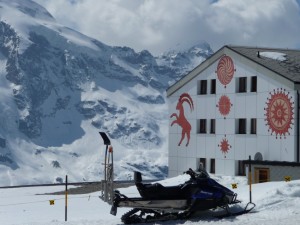 I first went to Switzerland as an 18 year old backpacker with a couple of friends when we could just about afford to get by on bread and cheese from the local Migros. It is certainly not the cheapest destination by any stretch of the imagination! If you are planning on visiting then the Swiss Pass is a must. If you get the timing right you can often get good deals at low season (such as April between the winter skiing and summer hiking seasons). The pass gives you unlimited rail (and bus) travel for 4, 8, 15, 22 days or one month, “free” travel on the boat services on the lakes and admission to 470 Swiss museums. Read more

The World’s Oldest Basketball Court is in Paris 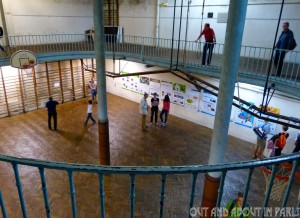 The court is an exact replica of the one in Springfield, Massachusetts where the game was played for the very first time. On January 20, 1892, Canadian doctor James Naismith introduced basketball, a game intended to keep the students of the International YMCA Training School active during the winter months. Read more

This entry was posted in French customs, Paris, Switzerland and tagged oldest basketball court in the world, the urinette, travelling by train in Switzerland. Bookmark the permalink.

3 Responses to Weekly Blogger Round-Up: The Urinette – Railing it in Switzerland – Oldest Basketball Court in Paris