Posted on December 3, 2014 by Rosemary Kneipp

It’s not really an office. That’s the word Jean Michel uses in French; it means a place next to the kitchen or dining room in which the table service is prepared. Well, it’s sort of that.  I would call it an upstairs kitchen but Jean Michel has names for all the rooms so I’m happy to call it an office. The bureau is downstairs. 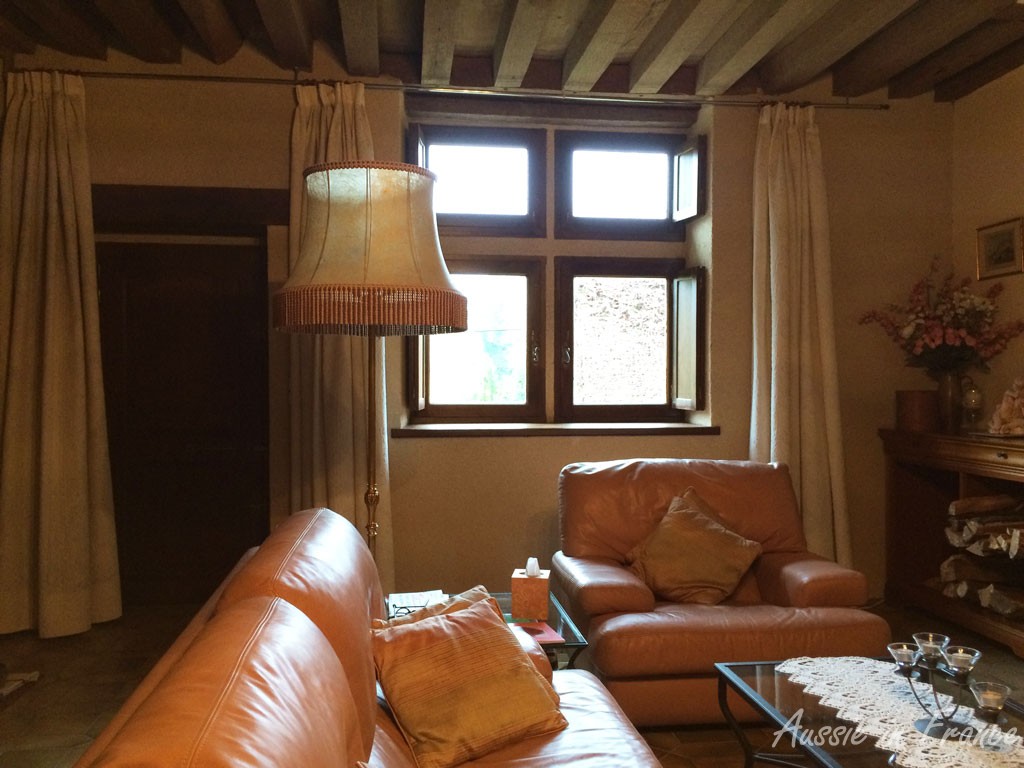 Closerie Falaiseau, our late 16th century house, has a funny layout. Despite its 200 square metres, it only has two bedrooms. The upstairs living room is where our Renaissance fireplace is and it is probably the most pleasant room in the house. It has large proportions, lots of light (and it will have even more when the solid door becomes a glass door), a view out the mullion windows and, of course, the fireplace. 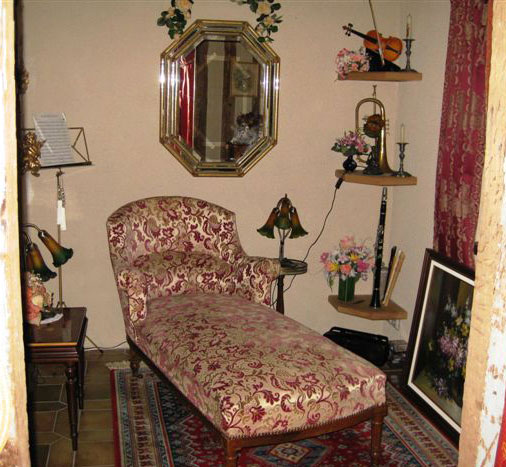 When we first saw the office, it was a sort of museum for musical instruments. There was also a daybed. Jean Michel thought of turning it into a small kitchen early on, when we turned the bottom floor of the house into a gîte, but I couldn’t see the point.

However, after we renovated the fireplace and started using it to cook côte de bœuf, it seemed it might be a good idea. One thing I was certain about though was that we’d block off the really low opening between the living room and the kitchen where I nearly killed myself the first year. We used a wrought-iron and glass console which doubles as a serving hatch. 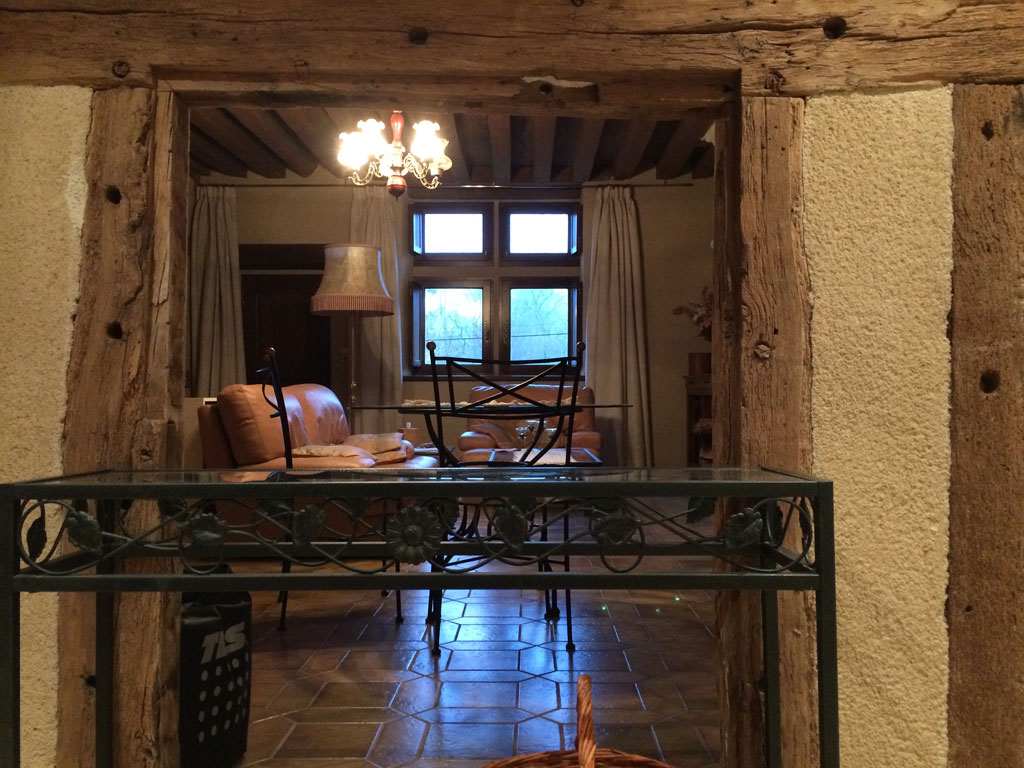 Then we used that neat Ikea on-line software to work out where to put all the kitchen appliances and cupboards. We finally fitted in a normal-sized fridge with a freezer, a dishwasher, a sink, a two-ring induction plate and a microwave with enough room on the table top for our espresso machine. 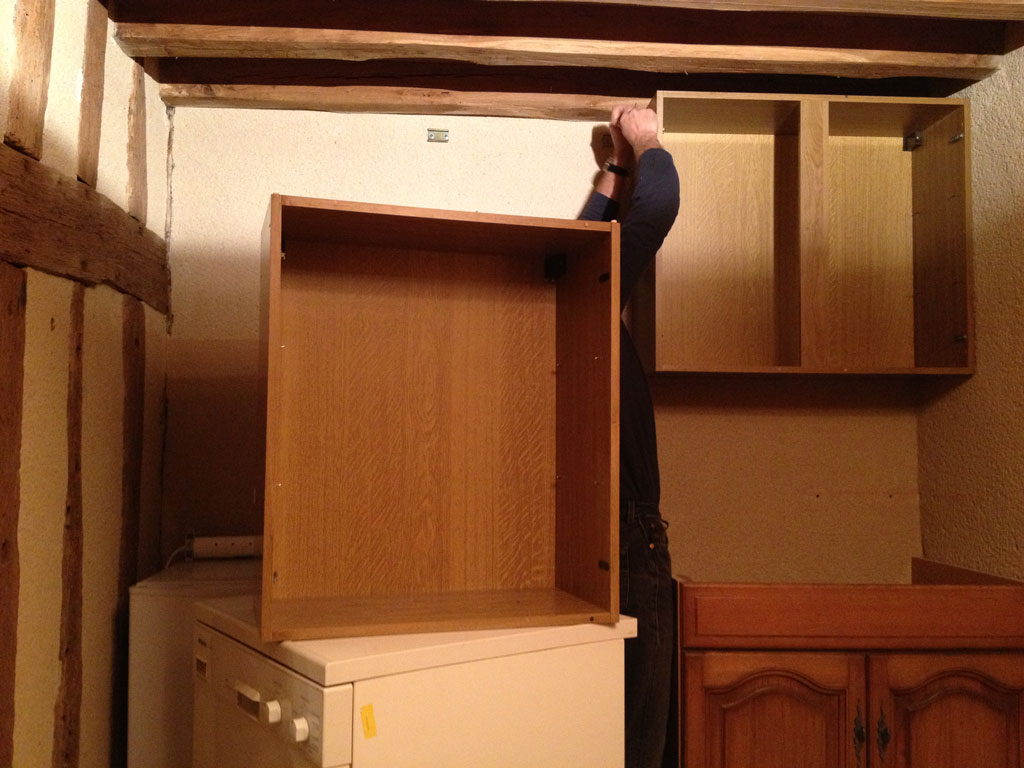 Jean Michel putting the cupboards up

We found some second-hand oak kitchen cupboards on Le Bon Coin to suit the style of our living room furniture because you can see them through the hatch. We picked them up miles away but it was difficult to find exactly what we wanted. I also spend quite a while removing decades of accumulated grease.

The induction plate also came from Le Bon Coin (never used) and we bought the sink from Leroy Merlin because the size meant it wasn’t standard and we didn’t want it to be chipped or anything. 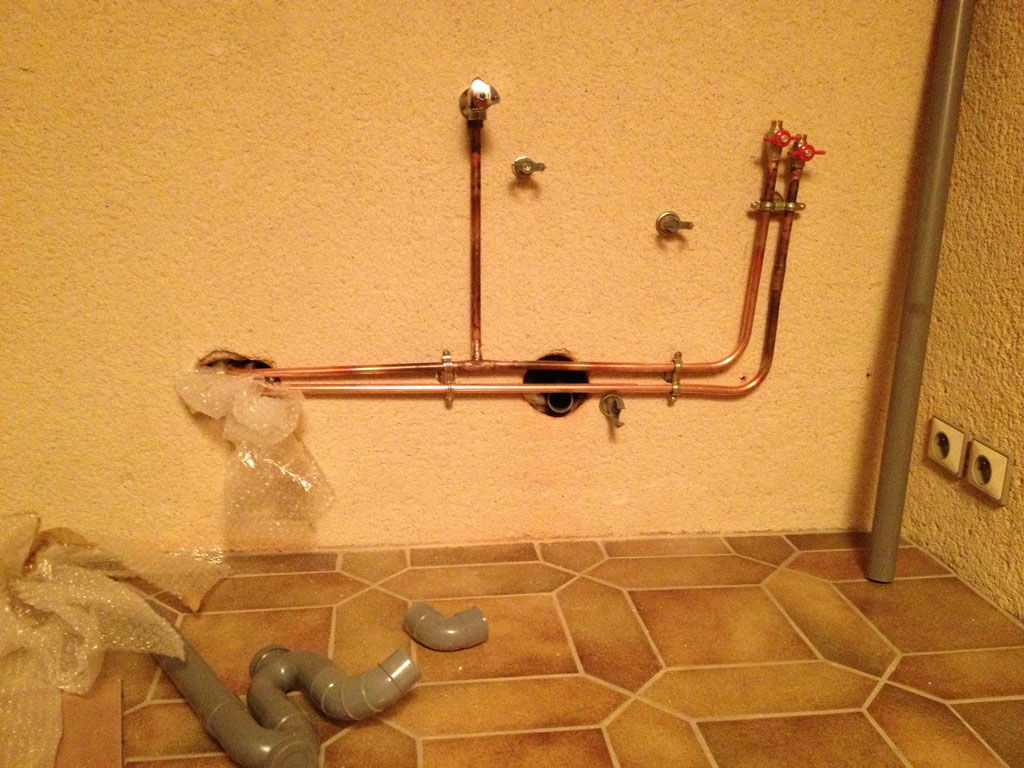 Jean Michel then started working on the plumbing, wiring and lighting. The plumbing was complicated, as usual, by the fact that the walls are 70 cm thick and the lighting by the visible beams. 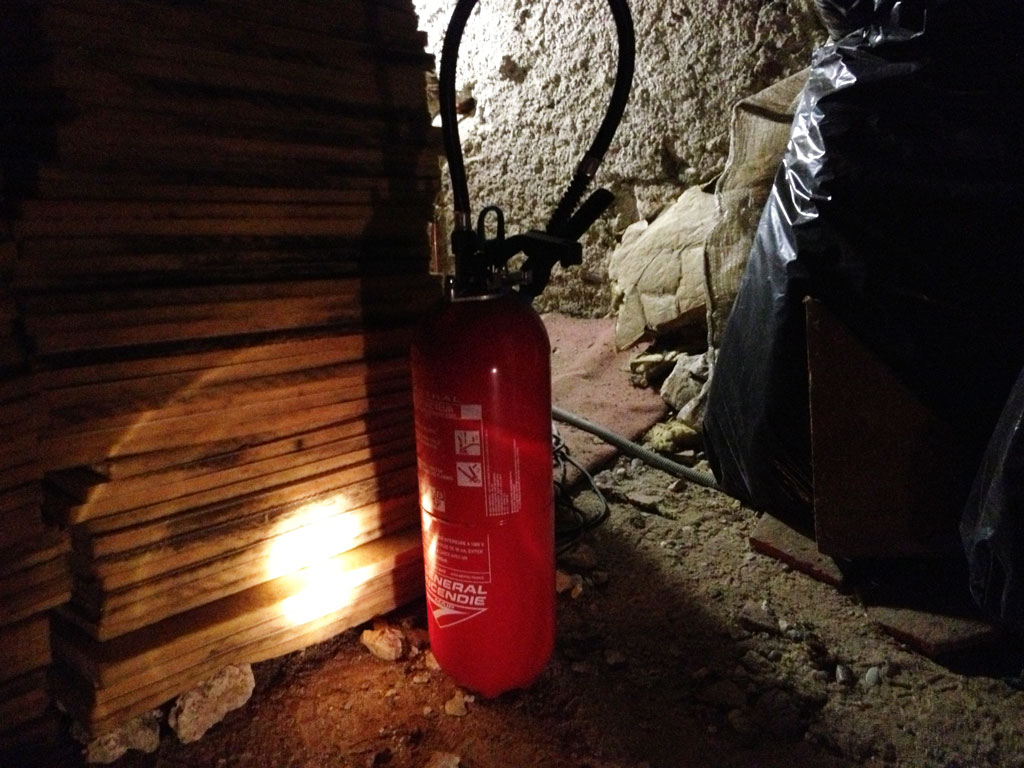 He spent quite a bit of time in the roof space doing the wiring for the little spotlights we finally decided upon. At one stage, I had to hold a torch and be ready with a fire extinguisher while he soldered the pipes in the attic on the other side of the kitchen. 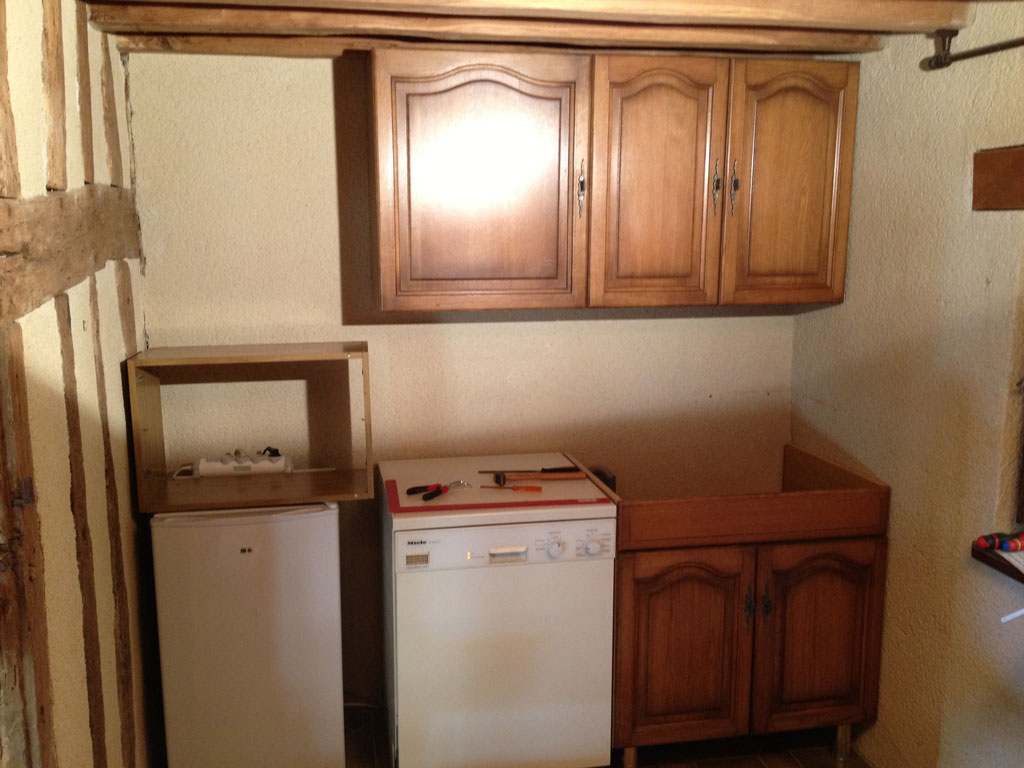 Little fridge and dishwasher in place

All this was done last winter while we still had the gîte and had the major advantage of providing us with a dishwasher. We used a small fridge we picked up at Troc de l’île while waiting for a larger one after we moved. But the final touches were still missing. 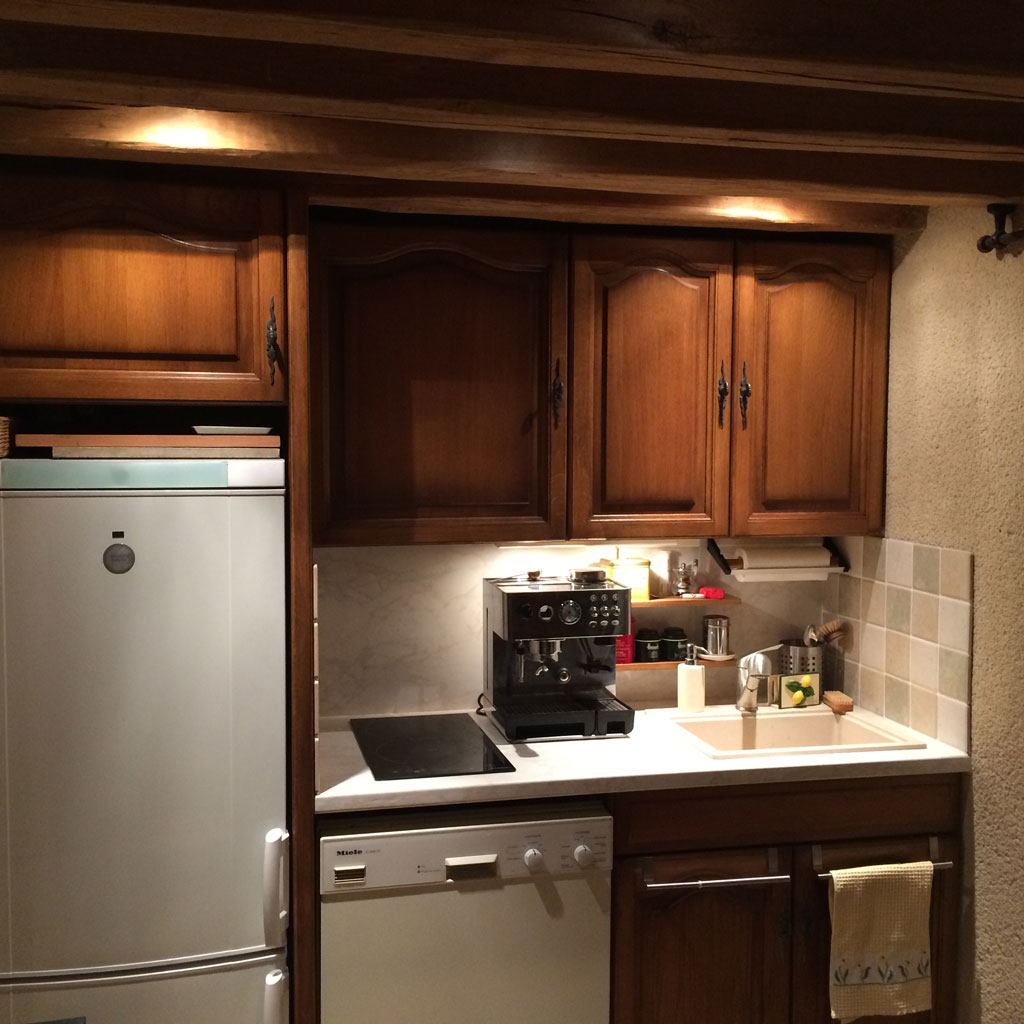 Yesterday, Jean Michel finished it completely. He combined two corner shelves to provide somewhere to put the jug and toaster and made a wine bottle stand to put in the recess which now also houses the bread board & bread, the water jug and teapot. 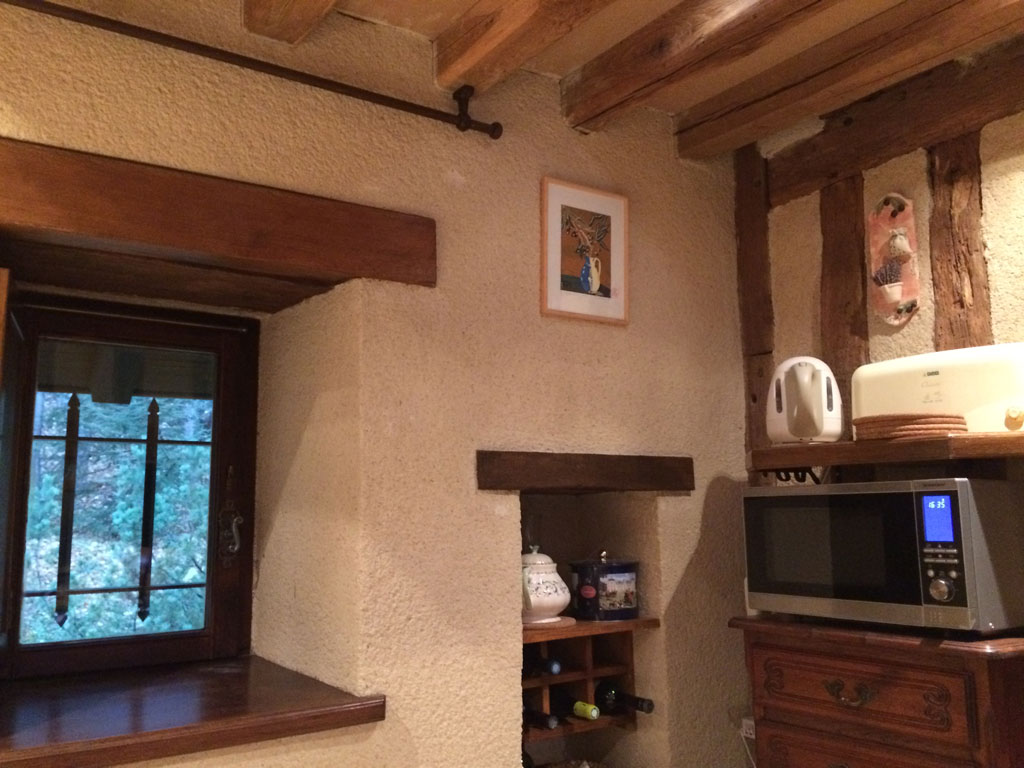 We have a chest of drawers for cutlery, utensils, tablecloths and teatowels and use the cupboard above the induction plate and sink for important things such as nibbles, tea and breakfast food. The glass-fronted bookcase in the living room takes the plates, cups and glasses. 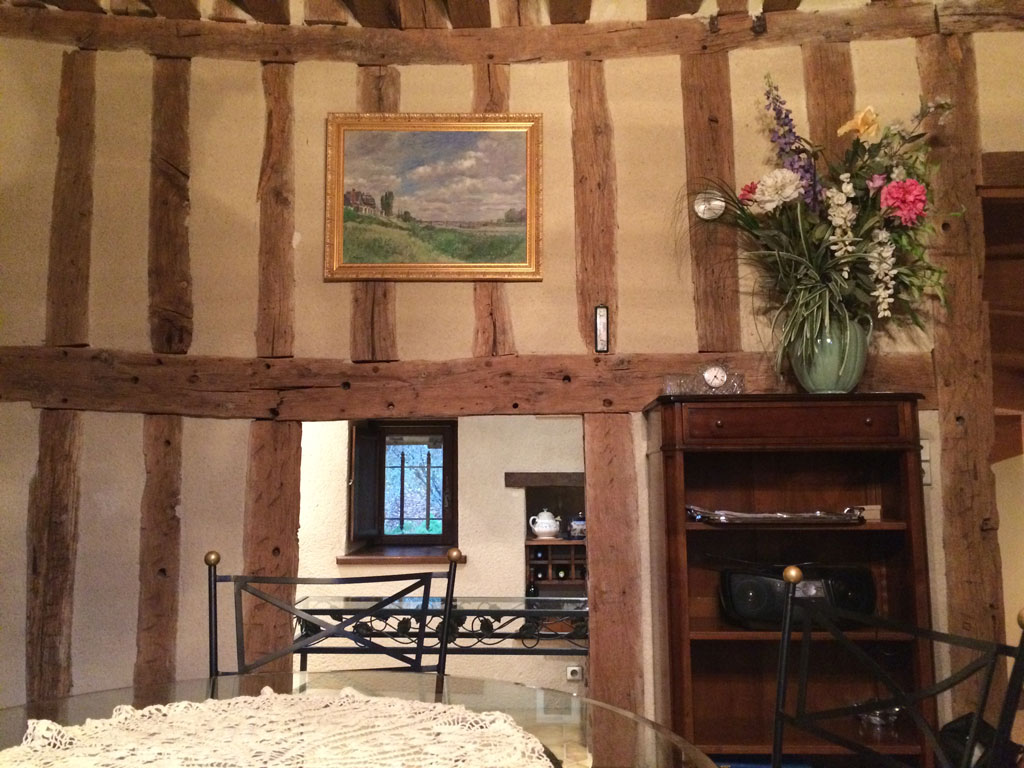 Looking from the living room into the office

So now we have the perfect place to prepare breakfast, apéritifs and coffee. We also have everything we need to have a barbecue in the fireplace.

Oh, and I nearly forgot. I framed and hung up the lithography that our very first home exchange guests from Australia brought us as a gift.

Who wants to join us?

7 Responses to Our New Office