Sun and Snow in the Albaicin in Granada

Posted on February 5, 2015 by Rosemary Kneipp

Snow has been predicted but when we wake up, there is no sign of it. We walk up Cuesta Alhacaba, our double hill road, to Casa Pasteles on Plaza Larga for breakfast. There’s a market today – one clothes stand and a fruit and vegetable stand!  We go for the tostado medio and have trouble understanding how much we have to pay : 7.70 euro, which somehow seems a very strange amount. 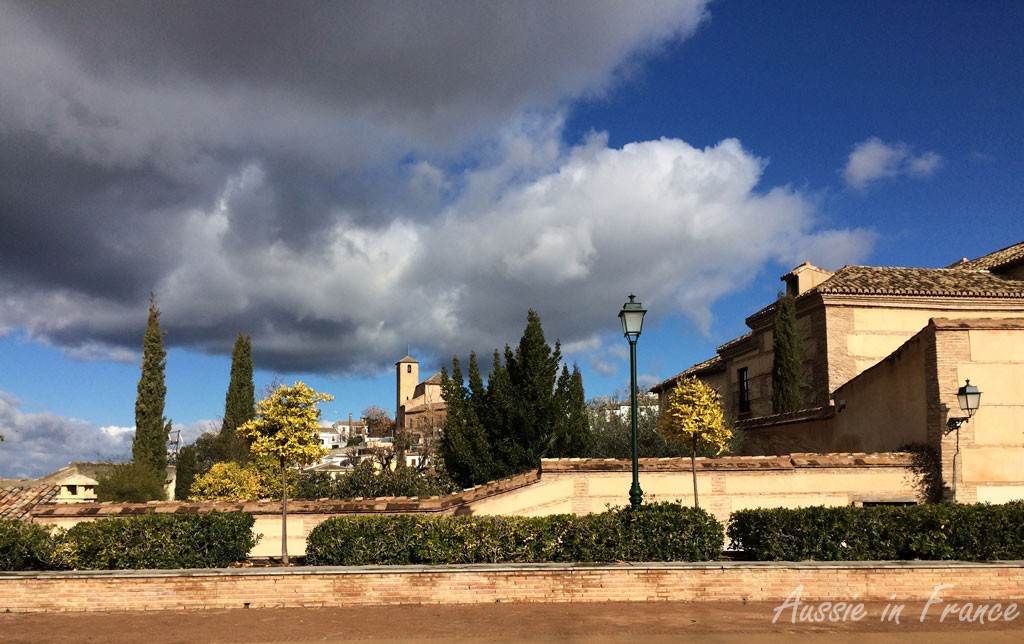 We walk down the other side of the Albaicin quarter through tiny winding streets, the sky dramatic with its bright sun, deep blue and menacing clouds. I’m starting to get the feel of Granada which has escaped me up until now. A word we keep seeing is Carmen, derived from the Arabic for a garden planted with vines. In Granada, it means a villa. I’d love to see behind the high iron gates. 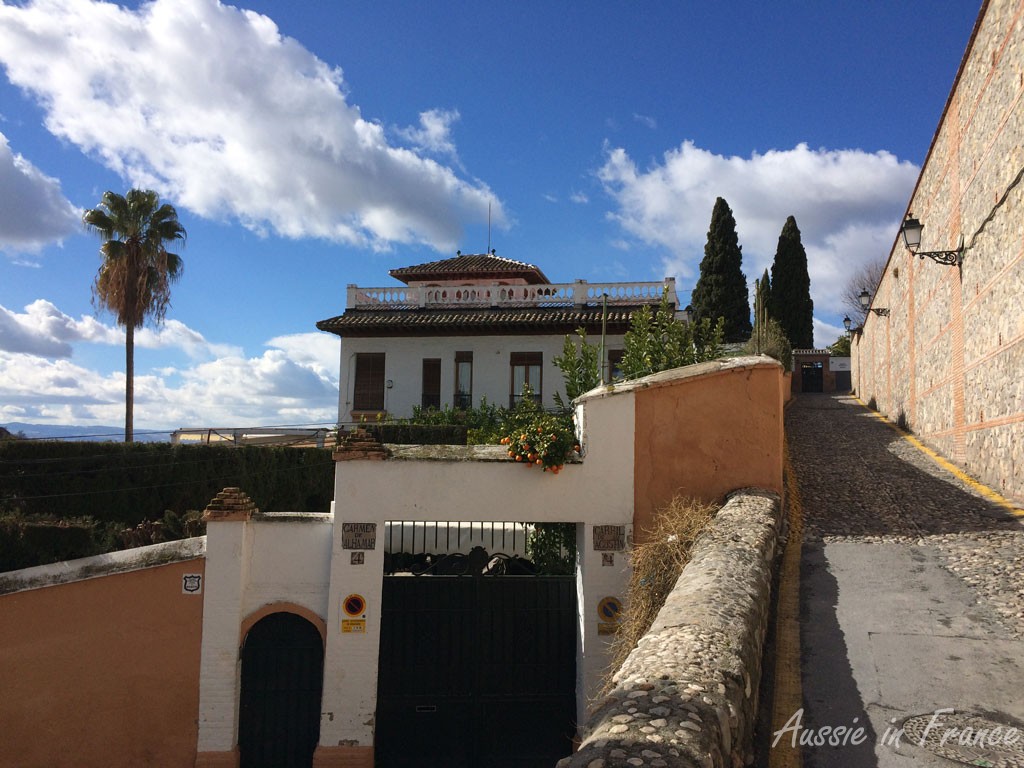 Our first destination is the 11th century Bañuelo, one of the oldest surviving and best-conserved baths in Andalucia and the oldest public building in Granada. It was not destroyed during the Christian era because it is underneath a private dwelling. We have the place to ourselves and are impressed by the sheer size of the baths although their tiles have long disappeared. 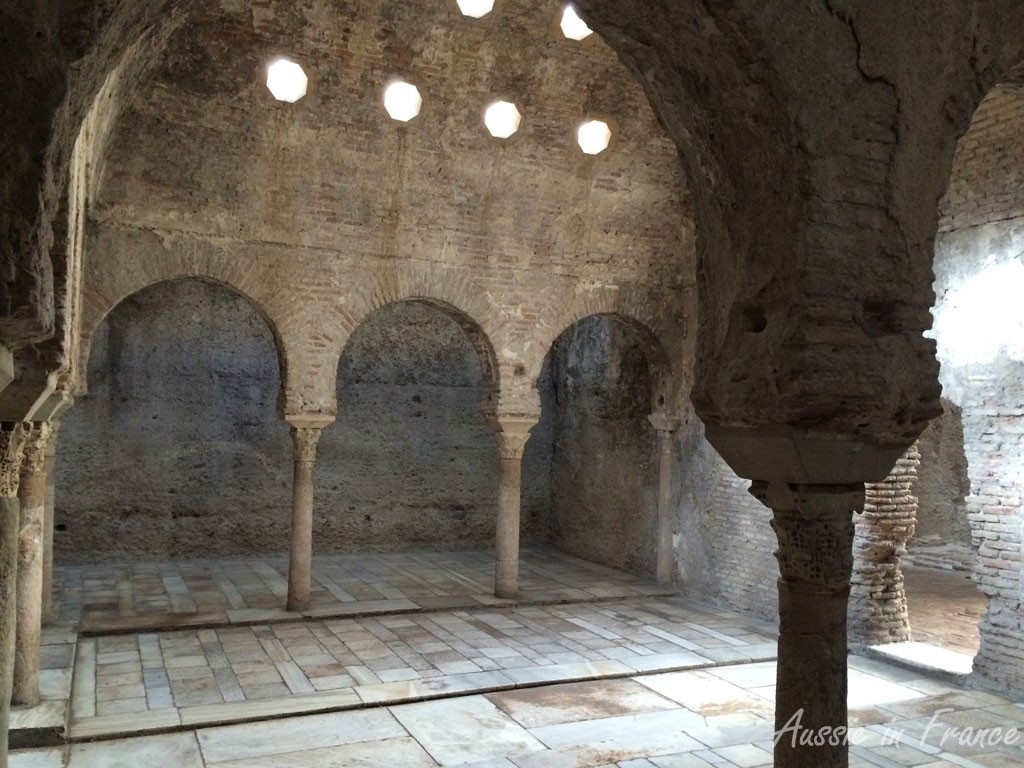 As we walk past Plaza Nueva, I connect it up with the touristy place at the bottom of the Alhambra from the day before. Granada seems to have no centre. Having coffee in the sun – at last!

After having our only outdoor coffee since the beginning of our stay in Granada, we visit the Royal Chapel and I’m astonished to see how terrible some of the wall paintings are although the faces of the sculptures on the ornate altar are finely carved.

We walk quickly through the modern souk in Alcaiceria, that replaced the original medina after it burnt down in 1843, and is now a craft market with lots of souvenir shops. We cross over Gran Via de Colon and start walking up the little streets to the Albaicin. 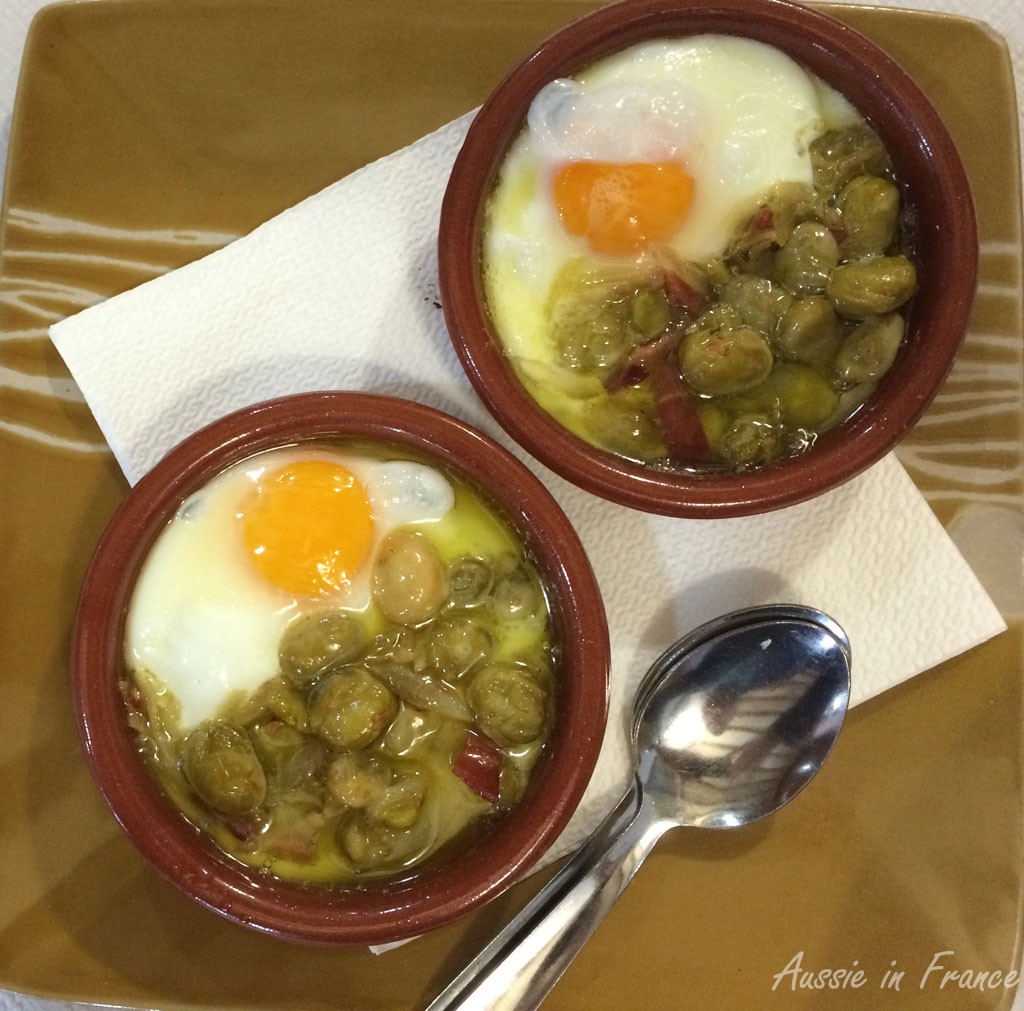 By the time we get to Plaza Aliatar, I’m more than ready for lunch – well, a rest in any case. We choose Bañeao with its 3-course menu at 9.50 euro and hope for the best. We are served a tapa consisting of a small fried egg surrounded by some sort of dried peas or beans, followed by what look like eggplant French fries, then grilled squid with salad. I have the somewhat liquid rice custard. People keep running outside to see the whispy little bits of snow that are falling. 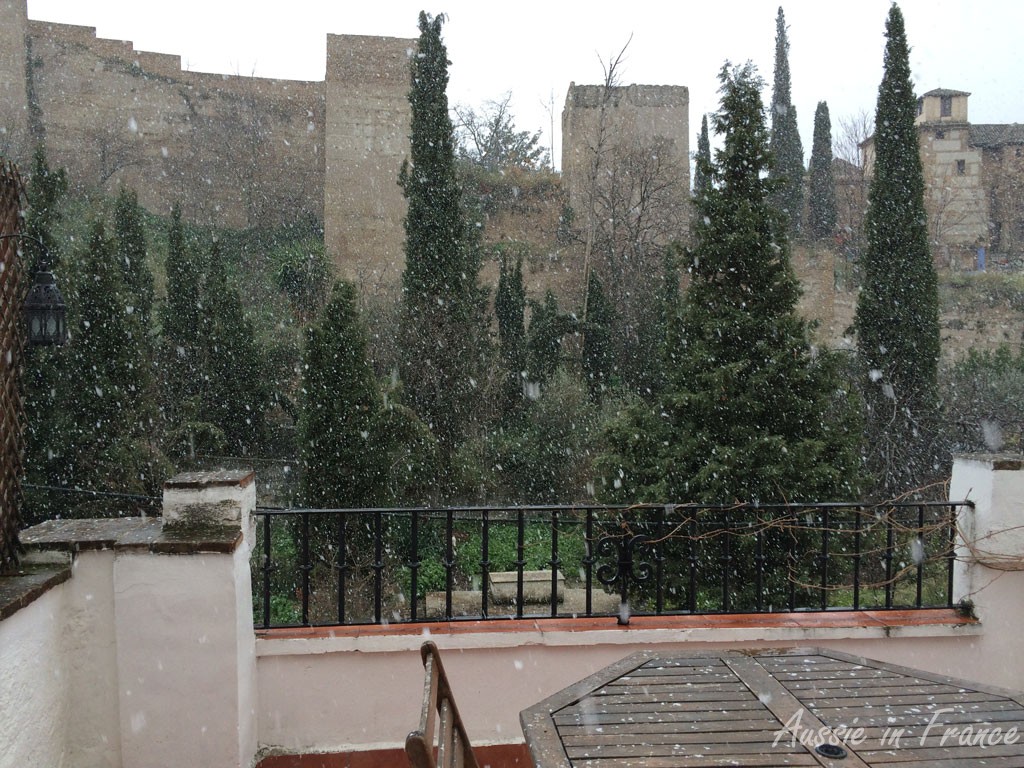 Snow falling on our terrace

It’s late afternoon and the snow has finally started, light at first, then gradually heavier. By the time we venture out to buy food for dinner, it’s snowing quite heavily and wetly. The paving stones are a little slippery as well. 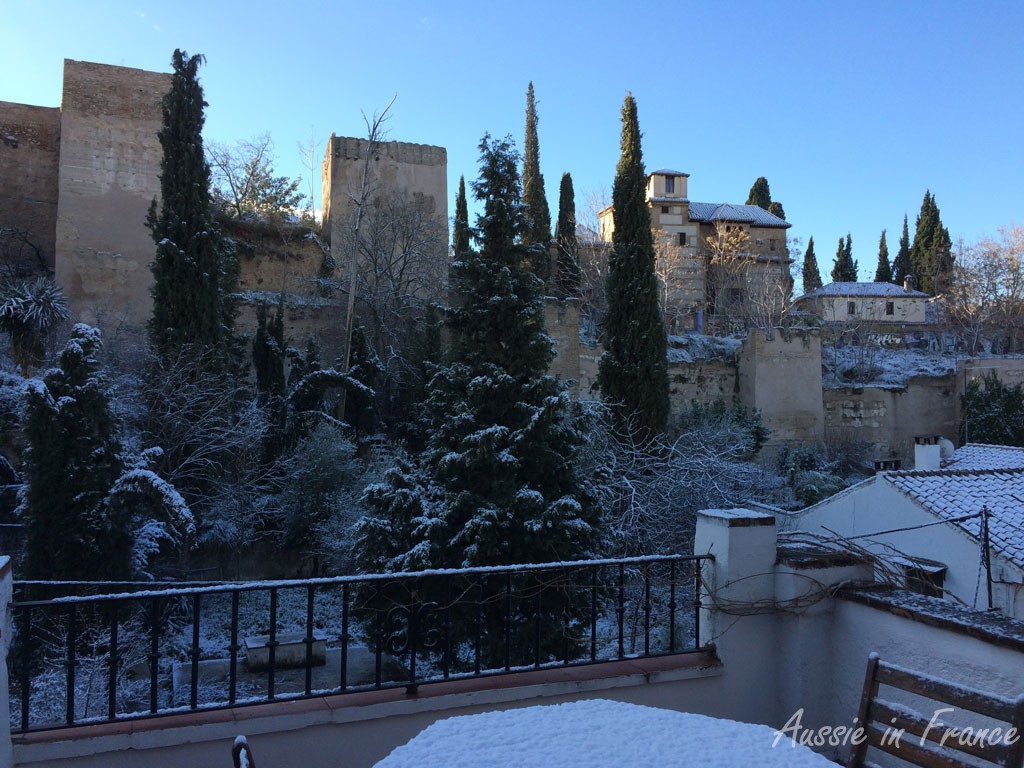 Snow on our terrace next morning

When we look out the window next morning, we see there is still snow on the ground, especially on our terrace, but the sky is bright blue so we head over to our favourite Mirador San Nicolas. 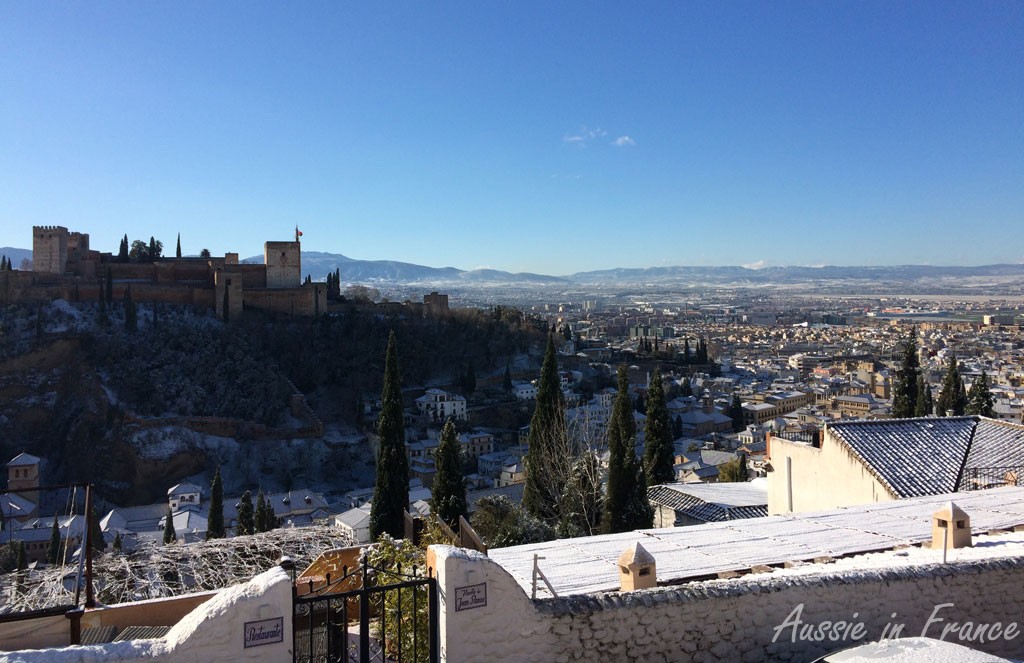 The Alhambra after snow

It hasn’t snowed enough to turn the Alhambra white but the glinting rooftops and snow-covered orange trees are lovely. It’s biting cold though. 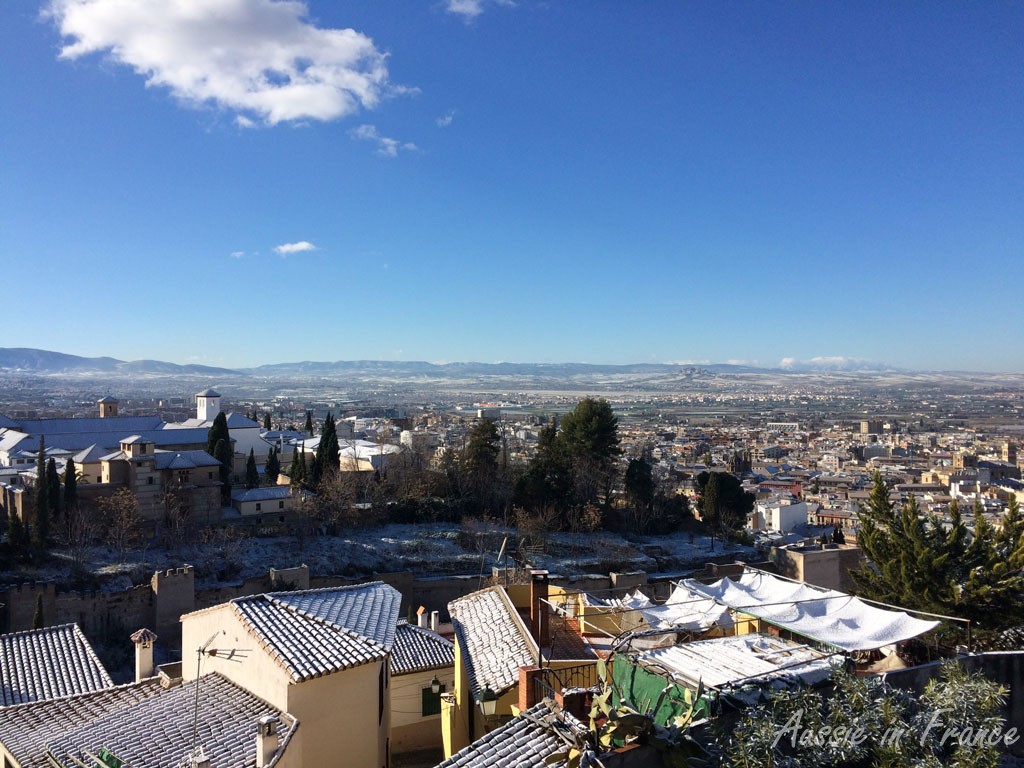 We make our way down the hill towards the university quarter where we’re going to visit the Carthusian Monastery and are delighted by the views of the city spread out before us. 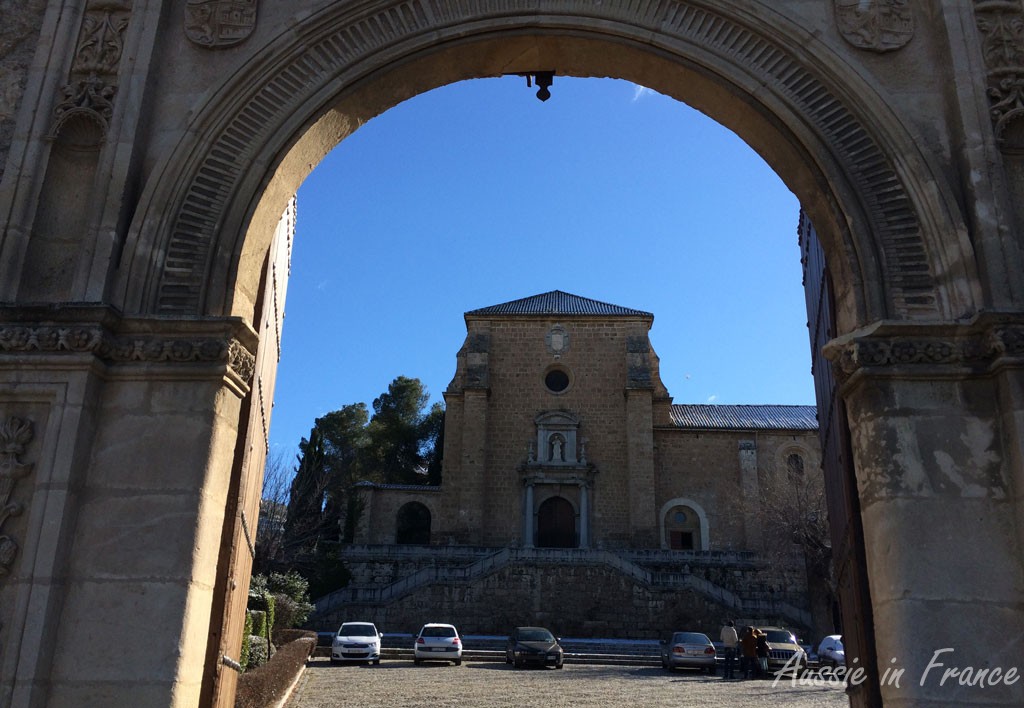 From the outside, the Cartuja reminds me of the Cartosa near Milan, one of the most beautiful churches I’ve ever seen. The inside is very ornate with multi-coloured marble and polychrome wood drapery. Unfortunately photos are not allowed. 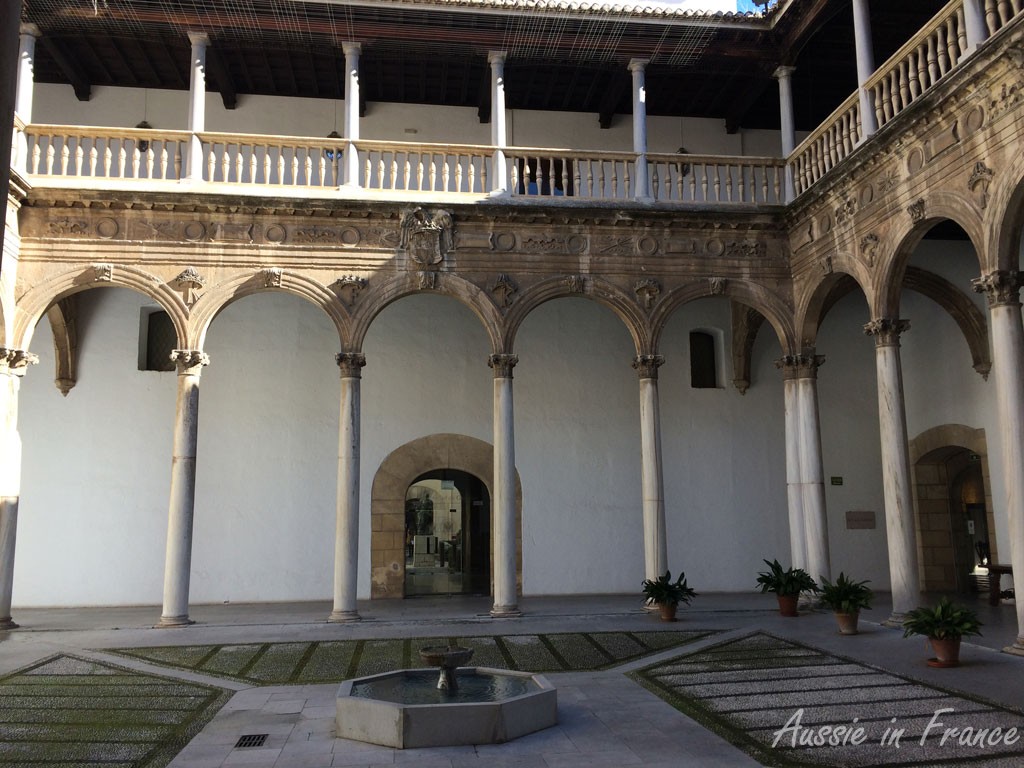 On the way back, we discover a new area we haven’t been to before and visit the former royal hospital, now the University of Granada. It consists of a series of beautiful white patios but no students. Maybe it’s holiday time. 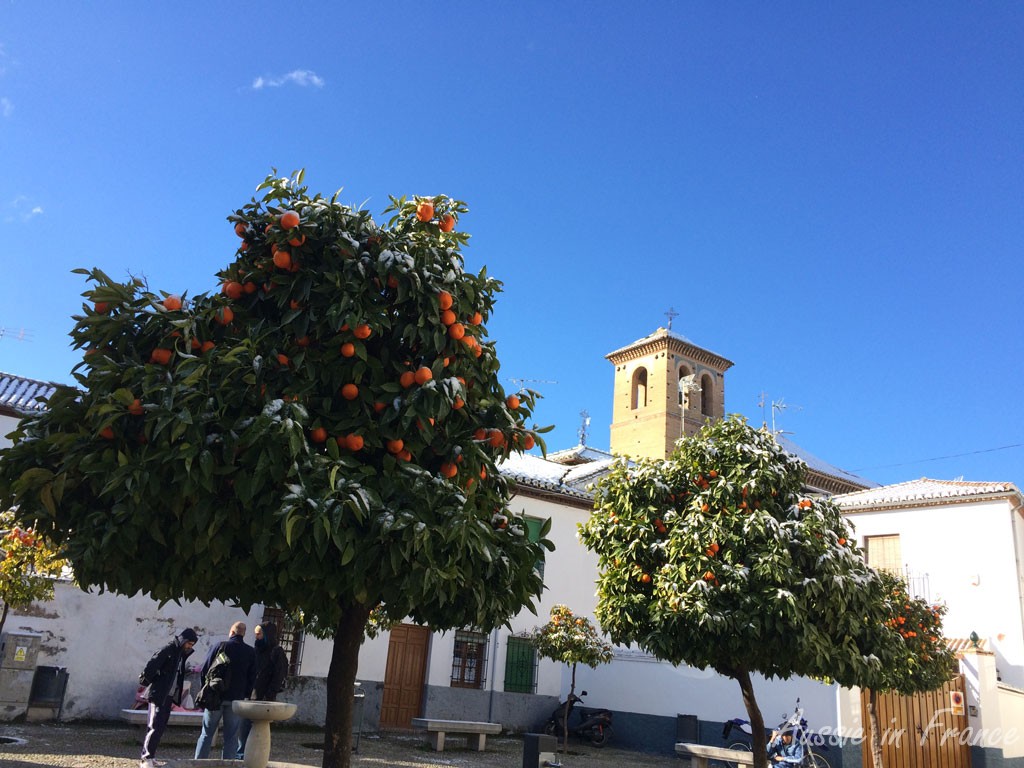 Snow on the orange trees

We debate whether or not to eat downtown or up in the Albaicin and decide on the latter. As before, the views from the tiny winding streets are stunning but exhausting and it’s still very cold with little pockets of snow on the ground in some places. 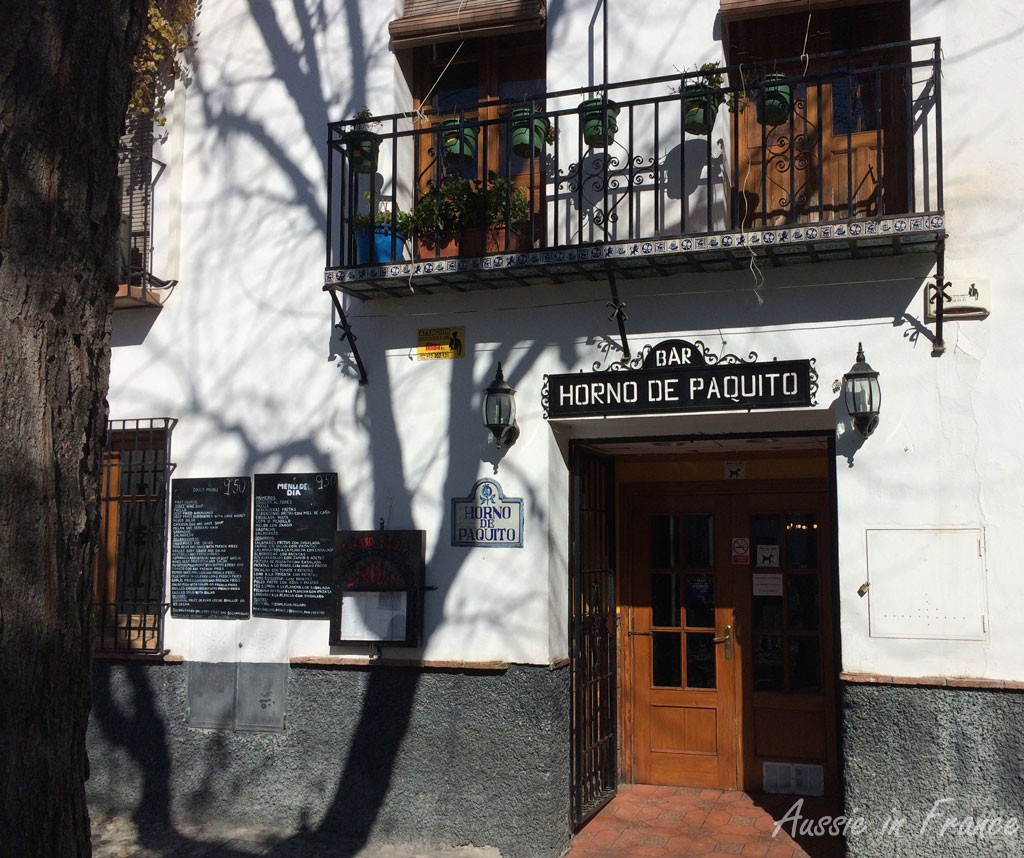 We end up again on Plaza Aliatar and try the other restaurant, Horno de Paquito (horno = oven) which ostensibly has the same menu but turns out to have a lot more deep-fried dishes. We order a vino tinto followed by a vino roja, although we’re not sure what the difference is! 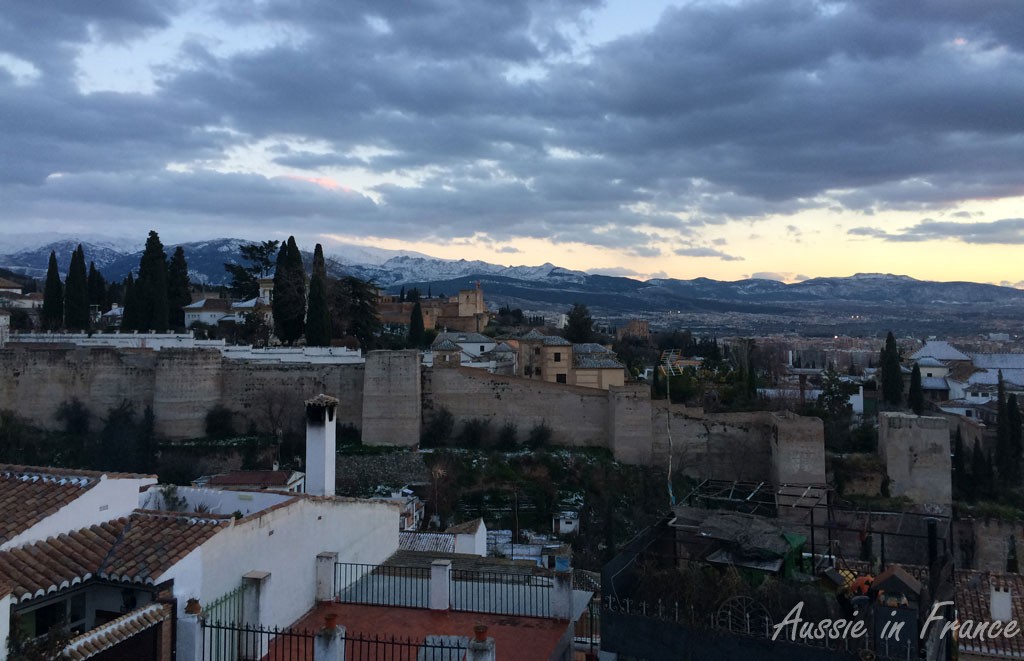 Sunset over our wall

After our well-earned siesta, we suddenly look outside and see there’s a magnificent sunset. We quickly get dressed, but by the time we are rugged up and ready to leave, the sunset’s nearly over. I nearly burst my chest getting up another of those hills but we are five minutes late. Maybe we’ll do better tomorrow.

This entry was posted in Architecture, Art, Food, Restaurants, Sightseeing, Spain and tagged granada in the snow, visiting granada. Bookmark the permalink.

11 Responses to Sun and Snow in the Albaicin in Granada