I somehow feel that Granada escaped me. I think there are two reasons: the fact that I was still recovering from a bad bout of flu and the unexpectedly cold weather. It seems to me that Spain is an outdoor country and that is the only real way to enjoy it. With temperatures around freezing, it was difficult to find enough to do outside and the indoor venues were practically never heated. 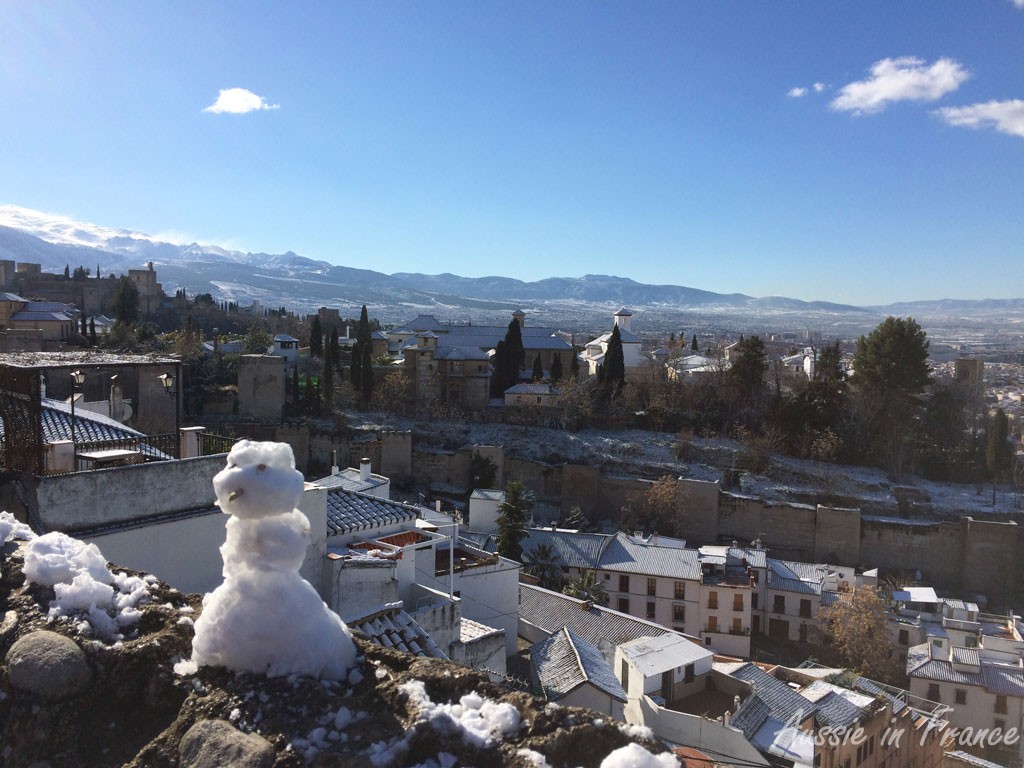 We did not expect to see a snowman in Granada!

When to go – not winter!

So my first suggestion would be to avoid January and February, despite the oranges on the trees and the possibility of snow.

How to get there

I also think we were there too long, but surprisingly, the cheapest flights were Saturday to Saturday! There are no direct flights to Granada (you need to change in Madrid), so the cheapest way to go is via Malaga which has flights arriving from all over the world.

You can then either stay overnight in Malaga or take a bus directly to Granada. Because we were arriving at night, we pre-booked our transport from the airport to our hotel in the centre via airportshuttles.com. It wasn’t that much more expensive than public transport and much cheaper than a taxi. Our friendly driver was waiting for us and we arrived at our hotel in next to no time.

Bus from Malaga to Granada

We didn’t stay long in Malaga as there is nothing to see but new buildings. I seriously don’t see the attraction but Black Cat was there during fiesta time one year with local friends and loved it. 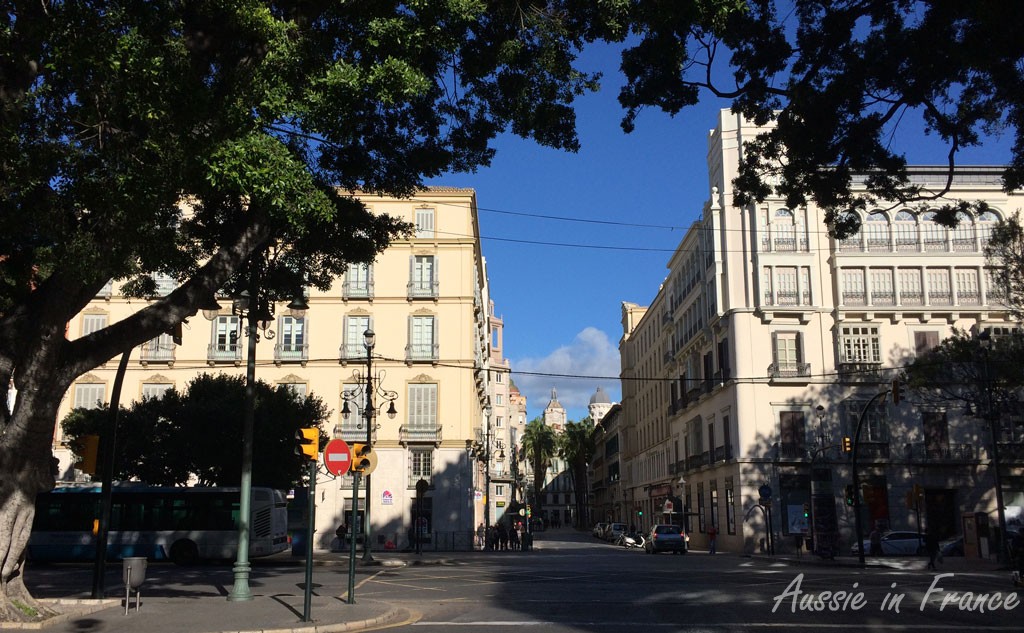 The bus station is within easy walking distance of the centre of Malaga. There are machines to buy your ticket (in English) and you get to choose your seat.  The buses are modern and efficient and leave on time. We even had a bag of goodies on the ride back from Granada to the airport!

However, the bus station in Granada is very far from the centre so it’s better to take a taxi (less than 10 euro) to your accommodation. We literally walked outside and jumped in a cab. On another occasion, however, we walked there and bused back and it was long and complicated. 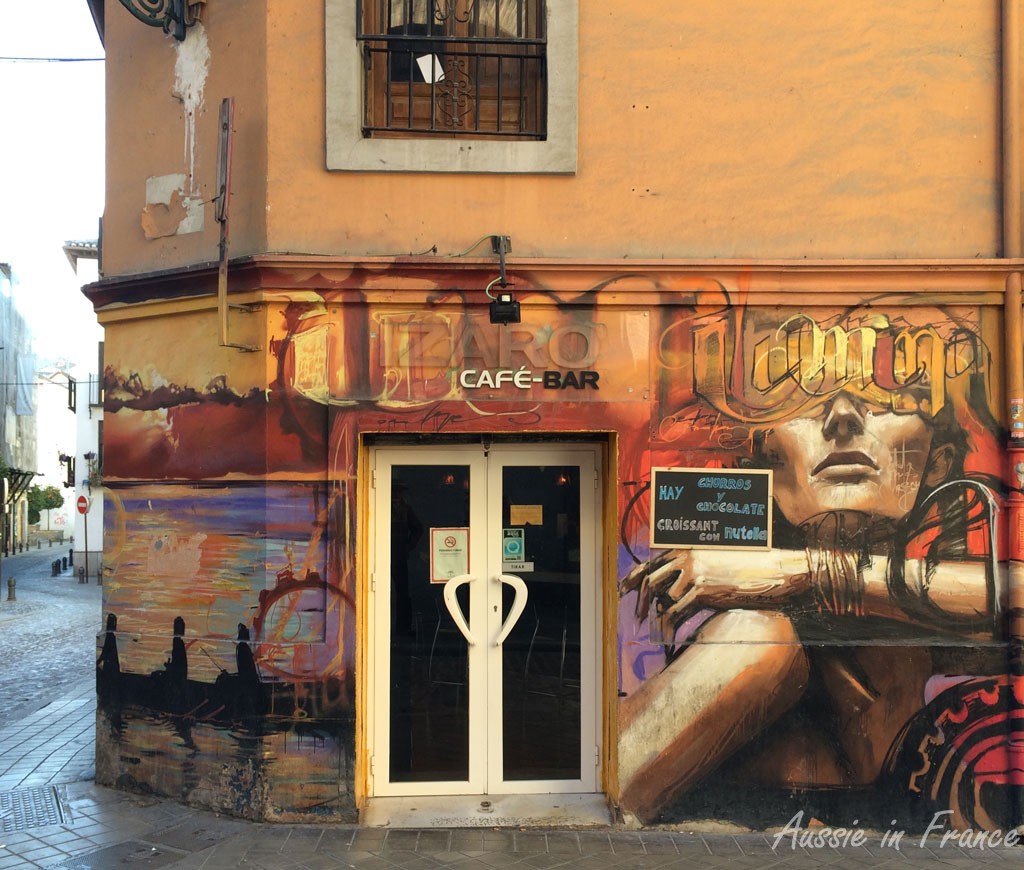 A café at the bottom of our hill with great tostadas

How long to stay – and make a side trip to Cordoba

I think that 3 or 4 nights is a maximum to spend in Granada. I regret that we did not get our act together in time to rent a car (50 euro for 24 hours), drive the 2 ½ hours to Cordoba, visit the famous mosque, stay the night, visit the rest of the town the next morning  then drive the 2 ¾ hours directly to Malaga airport.

When we visit another country, we prefer to eat in fairly basic local restaurants rather than go for an often disappointing gourmet experience. Spain is known for its tapas. Sometimes, they are served free with drinks in the evening and other times you pay a small amount (1.60 to 2 euros a time) per serve. Some are very filling. Larger serves that you can share are called raciones. 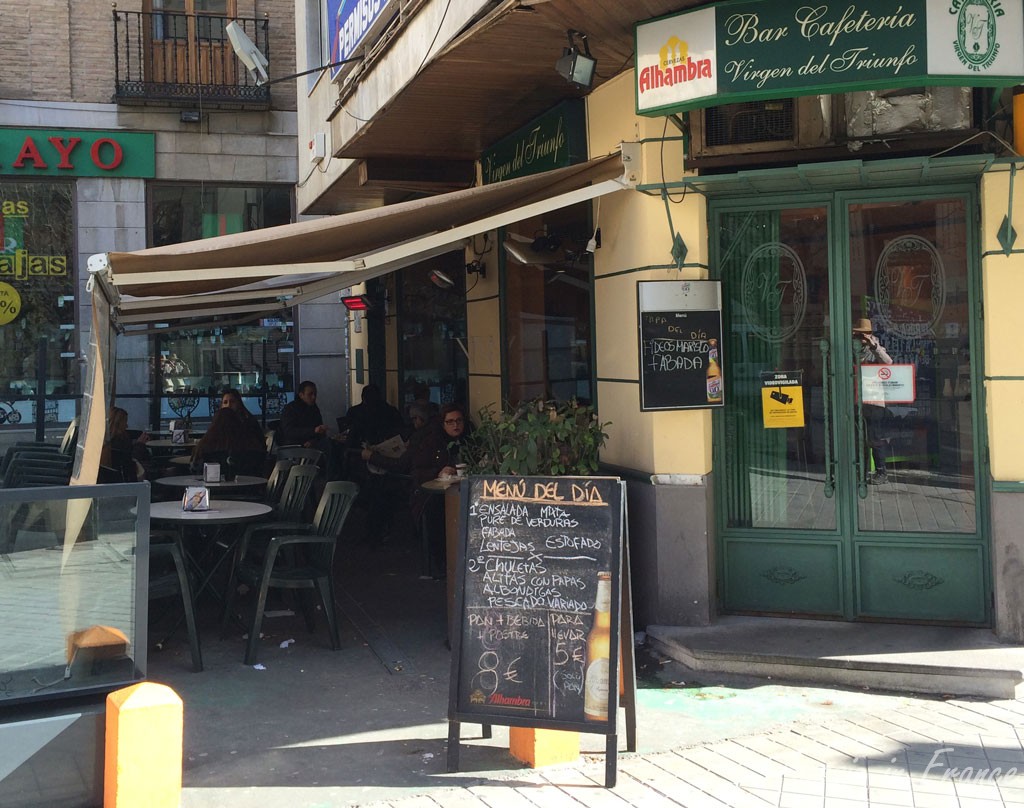 We found the menu del dia (menu of the day) at 8 to 9.50 euros excellent value for money. It includes a starter, main course, dessert, bread and a glass of wine. There is sometimes a tapa as well. There isn’t a very wide choice but the food is often prepared on the premises and copious.

Eating hours are very different from France. Breakfast seems to take place at about 10 am, with people having a break from the office. Tea or coffee, freshly-squeezed orange juice and a tostada (toasted bread) spread with tomato pulp and olive oil, butter or just olive oil are always offered. On the last day, we went to a very small café and watched the lady put some tomatoes into a blender to make the pulp. Delicioius! It seems you can grate the tomatoes as well. The total price for this type of breakfast is about 3.50 to 4 euros per person. 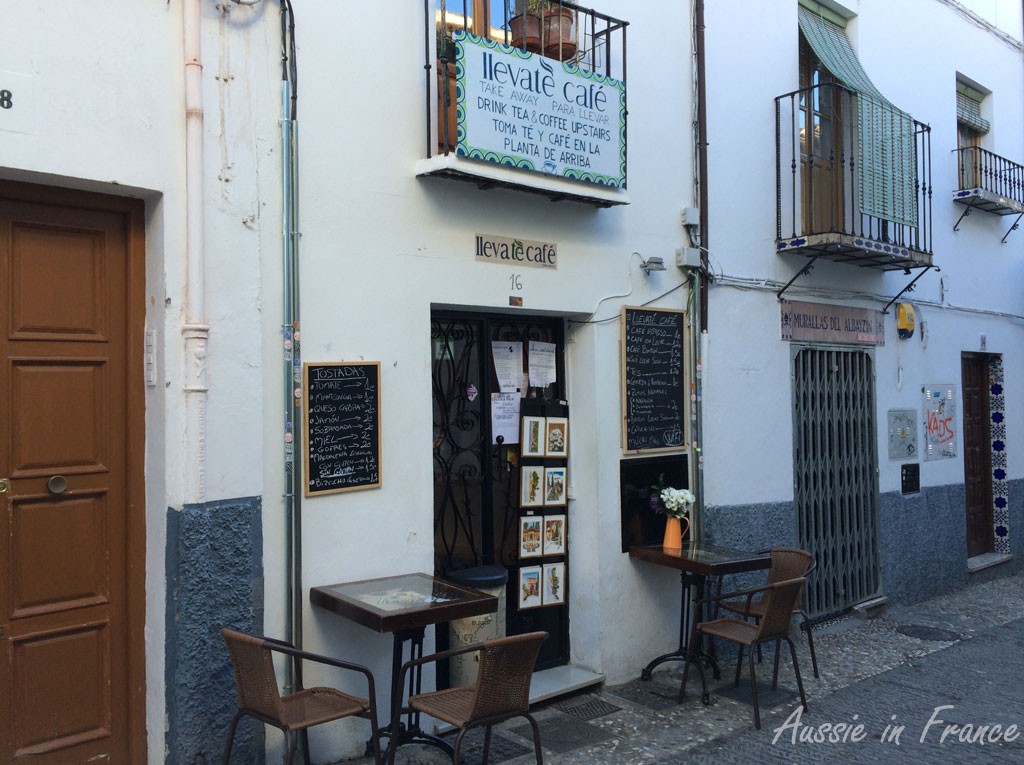 The wonderful breakfast café at Plaza Larga in the Albaicin we found on the last day!

Churros are another speciality of Spain. We loved them in Madrid but found that even in the most popular churro place in Granada (Futbol Café), they were salty and too chewy. You dip them in hot chocolate that is made with some kind of thickening. I don’t really think they are worth the calories to be honest! 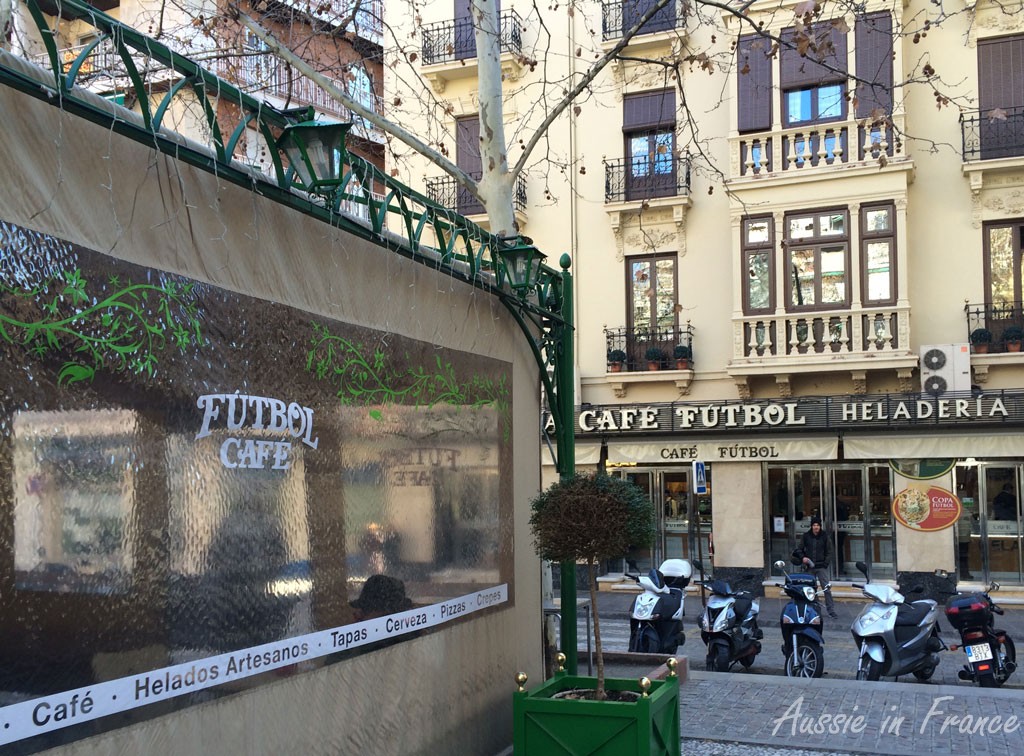 With regard to accommodation, we chose a self-catering flat as that is what we prefer if we go somewhere for more than a few days. I’m still not sure about the location. We were halfway up Cuesta Alhacaba in the Albaicin, which is the oldest neighbourhood of Granada and definitely the most interesting. If we went down the (very steep) hill, we were in the main modern part of the town and if we went up the (slightly less steep) hill and wandered around the other side, we were in the older part.  The two best vantage points, Mirador Nicolas and Mirador San Cristobal, are at the top of the Albaicin. However, at least in winter, there isn’t much open there at night. 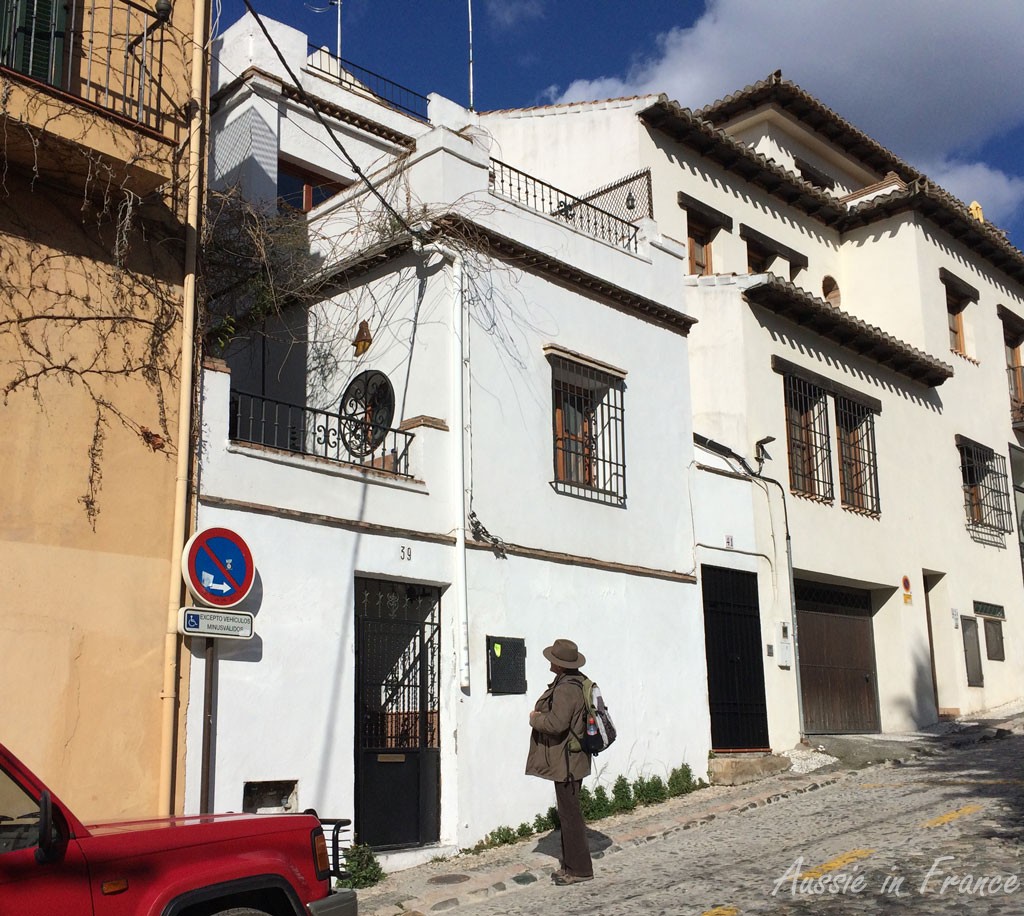 Our self-catering flat from the outside, halfway up Cuesta Alhacaba

The Alhambra, of course, is the star attraction, but it’s up on a hill and isn’t really close to anything else. A view of the Alhambra is much sought after apparently, but you can drink in the view from a lot of places in the city. To book ahead, you can use the official website and pick up your tickets in a ServiCaixa machine with your credit card. 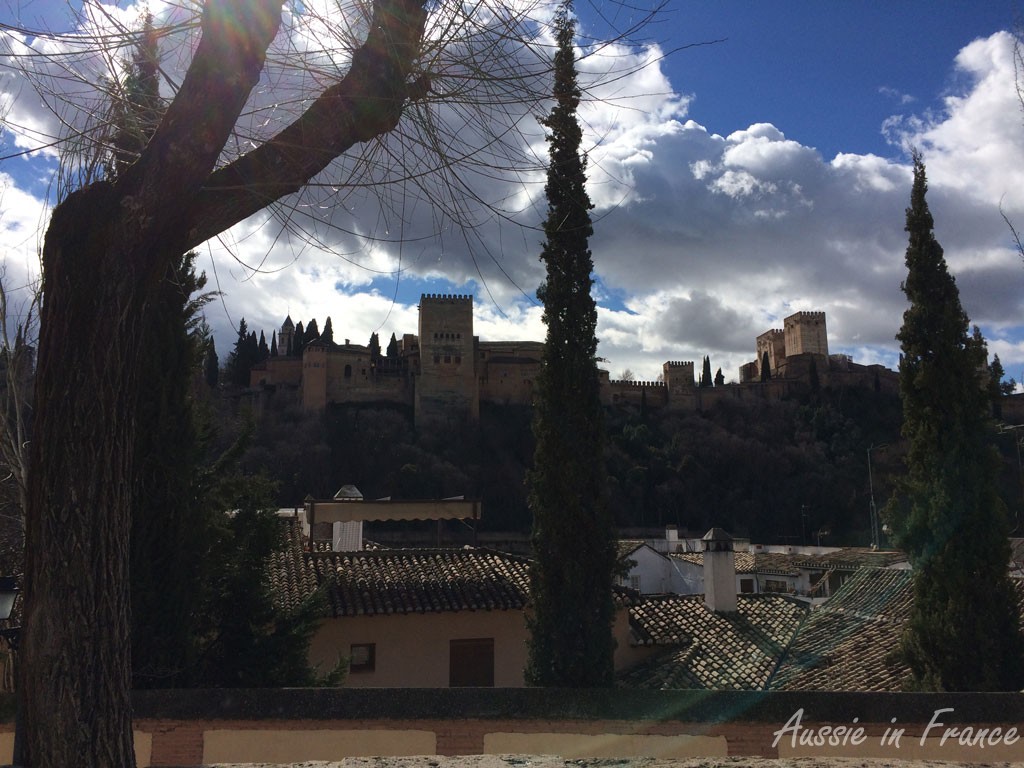 My perference still goes to Seville which we visited at about the same time several years ago and loved and Barcelona which we really enjoyed as well, especially anything to do with Gaudi. We also enjoyed San Sebastian, despite the weather!

13 Responses to Granada – Final Impressions and Suggestions – and maybe Cordoba