Sunny Spain and the Alhambra

Posted on February 3, 2015 by Rosemary Kneipp

We’ve booked our tickets for the Alhambra ahead of time on ticketmaster.es and collected them in a Servi Caixa terminal to avoid the queues. We know this from Barcelona. This is a great idea when there are lots of tourists but unfortunately it means you can’t choose the weather. Today it’s overcast and sometimes drizzly although we have a fleeting patch of blue sky mid-morning. The next sun is predicted for Thursday. 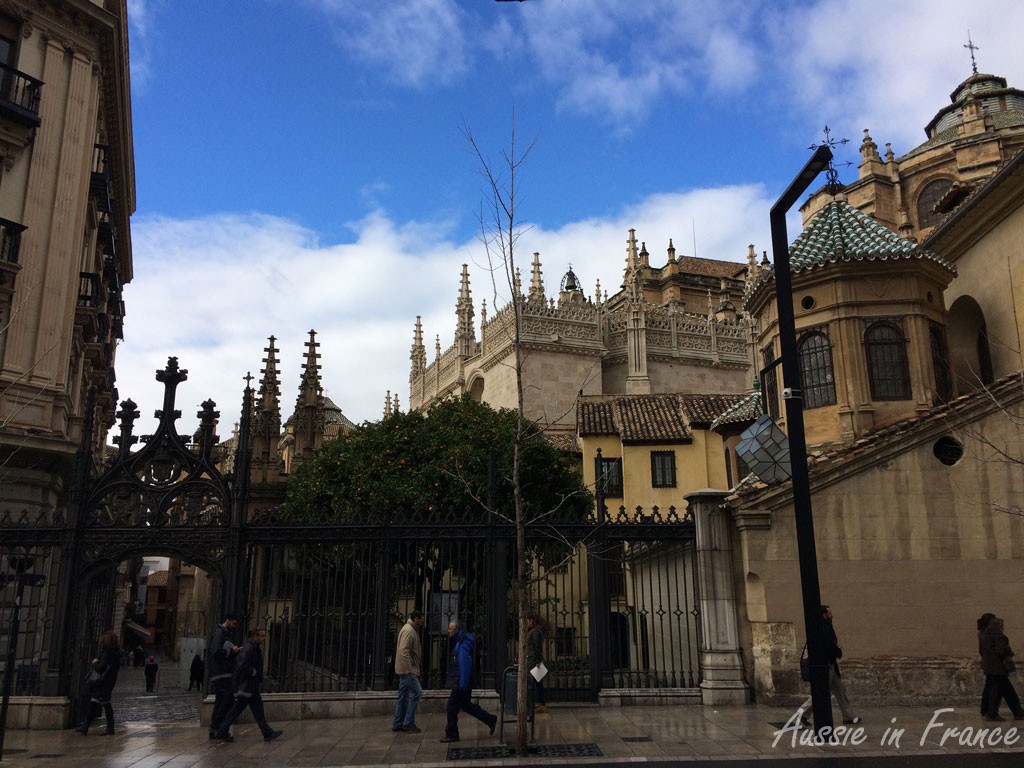 Fleeting blue sky on Gran Via

At about ten, after eating a boiled egg and a yoghurt at home, we walk down our double hill and left onto Gran Via de Colon, the main street of Granada. The first place we choose for coffee doesn’t have any tables left. This is a common occurrence during peak breakfast hour in Granada. Fortunately there is another place across the road with lots of tables. 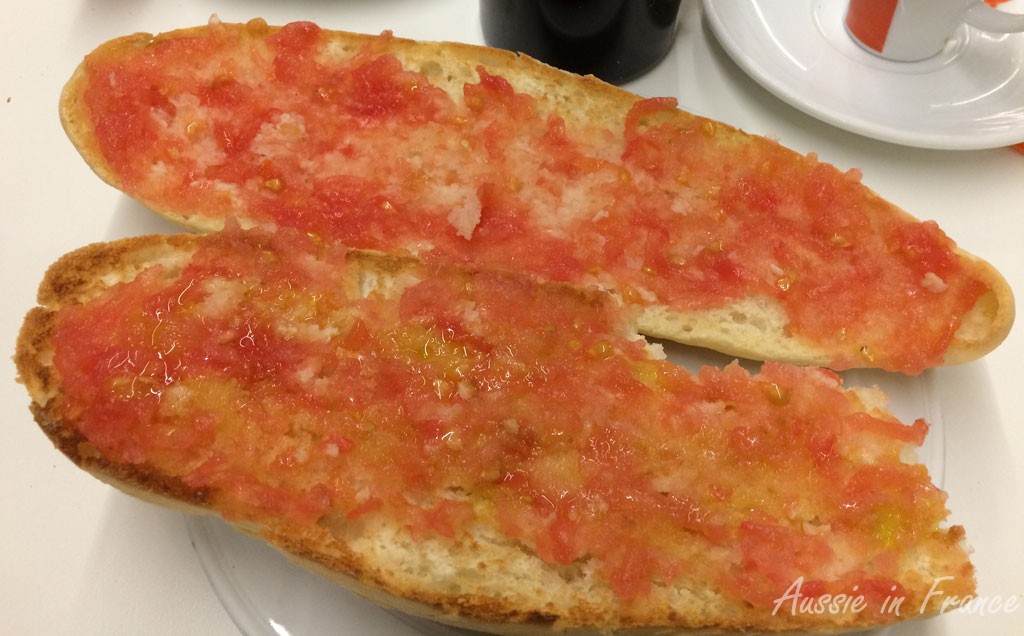 We order our espresso and freshly squeezed orange juice, then tostados and tomate which are even bigger than yesterday. We pour over olive oil as we’ve seen the other other patrons do. Jean Michel finishes off my second one. It’s costs us a whopping 3.50 euro each. 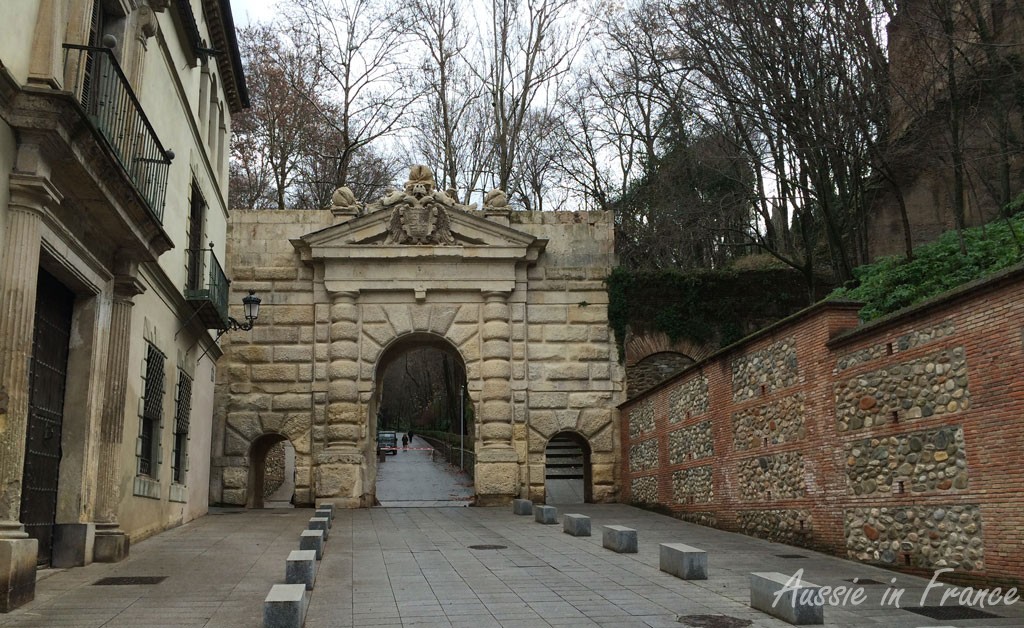 The gate at the bottom of the Alhambra

Then we set off for the Alhambra which is on top of another hill. This world heritage site consists of a palace and fortress mainly rebuilt in the 11th century by a Moorish emir called Mohammed ben Al-Ahmar and converted into a royal palace in 1333 by Yusuf I, Sultan of Granada. After falling into disrepair it was rediscovered in the 19th century by European scholars and travellers. 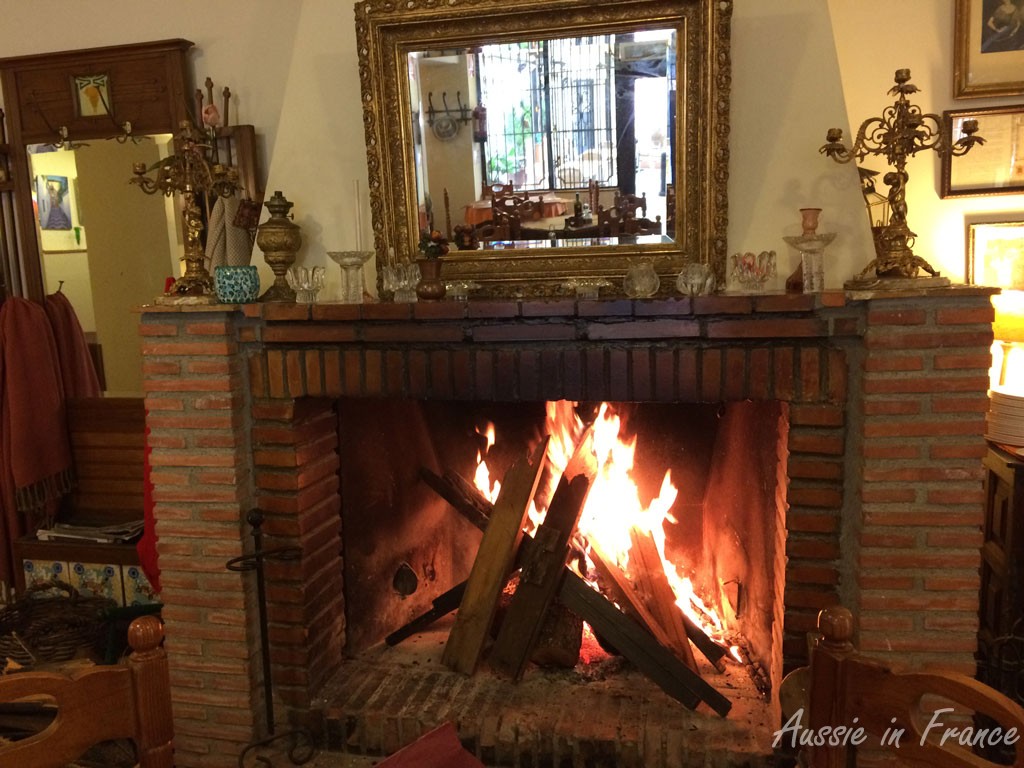 By the time we get to the top of the steep hill at 11.30 and discover we’re at the wrong entrance for our tickets I need a very long rest as I am still tired from my flu. We find a restaurant where we can just have coffee because even by French standards it’s way too early for lunch and we can’t get into the Nasrid Palace until 2 pm.  There is a welcome fire blazing in a brick fireplace. So much for sunny Spain!

I slowly recuperate while Jean Michel reads the guide book and we eventually ask for the menu. I order an eggplant salad and Jean Michel a Caesar salad and we both have our customary dry white wine (though I did have a red with my baby lamb cutlets yesterday which also went will with Jean Michel’s ox tail). 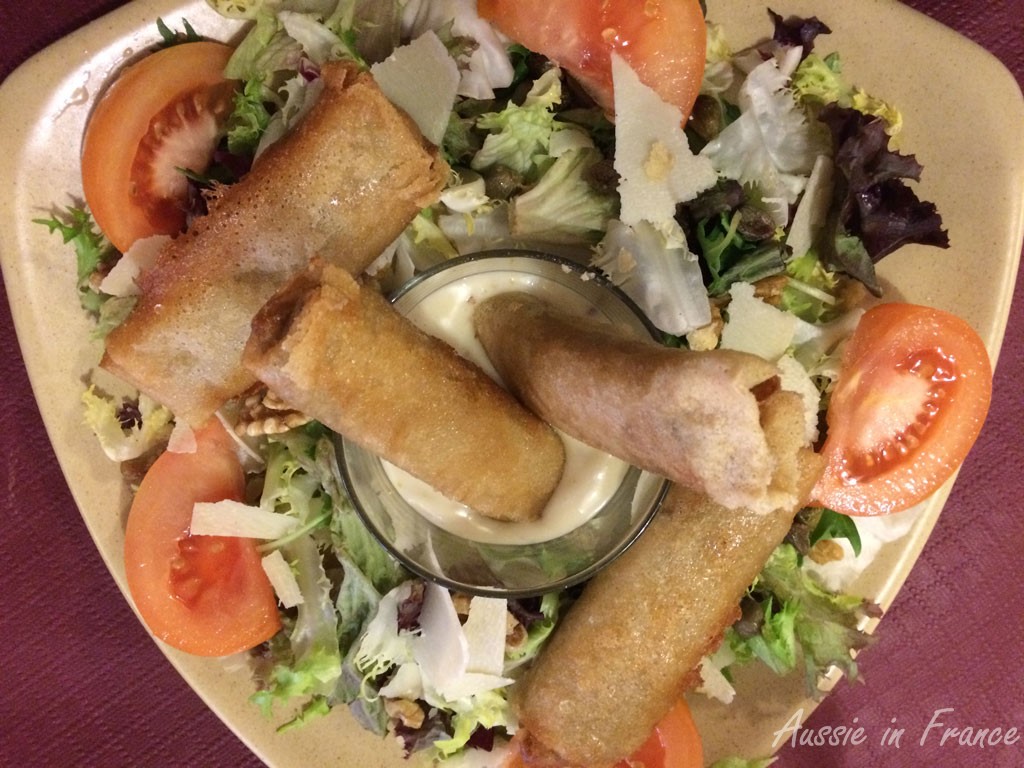 I’ll just make a slight digression here about the ox-tail which is a typical Andalusian dish during bull-fight season which obviously results in large amounts of bull’s meat.

The eggplant salad turns out to be slices of eggplant cooked in filo pastry – it’s very hard to get away from deep fried food here – on a bed of lettuce, hard tomatoes and capers with a sprinkling of parmesanand a large amount of mayonnaise. 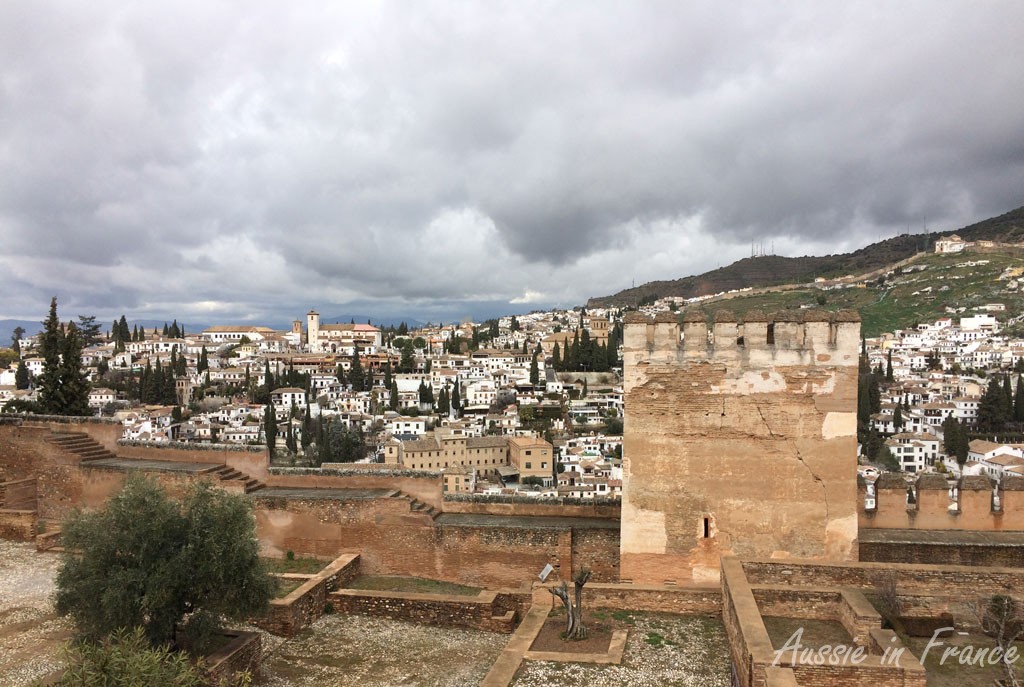 Mirador San Nicolas from the Alhambra

We walk back down to the correct entrance and wander around the gardens waiting for 2 pm. We can see the Mirador San Nicolas opposite where we took our photos of the Alhambra the day before.  It’s at the top of our double hill road. We can also see the troglodyte houses in the side of the hill. 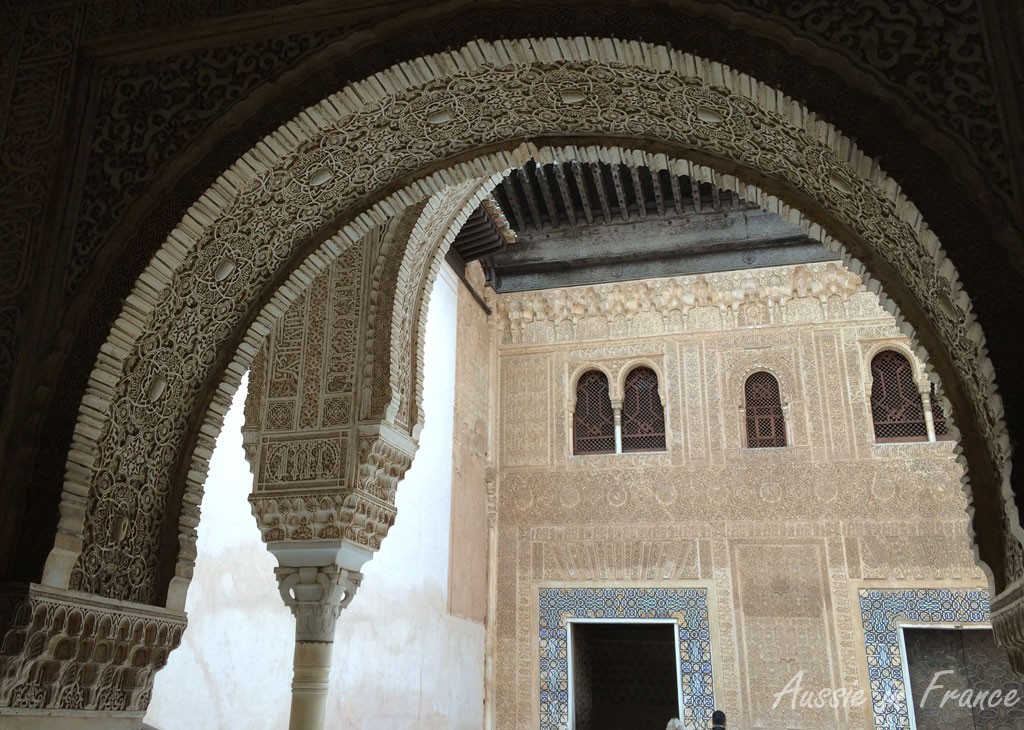 One of the many beautifully carved archways

We begin our visit of the Alhambra. It’s full of people taking photos of each other in front of every single visible arch which somehow detracts from the atmosphere. There is no furniture, but mainly intricately carved Arabic inscriptions in the form of geometrical patterns, with painted tiles on the walls. I have to confess it’s all a bit repetitive for me and it is absolutely freezing cold as well. 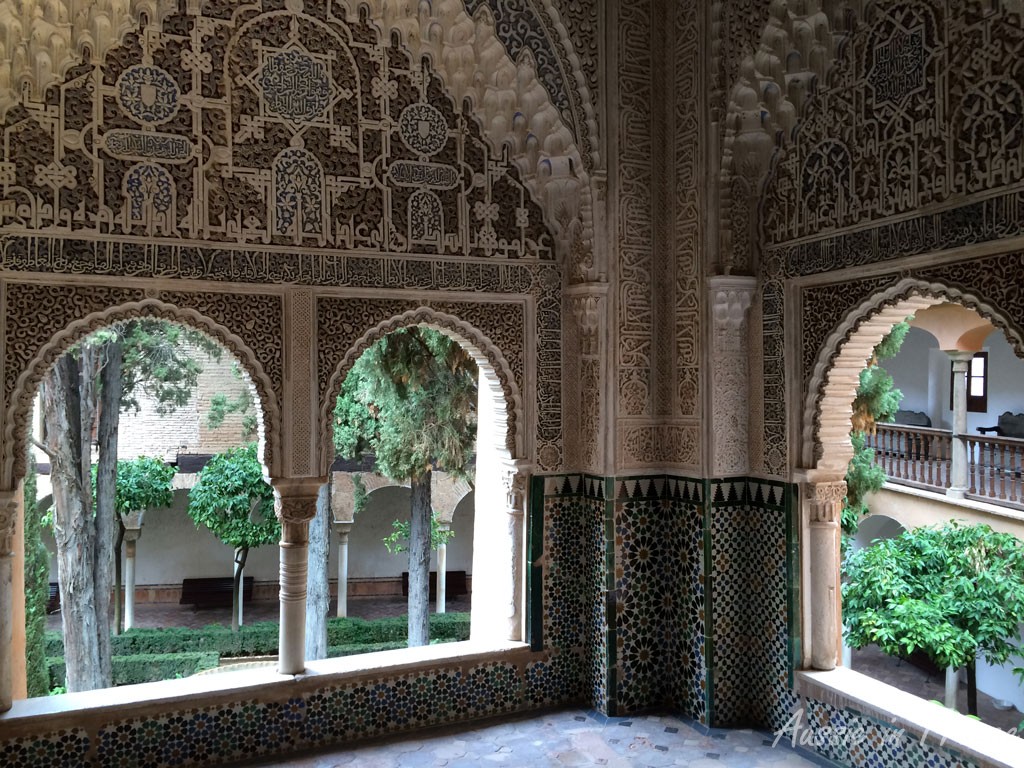 Opposite windows looking over an inside garden

I do like the different patios with their fountains and greenery which are no doubt a welcome break from the steamy hot weather that most people experience in Grenada. 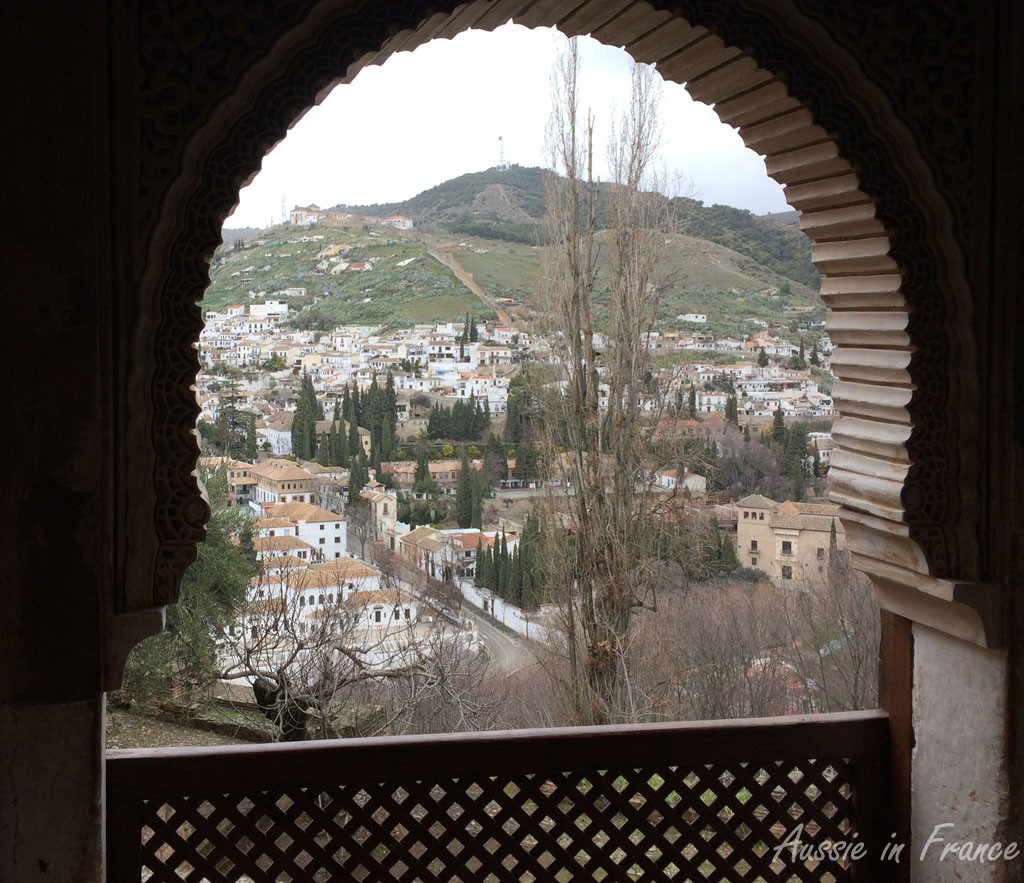 One of the many keyhole views overlooking the surrounding countryside

The path out of the palace takes us through more gardens and past stunning views of Grenada to the Palace of the Generalife and the Upper Gardens which we also try to imagine in the warmer weather. 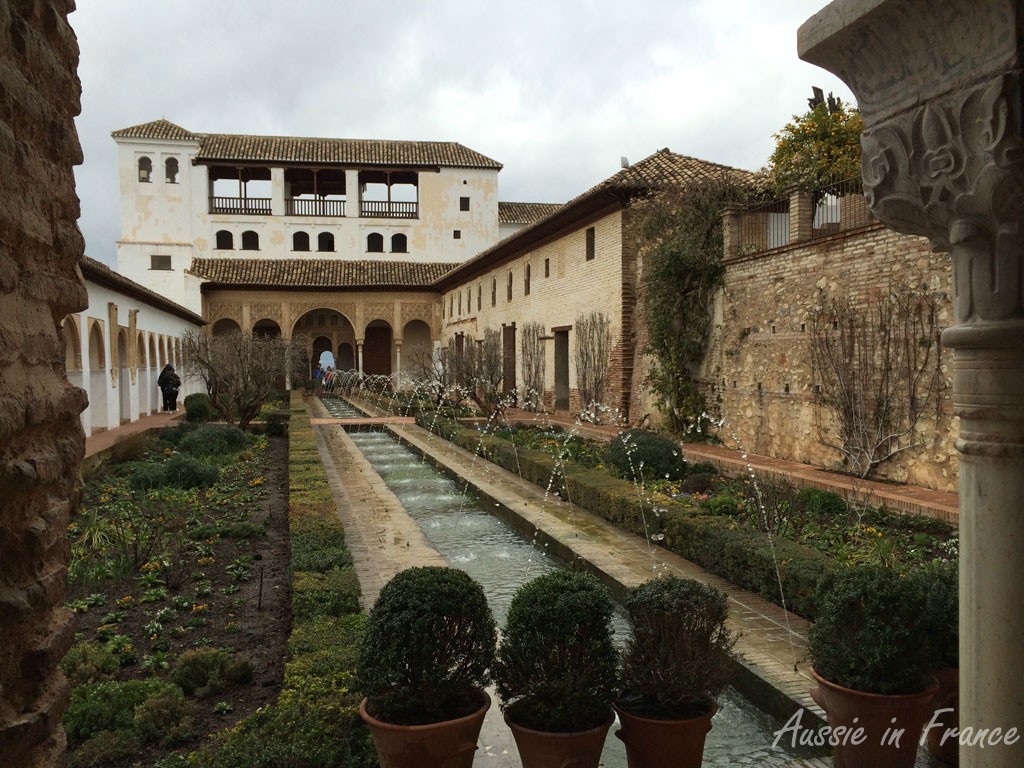 The Generalife palace and fountains

We finally emerge an hour and a half later (the visit is supposed to take 3 hours). It’s spitting and we’re cold. Let’s find somewhere to have hot chocolate and churros we both decided of a common accord. 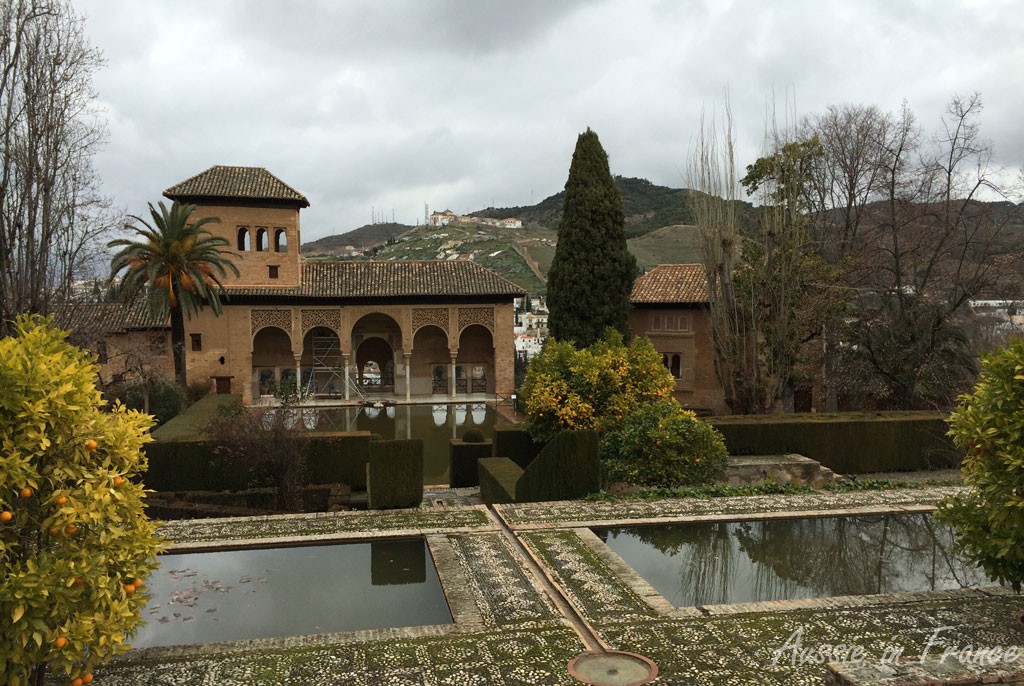 In the gardens walking towards the Generalife

We ignore the touristy places at the bottom of the hill and head for Gran Via de Colon. On the left we see a promising-looking place appropriately called Via Colon. We order our chocolate and churros and sit back in eager expectation. We have very fond memoires of eating the same thing in a very famous place in Madrid called Chocolateria San Giné. 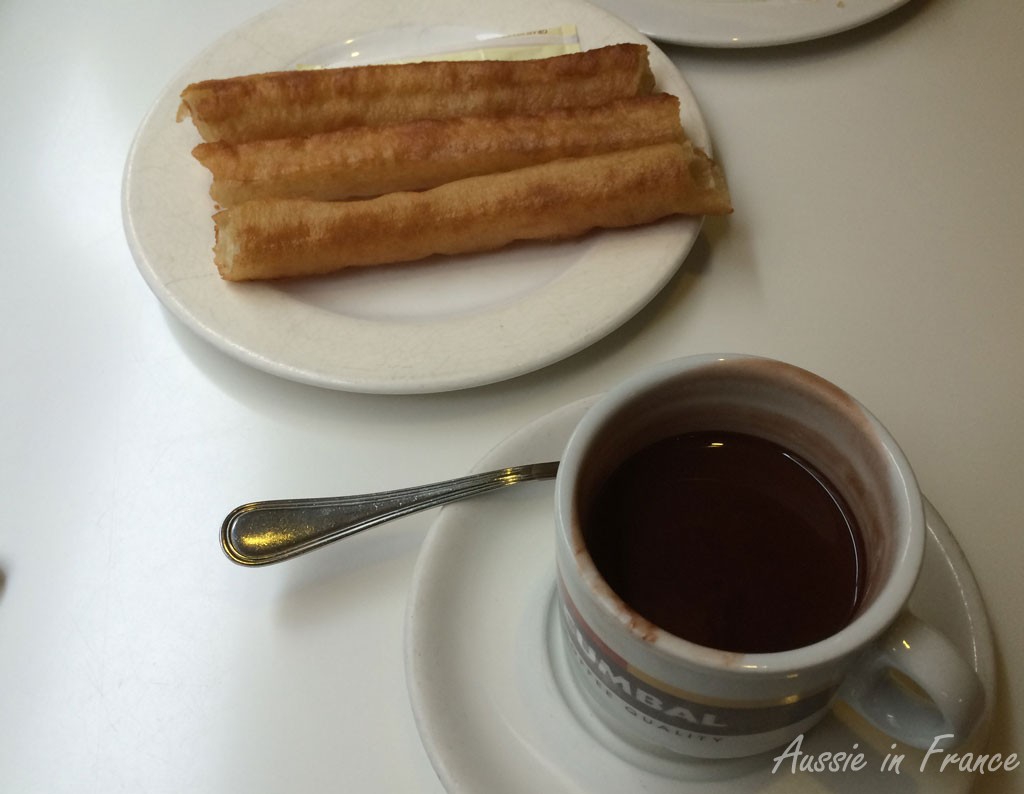 The hot chocolat, which arrives first, is OK but the churros are very disappointing. They are large and a bit tough and SALTY. We coat them with sugar and dip them in our hot chocolate but it doesn’t improve them much. Jean Michel orders a chocolate cake with a strange spice in it to get rid of the salty taste. I reckon we might have done better in one of those touristy places after all!

This entry was posted in Architecture, Art, Restaurants, Sightseeing, Spain and tagged visiting the Alhambra. Bookmark the permalink.

17 Responses to Sunny Spain and the Alhambra