Jean Michel’s first retirement project is finished. All five doors on the front façade of Closerie Falaiseau now have glass panels instead of three glass and two solid wood doors. The difference in light is amazing! 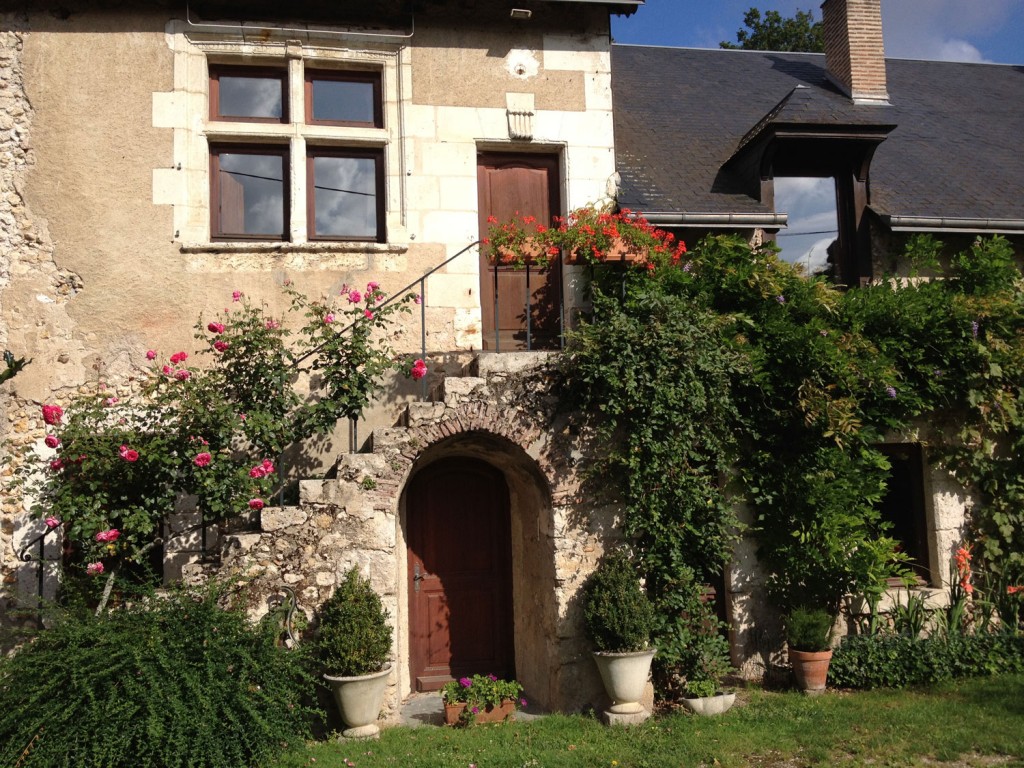 Closerie Falaiseau, with the two solid wood doors seen from the outside

The first step in November is to order the new glass. The next step, in December, is to block up the ground floor doorway with glass wool insulation while the first door is being converted. It’s winter after all! 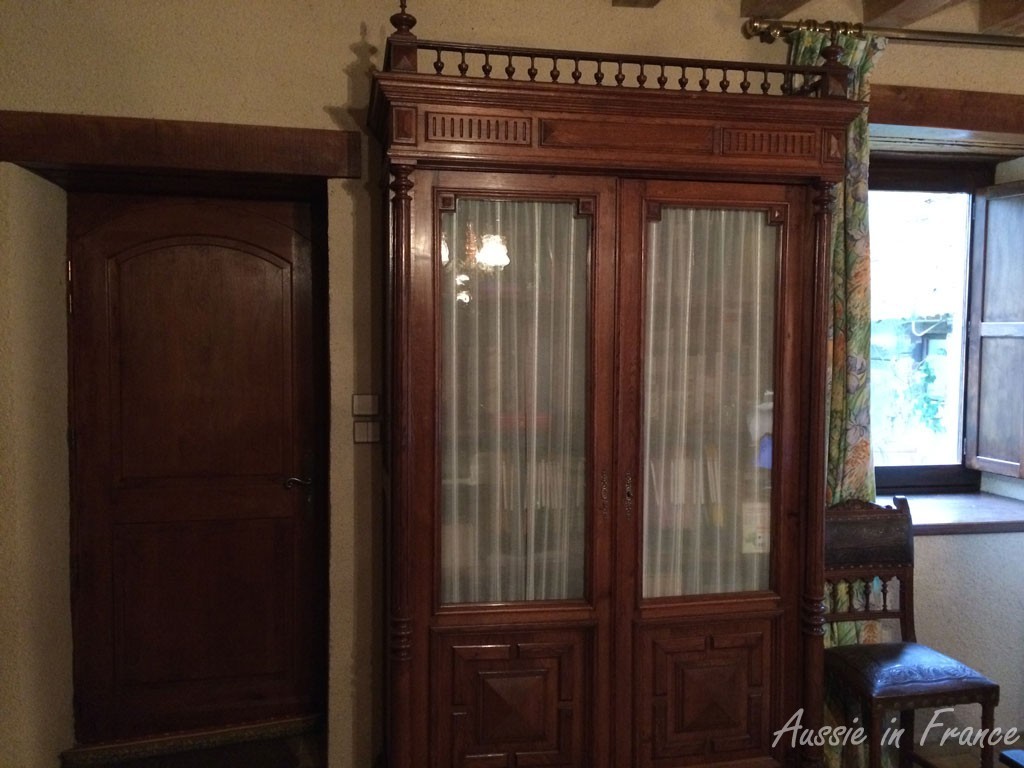 The door in the office with its wooden panels

To replace the solid panels with glass, the surrounds have to be removed. Jean Michel  is hoping to be able to use them again but he soon realises that it won’t be possible. He’ll have to make new ones. 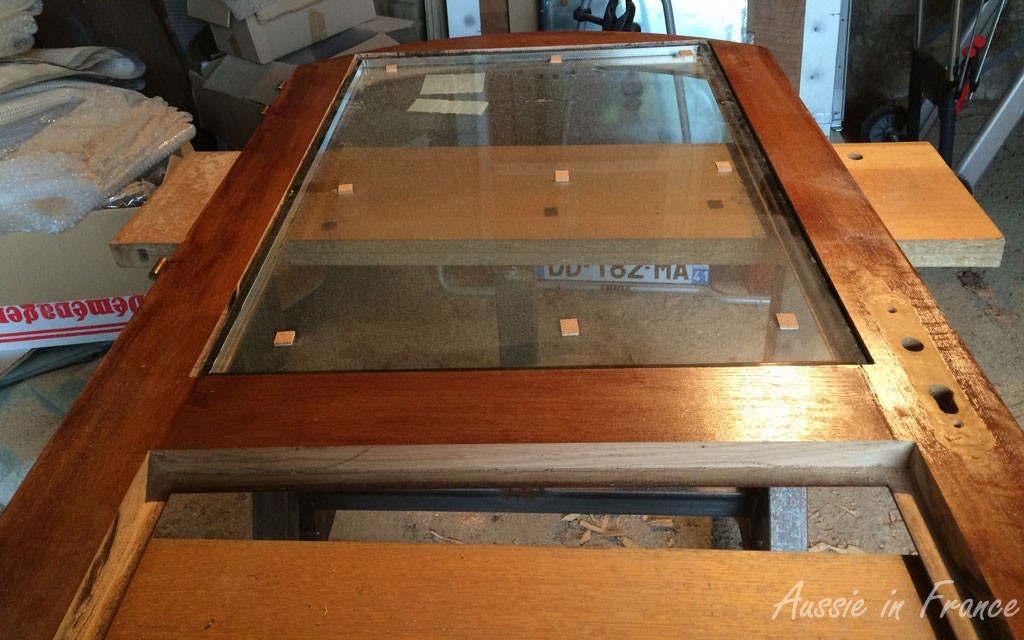 The door with one glass pane

After the surrounds and solid panels have been removed, the glass panels are fitted and work on the new surrounds begins. This door is quite tricky because the top is curved to go under the arch. The glass has a straight edge of course but there isn’t a lot of leeway because it’s regulation double glazing and very thick.

The first door is now finished and ready to be hung. I’m just about to help Jean Michel carry it across the courtyard when our helpful neighbour Alain walks past and lends a welcome hand. 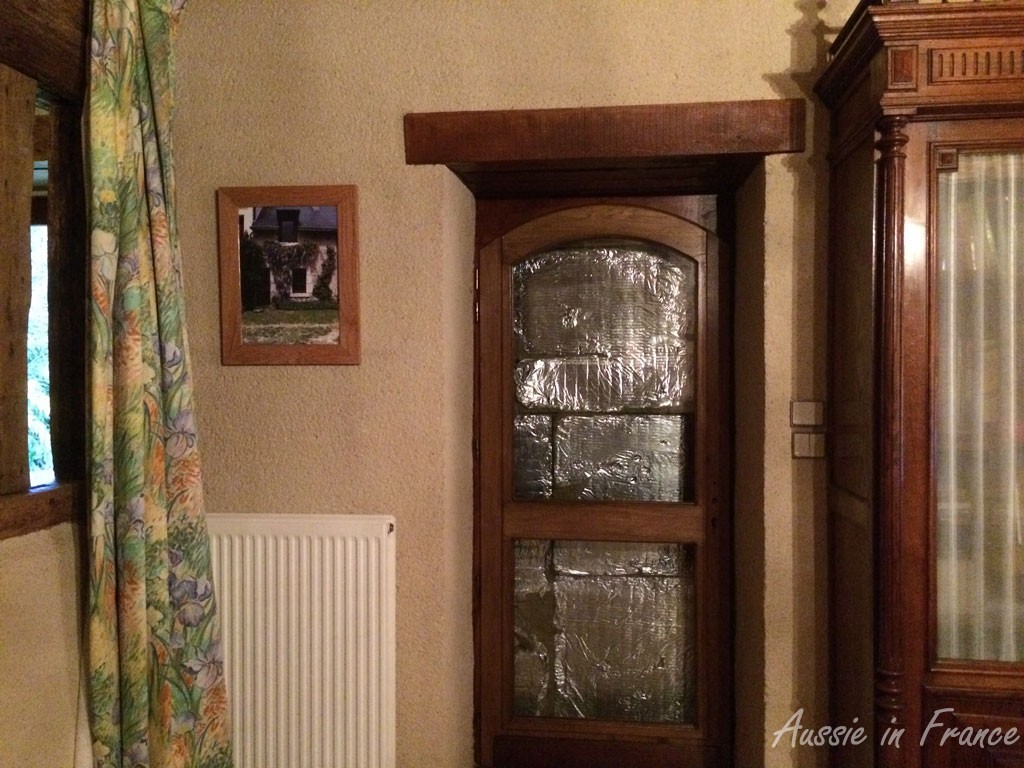 Door in place with the glass fibre insulation behind

The door’s up and looking good. All that has to be done now is to remove the glass fibre insulation outside for the light to come streaming through into the office. 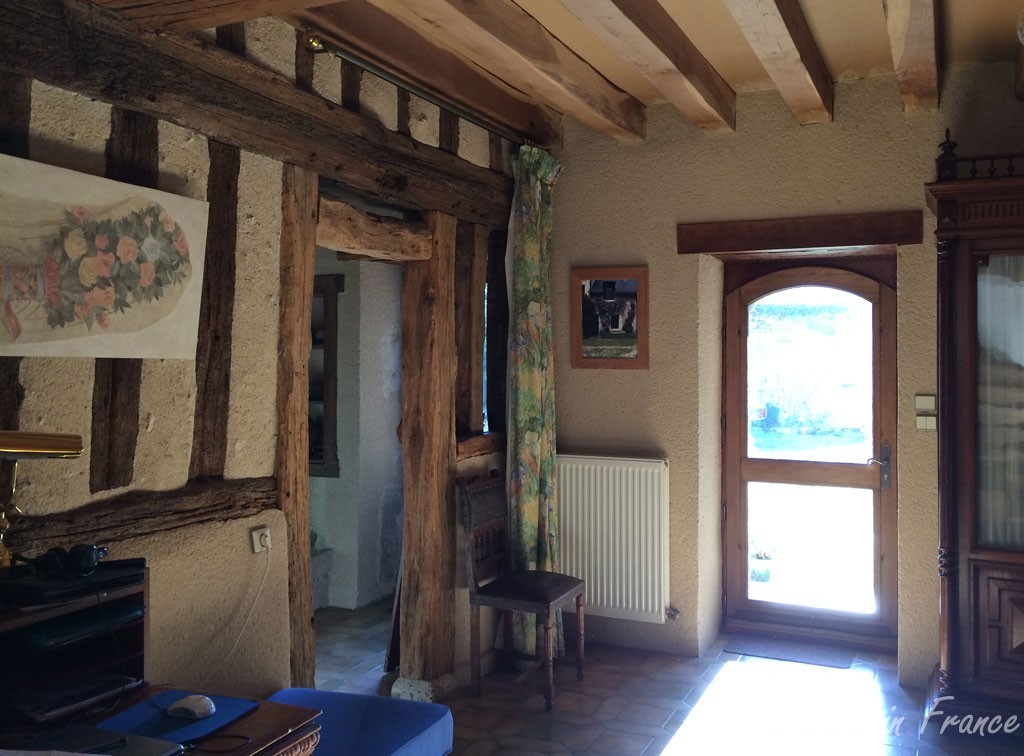 Light flooding into the office in the morning

The final step is to make the wooden shutter that will protect us from burglary and keep out the cold at night in winter. It obviously has to be identical to all the others in the house. 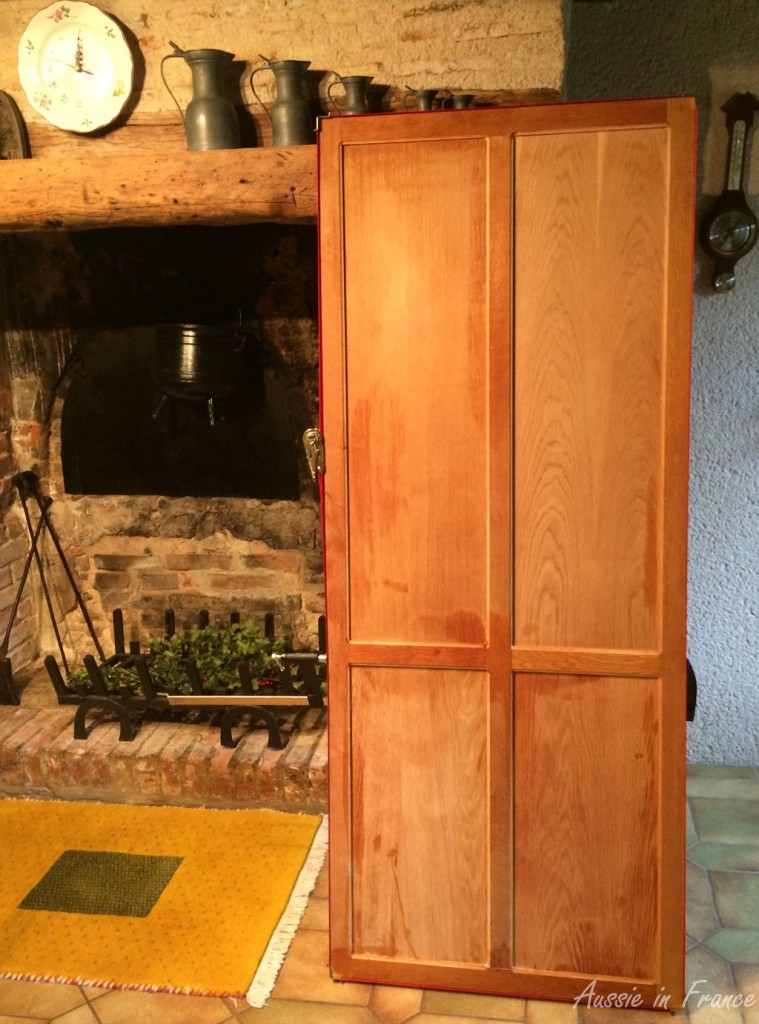 Once he has finished making it and put on the first coat of varnish, Jean Michel brings it into the kitchen to dry as the temperatures are going down fast. 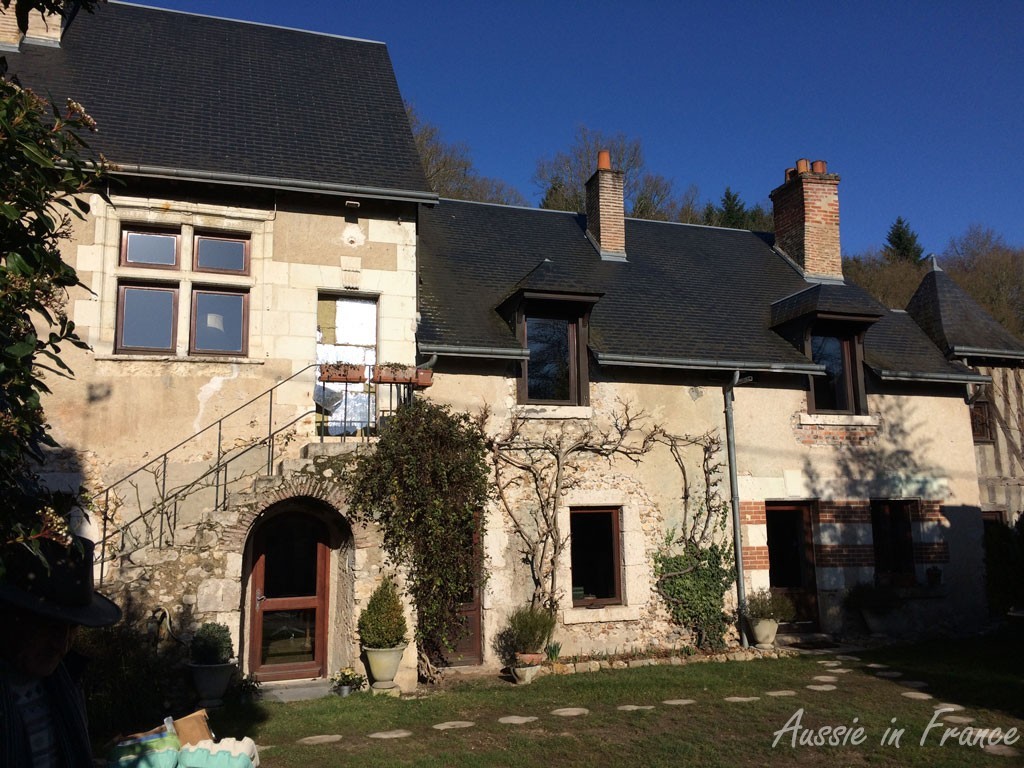 Various events get in the way – my flu, Granada, etc. – before he is able to start the second door. Initially it goes much faster because he has already gained experience. He knows he won’t be able to re-use the surrounds so doesn’t have to take such care removing them. 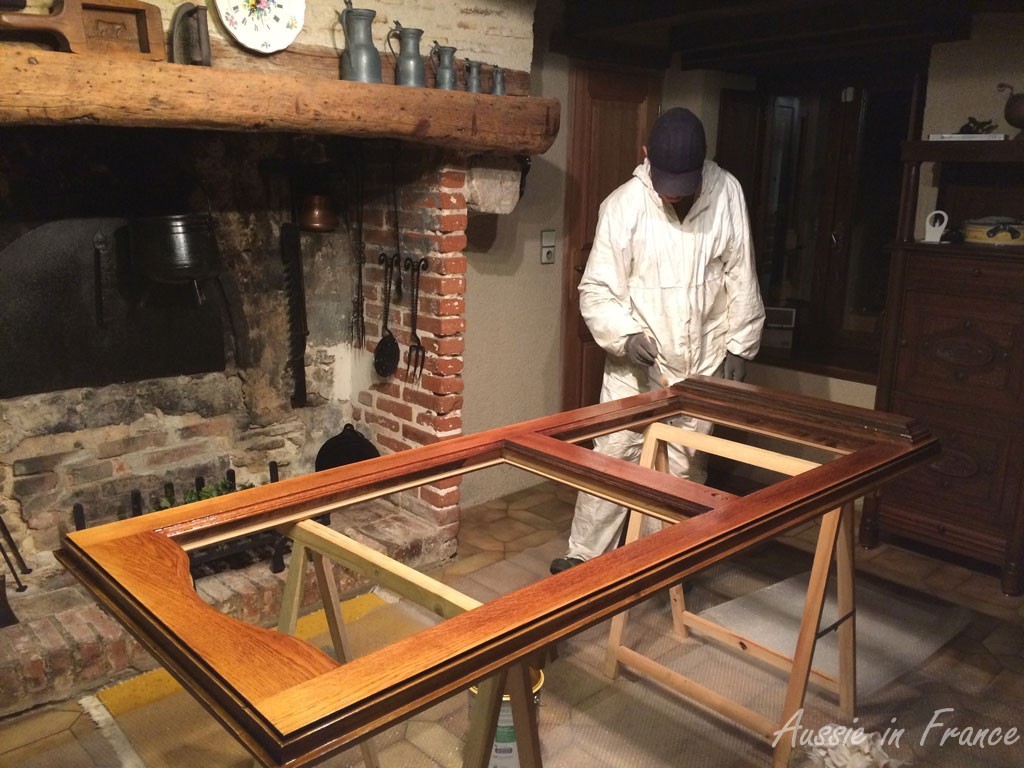 Staining the door in the kitchen out of the cold

However, it’s February and it’s much colder outside so the even the varnish on the door has to be done in the kitchen or it won’t dry. It’s also very cold in the garage where Jean Michel is working. 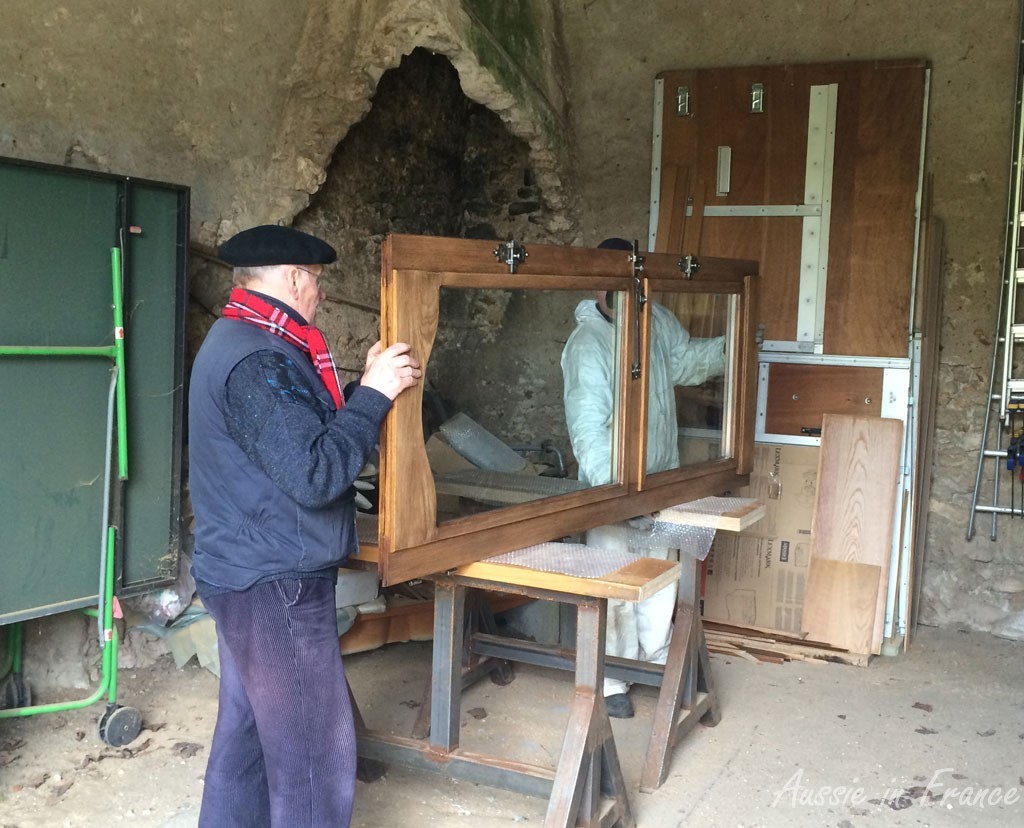 Alain to the rescue again

This time, since the door has to be carried upstairs, he makes an apointment with Alain to come by rather than trust to luck. 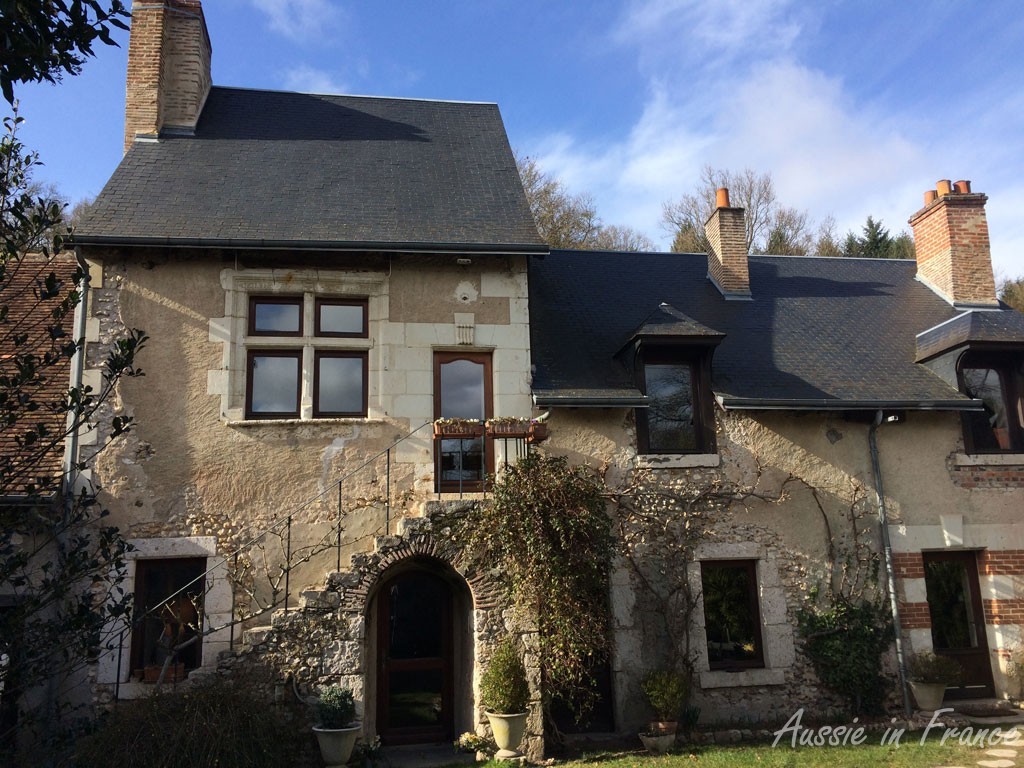 The house with the two new glass doors

We’re delighted with the result of course, but we’re surprised to see that the door looks narrower than it did before. 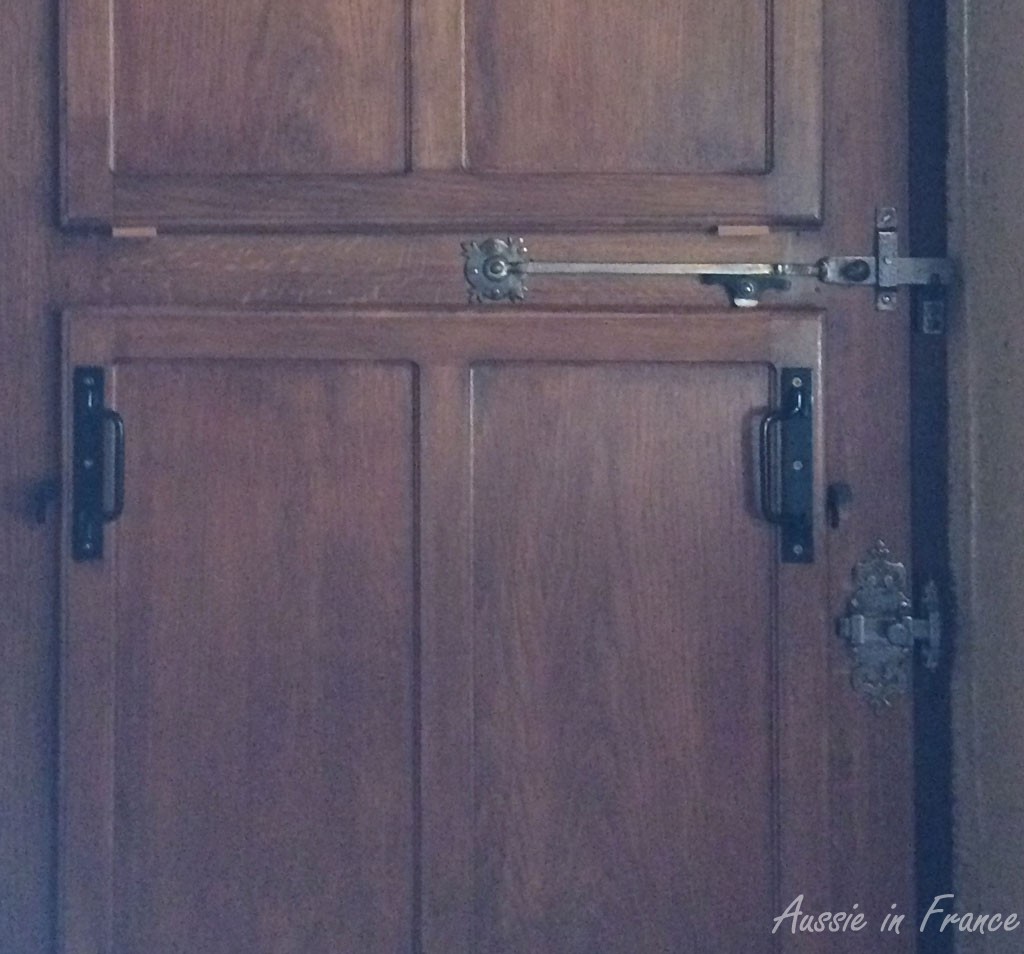 Upstairs lock with the two shutters

Inside, you can see the locks and bolts better. 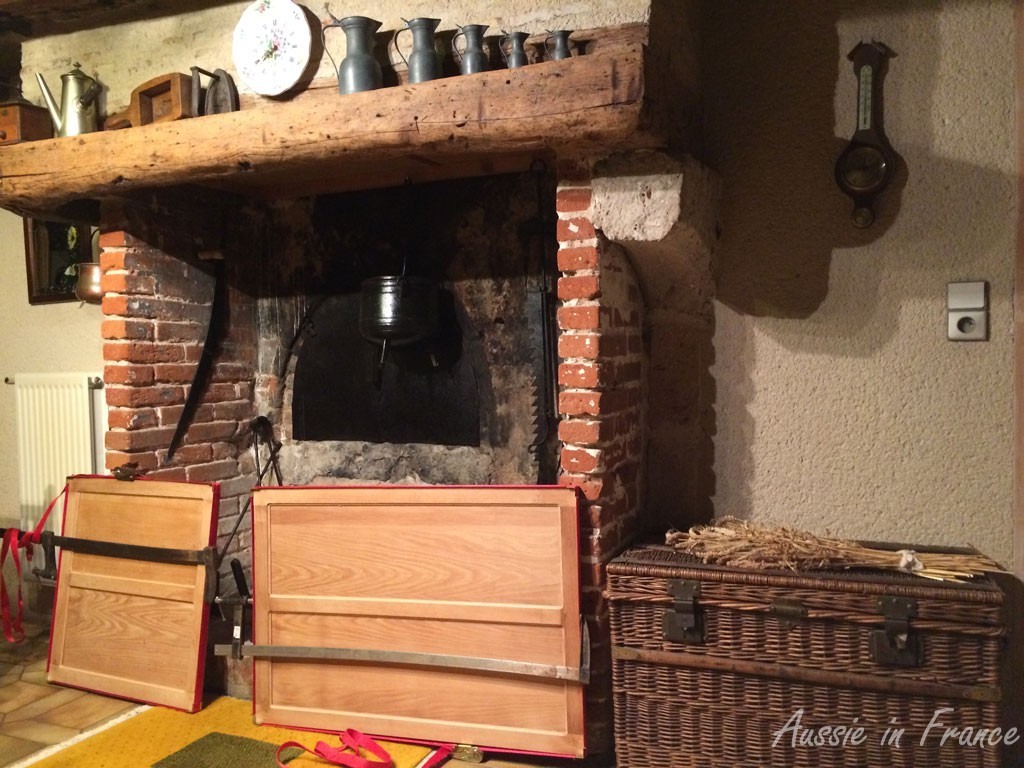 Because of the position of the lock, two shutters are needed this time. But as I explained in an earlier post, a little problem arises when Jean Michel is using the plunge router to make the profile on the edge of the surrounds. A screw comes loose and causes a bigger hollow than he intends. Fortunately, though, after a short rest, he’s able to rectify matters. 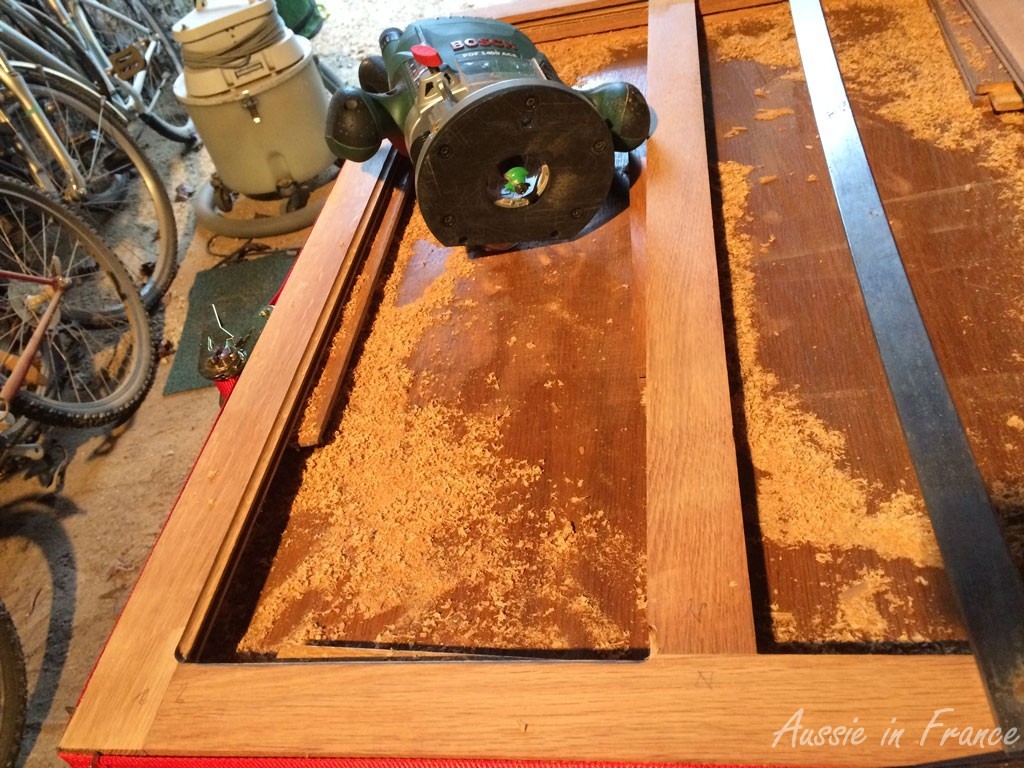 The delinquent plunge router that lost its screw

I volunteer to help with the varnishing this time but it’s a technique I’ve never used before (very different from painting) and I’m afraid I’ll make a mess of it so I leave it to Jean Michel who has a lot more practice. 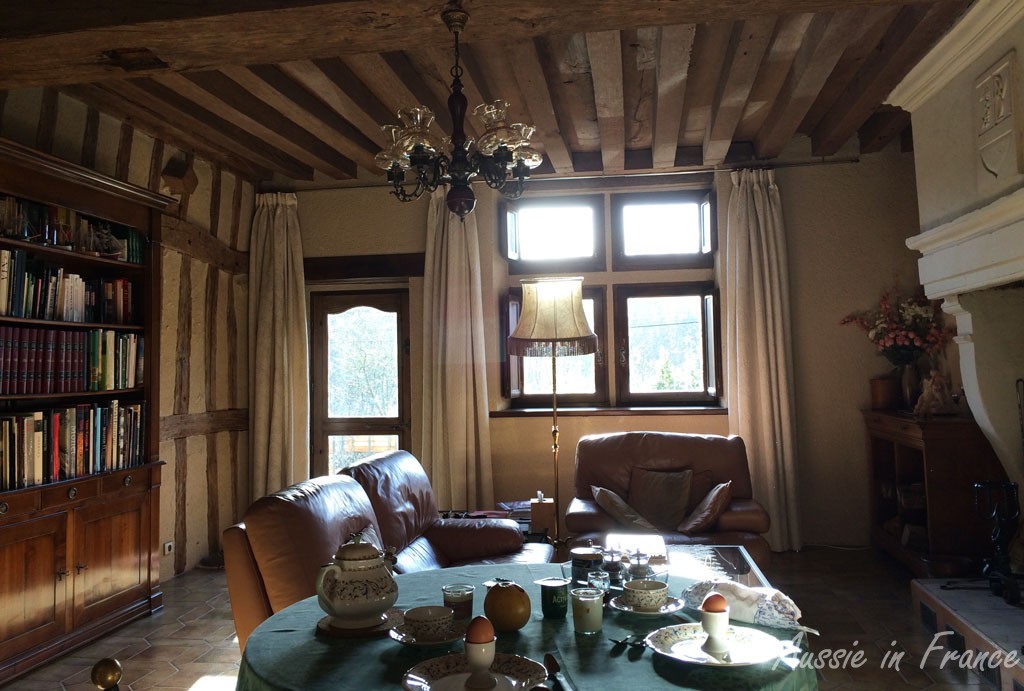 Initially we’re not used to having the glass panels and the corresponding light and we keep thinking we’ve left the door open!  Now in the morning when we have breakfast in the upstairs living room, we don’t turn our chairs in the direction of the fireplace as we do at night, but towards the door and the countryside beyond. More light at last!

This entry was posted in Closerie Falaiseau, Renovation and tagged glass panels on doors, renovating in France, renovations in France, wooden shutters. Bookmark the permalink.

18 Responses to More Light at Last