My daughter Black Cat is a jet-setter. She works in New York where she lives with her Flying Dutchman and goes to places such as Bogota in Columbia for the long week-end. She’s back in France for a very short time to attend a wedding near Avignon. With less than two days in Paris, where she lived for many years and still has a wide circle of friends, she is giving me a whole day of her time, which I appreciate. 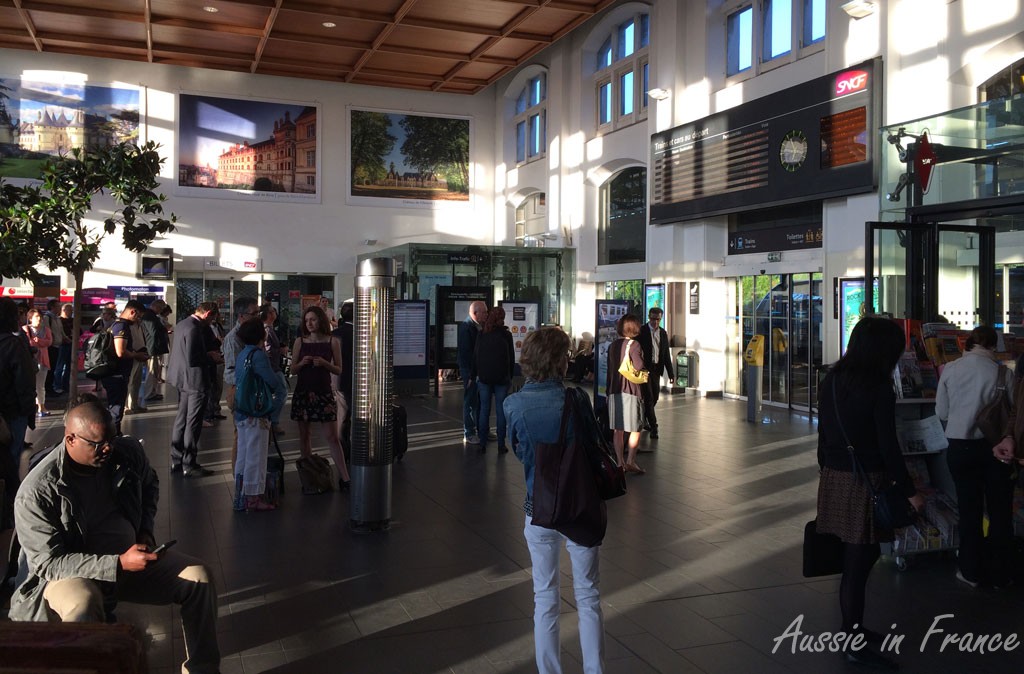 6.45 am in Blois train station

I take the 6.56 am train from Blois. I’m surprised at how many passengers there are but it’s the only direct train that gets to Paris before 11 am and it also stops briefly in Orléans. It’s bright and sunny and 12°C. Jean Michel takes my jacket from me just before I board the train because it is going to be 28°C by the end of the day! 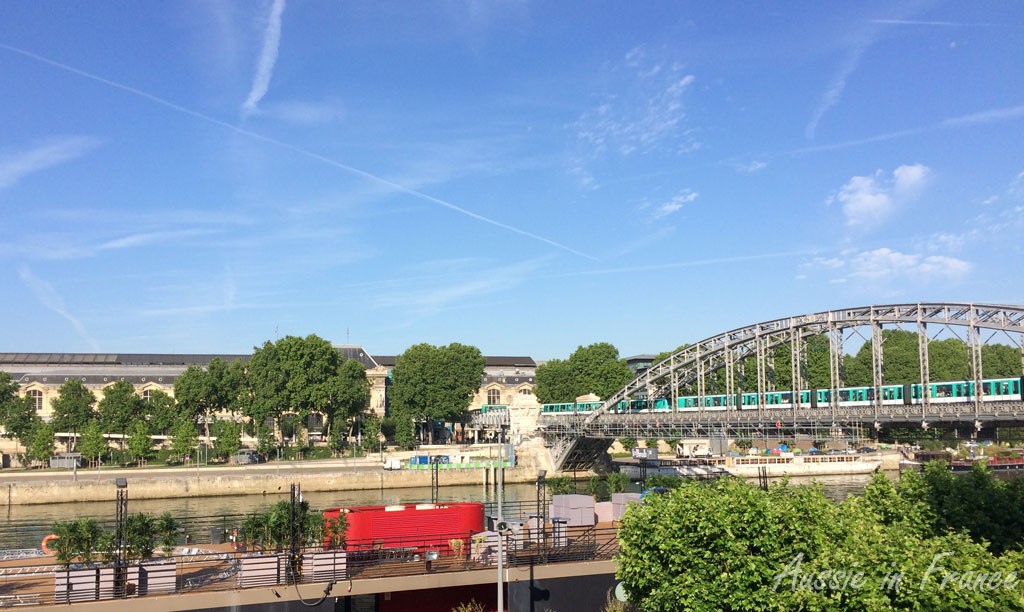 The journey takes 1 hr 23 mins. At Gare d’Austerlitz station, I start heading for Boulevard Henri IV which is 20 minutes away on foot. My iPhone says to turn left and walk along the river to the next bridge but I decide to take the closest bridge and walk down the other side of the Seine. There’s a lovely view of the station. 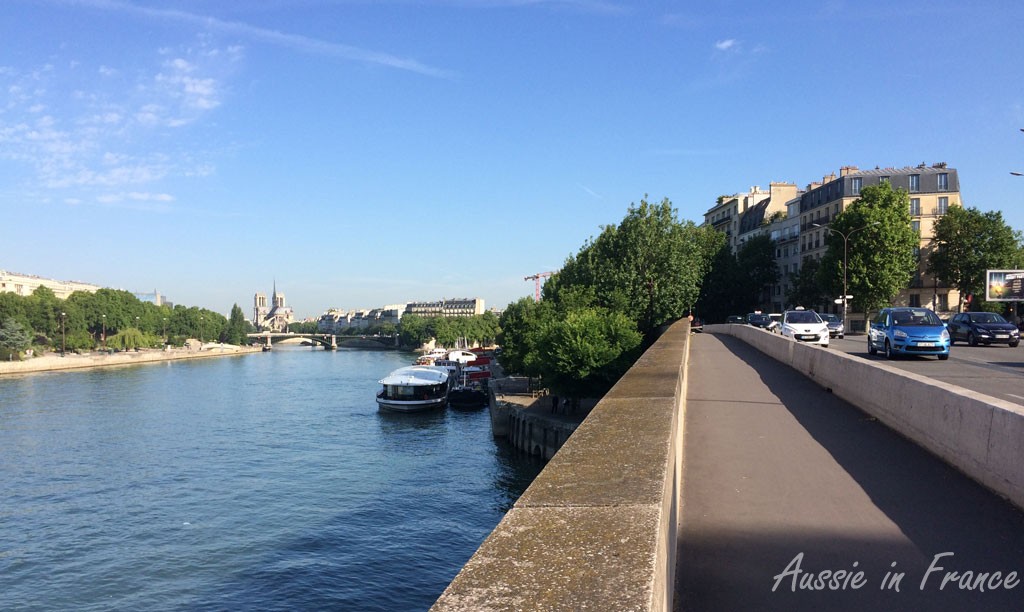 On the bike path! Great view of Notre Dame though

I cross over and turn left. Suddenly I realise I’m on a bike path next to a freeway and there is no way I can go right at the next bridge. The iPhone was right. Hmm. I have a great view of Notre Dame but am stuck on the bike path. I see that there are breaks in the freeway traffic from time to time and eventually find a metal fence I can climb over during a lull. I scoot across and heave a sigh of relief. 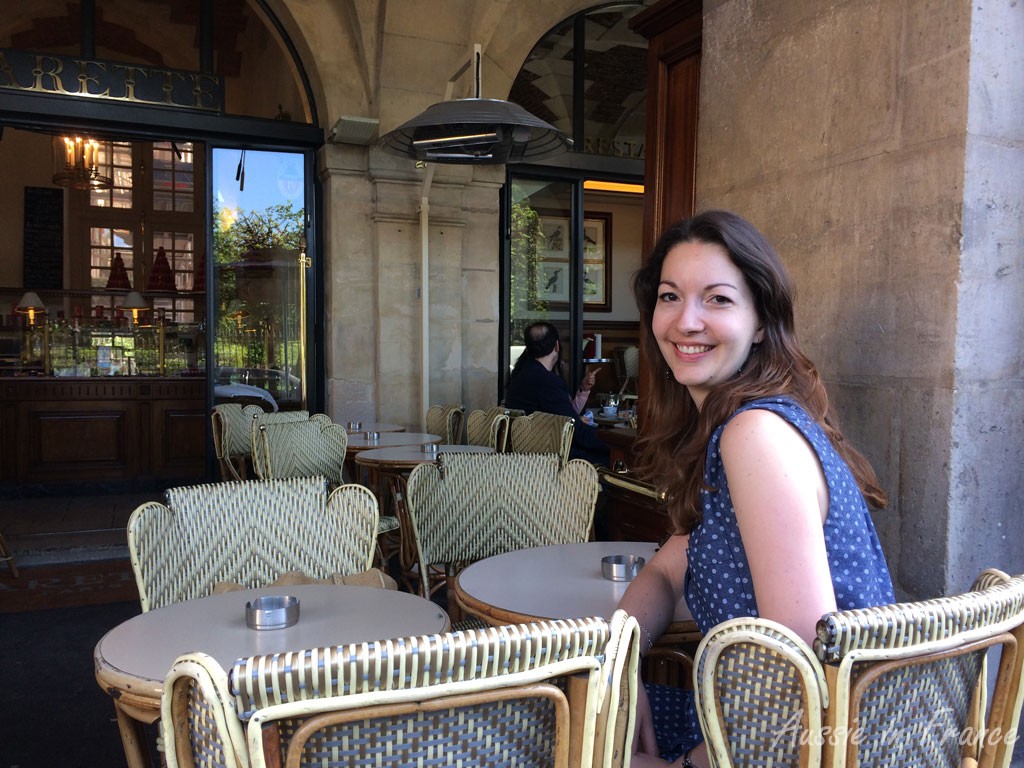 I soon meet up with Black Cat and it’s so wonderful to see her after six months, even though we often talk on Skype. I suggest we go to Carette’s on Place des Vosges for breakfast. We’re so busy talking that I don’t realise I’ve taken her to the wrong café! We get up hastily before we give our order and walk further round the square to Carette. We’re able to sit outside and take our time catching up. 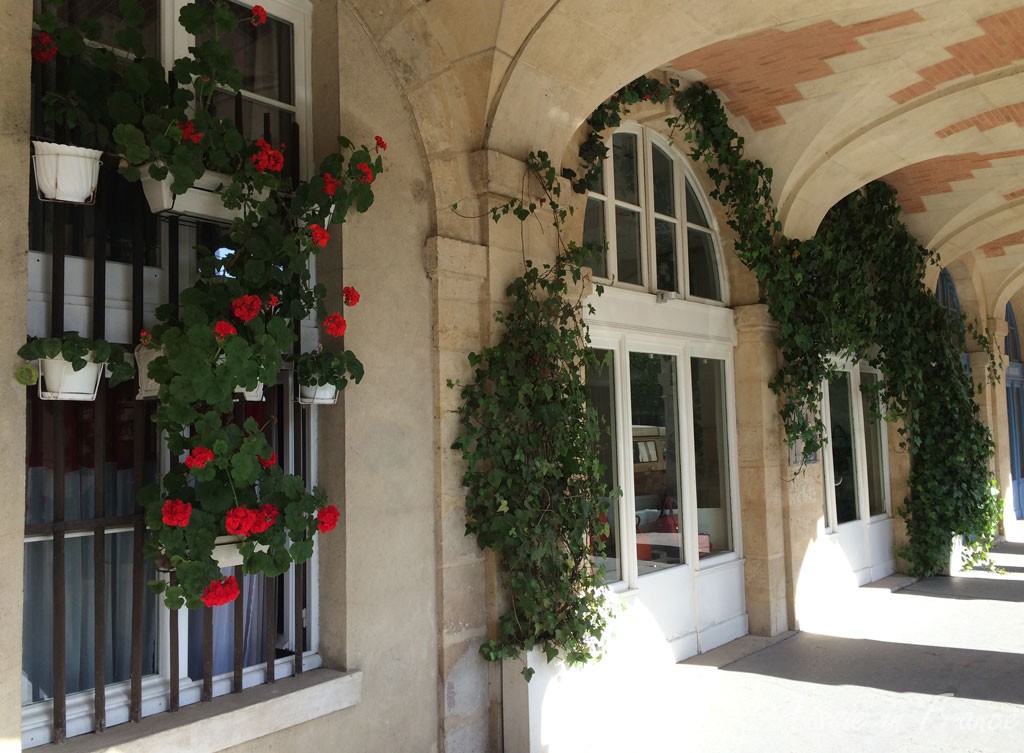 Flowers in the arcades around Place des Vosges

We eventually decide to head for the Nissim Camondo museum which I’ve already visited many years ago but after reading a post by Carolyn Barnabo on her My Sydney Paris Life blog, I’ve been wanting to go back. Black Cat has never been there. We have a long history of visiting galleries and museums together. We started when she was about 3. I used to limit our visits to one hour maximum and always take her to a select café afterwards.  She now works as a marketing manager for a prestigious art institute. 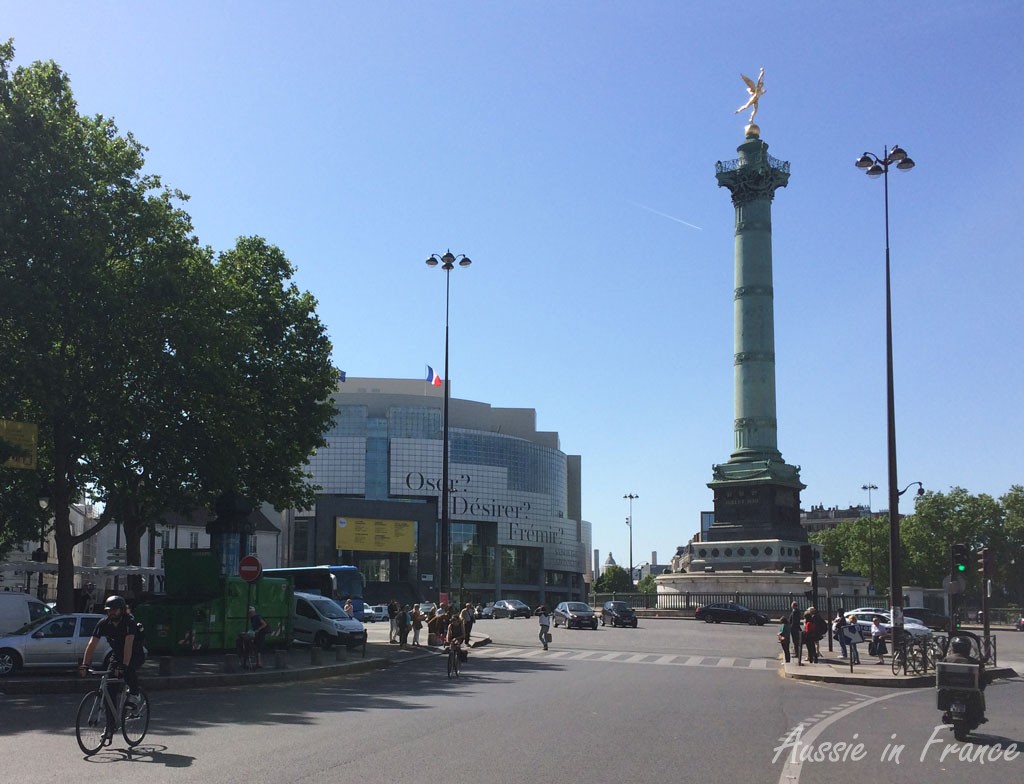 We take the bus in the wrong direction but the driver suggests we get out at Bastille and take another bus as ours has been rerouted because the King of Spain is visiting. We’re not sure what the connection is but we follow his instructions and arrive at Gare Saint Lazare. We start walking towards the museum which is next to Parc Monceau. 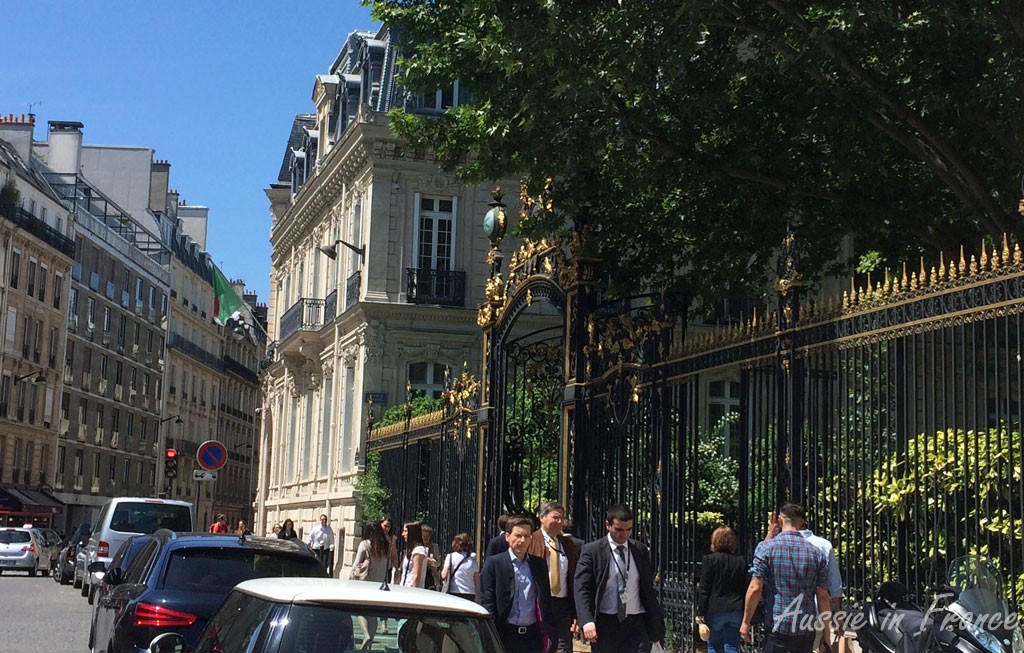 The entrance to Parc Monceau – we’re not the only ones around!

This is the first time I’ve walked any distance since my last bout of flu and I need a break. I ask what we’ll do about lunch and we decide to buy sandwiches and sit in the park. We see a Kayser bakery with a huge queue outside which amuses Black Cat. There is one in New York where you can go and buy baguettes and croissants but she says they aren’t that wonderful. We find a less popular bakery with a smaller line. 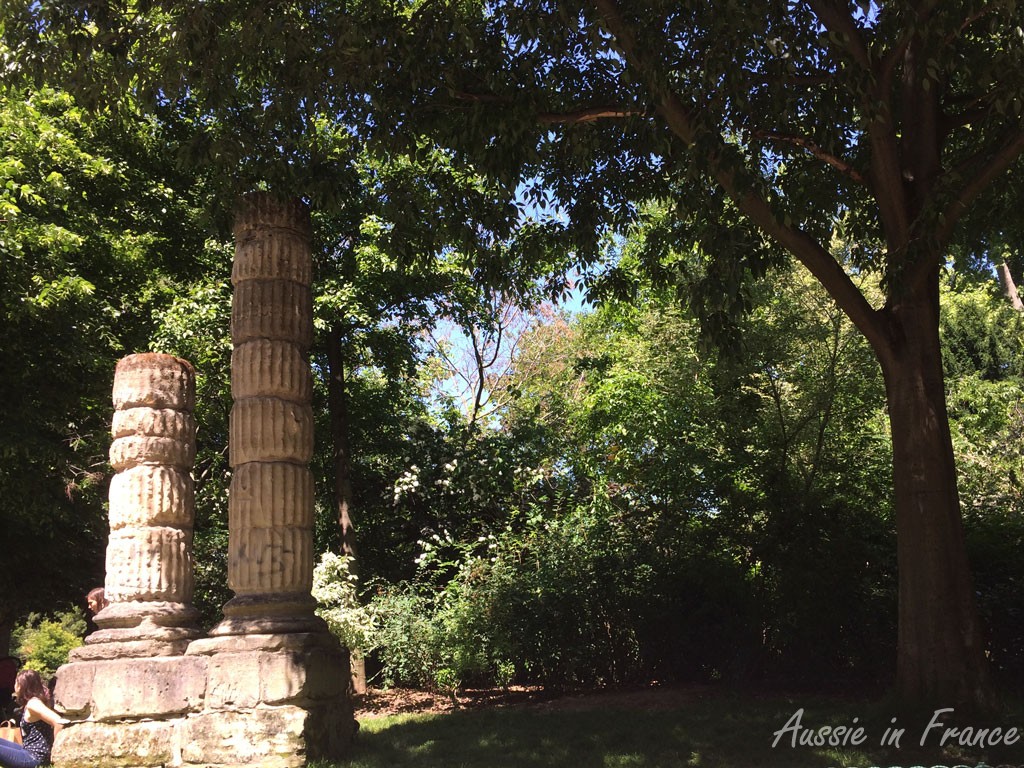 Ruins in Parc Monceau while we’re having our lunch

The park is absolutely full but we find a shady bench opposite an old ruin and I hear all about her trip to Bogota. There is a lovely old town apparently and she also visited a salt cathedral, one of three in the world ! 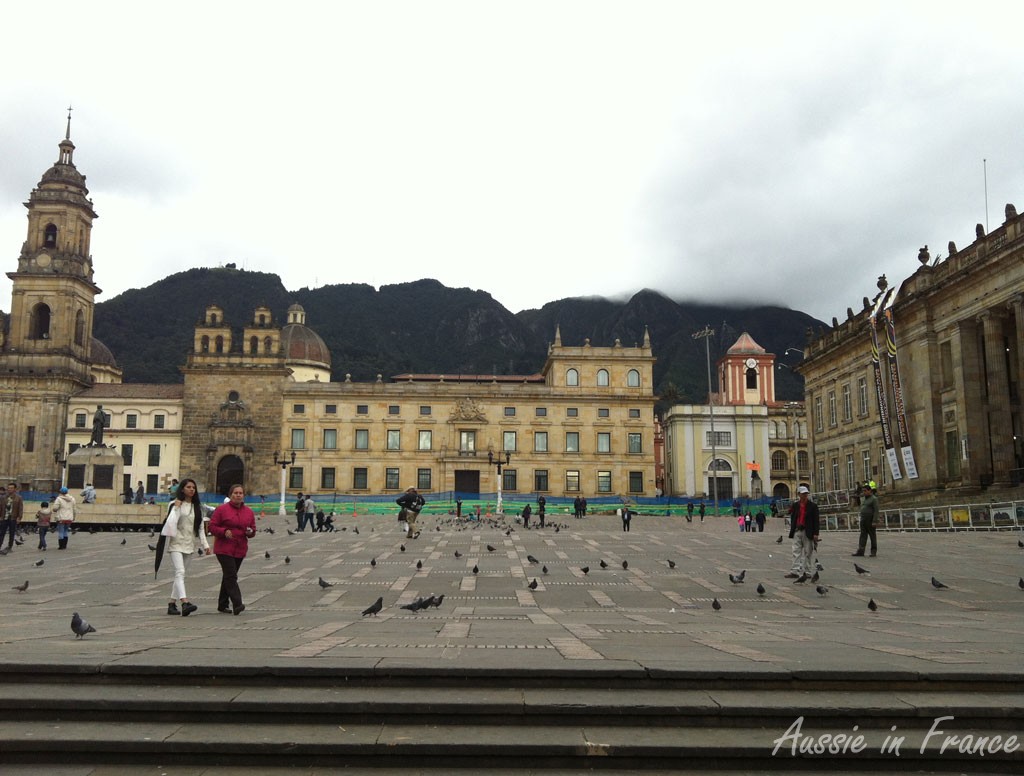 One of the main squares in Bogota

We head off for the museum and when we get there, there’s not a soul in sight ! Black Cat gets in free because of her art institute card while I pay 9 euros. We are both given audio guides. We sit down and read Carolyn’s post to get an overall idea before beginning the visit.

The classical façade of the Nissim Camondo museum

Very briefly, Moïse de Camondo, who built the house in 1911-1912 and named it in honour of his son Nissim who died in the first world war, was a wealthy Jew from Constantinople born in 1860. He was not interested in the family banking business but in art and particularly that of the 18th century. He spent his life collecting the wonderful pieces that are in the museum today. 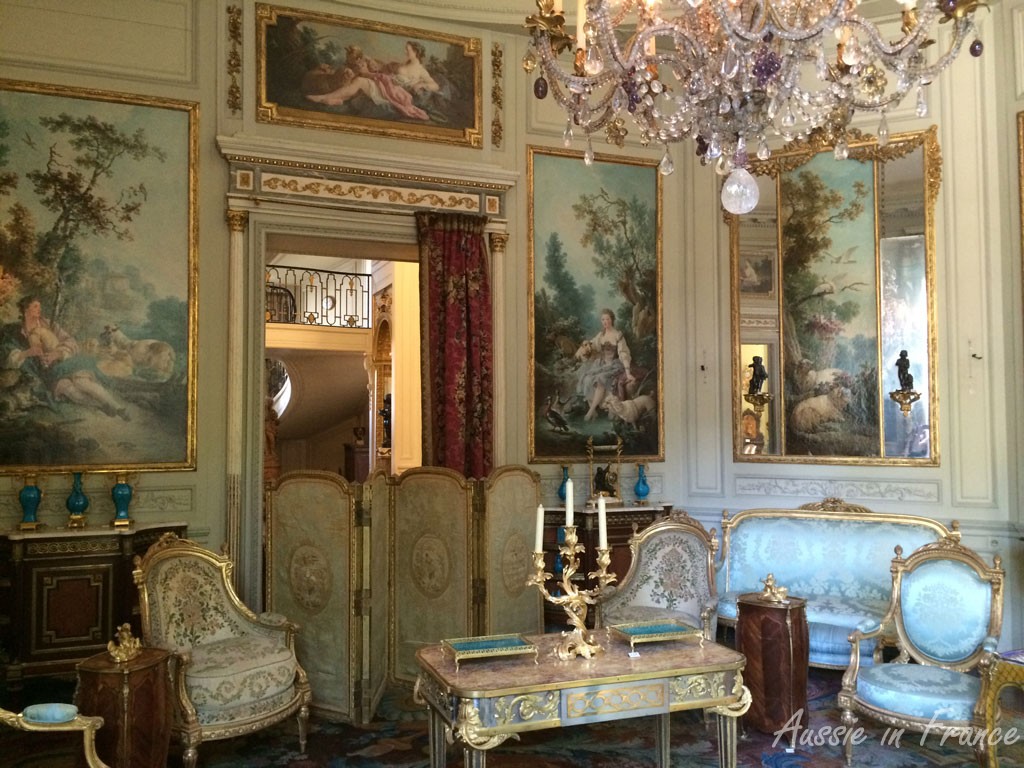 The house is still as it was during Moise’s lifetime

His much younger wife ran off with the manager of the family stables, leaving him with his son Nissim and daughter Béatrice. After Nissim was killed, Béatrice devoted herself to her father and when she married  Léon Reinach, also from a family of distinguished Jewish bankers and intellectuals, they both lived in the family house. 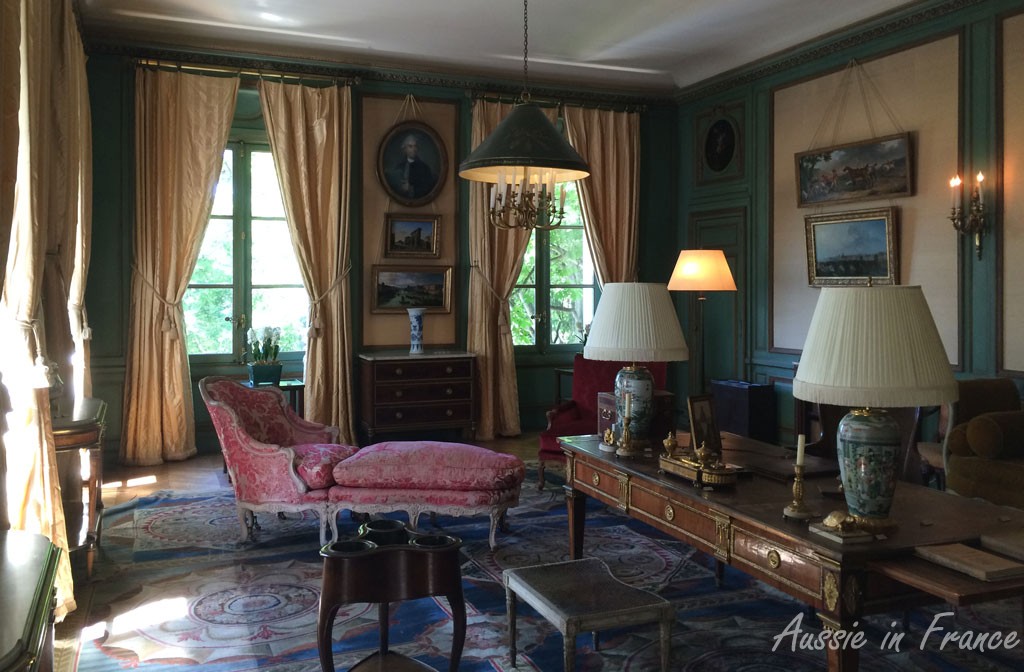 One of the upstairs rooms with its windows overlooking the park

They had two children, Fanny, born in 1920 and Bertrand, born in 1923, after which they moved into their own home, not far away. Moïse became an increasing recluse and devoted himself entirely to his collection. When he died in 1935, Béatrice executed his will to the letter and the house became an annex of the decorative arts museum the next year. 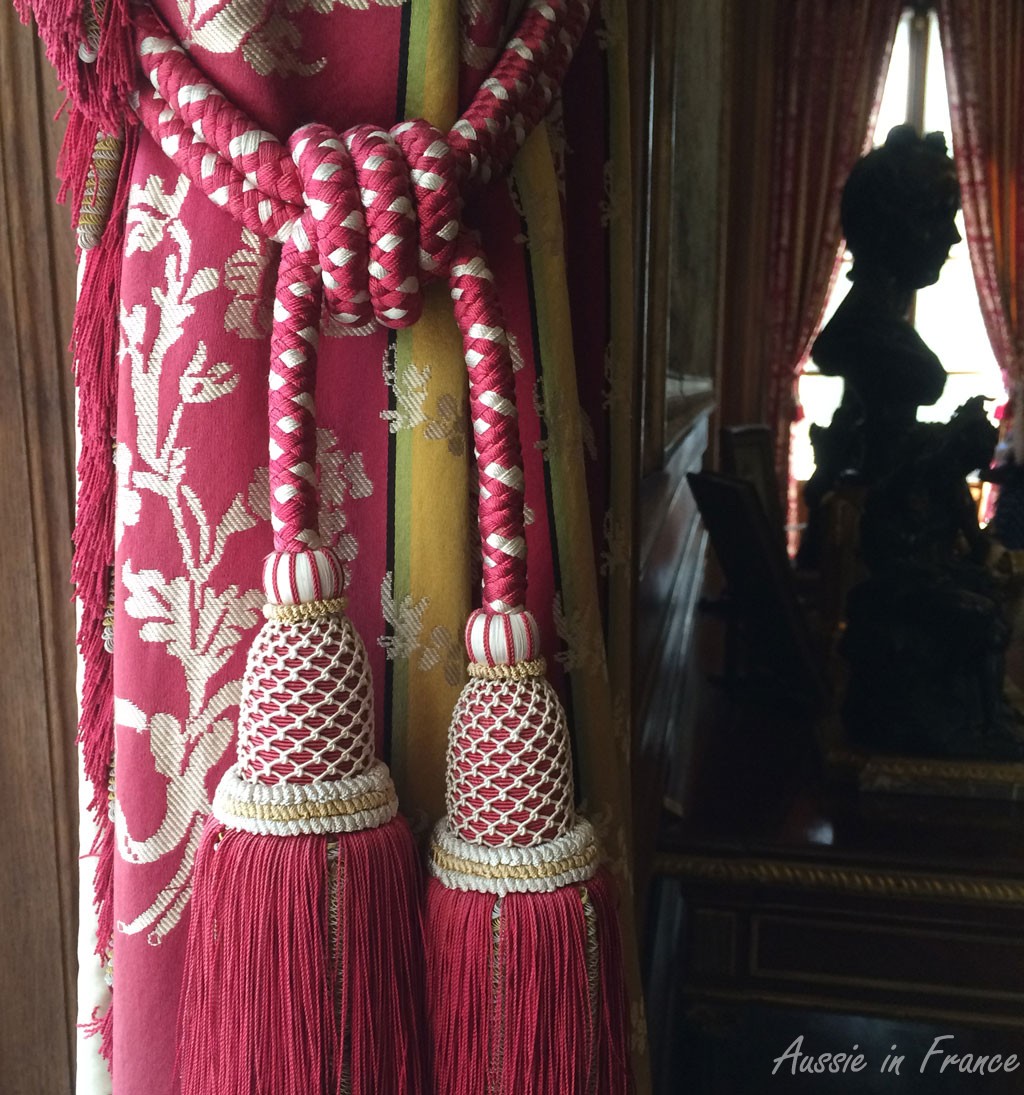 The tassels on the curtains are exquisite

Béatrice was not overly concerned with the situation of the Jews during World War II!. After all, her brother had died for France and her father had bequeathed his house and all his art collections to the state. She was also a French citizen. 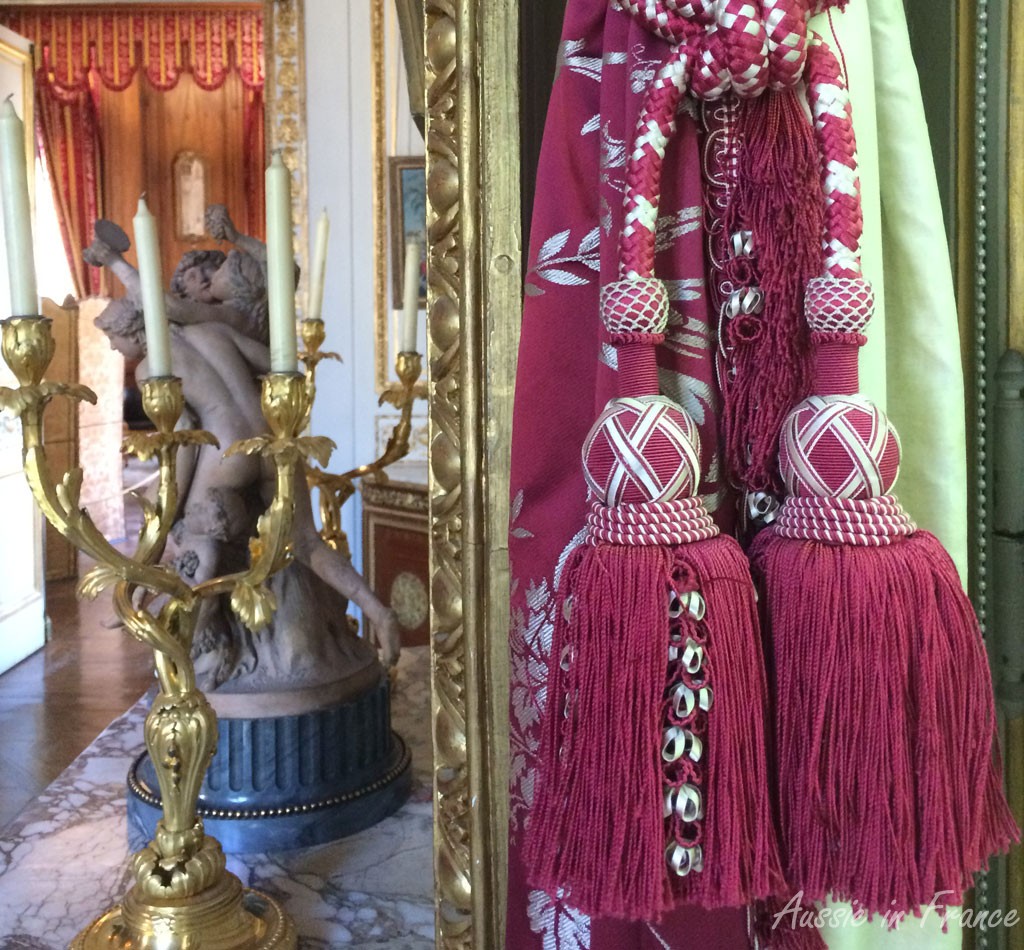 How, the entire family – Béatrice, Léon, Fanny and Bertrand – was arrested and interned at Drancy deportation camp in France before being taken to their deaths in Auschwitz in 1943 and 1944. 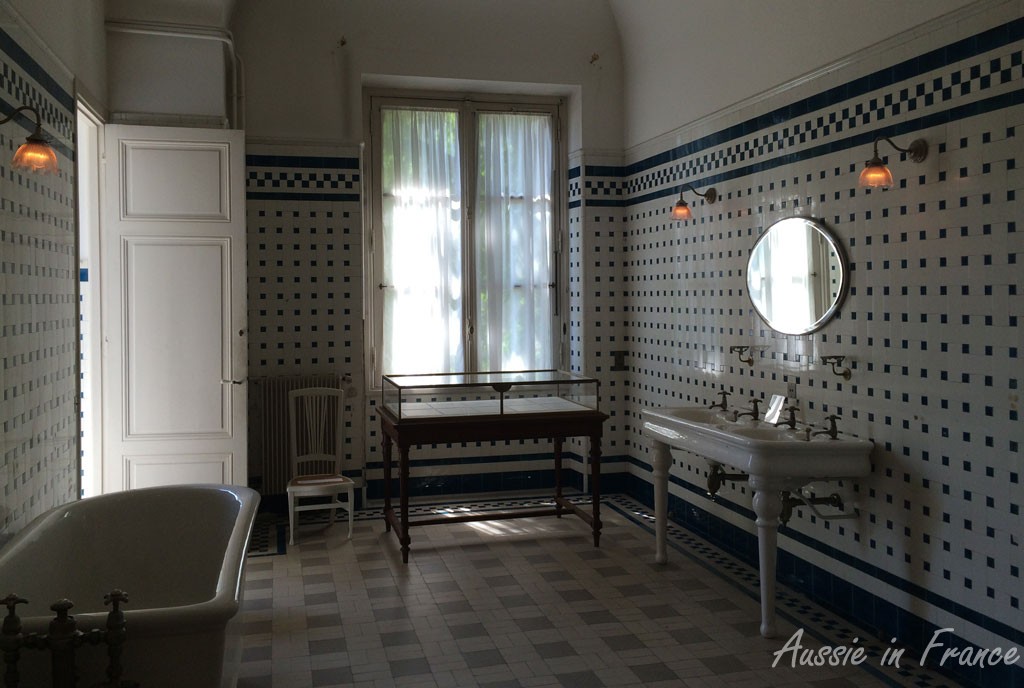 One of the bathrooms. The left door leads to the toilet which has an opaque window overlooking the park.

The house has been beautifully preserved and is a delight to visit. The rooms are serene and stately with windows giving onto Parc Monceau below. At the time, no expense was spared and there are a lot of “modern” conveniences such as well-appointed bathrooms and a built-in kitchen. 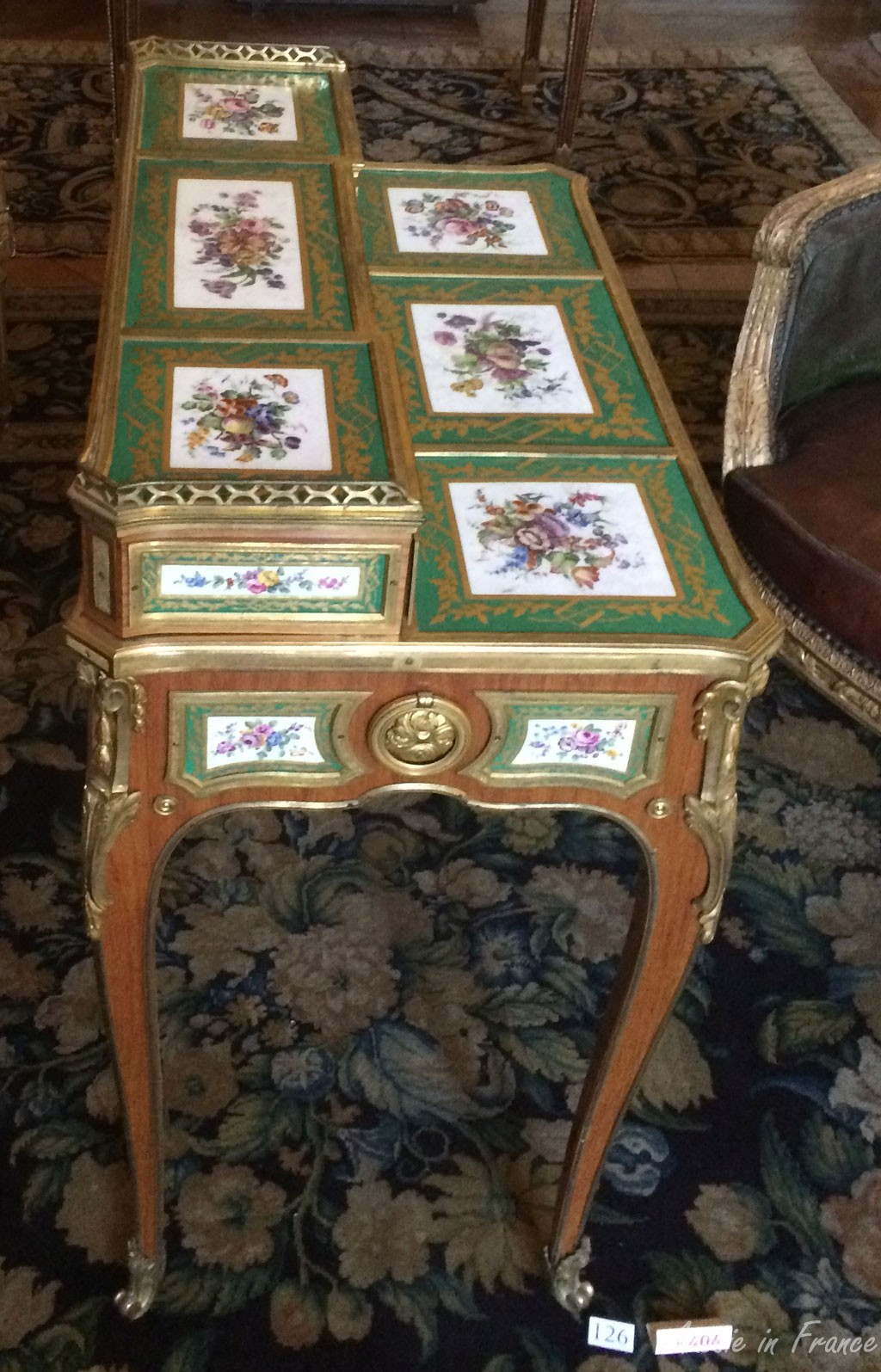 I am particularly taken with the tassels on the curtains, which I always find fascinating. With our audio-guides we can find out more about various objects such as the lovely and very rare enamelled desk in one of the living rooms. 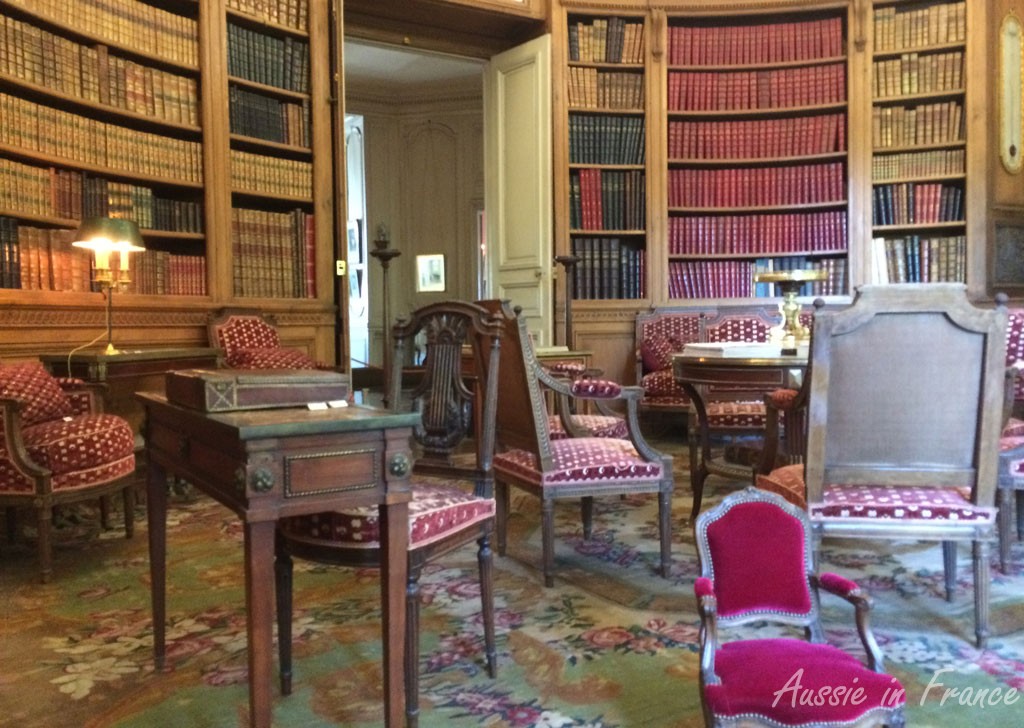 As we are about to see a short film on the Camondos, a young German art student stops to share her delight with us. “My fellow students at the Louvre kept telling me about this museum but I didn’t imagine how wonderful it would be,” she says. “It’s like being in someone’s house.” Which sums it up exactly! 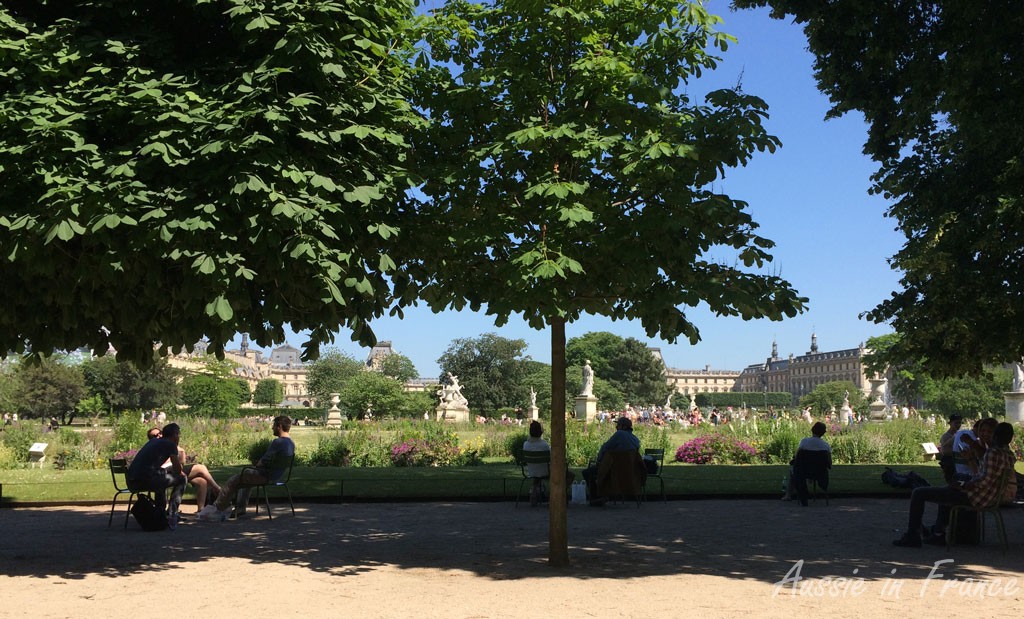 The view of the Louvre from Café Diane

After visiting the museum, we take another bus, this time to the Tuileries Gardens where I want to sit under the trees in my favourite Café Diane and look at the Louvre. 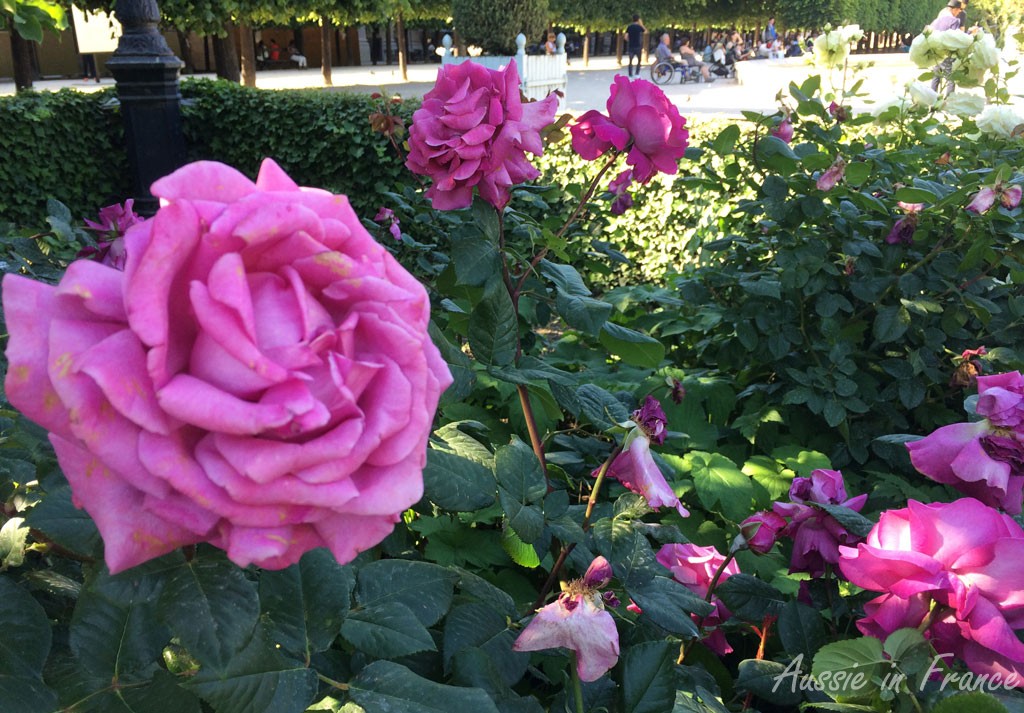 My favourite highly scented roses in the Palais Royal gardens

We head over to Bourse via the Palais Royal gardens where I lived for 8 years up until October 2014 because I want to smell and photograph a particular rose bush. I am a little bit nostalgic looking up at my previous balcony but it soon passes and we leave, as I have a train to catch and Jean Michel is waiting for me at the other end. Tomorrow is our wedding anniversary. 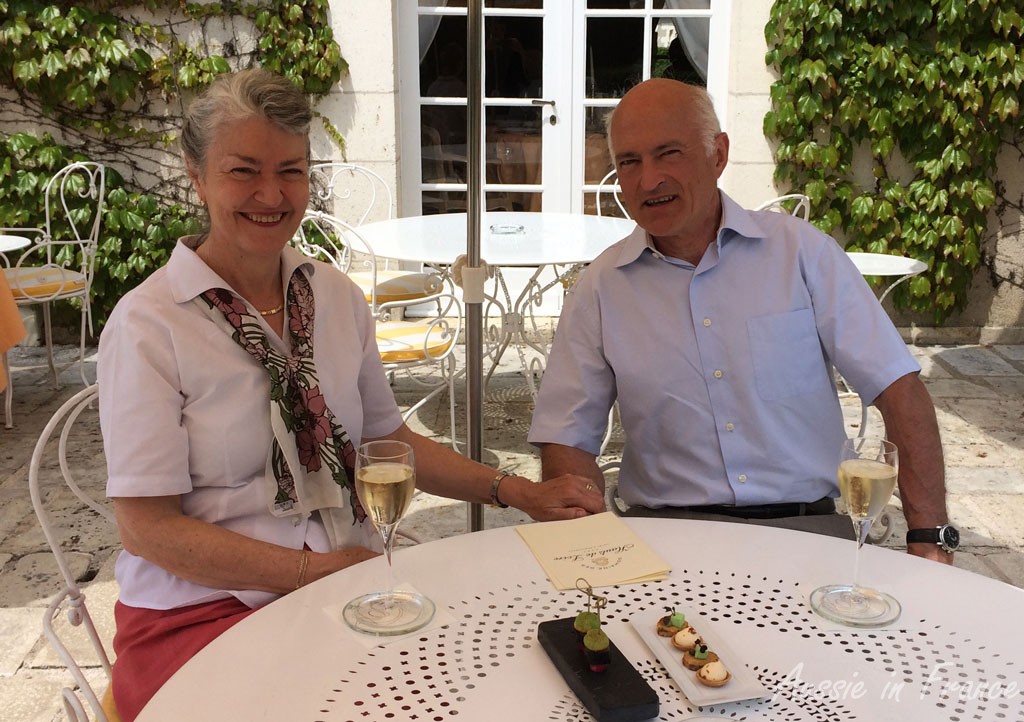 We say goodbye in the metro and go our separate ways. I’m sad to end such a wonderful day with my lovely daughter.