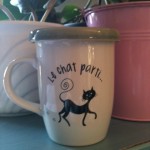 “Black cat entre home. Y’a pas happy moi. Moi pleure. Black cat parti. Moi happy.”  A direct quote from Black Cat at the age of 2 ½ when a stray cat came into the house and upset her. And that is typical of the way she used to talk. Growing up in a family where Mum spoke English to her and her brother and to the occasional English-speaking friend but French to her father, she assumed everyone spoke both languages. So I guess she just took the first word that came into her mind or the easiest to pronounce.

I did wonder whether she would ever manage to speak normally. A few months later, when she started maternelle (the French state-run pre-school that begins at about the age of 3), the teachers had me a bit worried. “She’s obviously very clever and knows how to do a lot of things. It’s a pity we can’t understand what she’s saying though”, they told me. As well as mixing up the two languages, she had a few pronunciation problems such as “fwing” for “swing” and “wabbit” for “rabbit”. I had no trouble understanding her of course, but that’s often the case, isn’t it, even if there’s only one language involved.

By the time she was six, she had become much more comprehensible but had practically stopped speaking English even though she could understand everything I said. We went to Brittany on holidays and met an English family with a little girl the same age. They got on marvellously and her English seemed to reappear out of nowhere. When we left, however, I explained to her that if she continued to talk to me in French, she would forget how to speak in English and wouldn’t be able to talk to her little friend the next year. We struck a bargain. Whenever she spoke to me in French, I would pretend I didn’t understand; she would know that I really did understand, but she would then say it in English. It took about three months. Ever since, she has always spoken to me in English.

When she was born, I asked Leonardo, who was three, to speak to her in English, which he did until one day, about three years later, when we were staying in a camping ground. They were playing with some other children and he was obviously embarrassed about being different. He looked her straight in the eye and said, in French, “From now on, we’re always going to speak to each other in French”, and Leonardo being Leonardo, that was the end of that.

They both went to French schools so didn’t learn English officially until they went to high school at the age of 11. Their English was always way ahead of the others but it didn’t necessarily get them good marks.  Both did German as their second foreign language, but it wasn’t their strongest subject either. I think they imagined that languages just came automatically and you didn’t have to actually learn them the way you did with maths and science.

It was not until Black Cat went to Australia on an exchange in her fourth year of uni that she started to sound a bit Australian. We like to call her accent “mid-ocean”.

This entry was posted in Family. Bookmark the permalink.