The outside of the new kitchen window is finally finished and we are taking a well-deserved 3-day cycling holiday. We’ve chosen Poitevin Marsh after talking to friends. It’s been on the agenda for a while and isn’t too far by car (about 2 ½ hours). I’ve reserved a B&B that looks as though it has decent beds and pillows, is air-conditioned (we’re having unseasonably warm weather at the moment) and won’t be noisy. 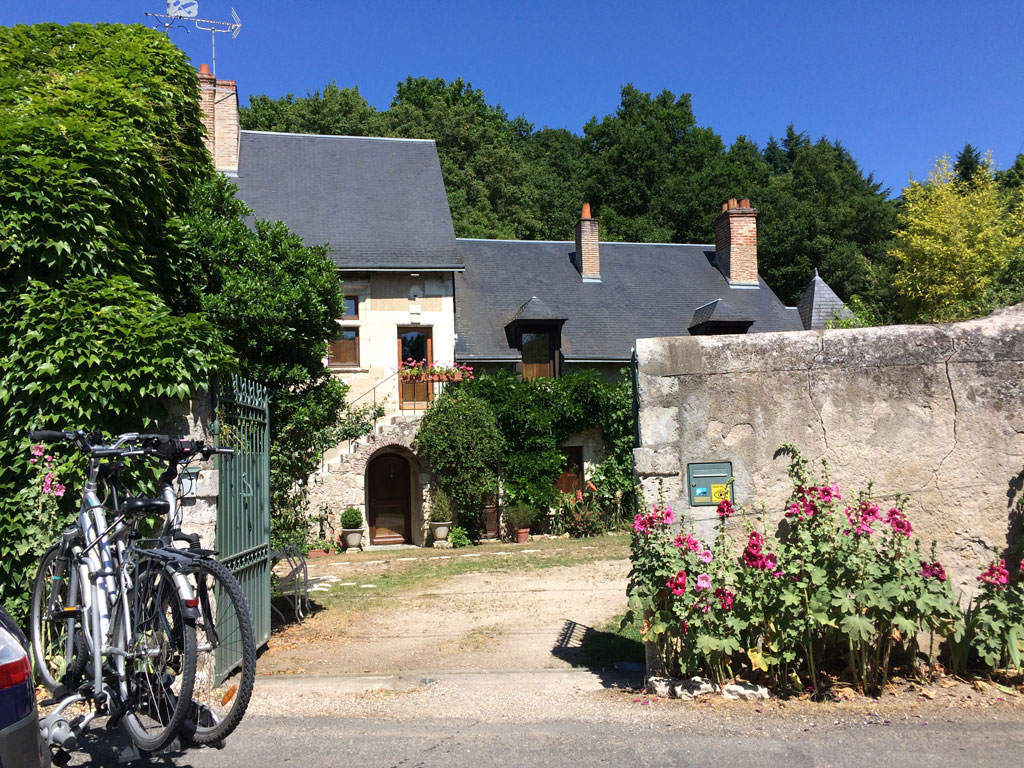 It’s midday by the time we leave and I’ve packed a picnic so we won’t waste too much time. We stop at the tourist office in Luçon, the closest town to our destination, to get some brochures and buy bike maps. It has an amusing floral arrangement in front with a 40-year-old vine and a vine-covered man. 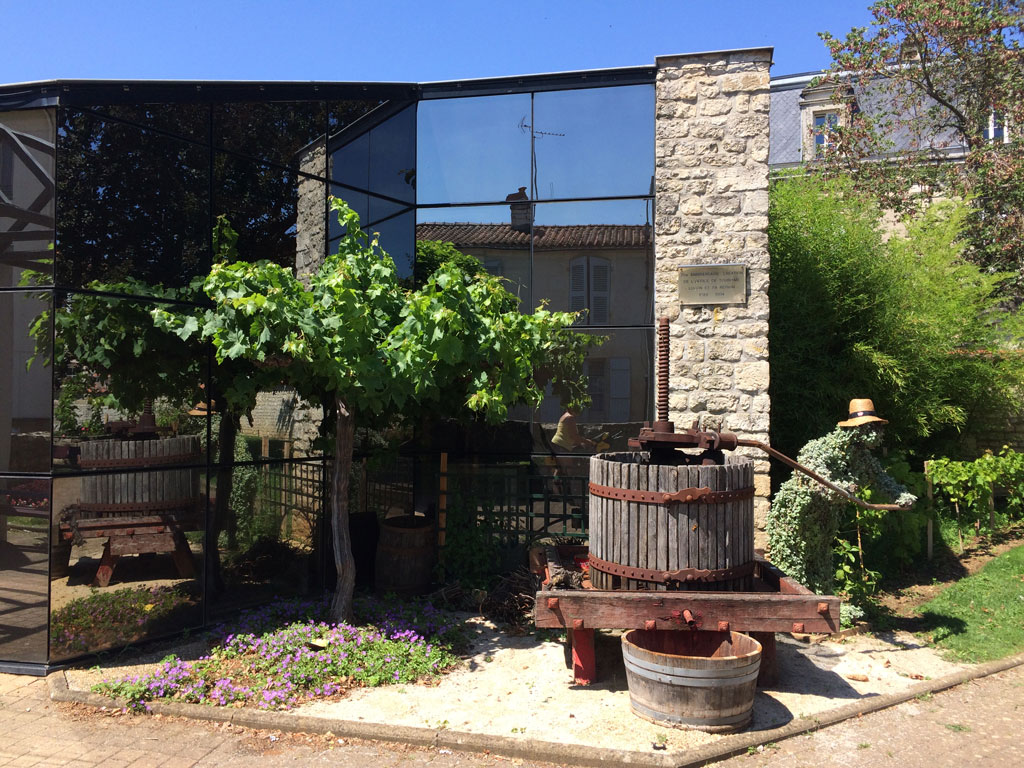 It’s about 4.30 pm when we arrive at our B&B, Château de l’Abbaye de Moreilles. Just so you know where we are, Poitevin Marsh is on the Atlantic Coast, just north of La Rochelle and Ile-de-Ré. 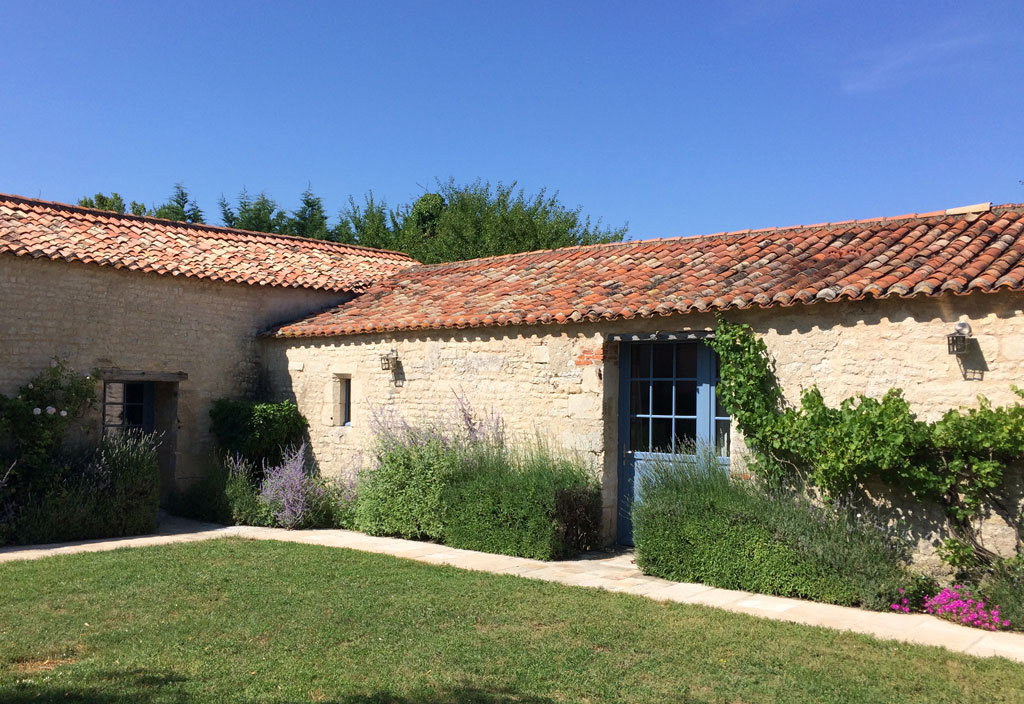 Our bedroom building at the B&B

We are greeted by the owner who turns out to be somewhat of a character. Our room turns out to be in a typical low stone building with blue shutters away from the main house, bordered by a hedge of lavander and with its own private garden. The beds and pillows are very comfortable and we have everything we need except a hot water jug but that is so rare in France that I wasn’t expecting it. The swimming pool is right over the other side so it is very peaceful. 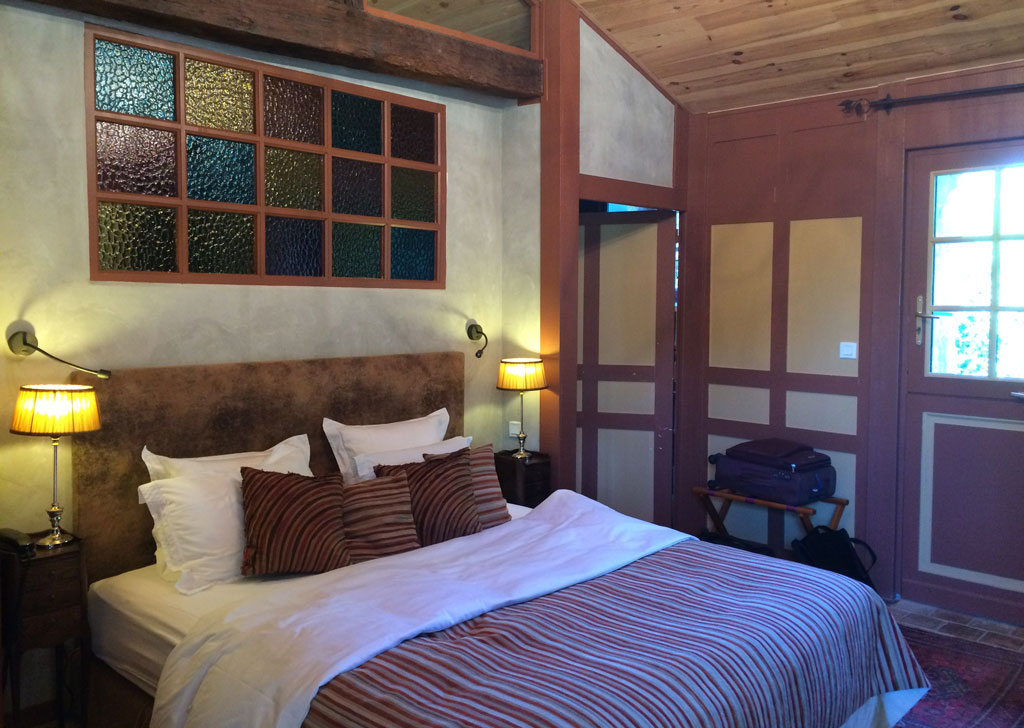 Our bedroom at the B&B

We check the bike maps and set out for Saint-Michel-en-l’Herm, 20 K away so that we can cycle to L’Aiguillon-sur-Mer to have oysters for dinner (a round trip of 30 K). We park at the church as usual and have a moment of panic when Jean Michel discovers that he can’t unscrew the attachment that holds my bike in place on the bike holder. Fortunately he has his tool kit and together we manage to get it off. Phew … 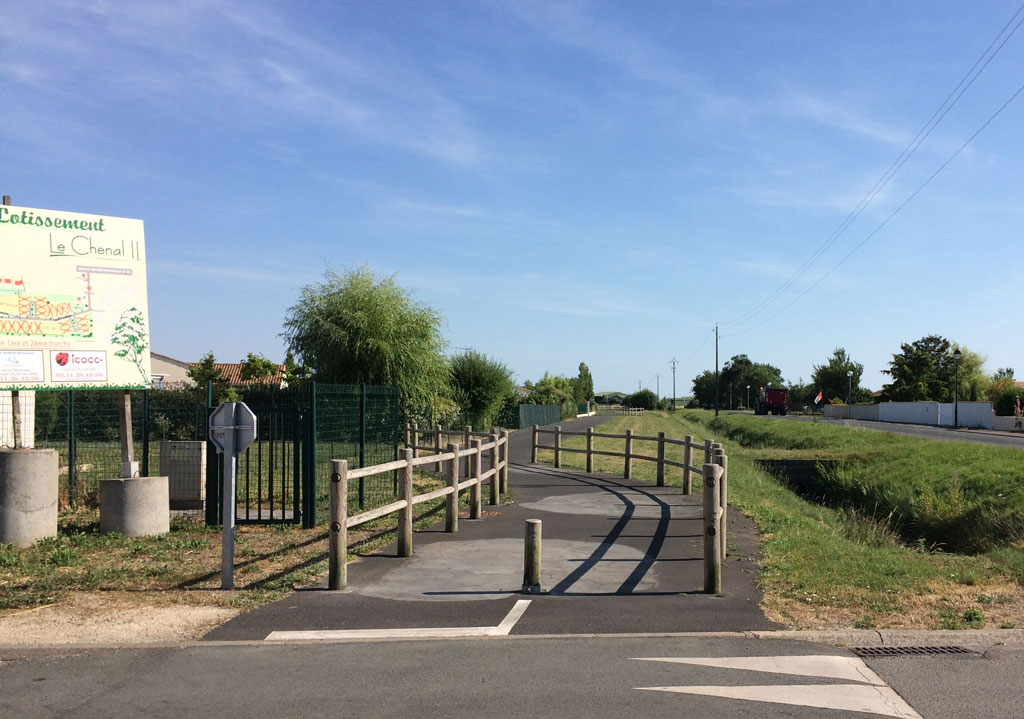 The luxurious bike path that only lasts 2 or 3 K

It proves to be a little difficult to find the bike route but I eventually spy a somewhat luxurious path and we follow it for the next couple of kilometres. After that, we’re on a secondary road. 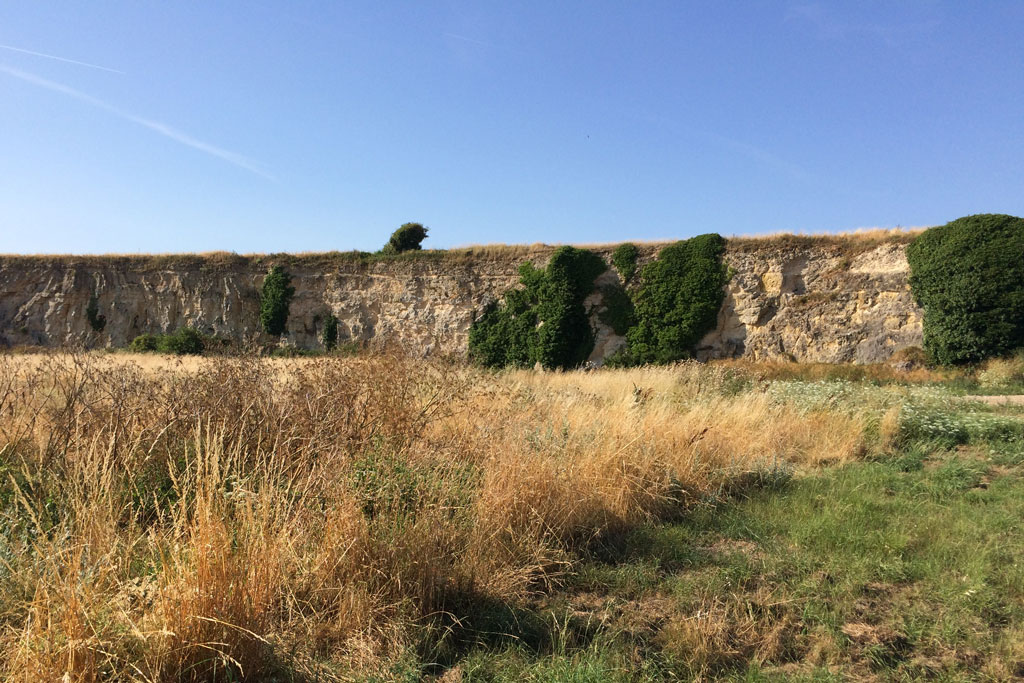 The inland cliff arising out of nowhere

The countryside is somewhat desolate and very windy. We are surprised to see what looks like an inland cliff face rising out of nowhere. We later learn that nearly the whole marsh was once the sea which has gradually withdrawn over the centuries, with a little help from the local population especially the monks. 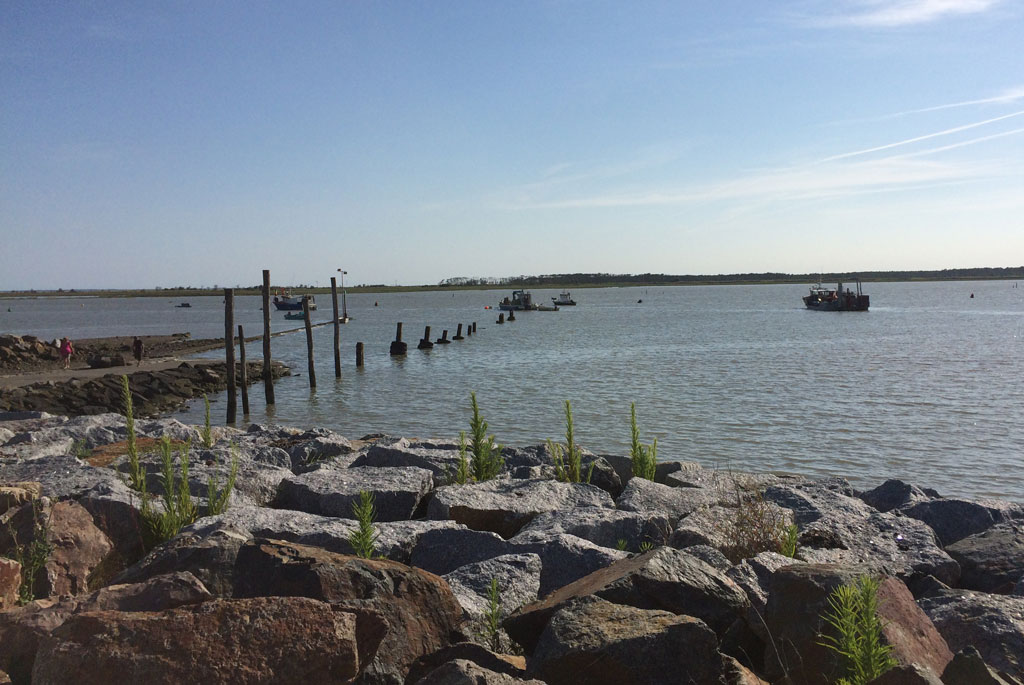 To the left, you can just see the bridge between La Rochelle and Ile-de-Ré.

We eventually reach a dyke along the sea. As we get closer to L’Aiguillon, we have a view a far as the bridge between La Rochelle and Ile-de-Ré. 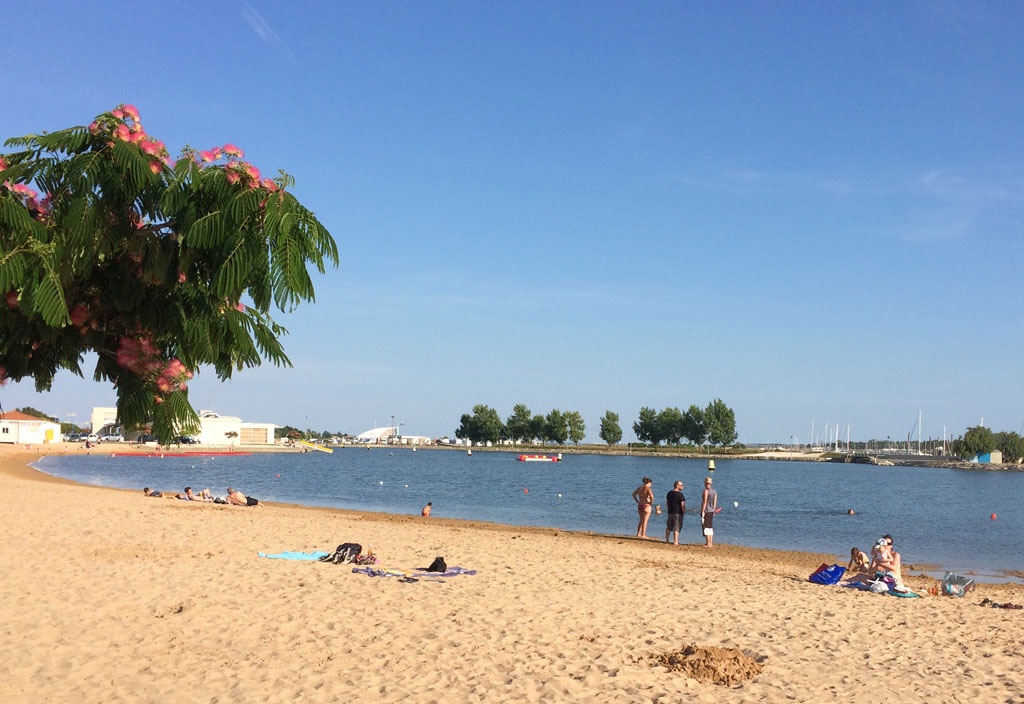 The beach at L’Aiguillon sur Mer

L’Aiguillon-sur-Mer itself is a bit of a disappointment. We are expecting something a little more lively especially as the summer holidays have already started. We push on a few kilometers to La Faute-sur-Mer hoping to find more activity. We do, but it’s very much a working-class holiday spot full of garish takeaways and fast-food venues. 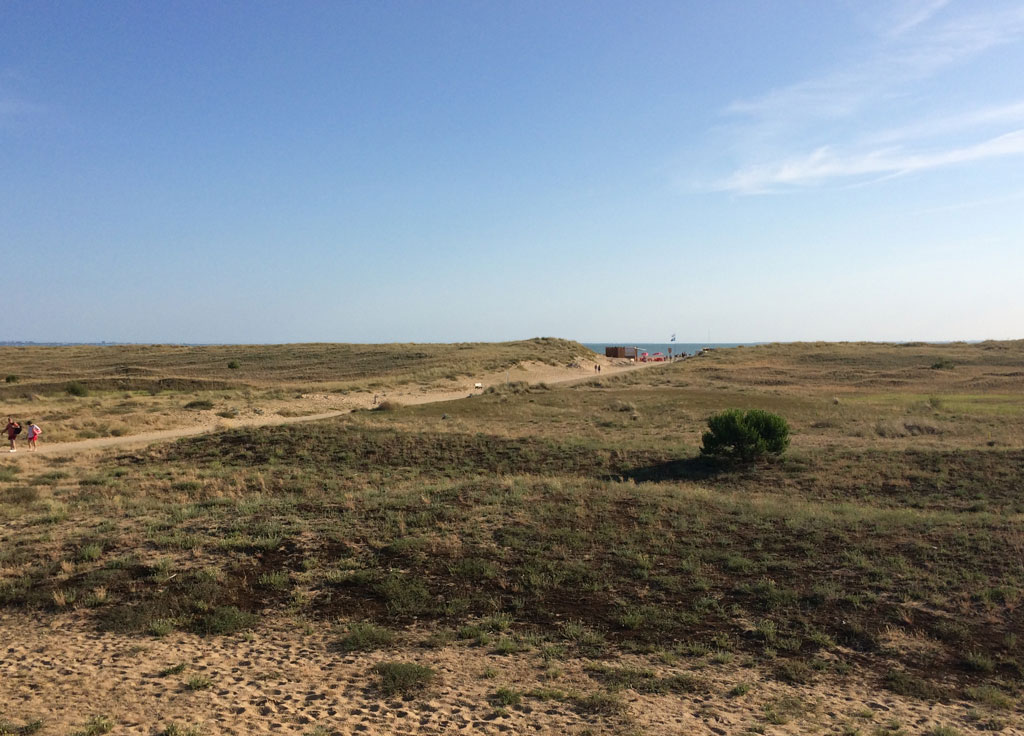 The path to the beach at La-Faute-sur-Mer

We don’t check out the beach at La Faute because it’s a long way from the bike route over a sandy path. On the footbridge, there are several people fishing with carrelets, square fishing nets. They don’t seem to be getting much but probably enough for dinner! 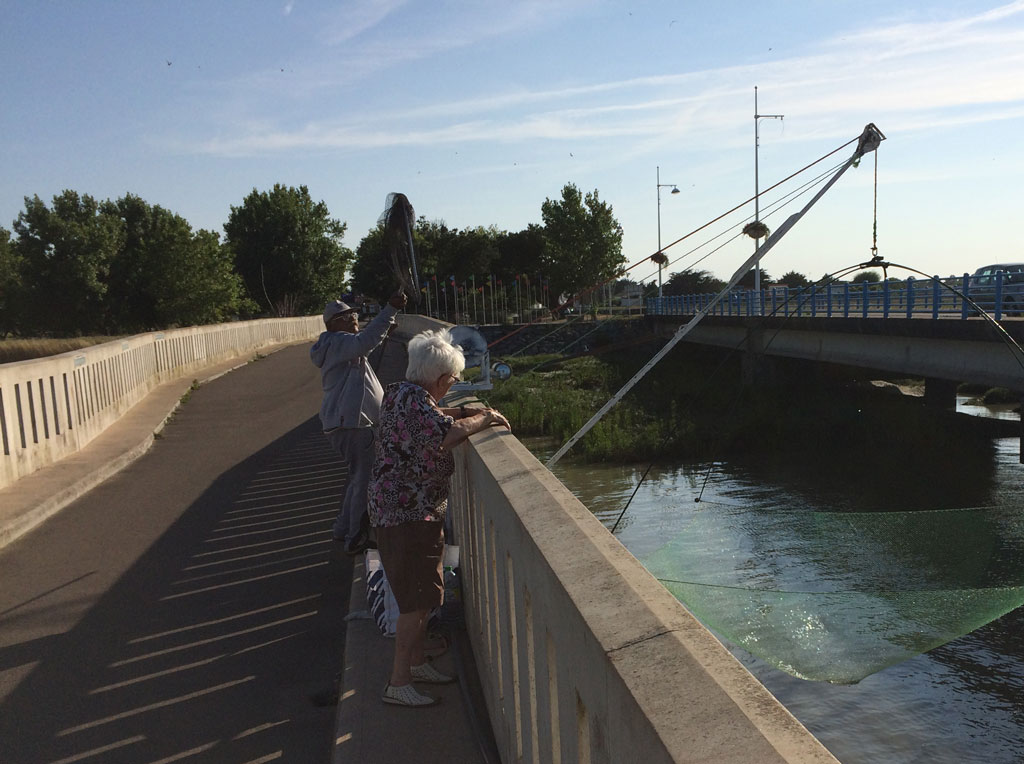 Fishing with square nets on the bridge

We go back to L’Aiguillon and check out the three restaurants. We decide on Julie dans la Cuisine overlooking the oyster beds. It’s 8.30 by then and apart from three young waitresses, there is not a soul in sight. I ask where all the people are. “It’s Monday”, they say, and sigh. “Well, we know we’ll get great service”, I replly. We choose a table out of the sun and open the windows to let in some fresh air. It’s about 30°C outside but there’s a cool breeze from the sea. 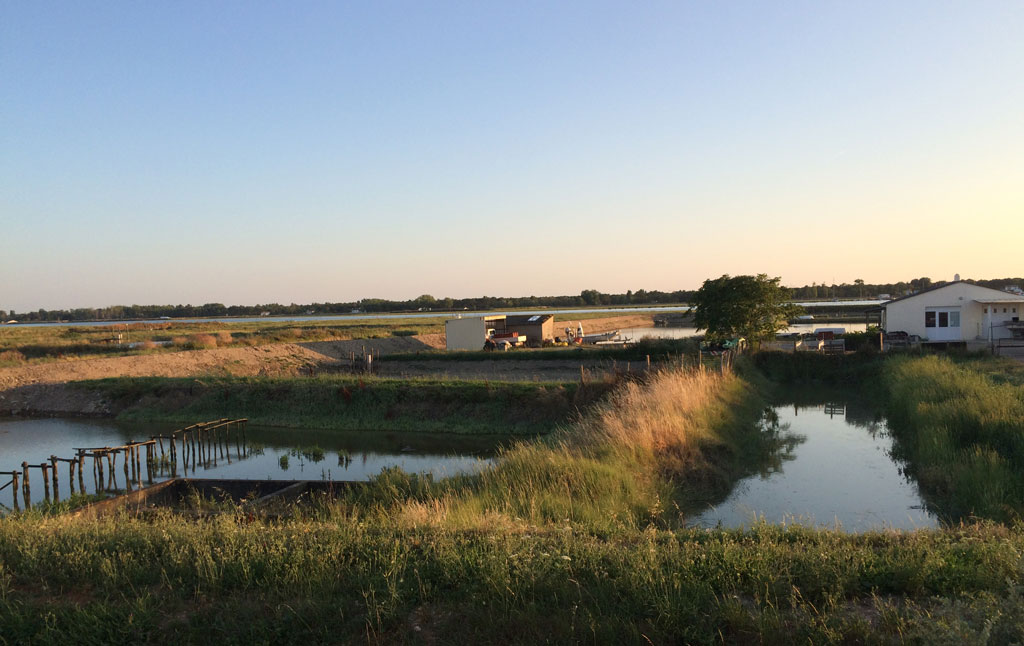 We order oysters (unfortunately they only have N° 3 which are quite small) and mussels and French fries, along with a glass of the local wine. We taste it and it appears to be a sauvignon. I ask the waitress but she says she doesn’t know what it is and brings the bottle back ! Sure enough, it’s a sauvignon. She’ll know for next time. 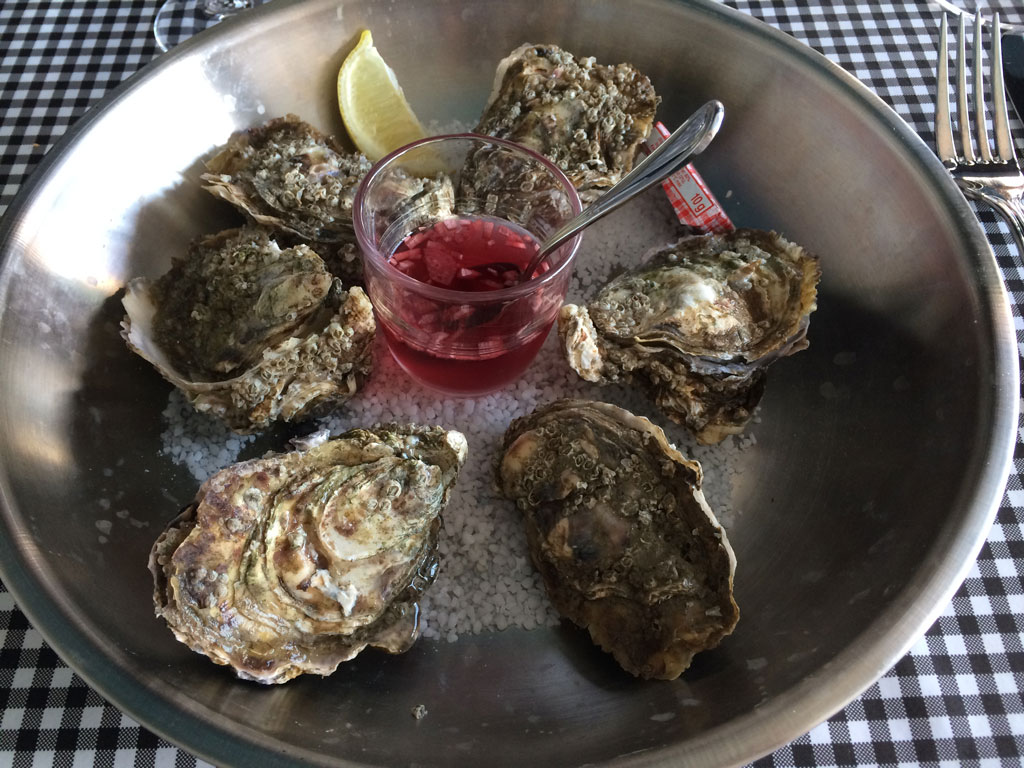 N°3 oysters on a bed of salt with typical vinegar and shallots sauce (which I don’t like!)

A group of three adults, 2 children and a baby arrive and they are the only other patrons in a restaurant that can probably seat over a hundred people. The season does not seem to be off to a good start. Despite their size, the oysters are tasty but a couple of them have a brownish liquid. I ask why and the waitress goes off to see the chef. It’s because they haven’t been through the oyster beds. Hmm. I hope this isn’t going to be a problem. 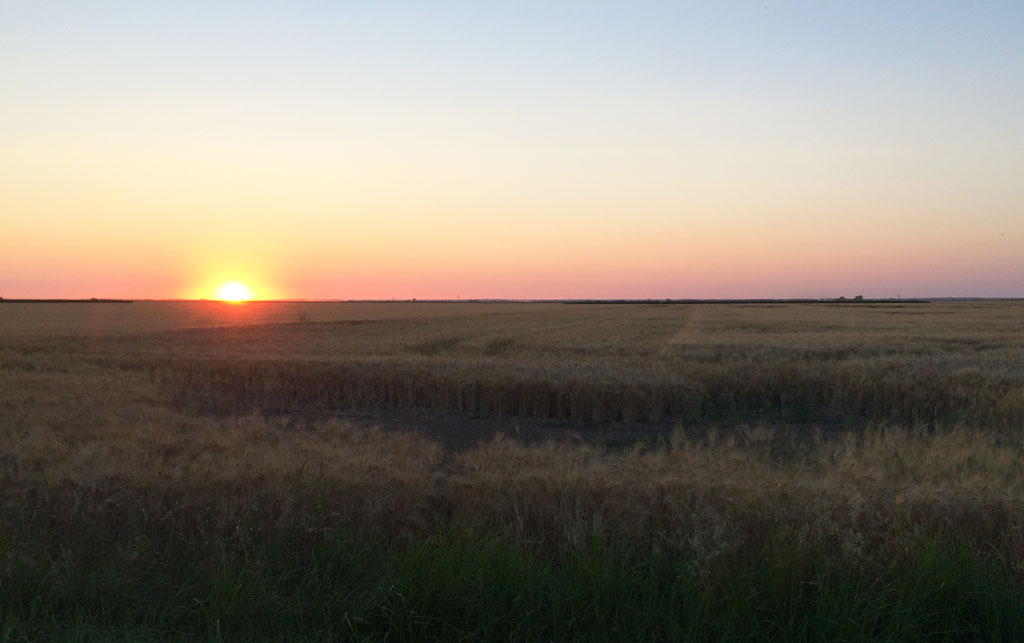 Sunset over the dry marshland

By then it’s nearly 9.20 and we still have to cycle 12 km back to the car. We just make it before the sun starts to set. The long twilight, of course, is why we usually take our holidays in June and July. Tomorrow we’ll head further east to the wet marshlands. See you then!