Cycling in the Poitevin Marsh #2 – The Wet Marsh

We wake up rested in our B&B and have a delicious breakfast in the courtyard in front of the main house, consisting of freshly-squeezed orange juice, two types of bread, two types of brioche (a sort of bun loaf), a mini-raisin roll, a slice of raisin bread, 5 types of jam, a soft-boiled egg and a yoghurt.  We won’t be having an early lunch … 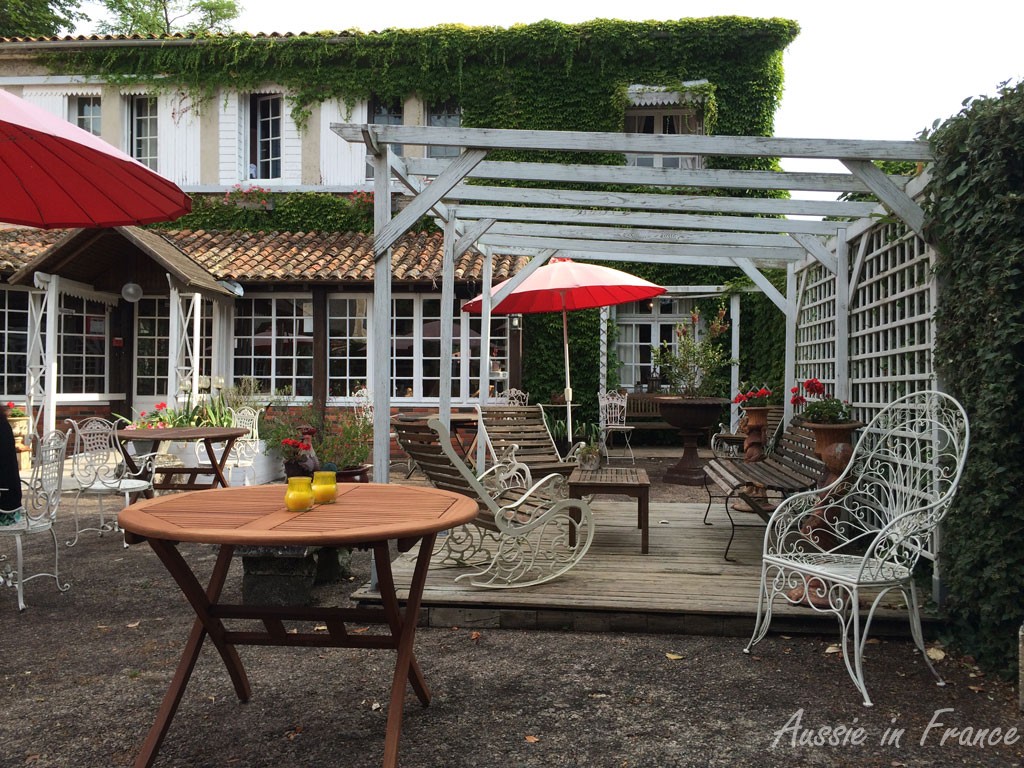 Breakfast in the couryard

Our starting point for the day is a few kilometres west of Maillé at Vix Bridge, on the edge of the “wet” marsh as opposed to yesterday’s “dry” march. The main waterway is the Sèvre Niortaise River but the whole area is riddled with little canals and bridges. It’s midday by the time we get on our bikes. 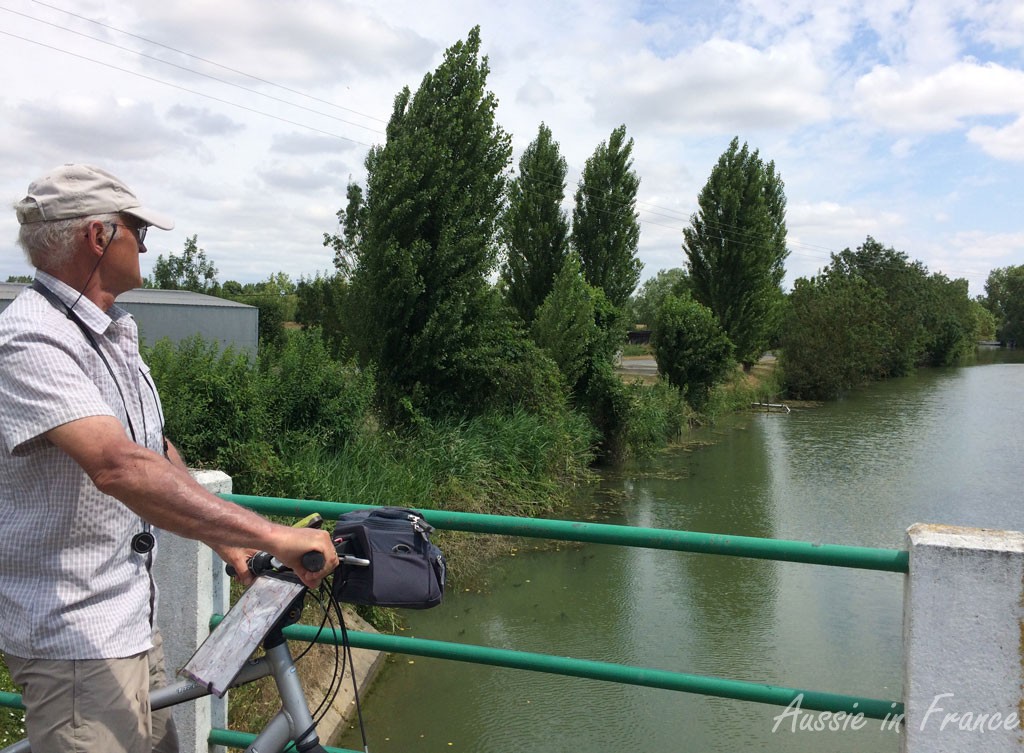 Jean Michel on a bridge over one of the canals

The ride is pleasant, along a canal, with trees on either side. No wind although there isn’t a lot of sun. My weather app says it won’t rain so we haven’t brought our capes. We come to the little town of Maillé with its port and posters made from old postcards showing life in the town in days gone by. 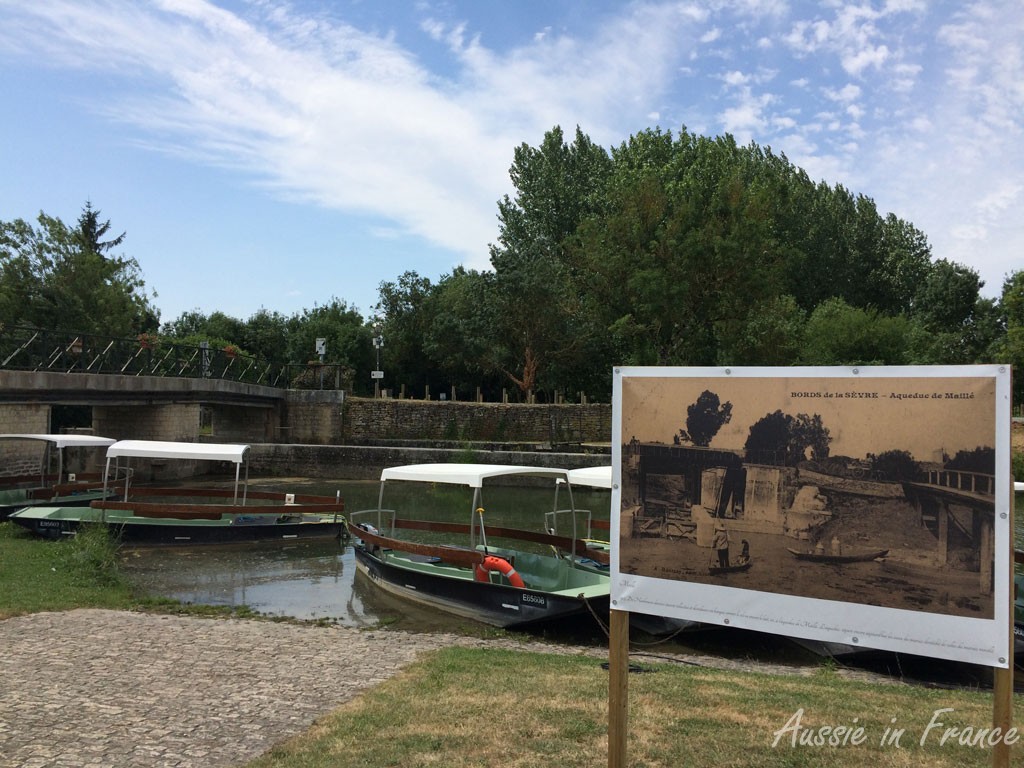 Old postcards made into posters in Maillé

We go past an unusual pump room obviously an addition to the house, with the pump wheel outside. 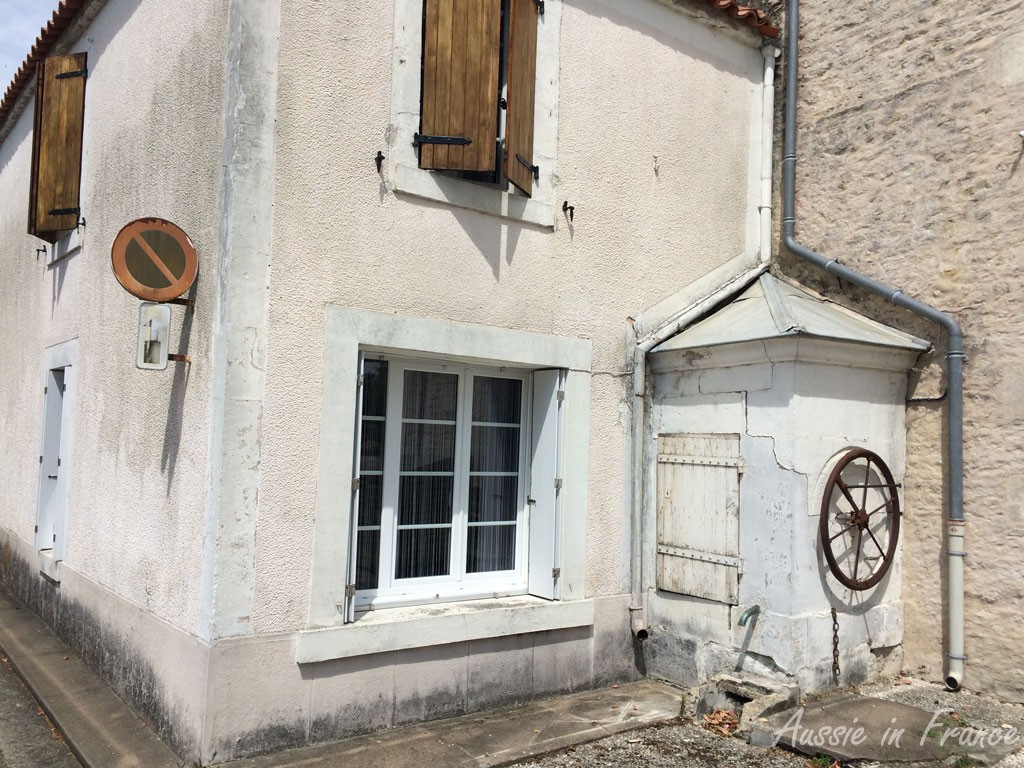 As we approach Maillezais after cycling past more canals we are impressed by the enormous cathedral ruins looming towards us. It’s the sort of view you only get on a bike. 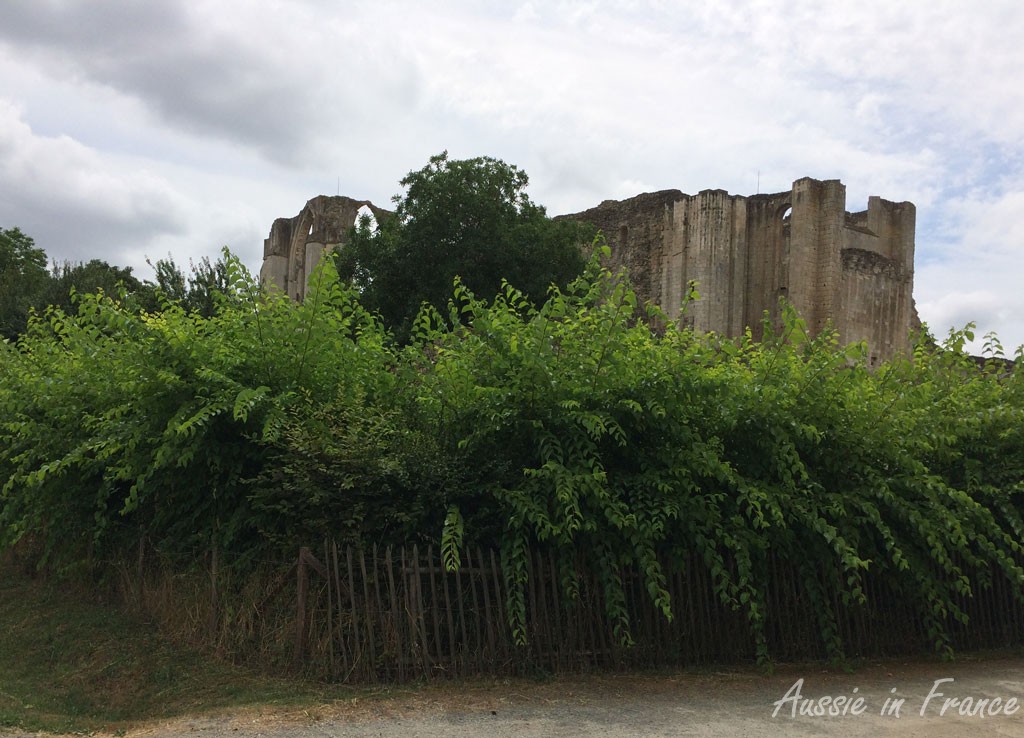 The looming ruins of Maillezais cathedral

By this time, Jean Michel has started to get hungry so we find a table on the shady terrace of the Auberge de l’Abbaye. Not that we really need shade – the sky is looking increasingly ominous and I’m beginning to regret the capes. 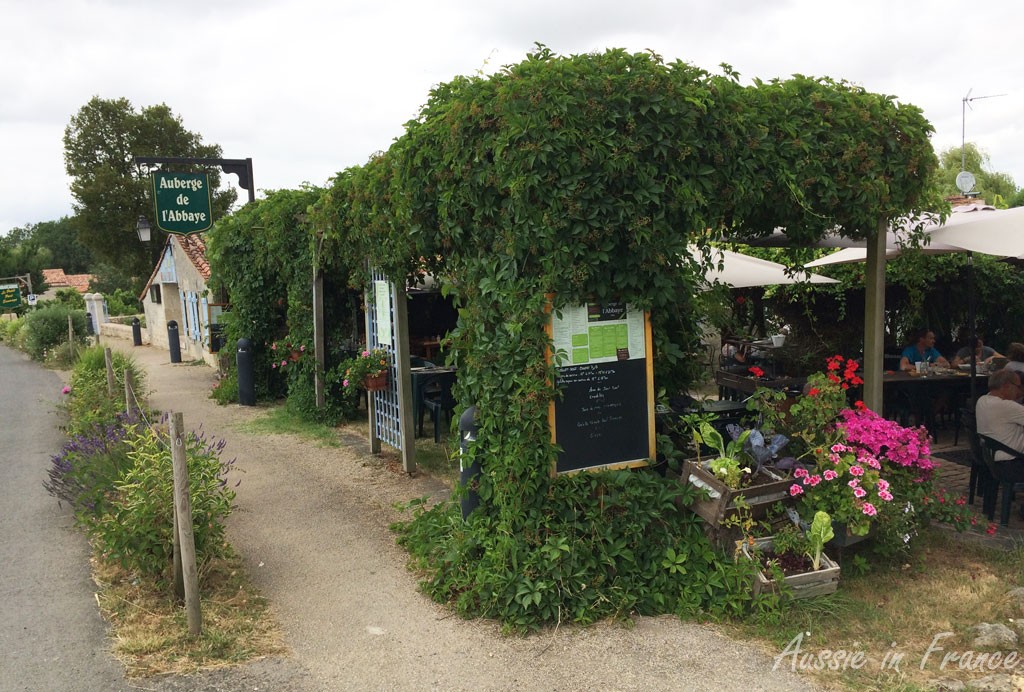 We order a salad including a local speciality called a farci which is a sort of flan made of eggs, sorrel, spinach and other vegetarian ingredients. I rather like it but Jean Michel is not that keen. 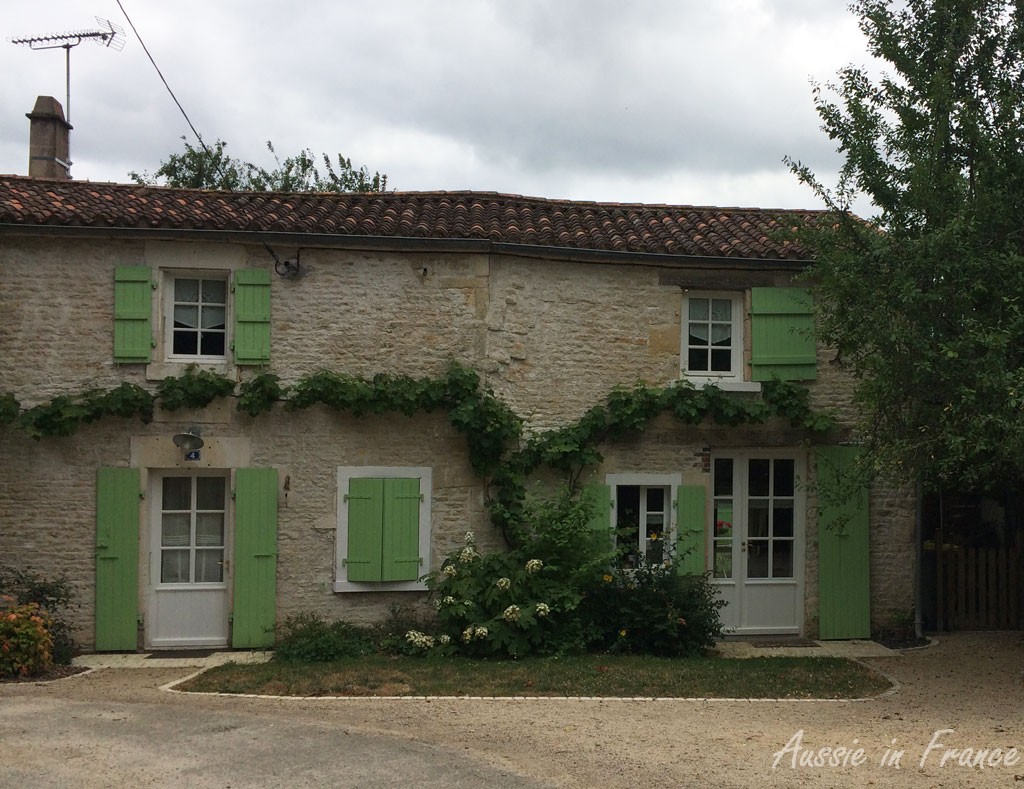 The next village is Liez with its typical Romanesque church and stone houses with painted shutters. 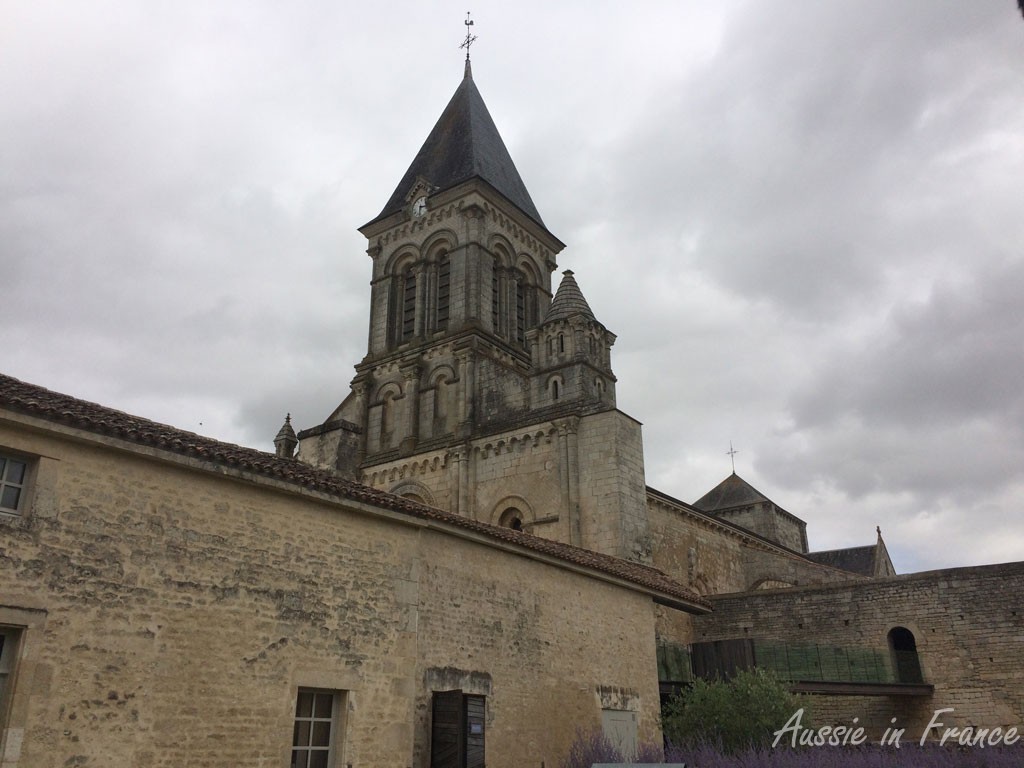 The church spire at Neuil Abbey seen from the mediaeval garden

We arrive at our destination of Neuil-sur-l’Autise where we visit the local abbey built in 1068, in much better condition than Maillezais but not as impressive. 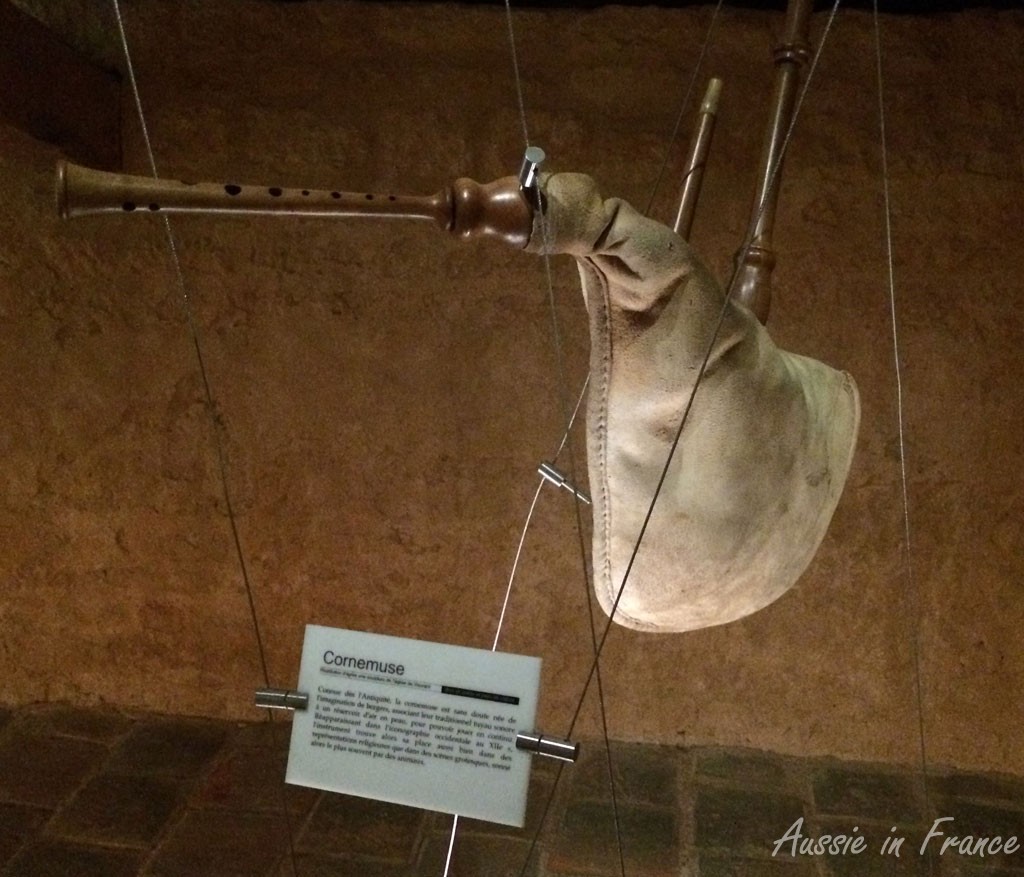 Mediaeval bagpipes which start playing as you approach. The only problem is that the previous instrument is still playing another tune …

This time, we visit the inside, but it is so full of interactive technology that it doesn’t even feel like an abbey. I don’t mind the Renaissance musical instrument display though. 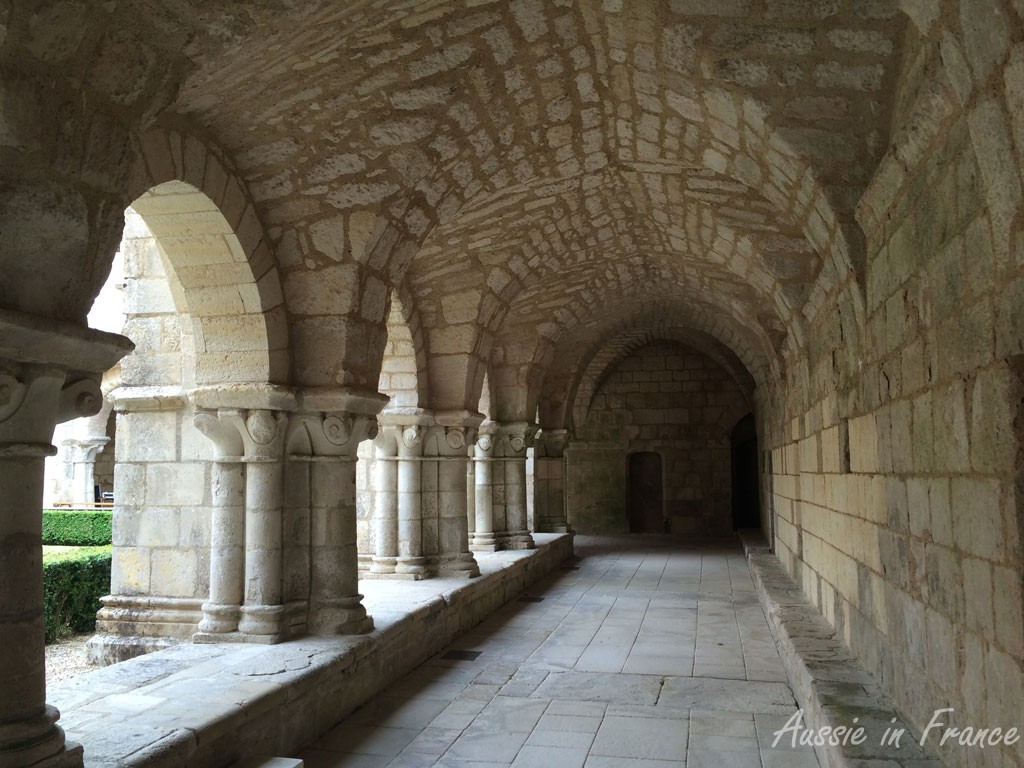 Even the cloisters are being overtaken with sound equipment for a concert, I presume. I manage to take one photo though and I love the capitals! 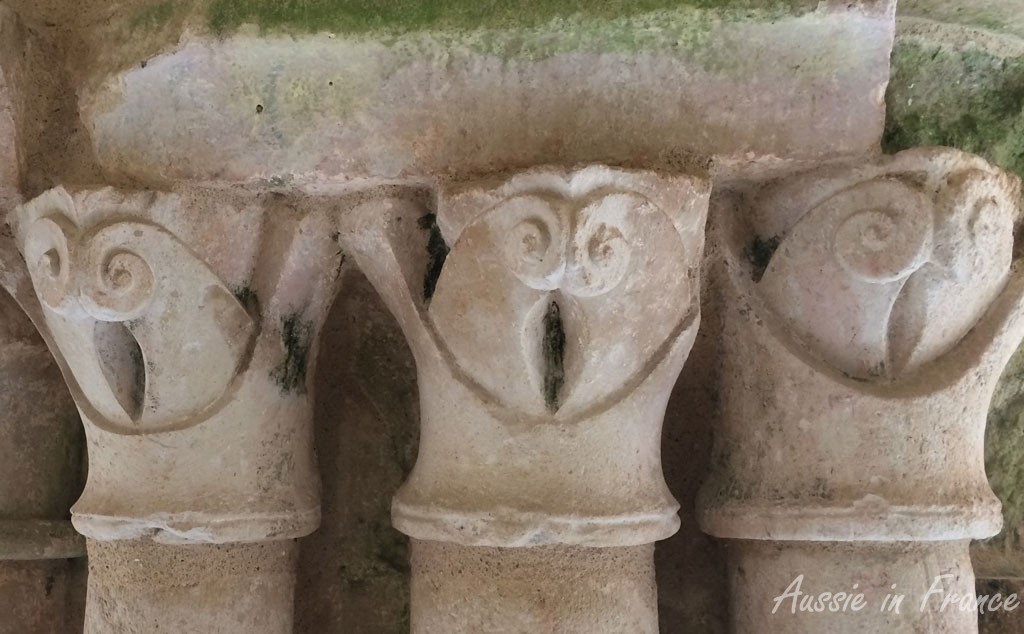 The very amusing capitals in the cloisters

There is mediaeval herb garden and we take the opportunity to ask one of the ticket sellers if he knows what the plants are. He is extremely knowledgeable. We discover what an acanthus is. The leaves are often used for sculpted scrolls in churches. I put it on my list of plants to buy … 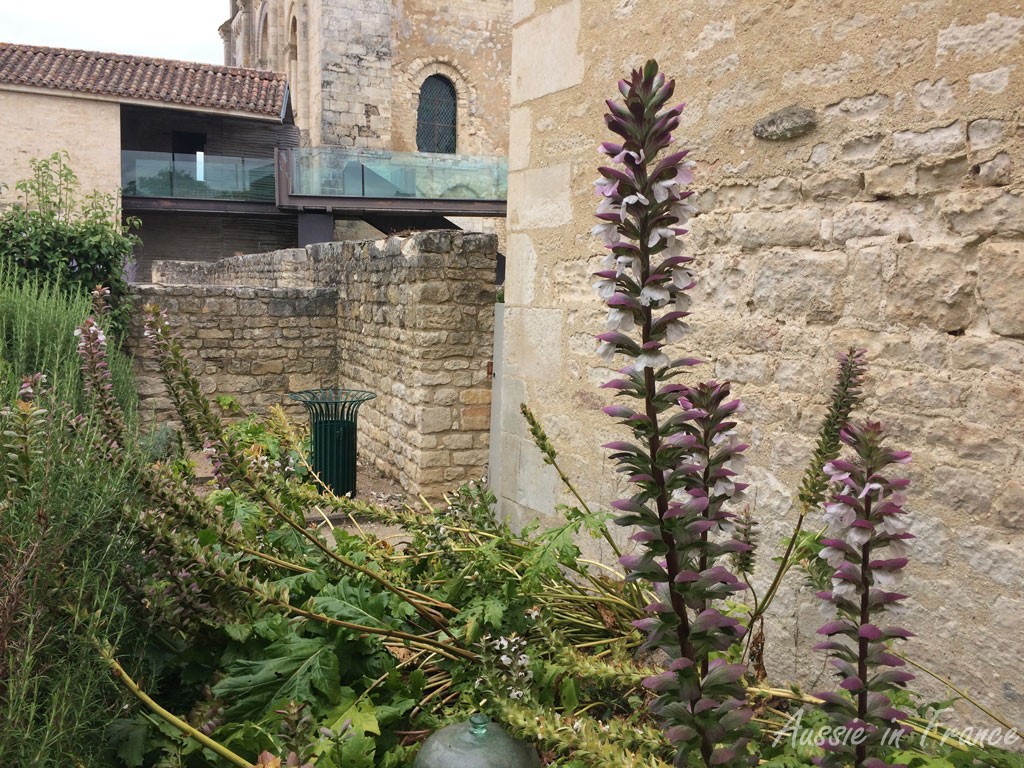 Acanthus flowers. You can just make out the leaves which seem to have suffered from some sort of disaster

We return along the path we came on but this time we go to St Sigismond, where we stop for a lukewarm coke, then Mazeau. It’s started spitting but not enough to really bother us and there is enough wind to dry us out as we go. We just hope it won’t get any worse. 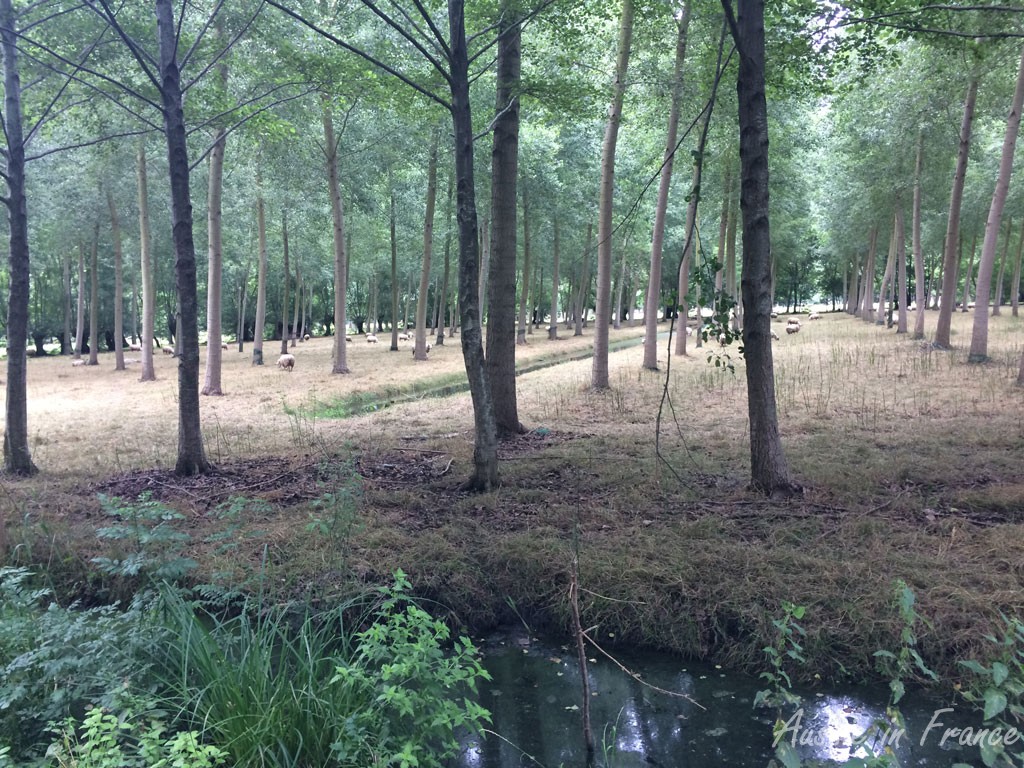 This must be the strangest sheep country I’ve ever seen!

The view is more or less the same, with the addition of a flock of sheep in a most unlikely forest of trees. 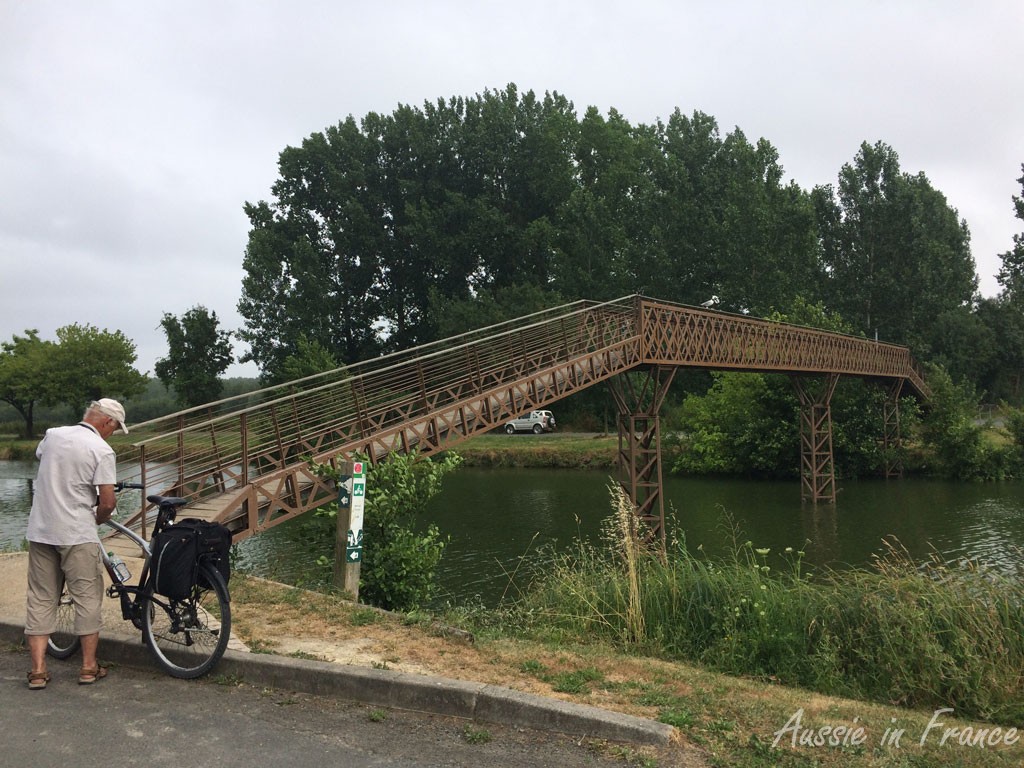 A bridge over a canal – but which canal?

We come out along a large canal with absolutely no idea where we are. Jean Michel rarely gets lost but the paths are so winding and there are so many canals that it’s not easy to find our way. 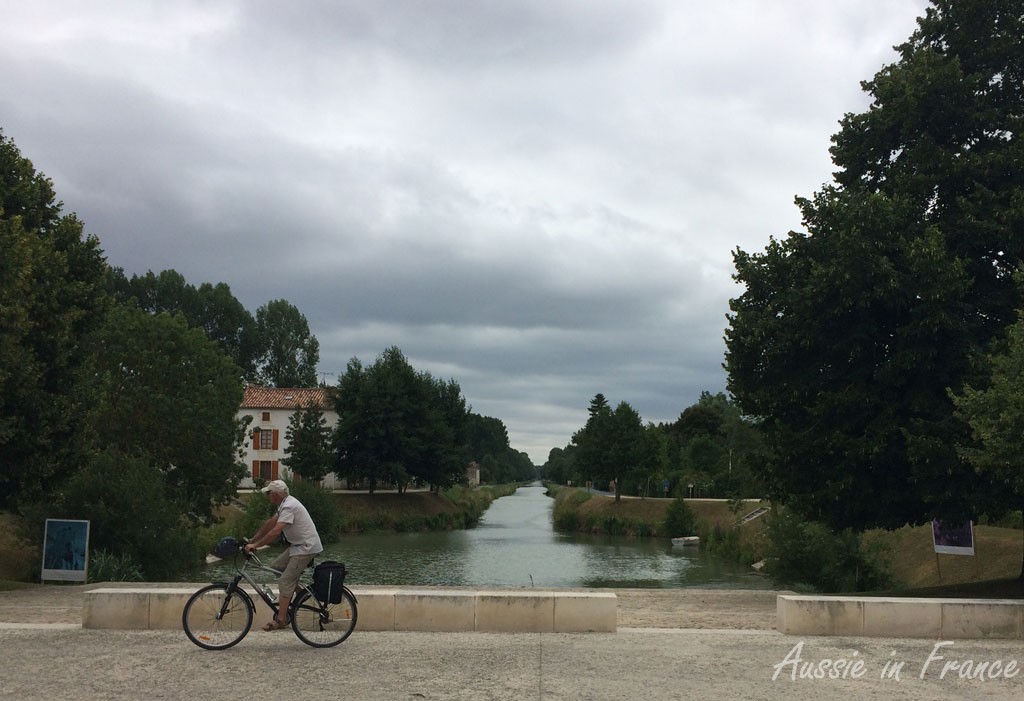 Crossing the canal in Oulmes

We’re not lost however and we eventually arrive in Damvix. By then, we have cycled 50 K and all I want is a cold drink. Since it’s 7 pm, we settle for a glass of local white accompanied by the music of a live pianist on the keyboards which I initially find aggressive but eventually enjoy. 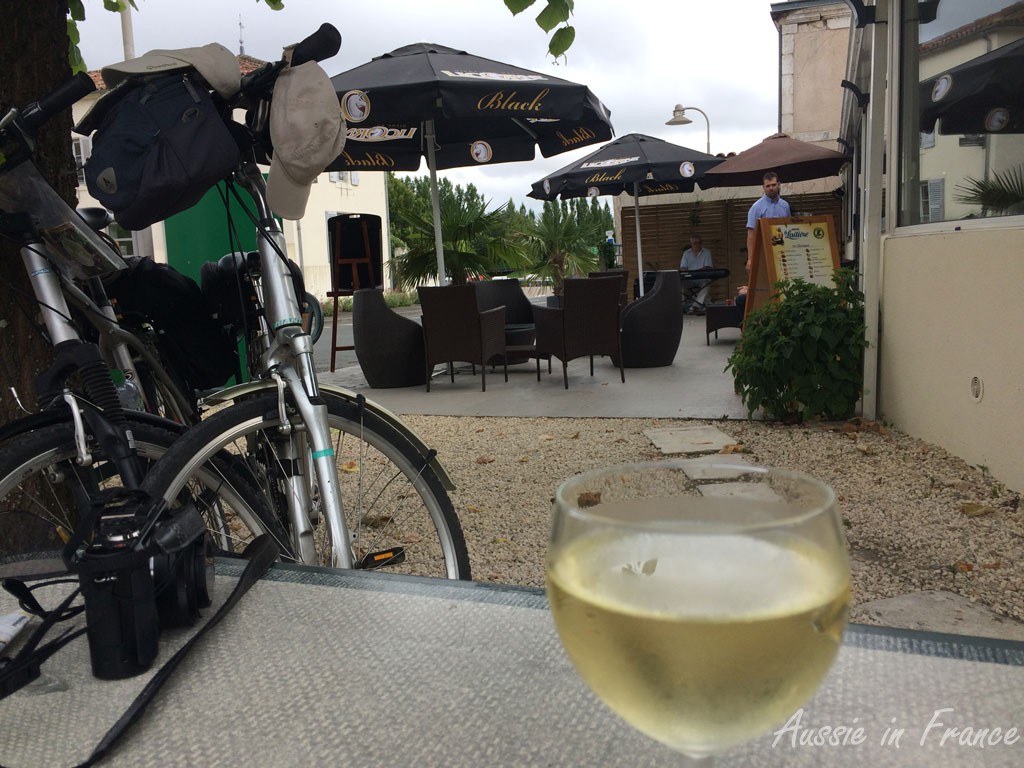 A much appreciated drink in Damvix after 52 K

Only another 10 K or so to go, according to Jean Michel. At least the rain has stopped. The path along the canal with its patches of waterlilies suddenly becomes very bumpy and we realise we’re on the wrong side.  We eventually find a bridge and cross over. 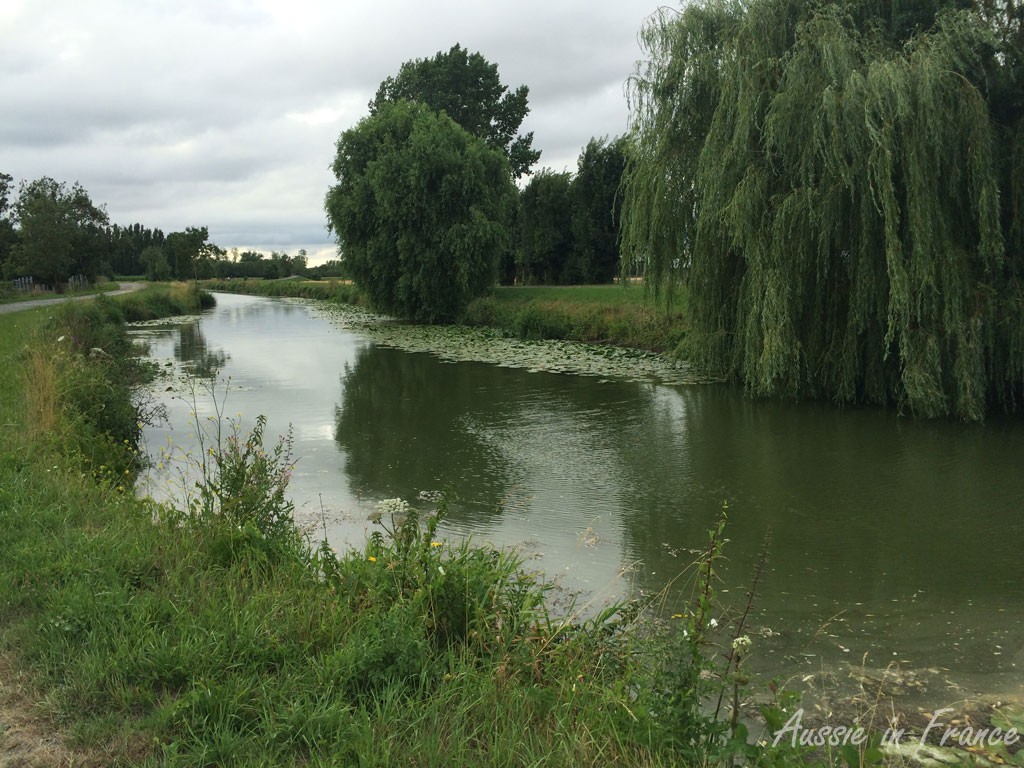 On the wrong side of the canal with its waterlilies

I notice a restaurant along the way called the Le Vieux Batelier (the old boatman). The name rings a bell but it’s not until we finally get back to the car, having clocked up 62 K, that I discover it’s the one I had seen in the tourist brochure. 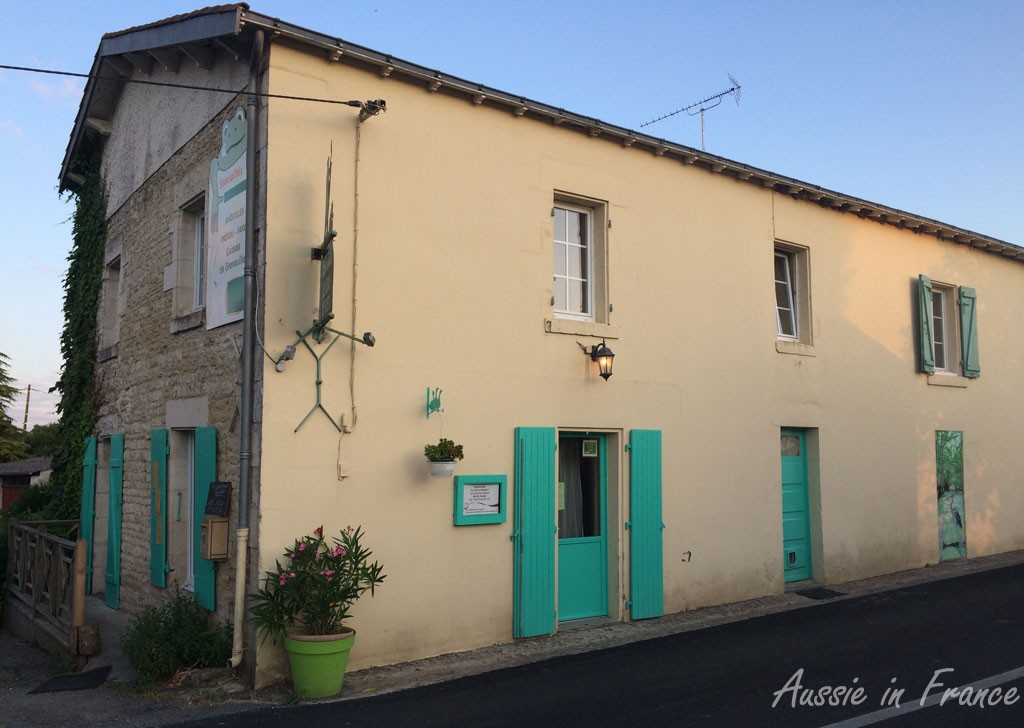 Not to worry. We drive back so we won’t have to worry about cycling after sunset. We have the deck overlooking the canal to ourselves. Business, once again, is very slow, we learn from the couple who run the restaurant. Maybe it will pick up after Bastille Day. We certainly hope so. 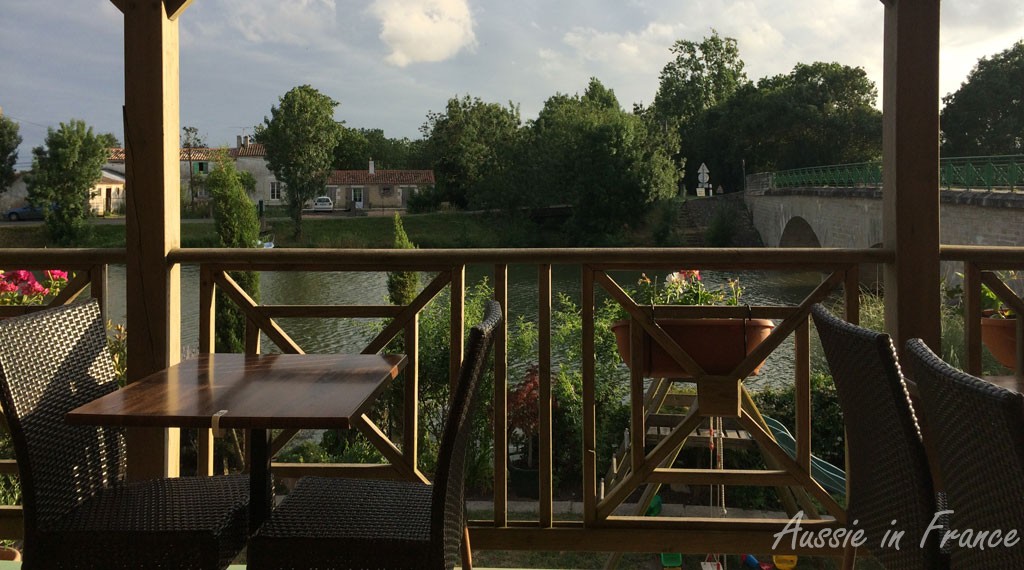 View of the canal from the deck of the restaurant

Jean Michel has one of the local specialities – eels (the other is frog’s legs) and I settle for an excellent entrecote. We drink the local Fiefs vendéens red with its unusual bottle. 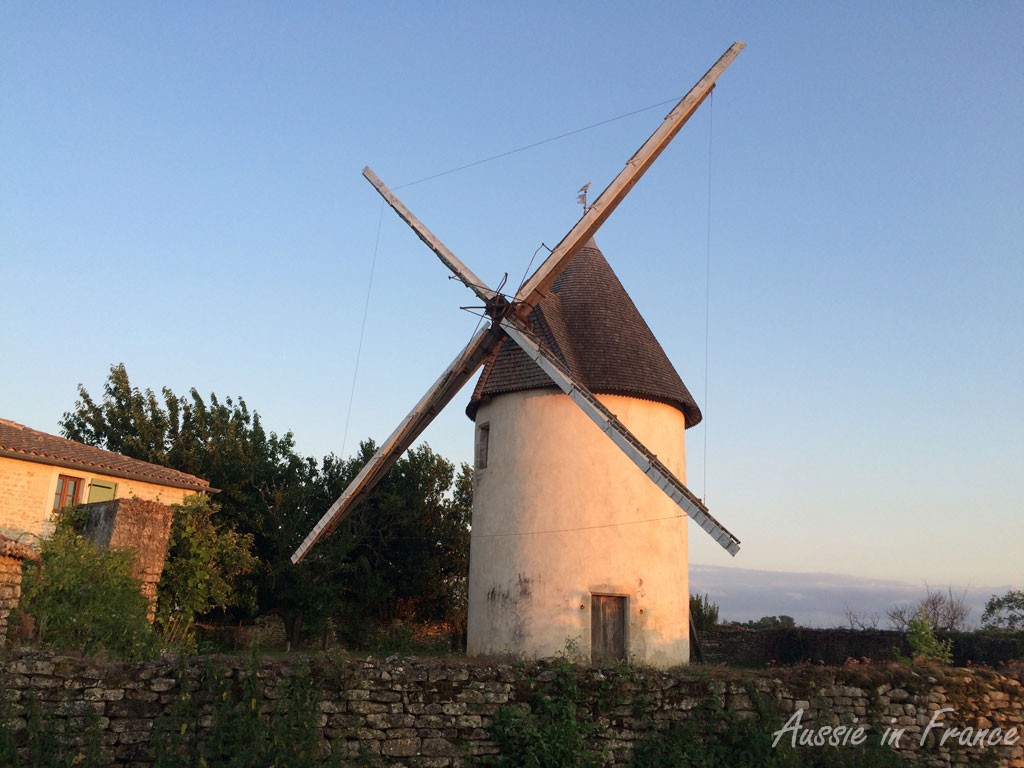 After dinner, we drive off into the sunset …