Cycling along the Cher from Montrichard to Saint Aignan

Sunday is cool and rainy so we have reserved our weekly cycling excursion for Monday which dawns bright and sunny. We are off by 10.30 am to Montrichard on the Cher River, about a half an hour’s drive from Blois, via Chaumont. We are going to get cycle maps at the tourist office. 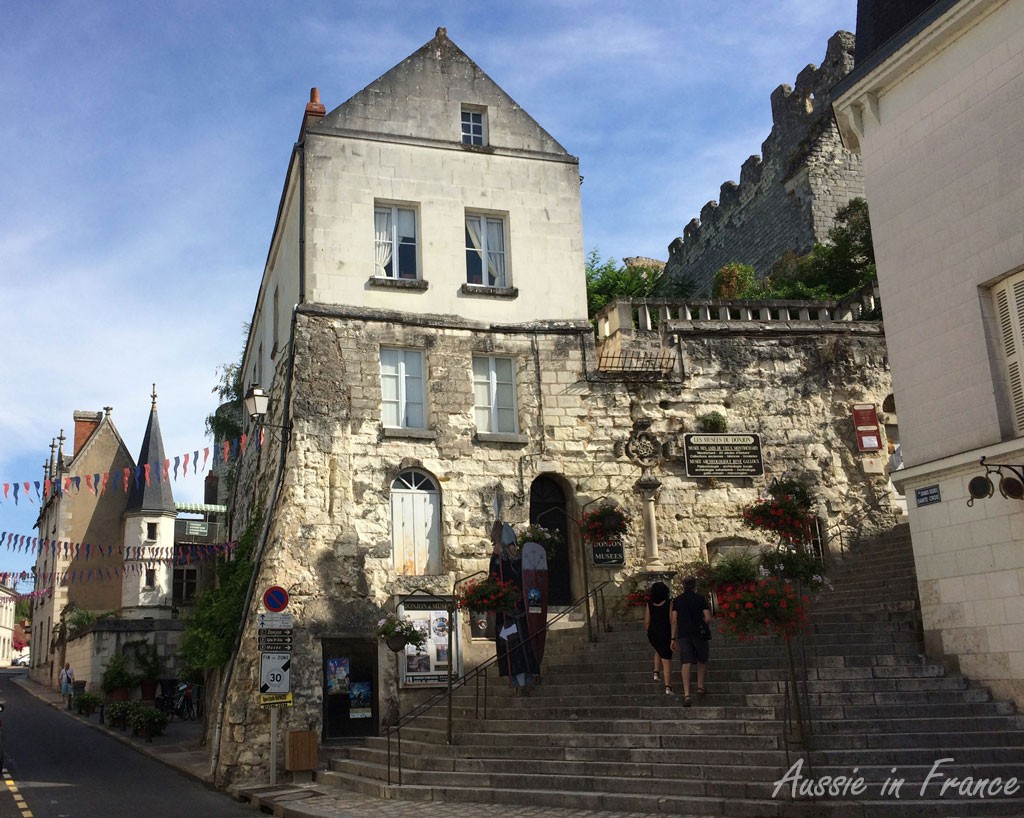 Montrichard castle from the main street leading to the tourist office

They don’t have any. That’s a disappointment but we have seen on the Internet that there is a cycle path to Thésée about halfway along the 20 K route. We find a parking lot near the river and set out. 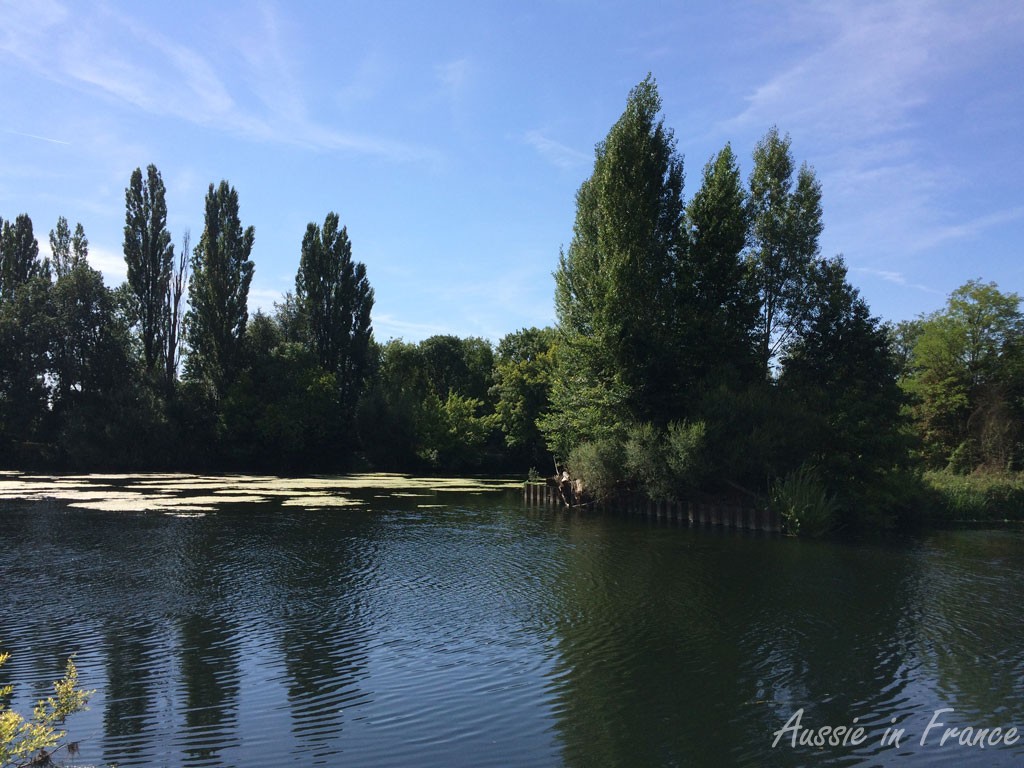 The Cher along the bike path leaving Montrichard

Initially the path is promising and we’re happy to be on our bikes again. The lack of maintenance, however, soon becomes obvious (read : the path is often rutted and you have to keep your eyes on the ground all the time). When you glance at the scenery, it’s quite bucolic, marred only by the smell of pollution caused by ever-increasing green algae. 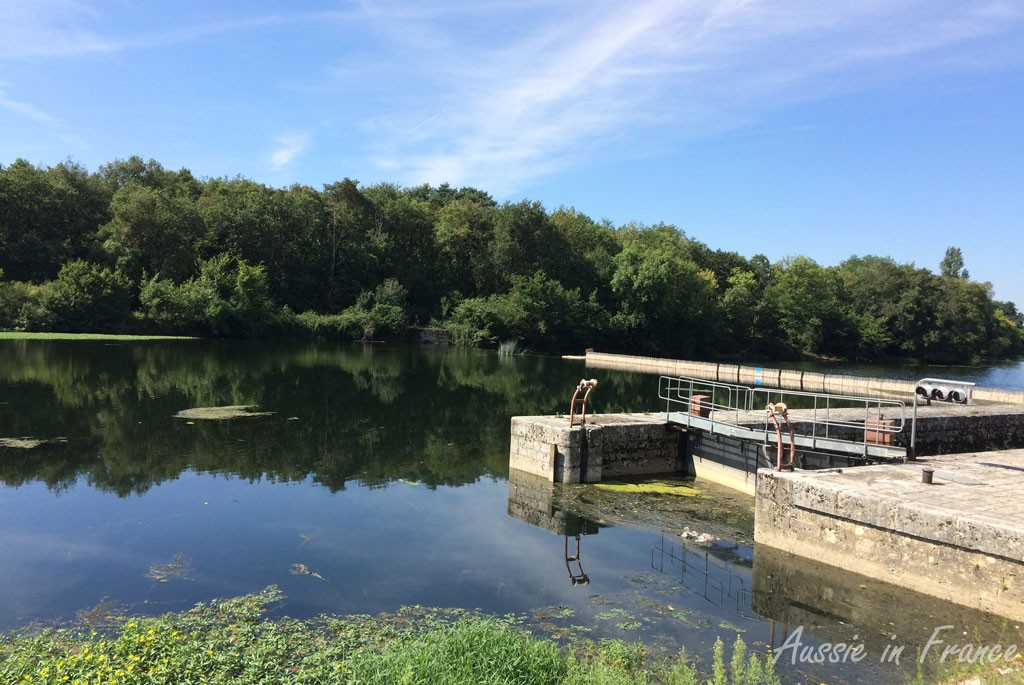 One of the many locks along the bike path

We go past several locks, all of which seem to be functioning and automatic. Most of the lock houses seem to be converted into holiday rentals. From time to time, I get off my bike and walk over a rough patch, rather than find myself face down on the gravel in front of me. “Don’t worry”, Jean Michel consoles me, “after we get to Thésée, there’s a real bike path.” 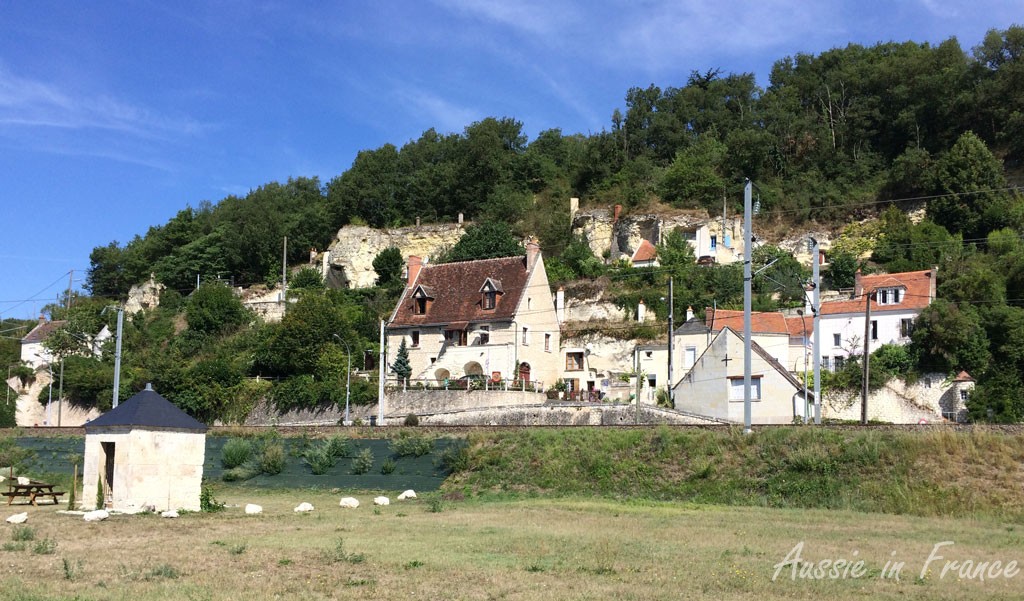 Troglodyte houses in the limestone cliffs

Well, yes, there is a sort of a bike path between the river and the railway line but the maintenance isn’t any better. On the other side, we can see many troglodyte houses built into the limestone cliffs, but it’s not really scenic. 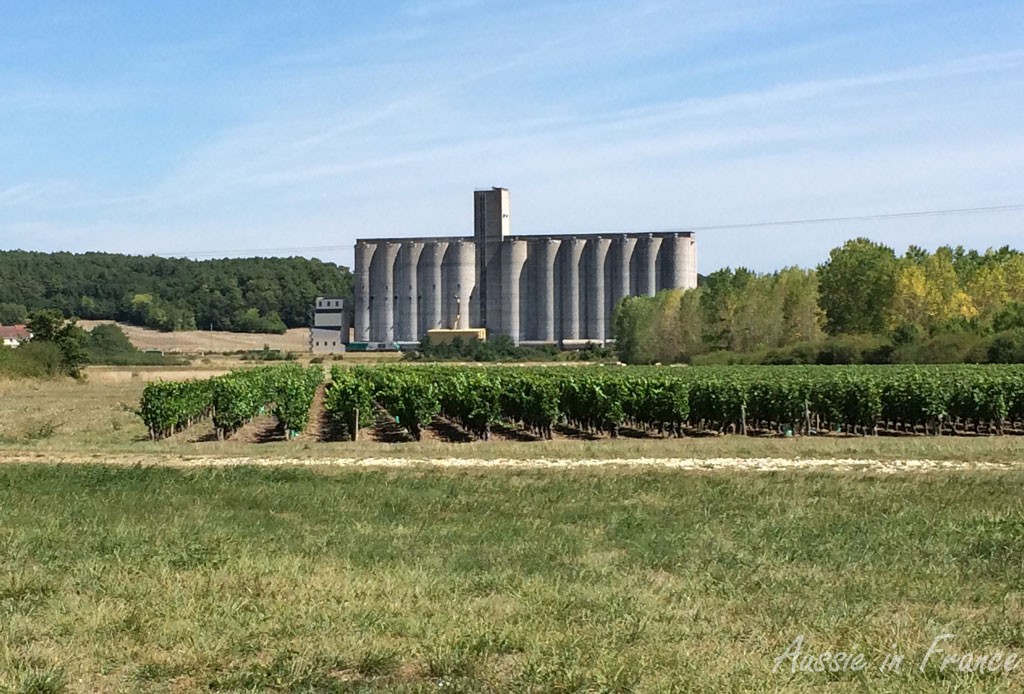 An enormous grain silo with a vineyard in front

Nor is the modern version of a cathedral, aka a grain silo. It even has a pseudo bell tower. 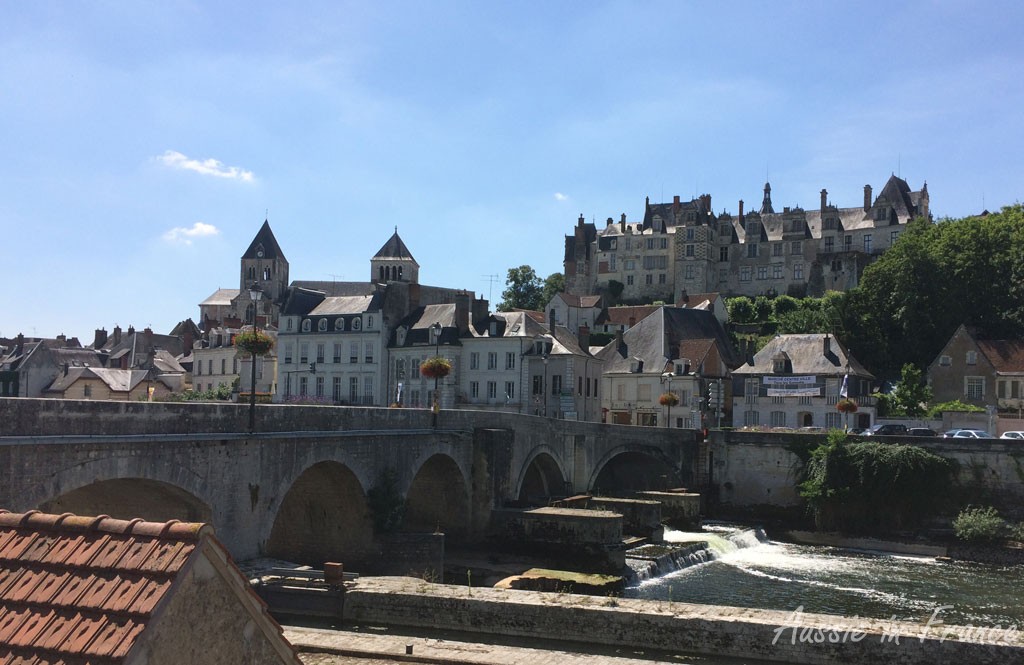 The approach to Saint Aignan with its château and collegiate church

The approach to Saint-Aignan-sur-Cher, however, which we’ve never visited, more than makes up for the mediocre ride. The château stands on the hill just opposite the bridge with the collegiate church to the left. 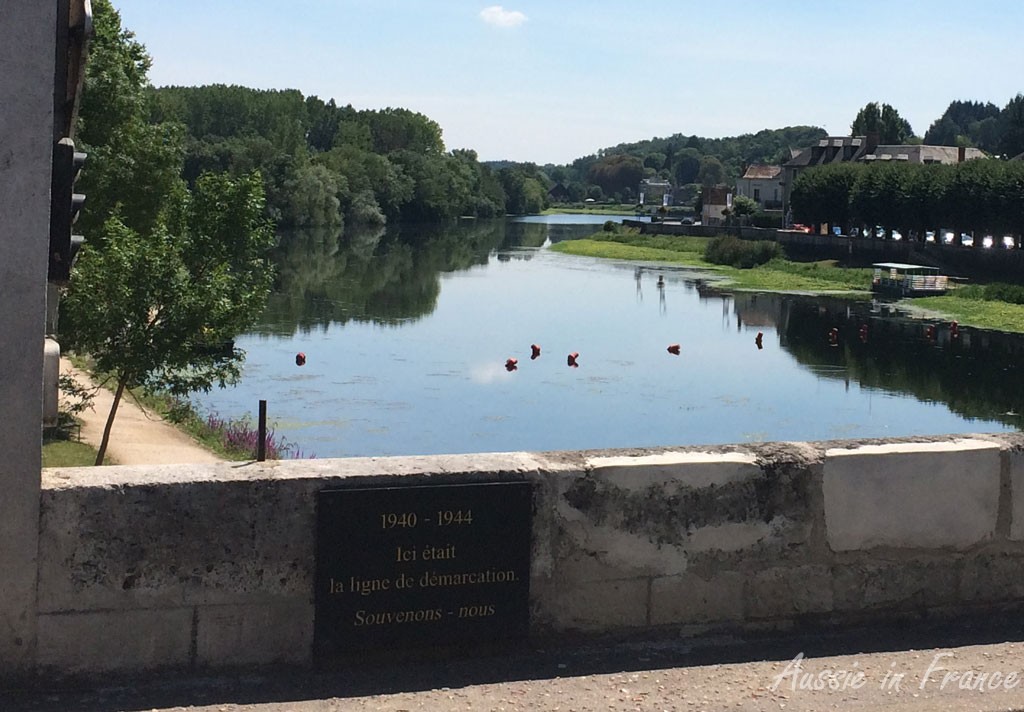 Jean Michel points out a sign on the bridge that says “1940-1944 Here was the line of demarcation. We will remember them.” 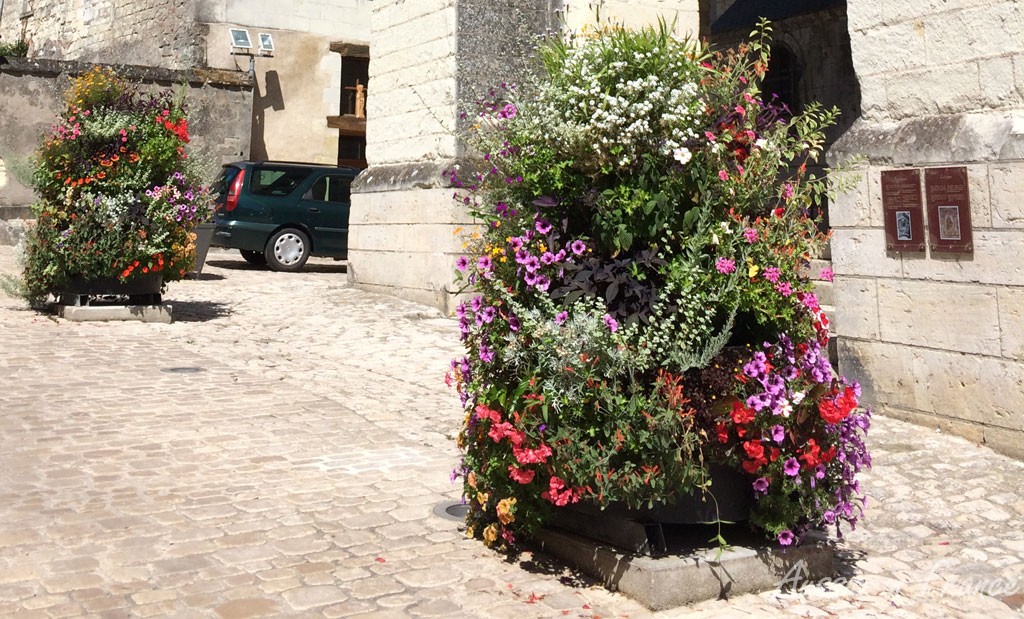 One of the many luxuriant flower pots in Saint Aignan

Now comes the important bit. Lunch. It’s 1.15 pm and it’s Monday (read : most restaurants in France, particularly in the provinces, are closed). Now my idea of a restaurant when we’re cycling is a pleasant, inexpensive, non-touristy-looking place, with shady trees over the outside tables and a direct view of the river. The sort they have in Germany all along the Danube. 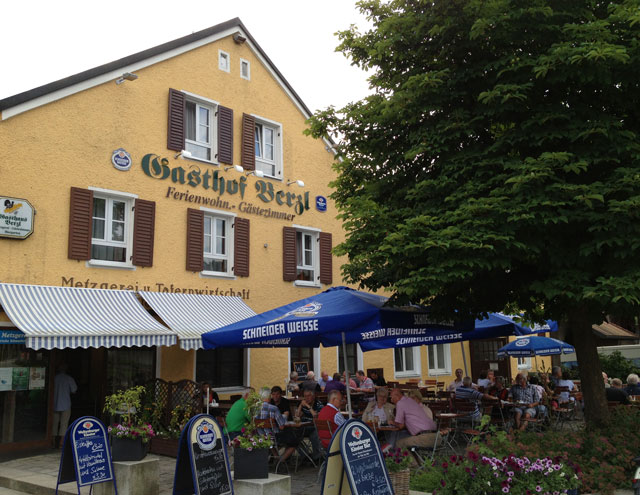 The only problem is that it seems to be a rare commodity in France. We cycle through the village and only discover a kebab place near the church and an indoor crêperie. We ride along the river in both directions and finally have to resign ourselves to coming back to L’Embarcadère which fronts onto the main road and doesn’t have a terrace.  However, with a four-course menu for 13 euro, it’s definitely inexpensive. 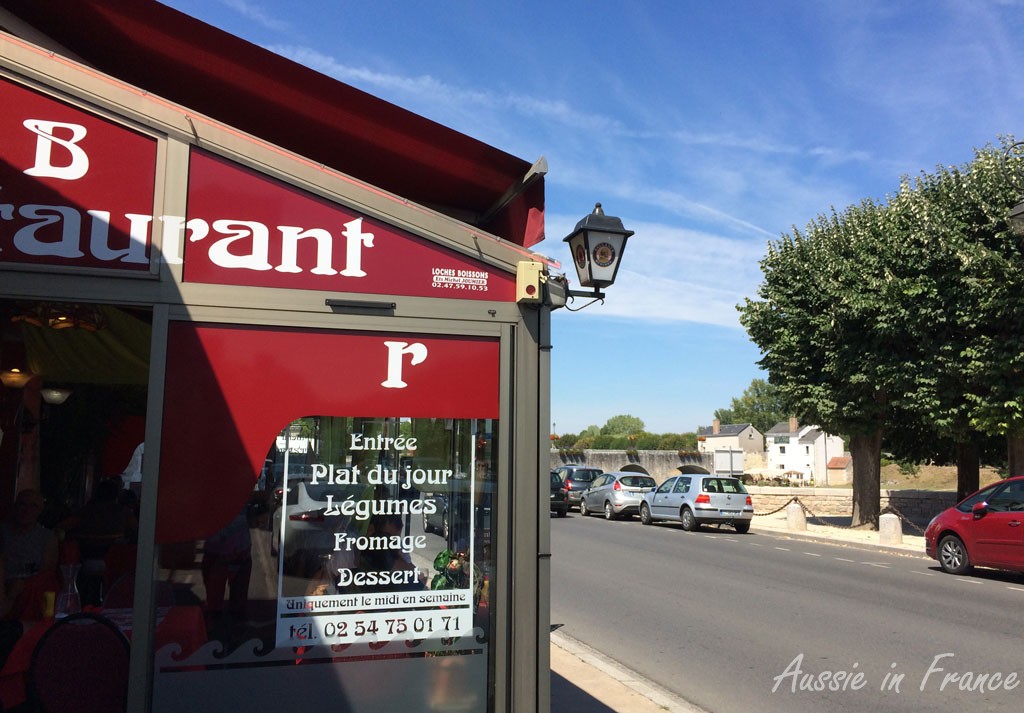 L’Embarcadère where we finally eat

I have stuffed tomatoes, steak (small piece) and chips, cheese and ice-cream. It’s all palatable though nothing special. Jean Michel has the same thing except he has beef flank (hampe) instead of steak. Just in case you’ve never discovered this, the piece of meat that’s called steak (often written steack) in France is not what Australians call steak. It’s a specific cheap cut of grilling beef. It is NOT fillet or entrecôte. 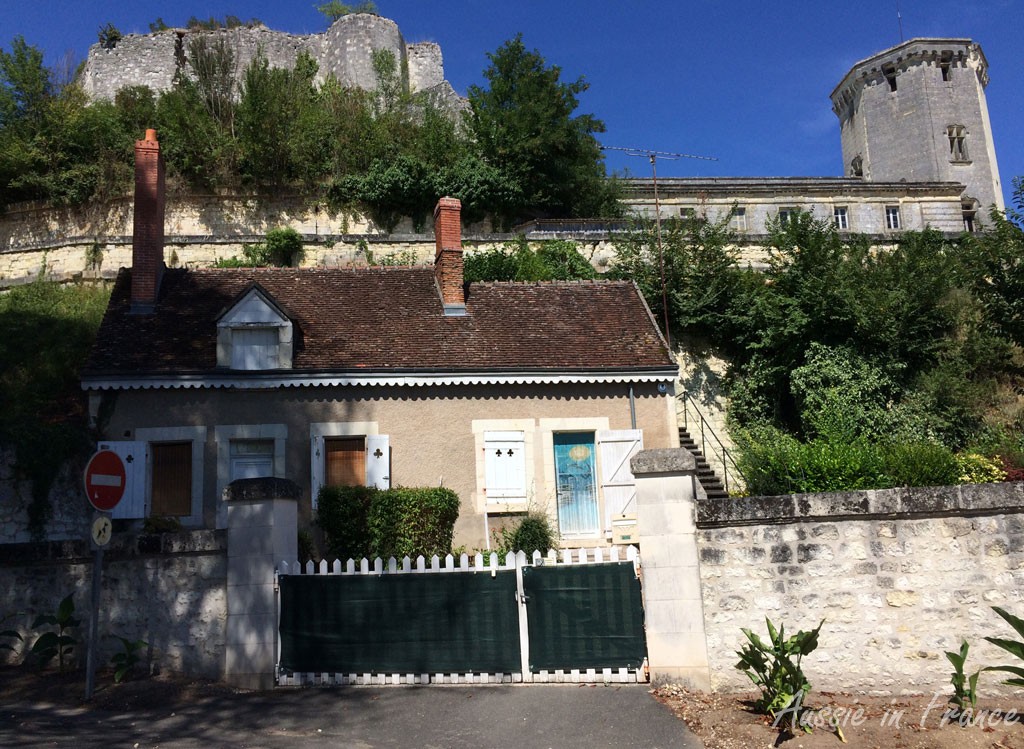 We’ve finished our coffee so we set off to visit the town, starting with the tourist office because we’d like to find a better route to cycle back to Montrichard. Disappointment once again. They don’t have any cycle maps either. They give us a map of the town indicating 20 places to visit, but with explanations for only two of them : the castle and the collegiate church. 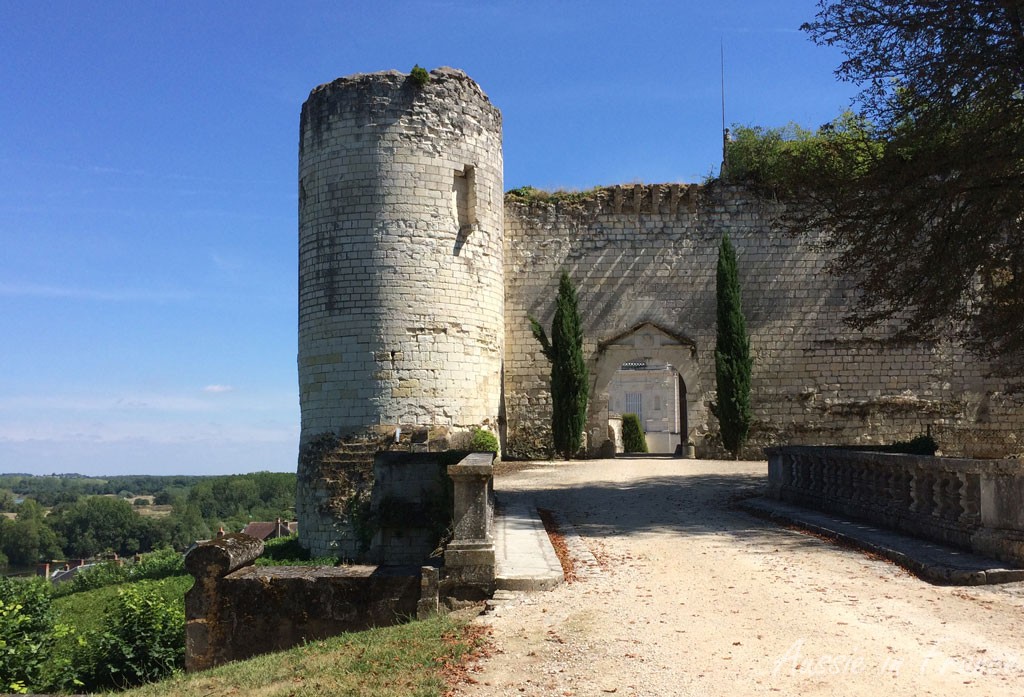 The entrance to the château

We’re just next to the road leading up to the château and we debate whether it’s worth it. We decide to make the effort. Halfway up, we talk to a man with a truck sweeping up dead leaves. I can’t believe there are already autumn leaves in August but the man tells us the trees have a disease. That’s a relief (not for the trees of course). Needless to say, the chestnut trees are already shedding their leaves everywhere. Sigh. 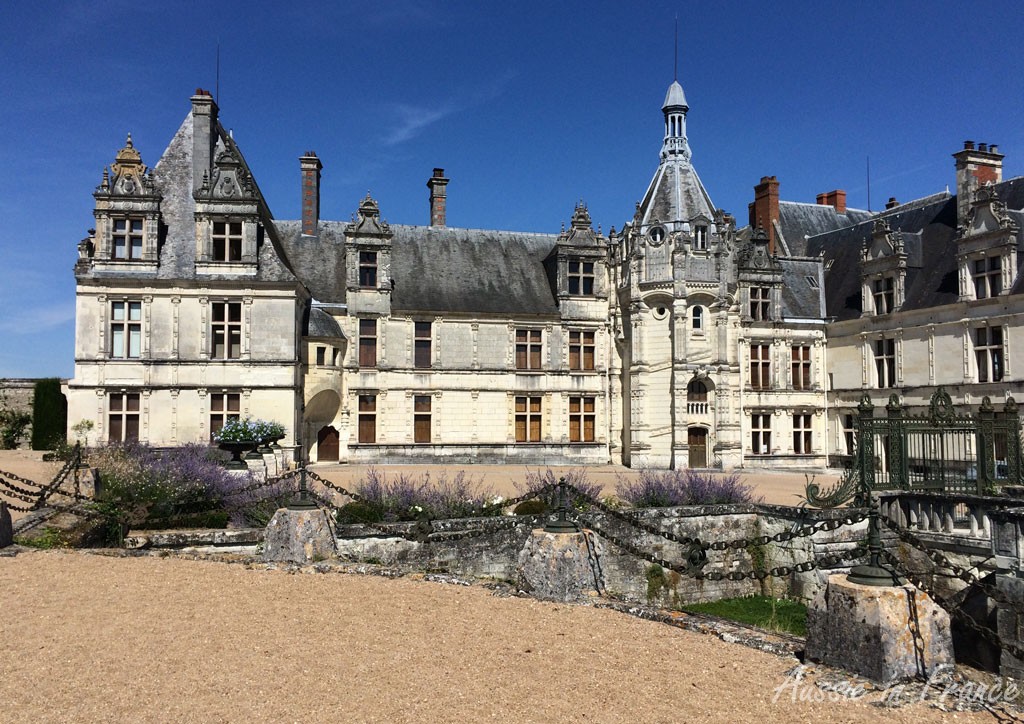 The Renaissance wing of the château

The château is privately owned, but visitors have free access to the courtyard. What a discovery! We’re so glad we made the decision to go to the top of the hill. 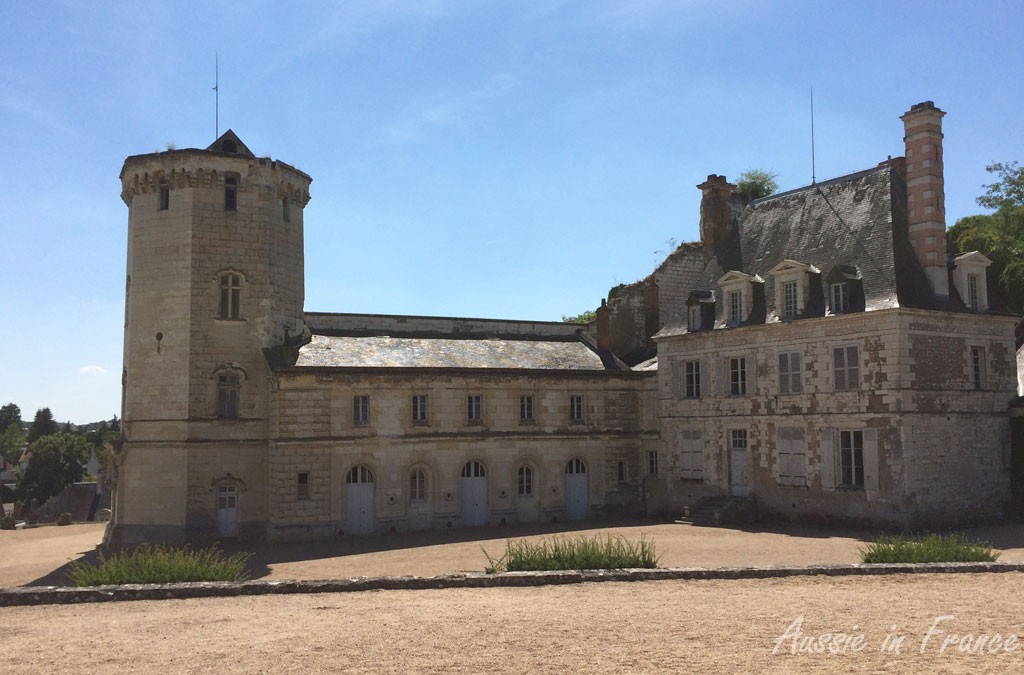 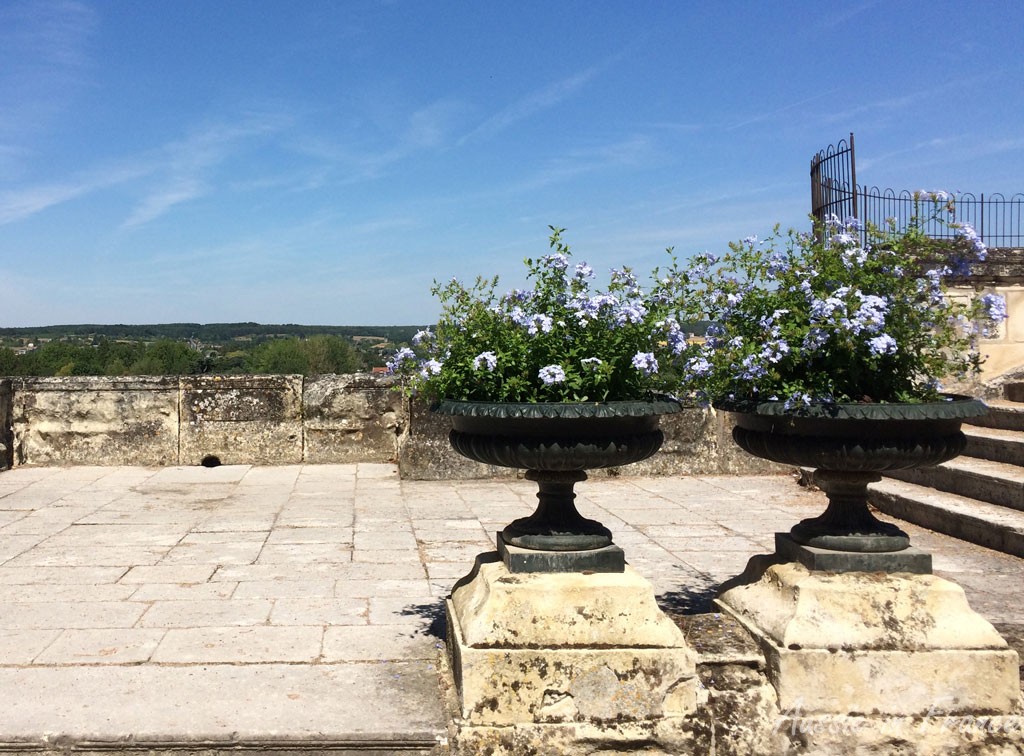 The blue flowers inside the courtyard

It has a wonderful view and lovely proportions. I particularly like the large stone urns with their blue flowers and immediately decide to plant them at home next year. I just have to find out what they are … 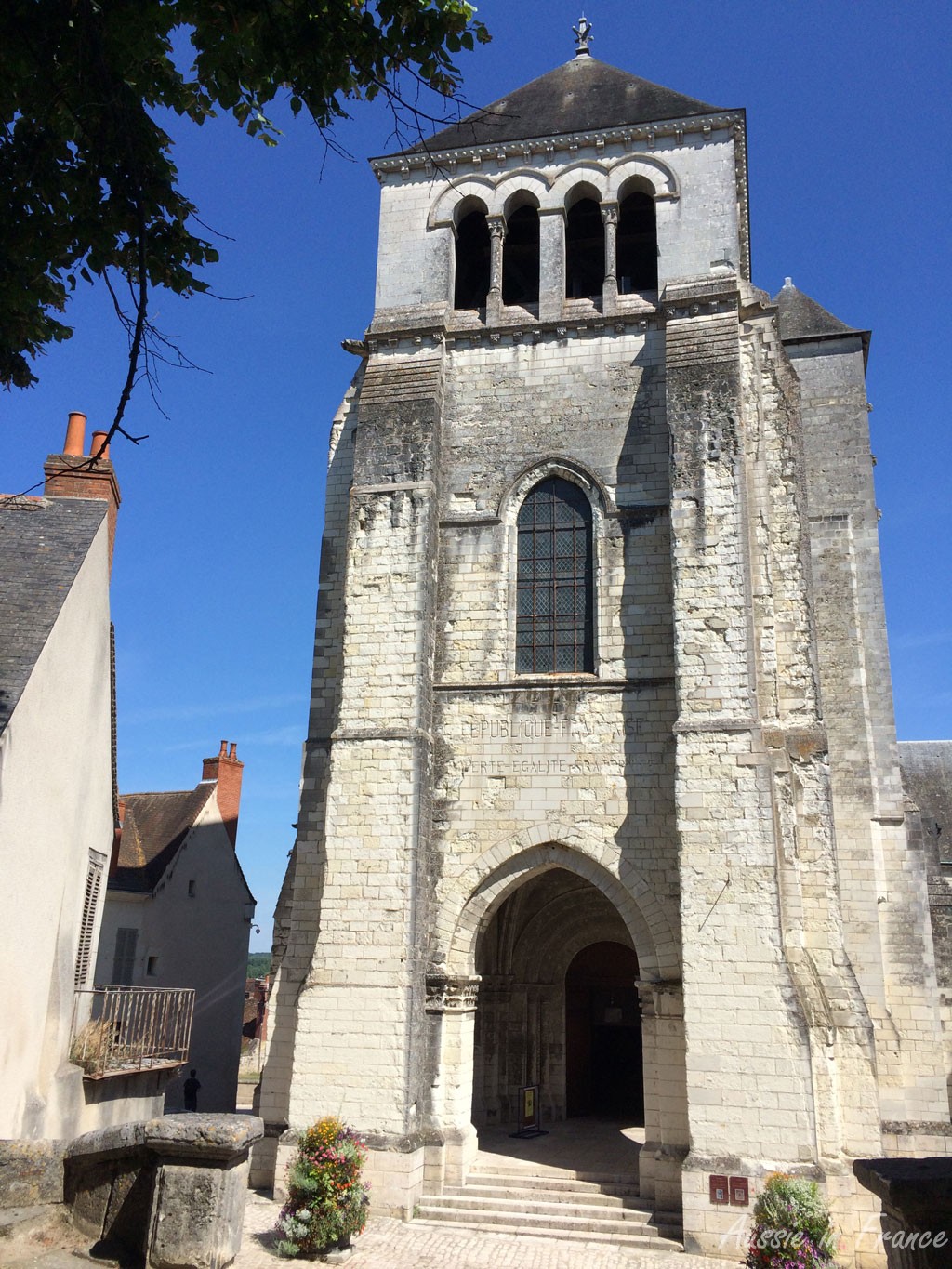 The collegiate church with its Republican inscription

We ride back down into the town and visit the 11th century Collegiate Church which has two interesting features. On the front there is an inscription that says « République française Liberté Egalité Fraternité ». Now, you must admit it’s original! The church was auctioned off during the French Revolution and given back to the Catholic Church in 1800. 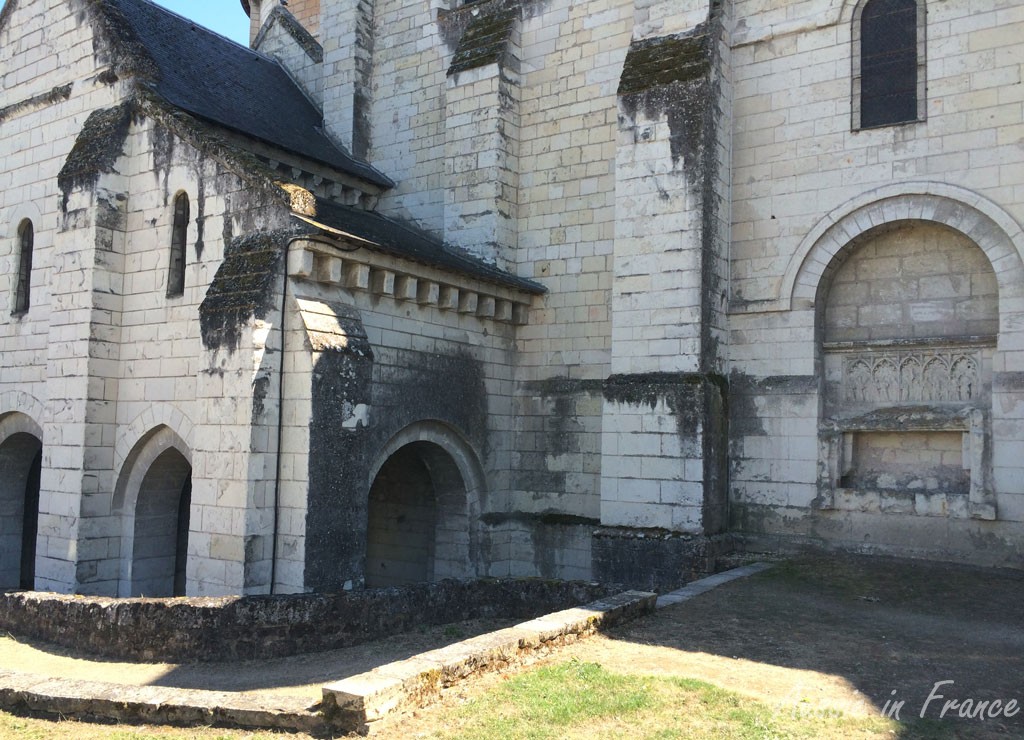 The other attraction is the tomb of Jeanne de Perellos, with its recumbent statue. She was banished from the church for seducing Louis II of Chalon, Count of Saint-Aignan from his legitimate spouse in 1420. What a claim to fame! 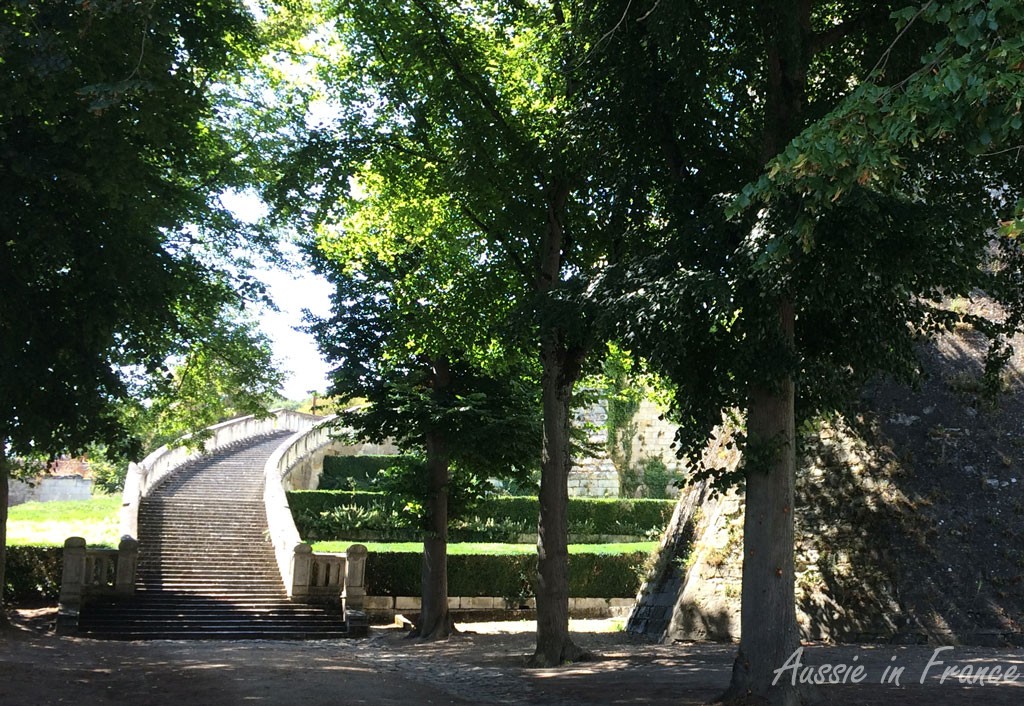 Opposite is a monumental staircase leading up to the château.

We cycle back through the little town with cobbled streets and several very old houses and down to the river. I have checked the map and found a little white road that runs roughly parallel to the main road and will take us back to Montrichard. Jean Michel has approved it. 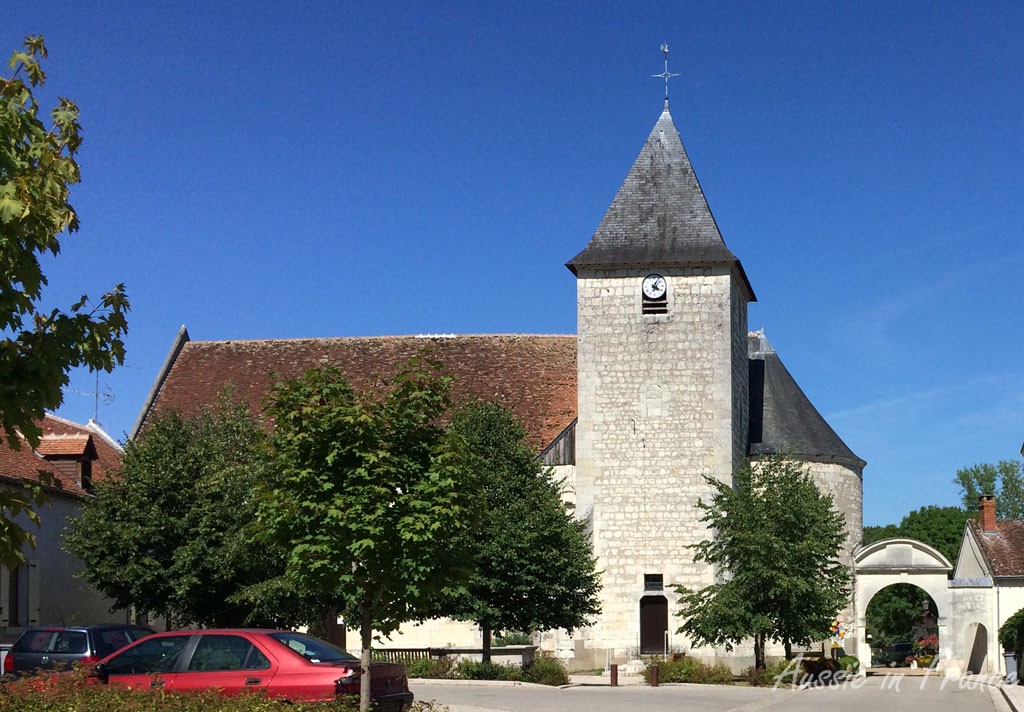 The church with its unusual archway in Pouillé

Well, it might run parallel to a main road, but it’s still a 90 kph road and we have to ride one behind the other which isn’t much fun. At Pouillé, which is roughly opposite Thésée, we see an interesting church with an archway on the right. Initially built in the 11th and 12th centuries, it was bombarded in 1940 but has since been restored. There are no cafés. 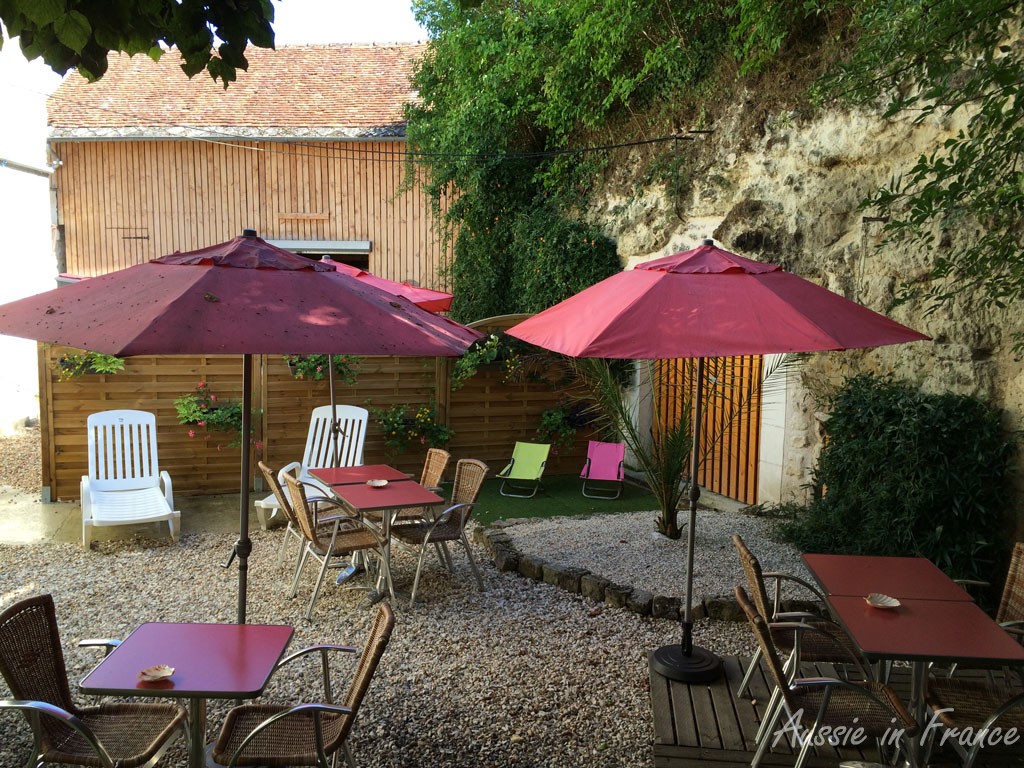 A shady terrace in Angé, very welcome after riding for 15 K under a 30°C sun

We continue on our way until Angé which has a few historical houses but more importantly, a café with a shady terrace out the back. By now it’s 30°C and we’ve been riding in the full sun since leaving Saint-Aignan. A cold drink is most welcome. 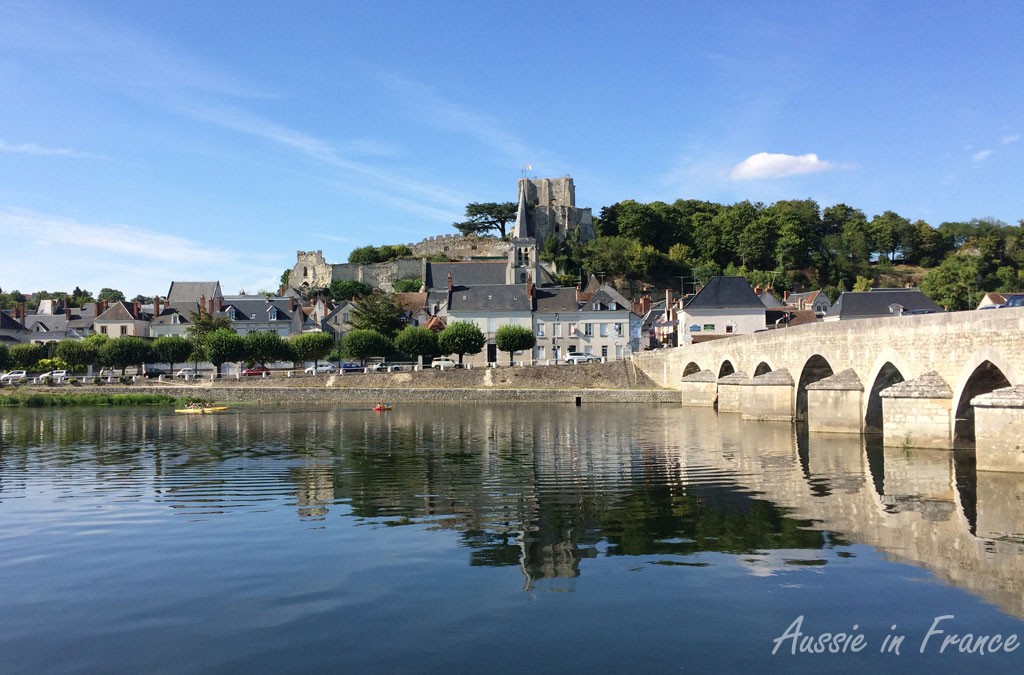 Montrichard taken from the beach side

Jean Michel studies the map again and tells me we’ll be able to leave the main road soon and take a smaller road. It does not happen. The smaller road is now part of an industrial estate. However, we are nearly at Montrichard which has a beach on the Cher and, best of all, ice-cream. 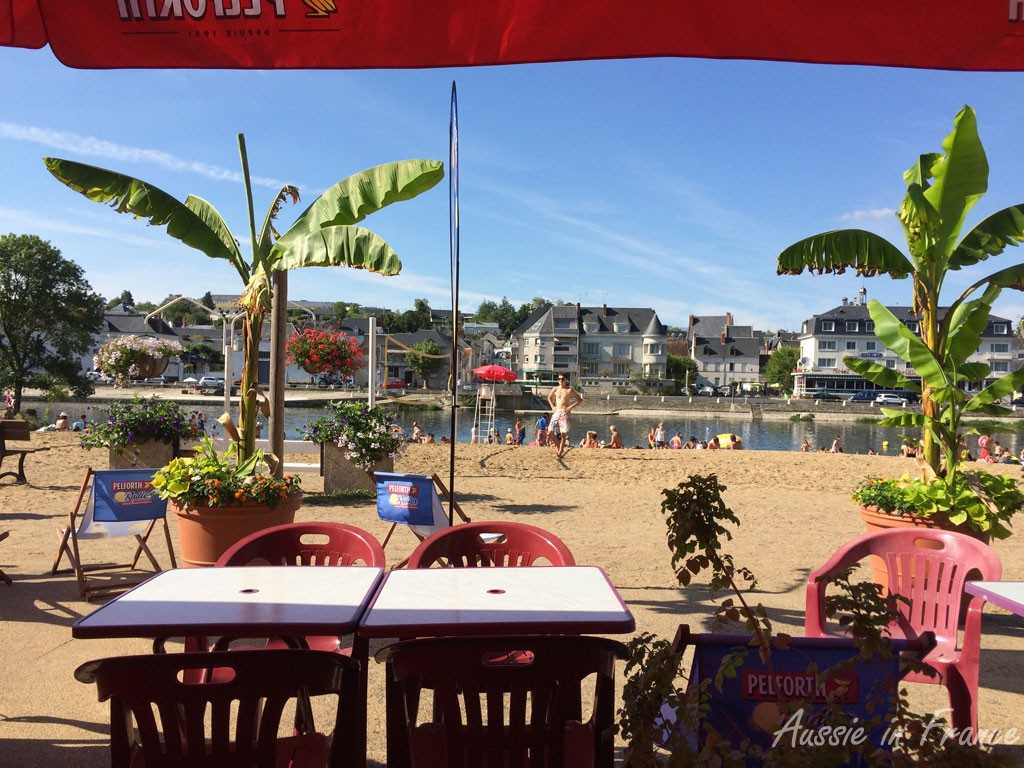 La Plage restaurant & bar at the beach in Montrichard

It’s like being at the seaside ! We go to a restaurant bar appropriately called La Plage which even has a live band playing old time songs – not particularly melodious but it all adds to the ambiance. We have an excellent ice-cream from a smiling waitress before mounting our bikes and riding back to the car: a round trip of 46 K  and 3 ½ hours in the saddle.