The Iron Gates on the Danube in Serbia – Why we didn’t cycle!

Posted on September 27, 2015 by Rosemary Kneipp

We finally leave Zemun near Belgrade around 11 am. The weather is better than we expected but still only 15°C and somewhat overcast. We’re heading for Donji Milanovac in the middle of the Iron Gate gorges (Djerdap) which are the deepest and narrowest on the Danube and the largest and longest in Europe. 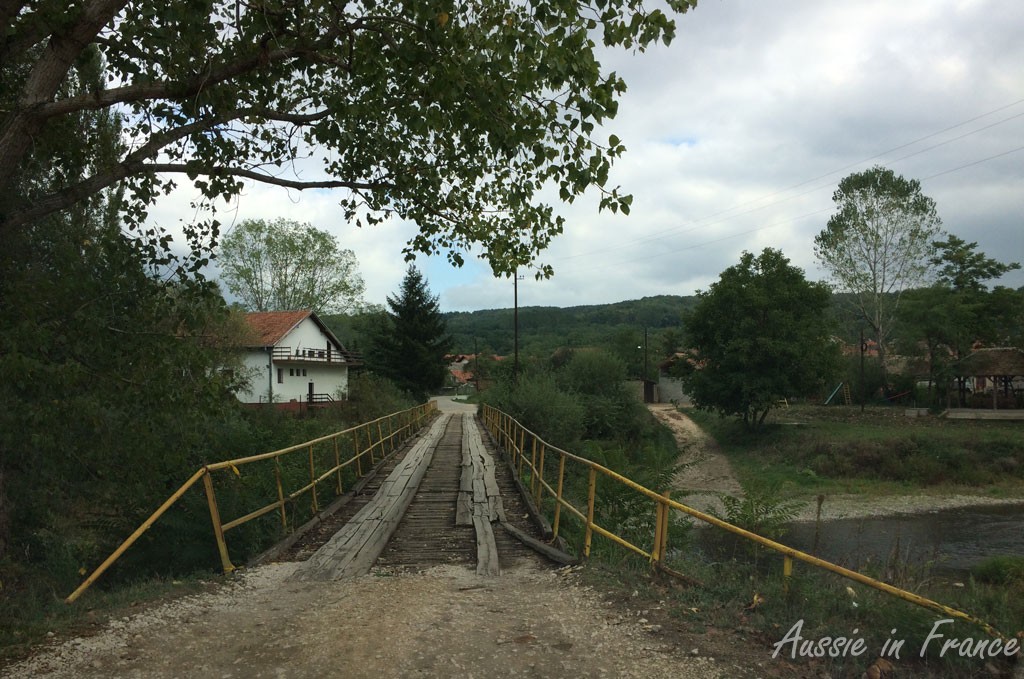 After leaving the Belgrade-Nis motorway, the Tom-Tom takes us on a small road to the Danube at Golubac and its famous fortress at the entrance to the gorges. At one stage we cross a rather dicey bridge. “Take a photo”, says Jean Michel, “so that if it collapses, there is something for posterity.” 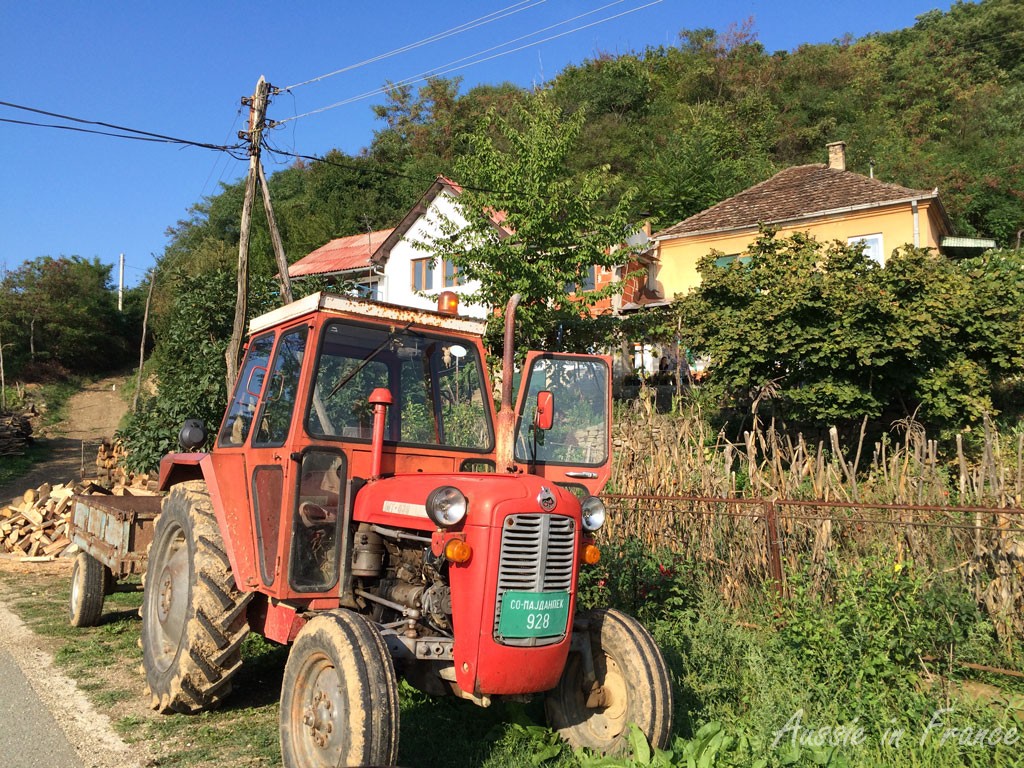 One of the many 1950s Massy Ferguson tractors

We pass numerous 1950-model Massy Ferguson tractors, to Jean Michel’s amusement – he learnt to drive on one when he was about 10 years old. 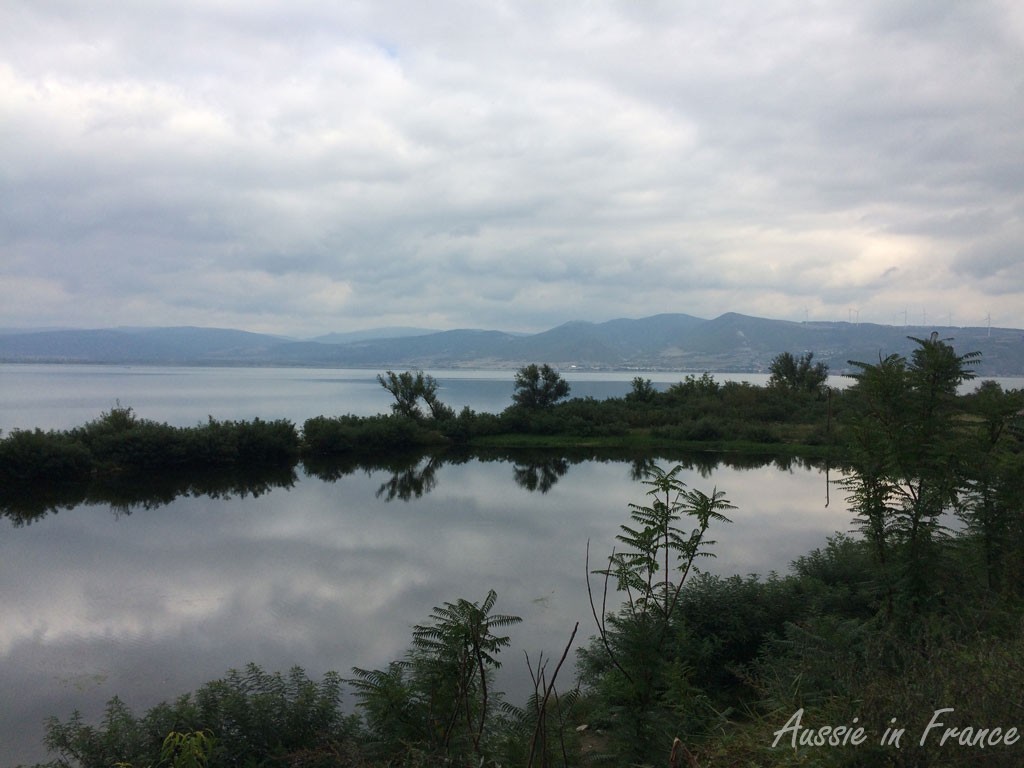 The Danube just outside Golubac

We park in Golubac and look for a restaurant. At the only one with any sign of life the owner tells us the kitchen is closed because it’s Saturday. I ask where we’ll find something to eat and he sends us to the castle 3 k away. I assume he means the fortress. 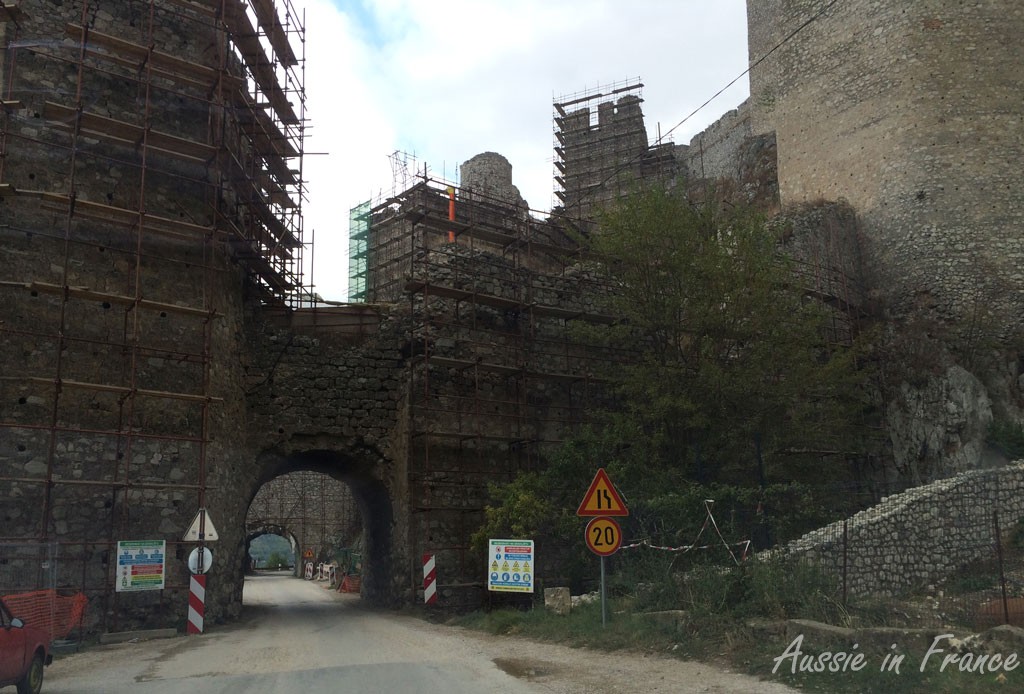 Golubac Fortress, at the entrance to the Iron Gates

Sure enough, after the fortress which is being restored with EU funding, we do indeed find a small restaurant where I have a mixed pork grill and Jean Michel grilled cat fish. My grill is served practically cold with very warm French fries and is so copious that I only eat half of it. I’m looking forward to tomato , cucumber and grapes in our room tonight! 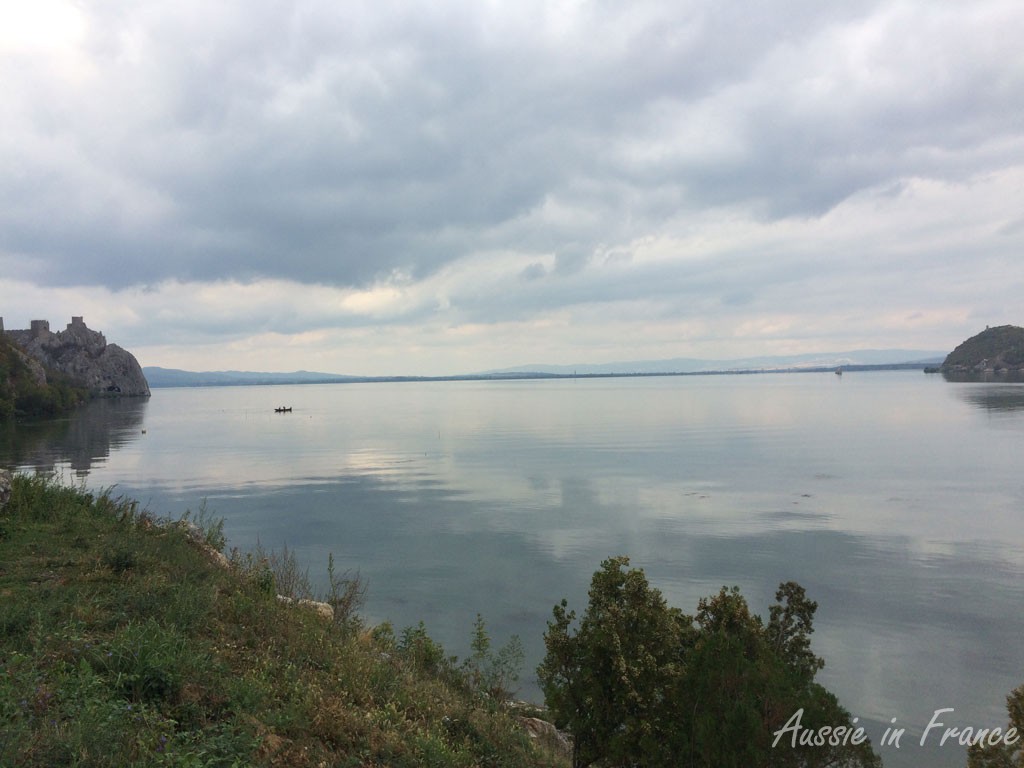 The view of the Danube opposite our restaurant

After lunch, the sun comes out and we begin driving through the series of 16 tunnels along the gorges and we are glad that we decided NOT to cycle today despite the increasing amount of sun. There is no way I would feel comfortable going through one of these tunnels at the same time as a car, let alone a truck. There is no separate cycling path and no cyclists, what’s more.

The scenary, however, is quite stunning and there are lots of places you can stop the car (all on the Danube side of the road) to take photos. 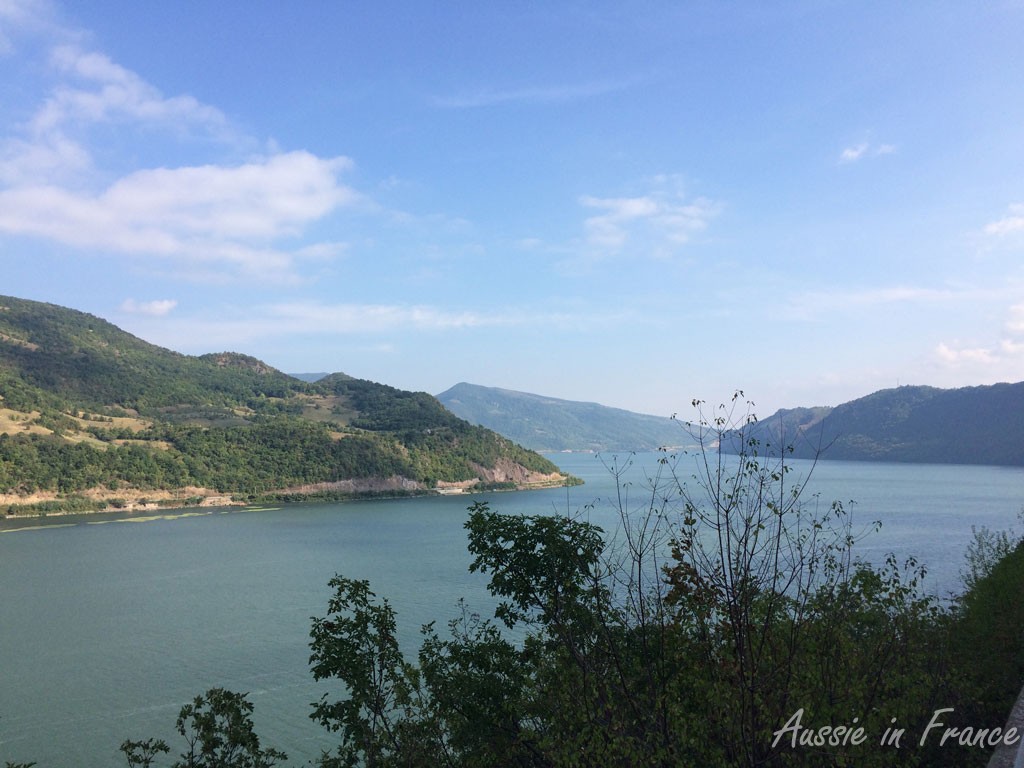 The view after lunch

We arrive in Donji Milanovac where we would thought we would take a cruise down the Danube through the gorges but there is not a boat or a soul in sight. I guess we are out of season. 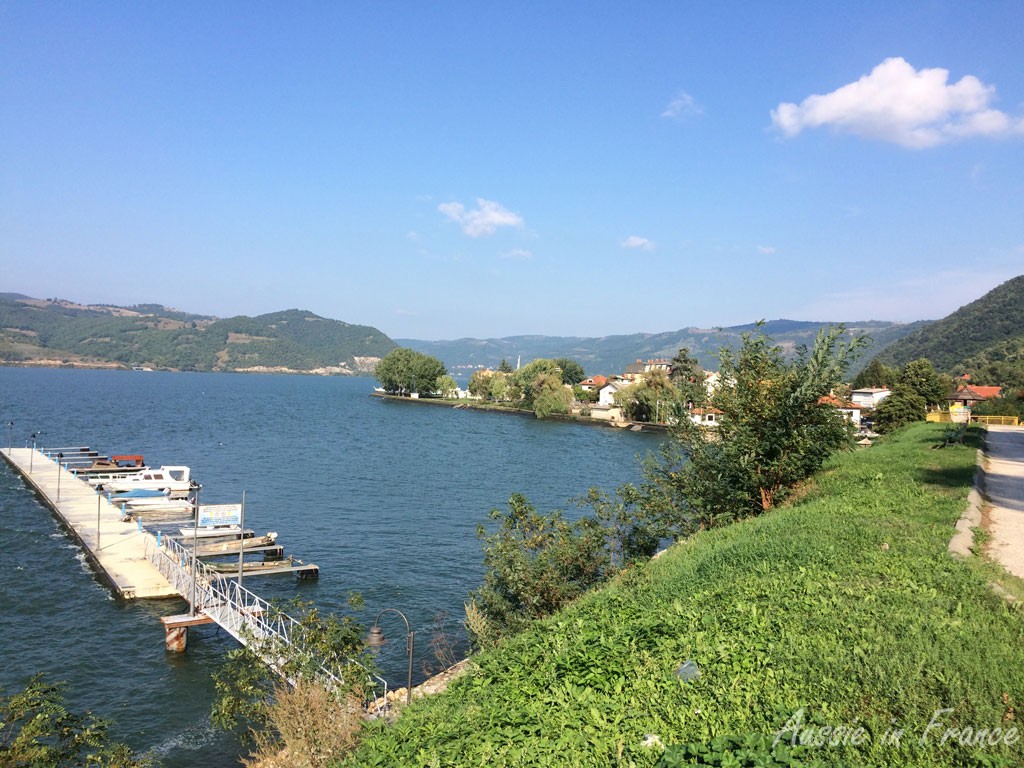 The approach to Donji Milanovac

We drive up the hill to the Lepenski Vir Hotel to see if they have a room. It reminds me of a place where we once stayed in Saint Petersbourg, only a little more upmarket – very eastern European and quite lugubrious. We check out the room and discover there is no wifi. I don’t have the reflex to take a photo of the wonderful view from the balcony though. We hand back our keys and leave. 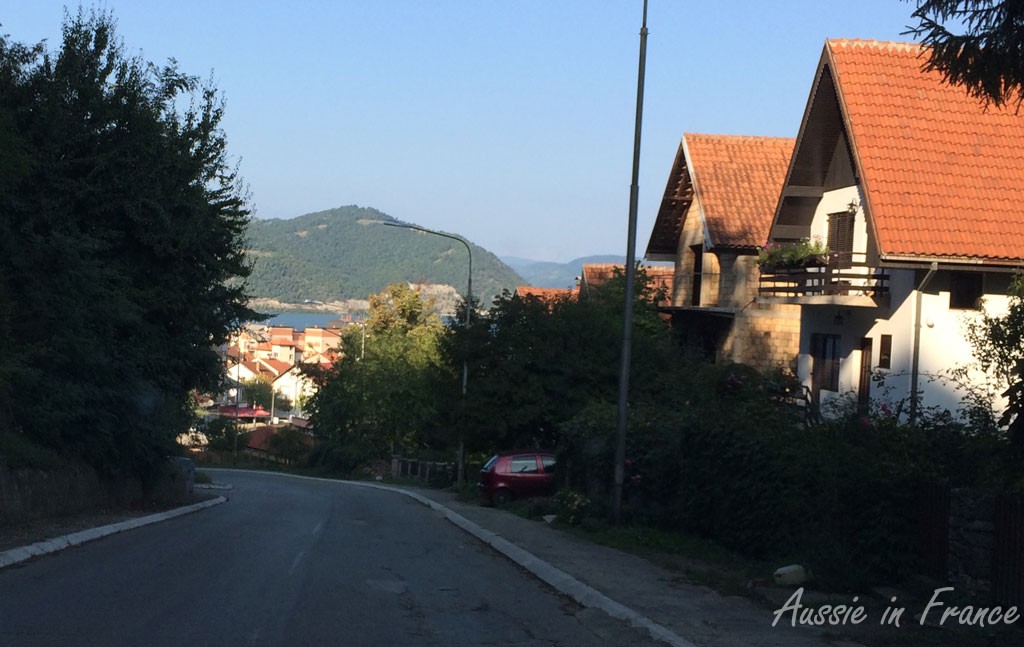 The view coming down the hill from the Lepenski Vir hotel

Our only possibility is to continue to Kladovo, 10 K after the enormous dam built across the Danube in 1972, a joint project between Romania and Serbia.

On the way, we see the narrowest part of the gorges. 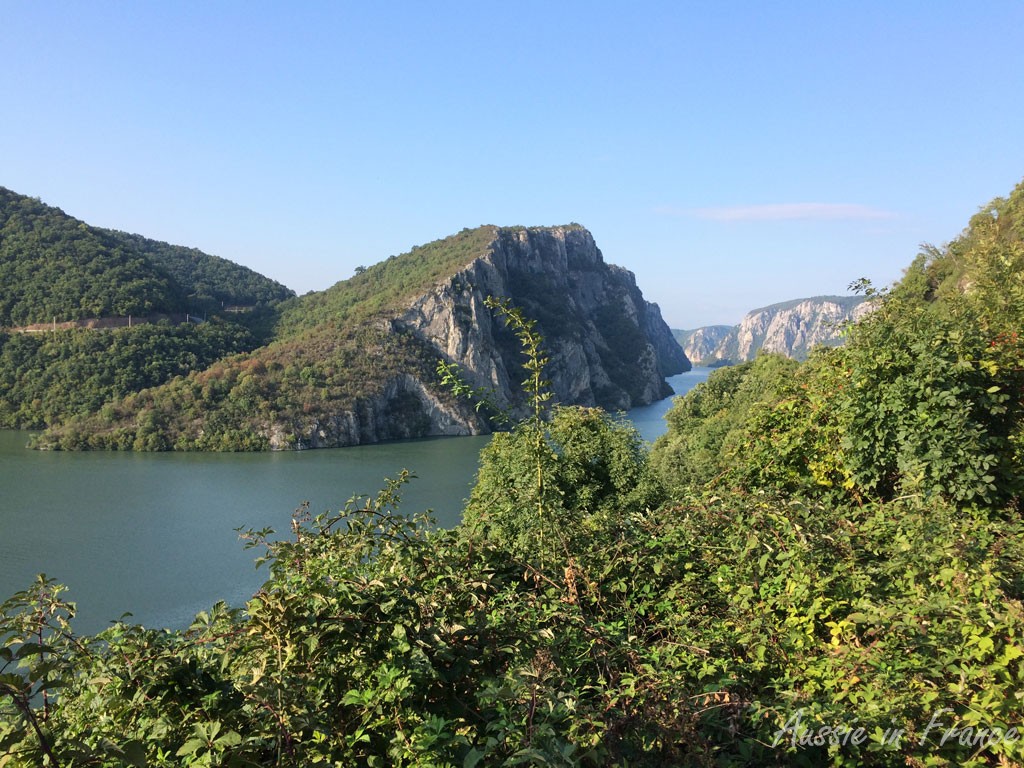 The narrowest part of the gorges

We also see the Orthodox church built on the Romanian side of the Danube. 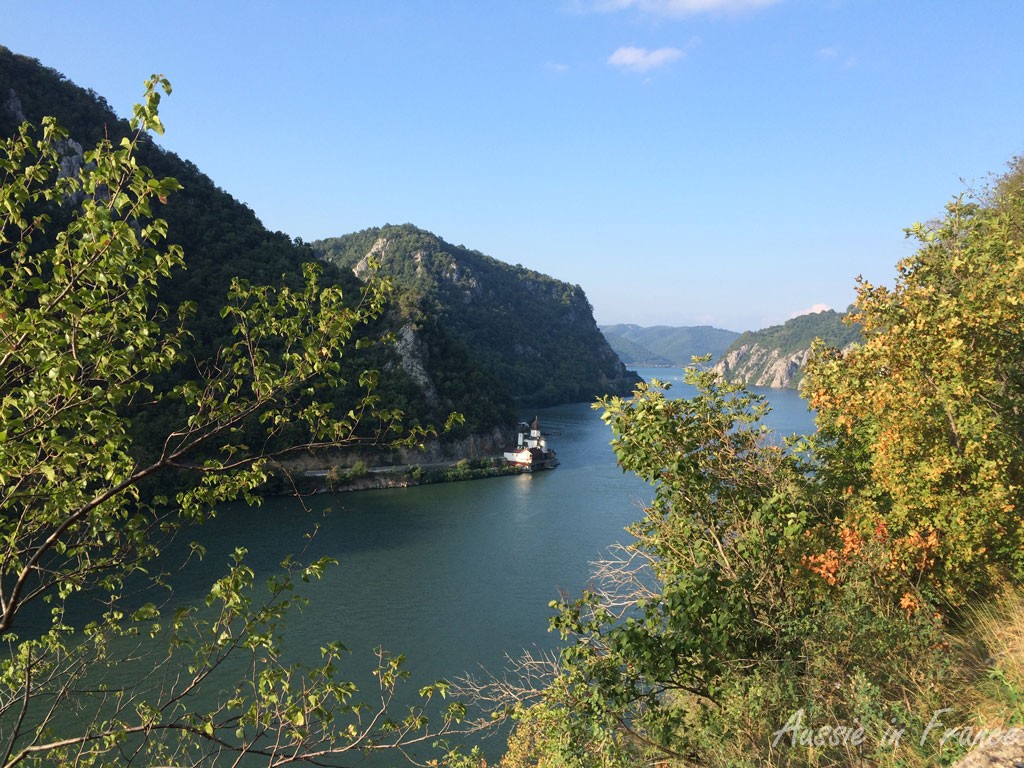 The church on the edge of the Danube below, on the Romanian side

However, the very bright sun means we can hardly make out the portrait of Decebalus sculpted into the rock face and certainly can’t photograph it. 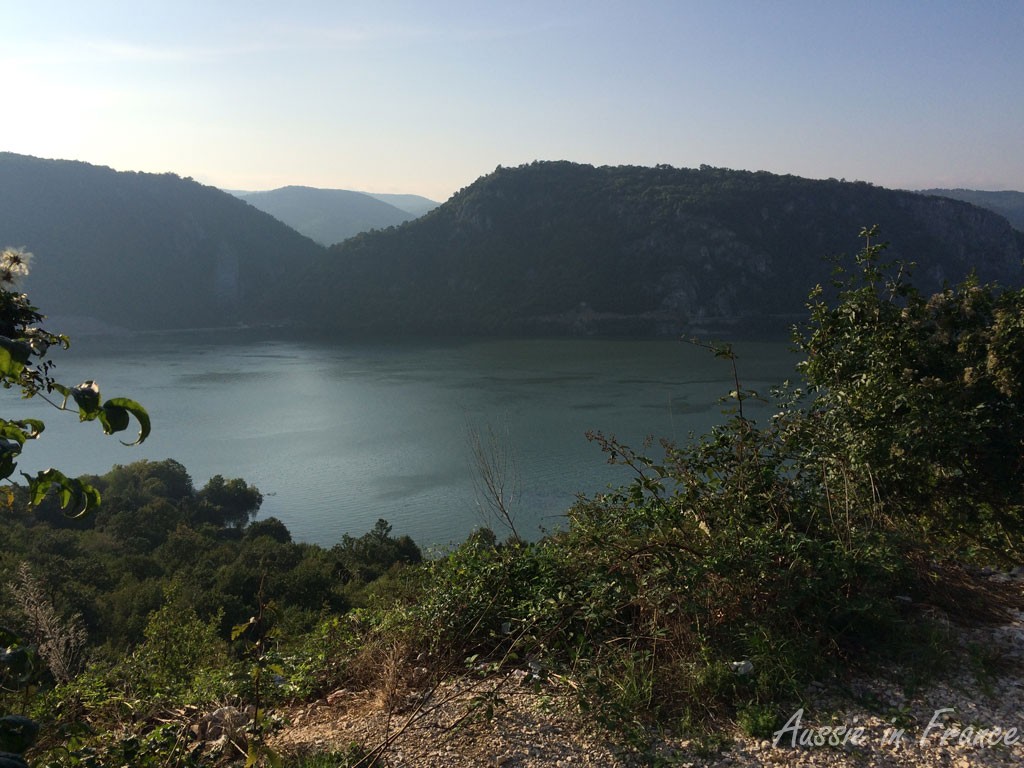 There is a hotel called Aquastar Danube that seems to have good reviews on booking.com so we give it a try. The room is spacious, with a small table and chairs as well as a large bed and is quite recent. We’re also paying for an outdoor spa we won’t be using. We have a panoramic view of the industrial harbour in Romania on the other bank of the river. 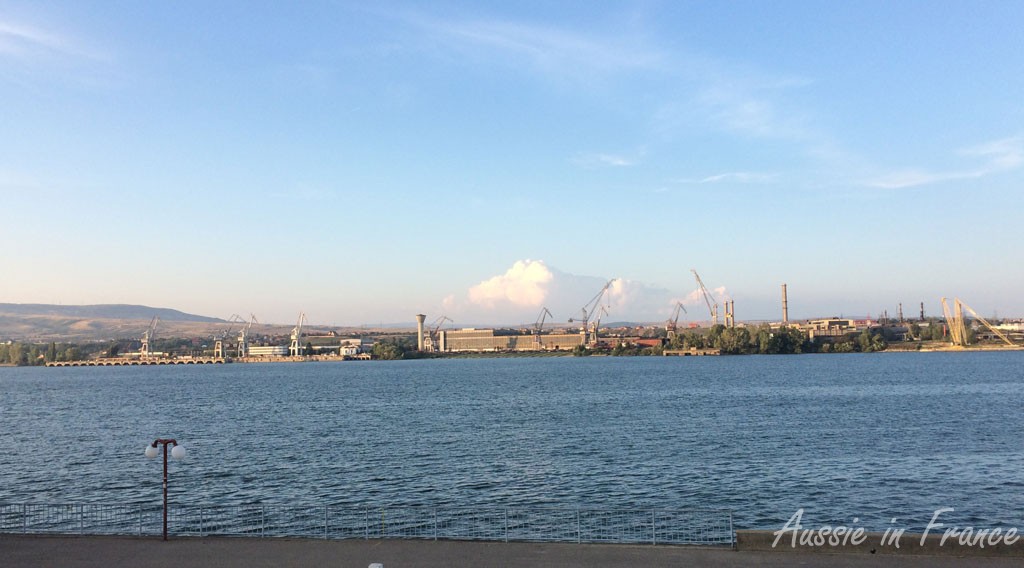 The panoramic view from the Aquastar Danube Hotel

We walk into the centre which is a series of cafés with comfortable chairs.  We choose one and have a glass of wine. As usual there are no nibbles to go with it. 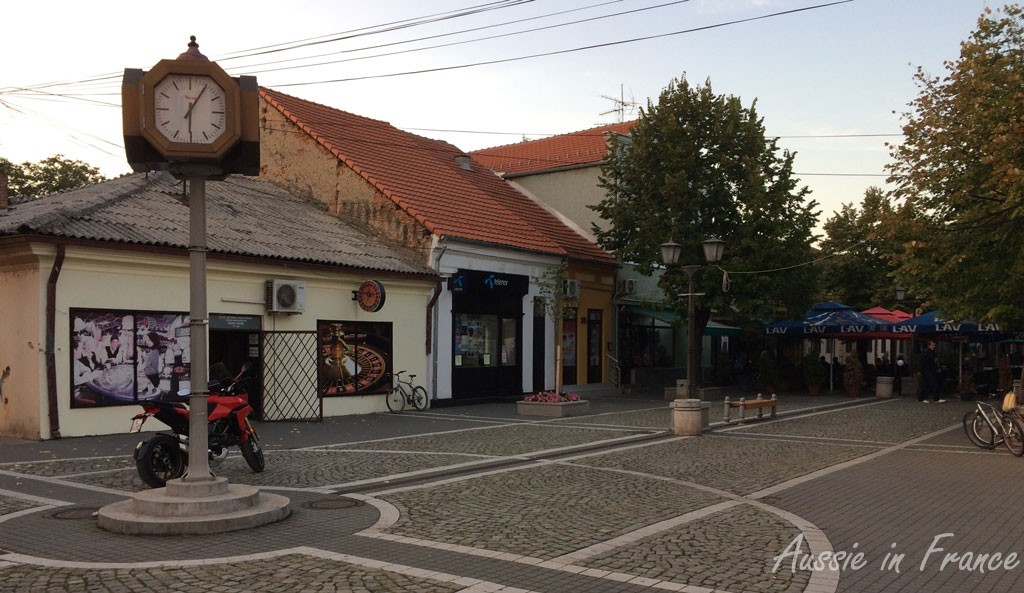 After a picnic dinner in our room, we spend the next three hours trying to decide where to go next because rain and low temperatures are forecast for most of the region for the next week. In the end we opt for Timisoara in Romania, not because it’s on the Danube, but because it’s midway to Gyor in Hungary  which might possibly offer cycling possibilities if the weather improves just a little bit.

5 Responses to The Iron Gates on the Danube in Serbia – Why we didn’t cycle!