Posted on September 26, 2015 by Rosemary Kneipp

We leave Zagreb with overcast skies and slight rain. We have lunch in a rest stop on the motorway in the car because it’s not warm enough to sit outside – not to mention there are no picnic tables. 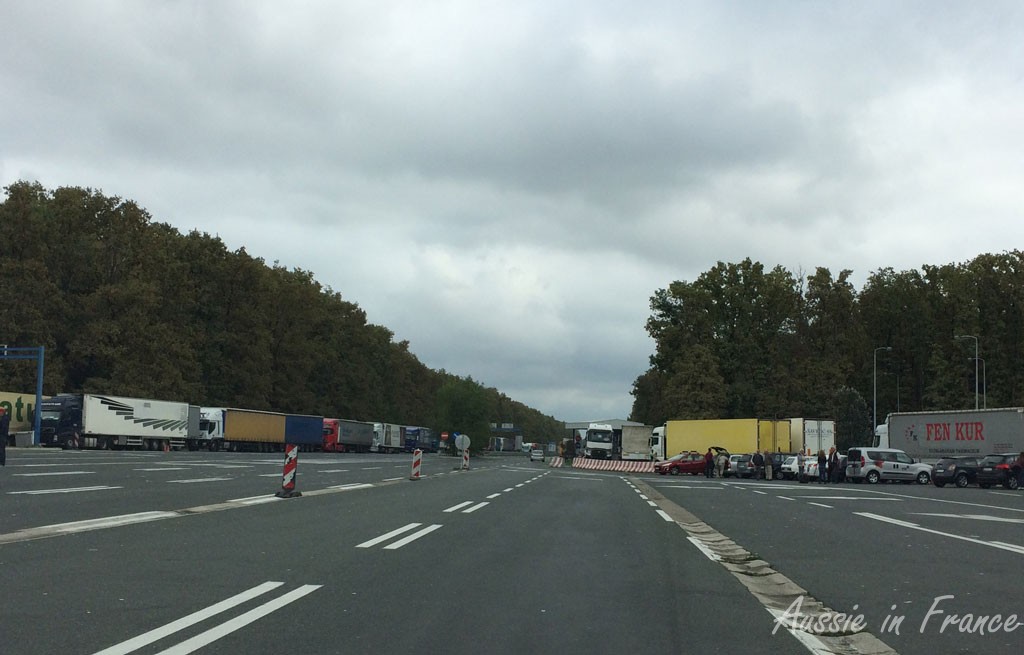 Trucks on the Croatian side of the border

We’re a bit worried about the border between Croatia and Serbia because Croatia is stopping lorries from entering the country in order to put pressure on the Serbian government to take more migrants (mostly from Syria). Apart from an accident between a car and a lorry in the queue, there is no problem about cars entering Serbia. However, at border control, three cars enter Serbia for every car that enters Croatia. 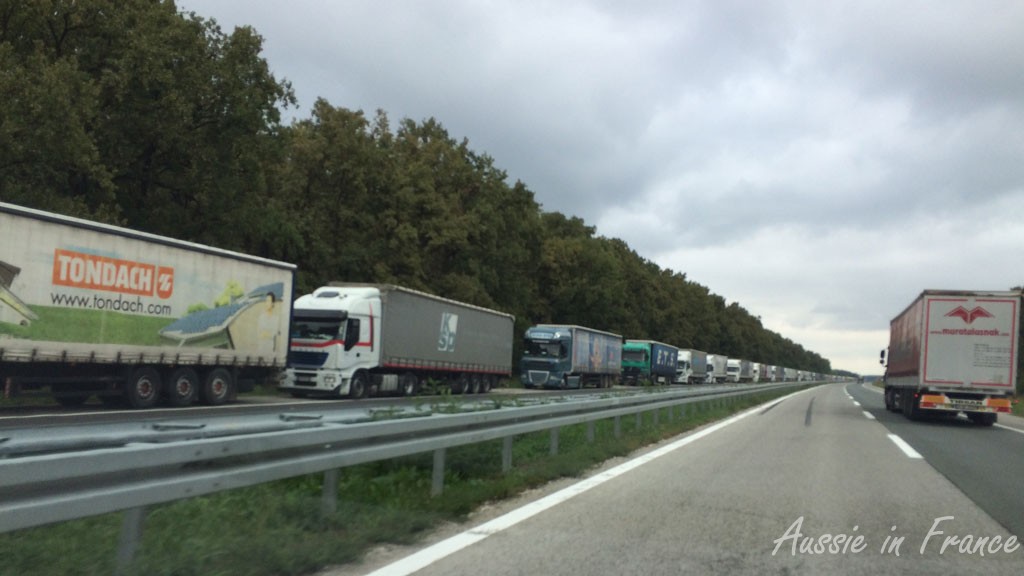 Trucks on the Serbian side of the border, banked up for 11 kilometers

After we leave the border, we see lorries waiting in line for 11 kilometers on the Serbian side. The rest of the journey to Belgrade is uneventful. 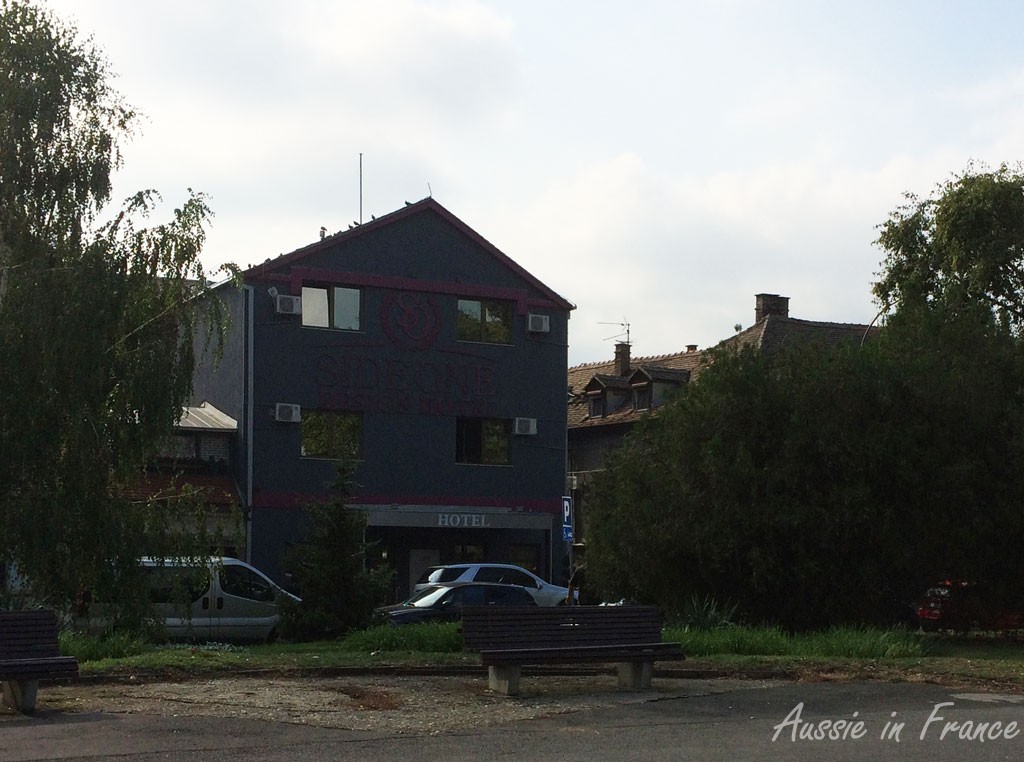 The One Side Design Hotel

We’ve reserved a hotel just outside the centre of Belgrade along the Danube in Zemun. We are able to park just in front (the hotel looks after the parking). It’s a bit spartan and the room is minute, but what can you expect for 33 euros a night including breakfast? 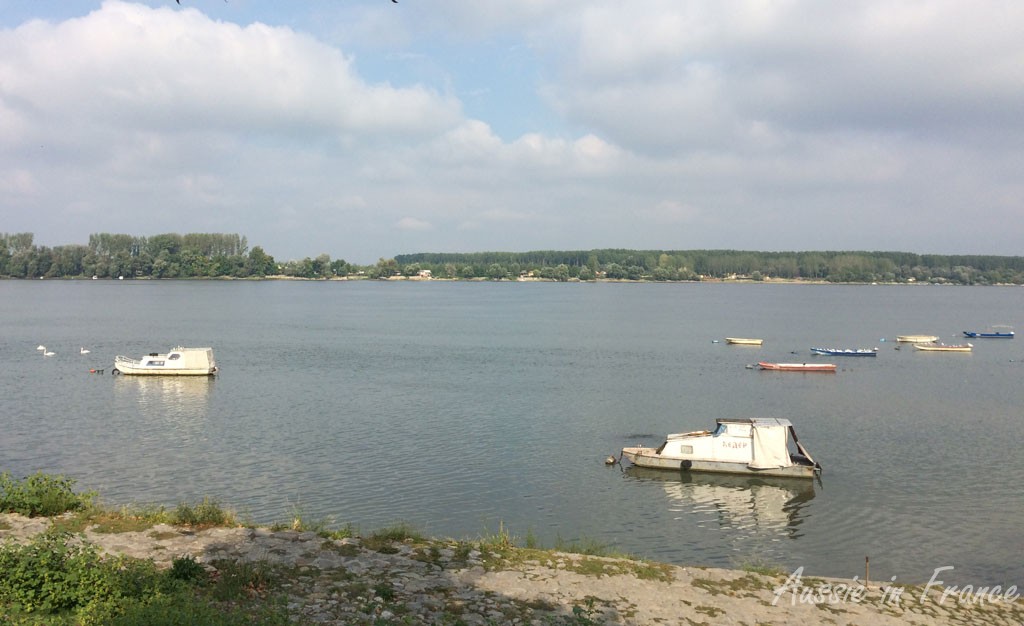 View of the Danube in front of the hotel

We drop our things and take off on our bikes to explore Belgrade. However, it’s already nearly 4 pm and we know it will be dark by 6.30 pm. We don’t have a lot of time. The centre is 7 k away. 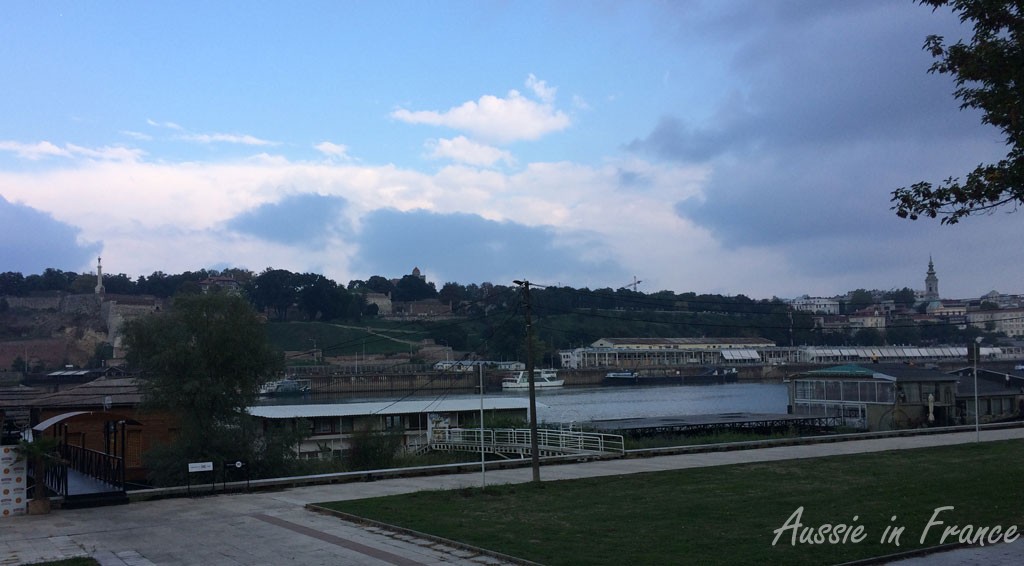 The ride along the Danube is pleasant. As usual in the former Eastern block countries, there is a constant contrast between old and new which a lot of very dilapidated buildings. 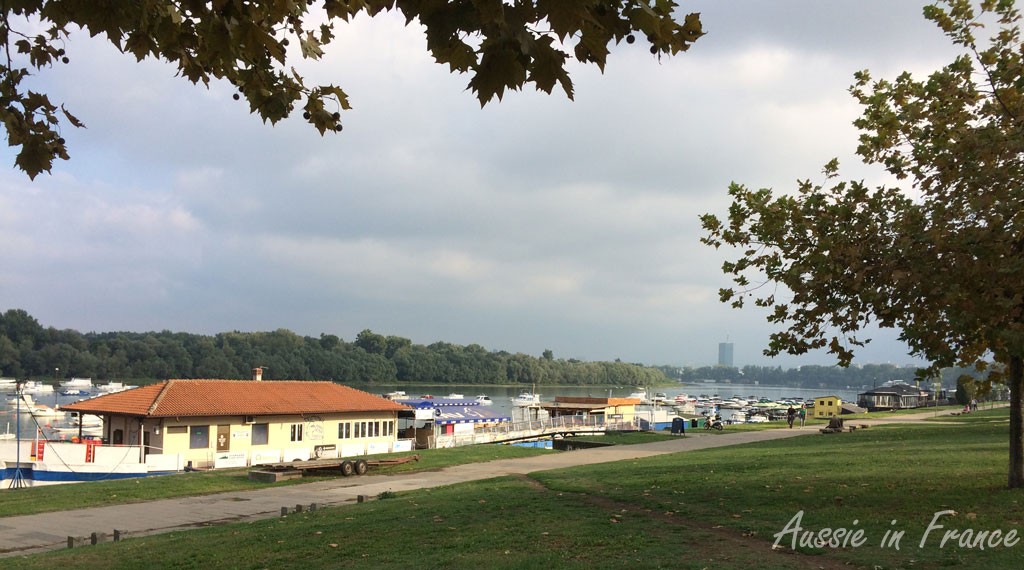 The view from the bike path in the park

We go past numerous house boats, many of which are restaurants or cafés. There are very few cyclists on the Eurovelo 6 route which then takes us through a park along the river. 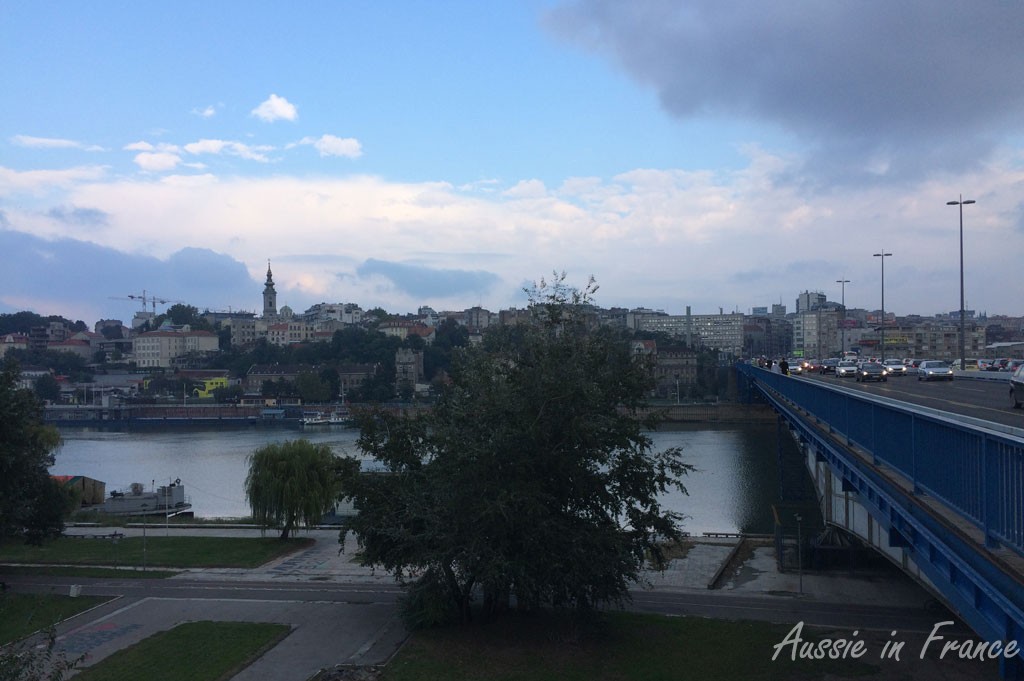 The bridge across to Belgrade centre

Belgrade is built on a hill overlooking the Danube on the other side so we have to cross a busy bridge. 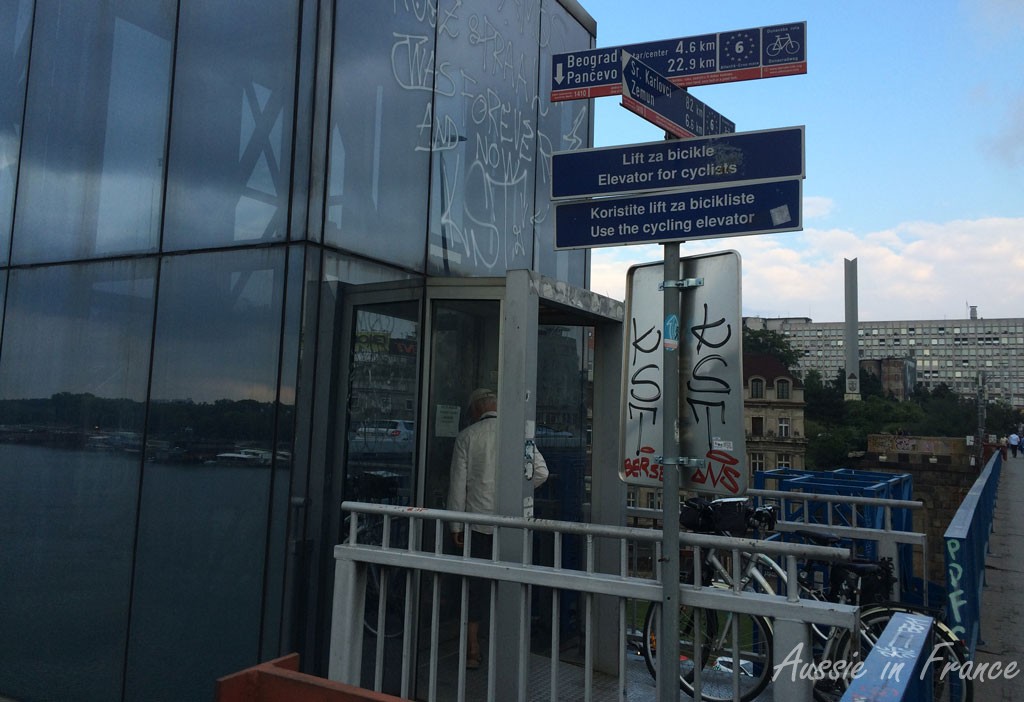 The bike lift down to the river bank

Three-quarters of the way across the bridge, we see there is a special bike lift to take us down to the bank below. Pedestrians are not allowed to use the lift and there is a lift man at the bottom keeping an eye on things. 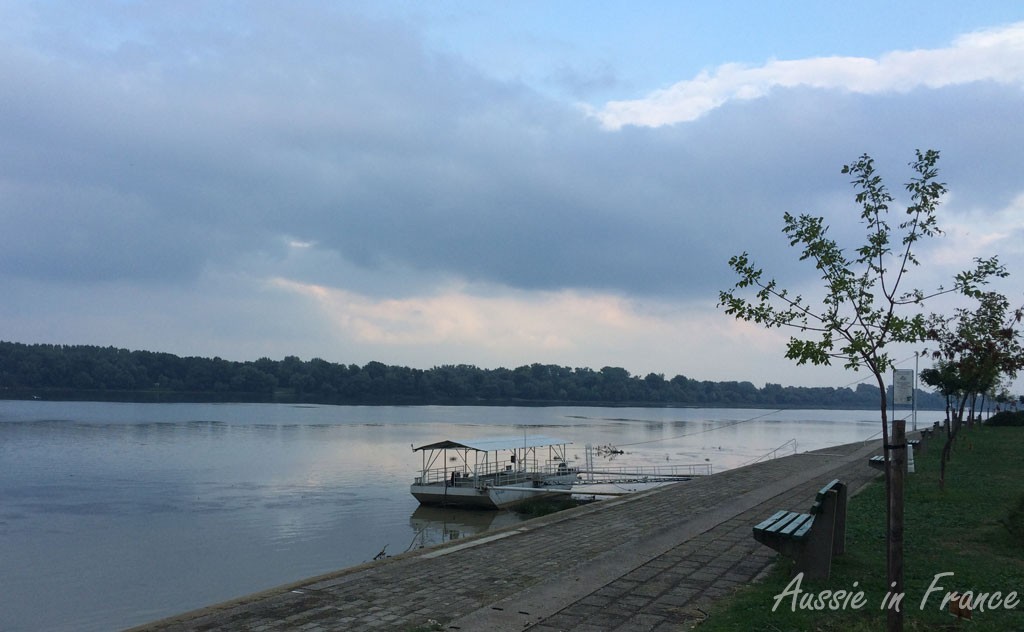 The Danube from the bike path on the Belgrade centre side

The Eurovelo 6 route continues along the edge of the Danube. After a couple of kilometers, we see an arrow pointing right to Belgrade centrar. And that is the end of any concession whatsoever to bikes. In fact we only ever see one other bike …

We go through an underpass then have to go up a hill on a road iwith trams. The pavement is very narrow and Jean Michel has already warned me about the danger of getting my wheel stuck in a tram line. We decide to wheel our bikes up the hill.

Our first impressoin of Belgrade centre

The first impression when we reach the centre of Belgrade is the number of people and general animation. There are people and cafés everywhere but very few buildings of any architectural interest except a few throwbacks to the Austro-Hungarian era. 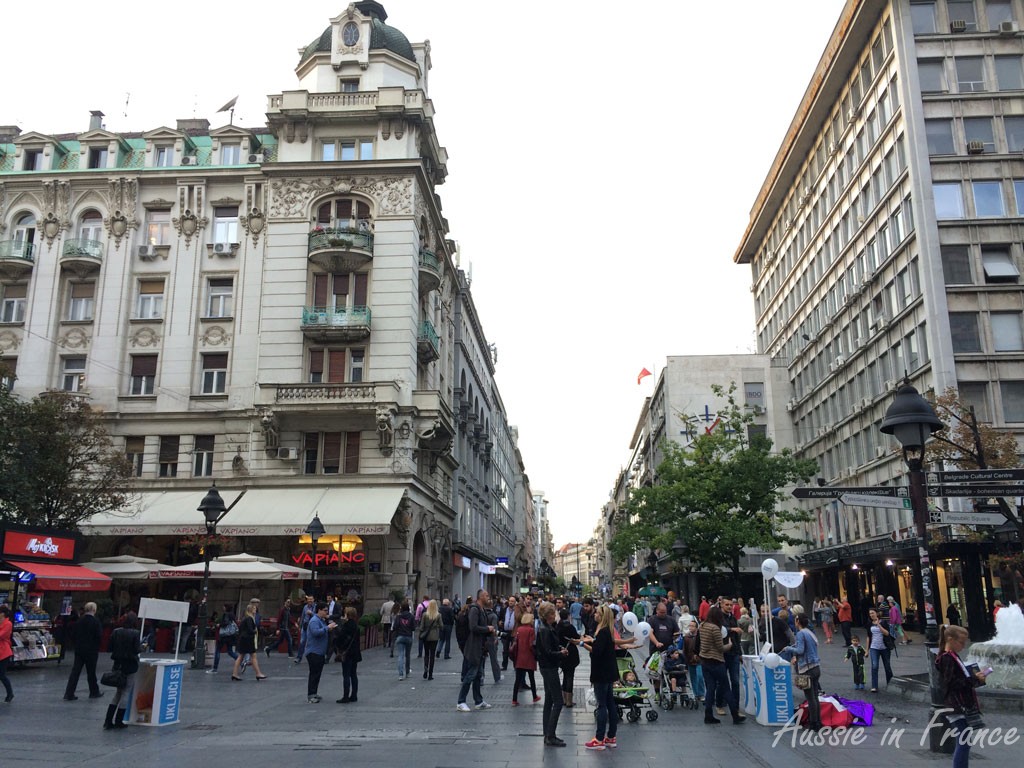 One of the buildings of Austro-Hungarian influence

We realise we’ve forgotten our Petit Futé guide book to Serbia so we look for the tourist office. Jean Michel minds the bikes while I go in. I ask for a brochure in French, but they only have one in English. I then ask if there is a cycling itinerary but my request is not understood. I am given a brochure on guided tours to Belgrade instead. 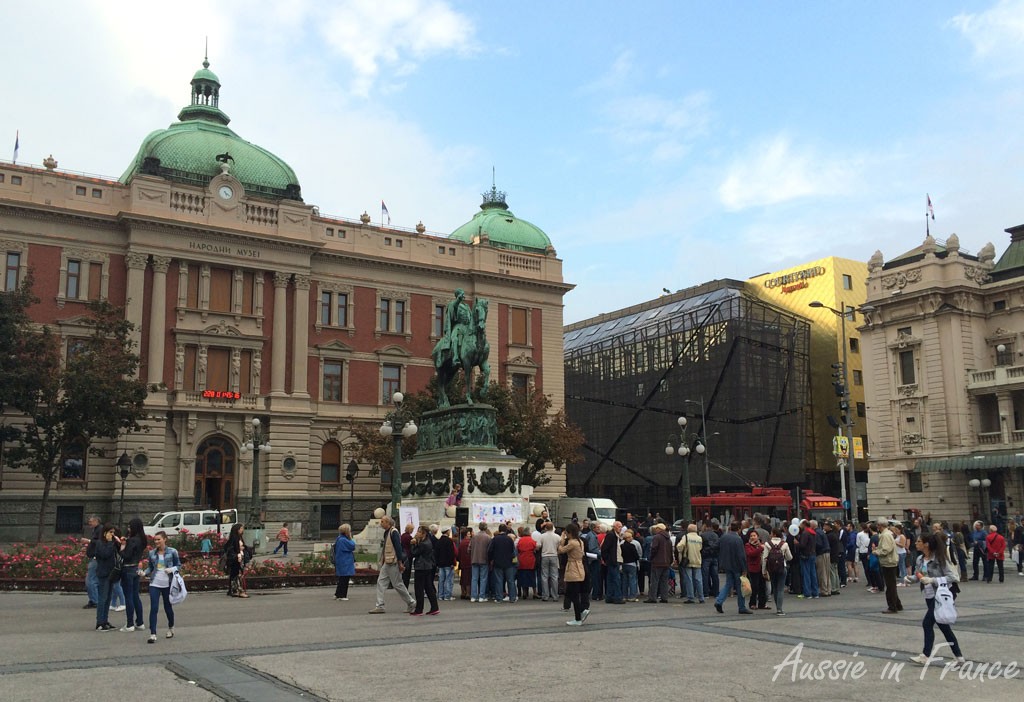 We check out the main attractions but there are very few except for museums and we don’t have either the time or inclination. There are a lot of buskers around and a large group of people in front of the national museum n Republic Square. A woman is speaking. I go closer and it seems that she is interpreting a man using sign language. I wish I could understand more. 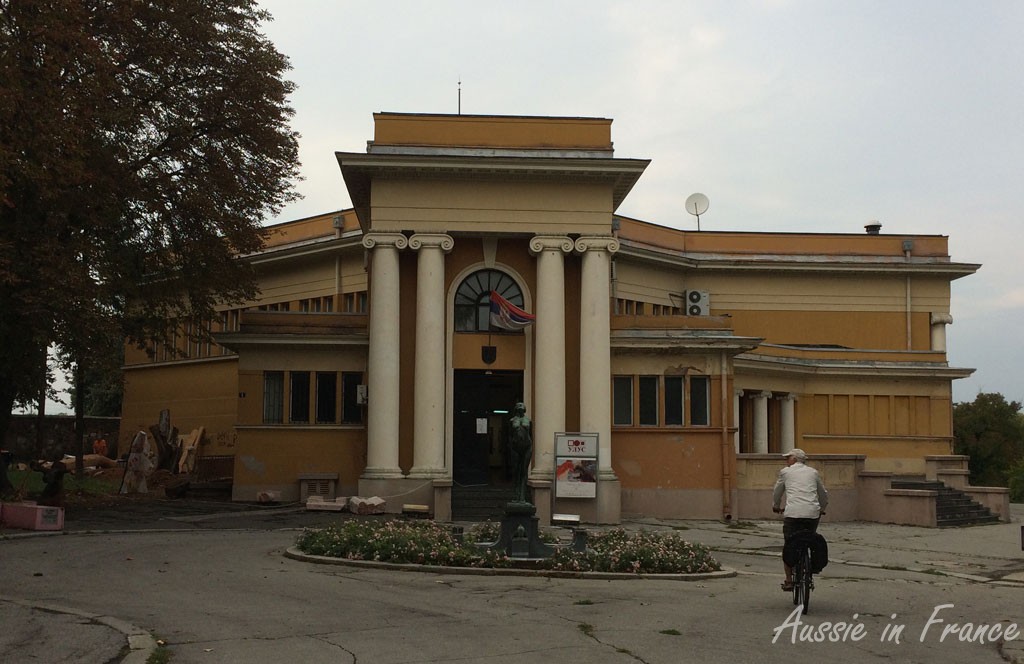 It’s getting late and I don’t want to ride home along the Danube in the dark so we decide to go and quickly visit the 14th century fortress reconstructed in the 18th century on the way back. We meet a lot of other visitors all going to the Torture Museum and to see the old army tanks, it seems. 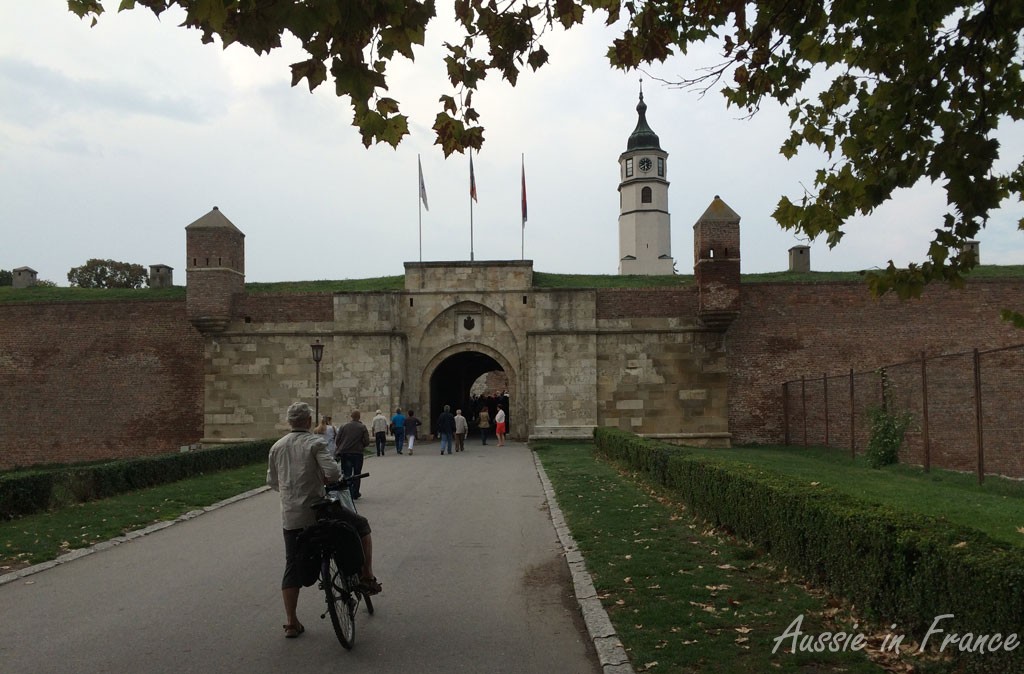 Belgrade Fortress, built in the14th century and reconstructed in the 18th century

We get back to the hotel just as night is falling to Jean Michel’s surprise by which time we are also a little cold. The temperature is about 14 or 15°C and we’re in three-quarter pants and sandals. 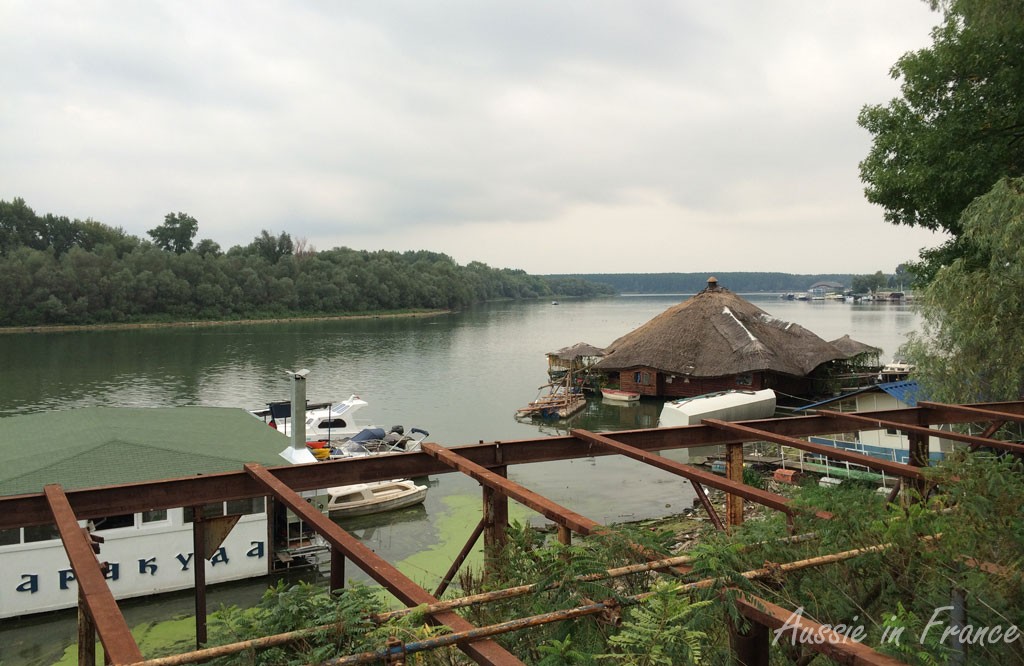 A thatched roof house boat on the Danube

It’s an intermittent fast day so we have dinner in our little room. I manage to stub my toe very badly on the leg of the bed but at least it isn’t broken. We spend over two hours trying to find a place to stay next day so that we can cycle along the Danube in the area called the Iron Gates. We would like an apartment for 3 nights but I can’t find anything that looks even halfway decent. There seem to be few hotels either. In the end, we go to bed. Whenever I wake up, my toe hurts which is very worrying if we are going to cycle tomorrow. 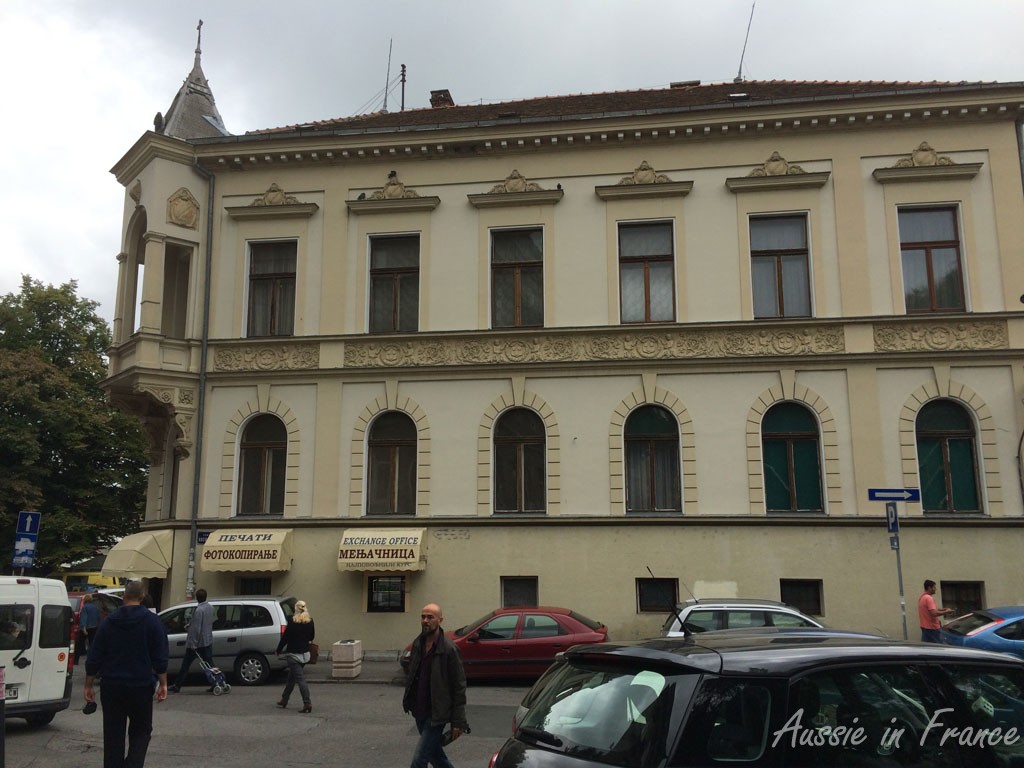 An Austro-Hungarian building in Zemun

However, next morning, I am able to walk in my sandals without pain. Breakfast is surprising. Everything is cold – the sausages, fried eggs, boiled eggs, scrambled eggs, French toast. They have some tasty brioche though. 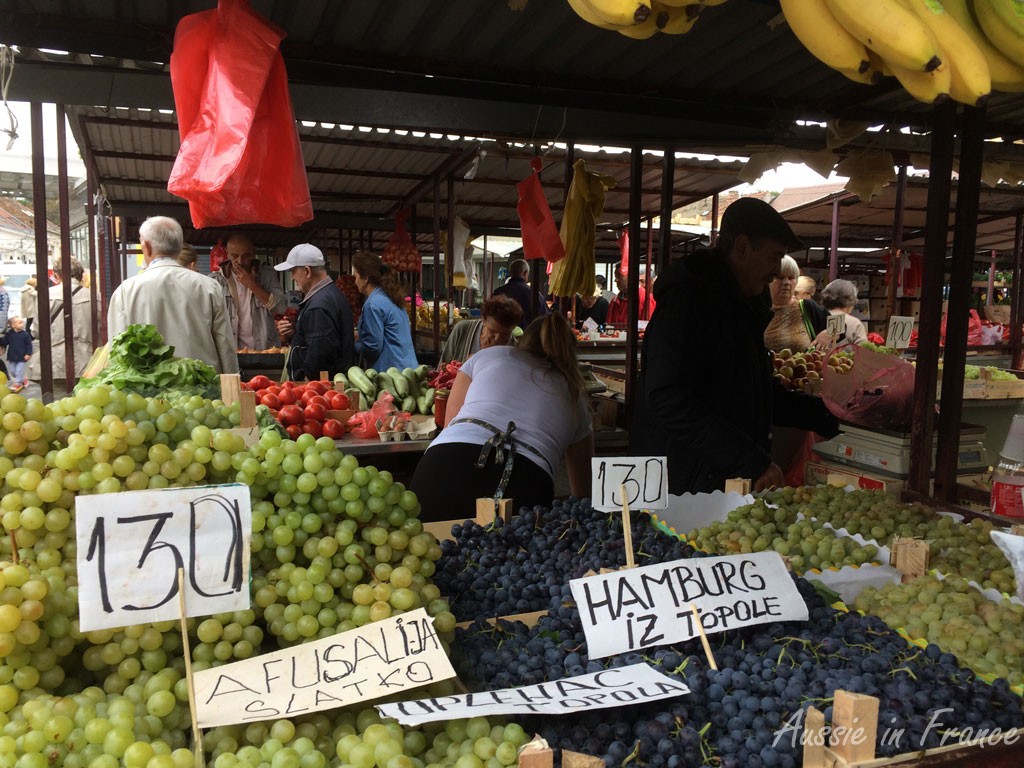 Grapes at the market in Zemum

After checking out  from the hotel, we go looking for a bancomat and see a local market which is great fun. We buy tomatoes for less than 50 euro cents a kilo, cucumbers and purple grapes called Hamburg which is a relief because we’ve been eating the strangest grapes since Lake Garda. Everyone is very friendly and helpful despite our lack of Serbian. The only things I know how to say is Hvala (thank you) and zdravo (hello). I forgot to mention that they use the Cyrillic alphabet here which is highly confusing. 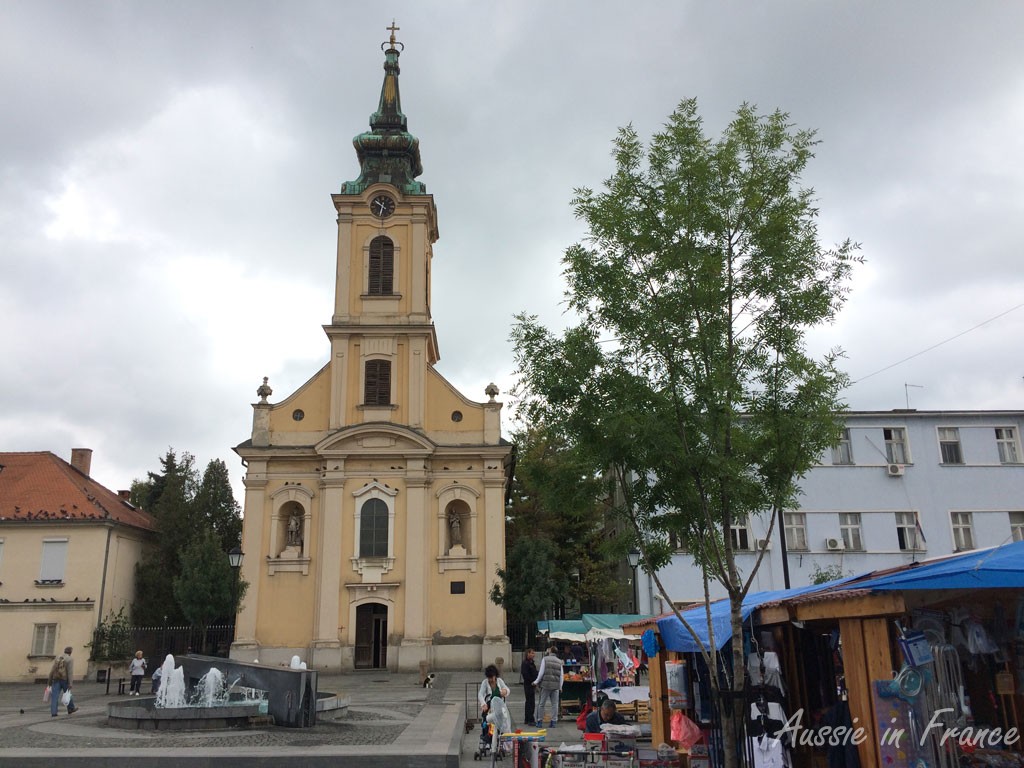 The main square in Zemum

We leave Belgrade without regret. We both find it quite depressing. The people are friendly, but nothing really works properly and there is a lot of poverty. Next stop, the Iron Gates which are the narrowest and deepest gorges in Europe.

6 Responses to Cycling around Belgrade