A Day in Paris with Lunch at Le Lobby

It’s nearly 9 am and we’re about to go to Paris for the day which we don’t do very often. To our immense surprise, the ground is covered in snow!  I run around taking photos and videos while Jean Michel makes sure all the bird feeders are well stocked. This is our first snowfall for the season and totally unexpected.

The roads aren’t too bad although they haven’t yet been sanded and we have to keep in the middle lane until Orléans. As we approach Paris, the sky is a brilliant blue but it’s only a few degrees so quite cold. 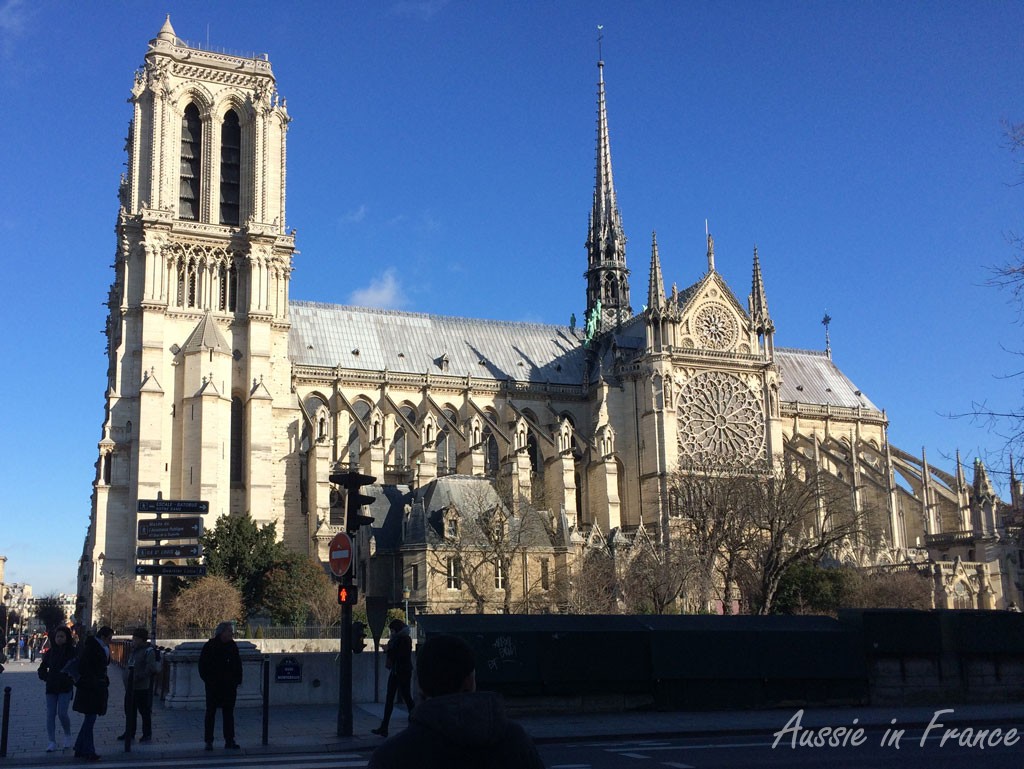 Driving past Notre Dame on our way to Au Vieux Campeur

Our first stop is  Paris’ best-known sports store – Au Vieux Campeur near Saint Germain des Prés – because we need to replace our falling apart Meindl Capri walking sandals to go to Australia next month. We tried to buy the same ones on the Internet, to no avail. Buying sandals in winter is not a great idea. 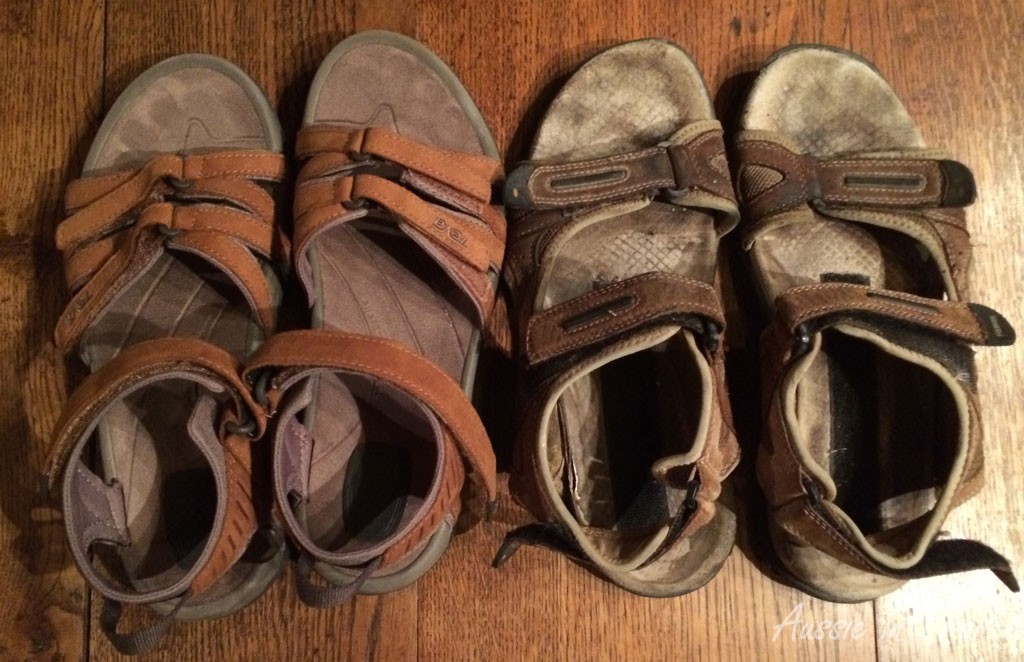 Despite the churlish, know-it-all salesman – even Jean Michel thinks he is terrible – we manage to find a suitable pair of sandals before we each go our separate ways. I have to admit the new Teva ones are much more stylish. Jean Michel is having lunch with a former colleague and I am meeting up with my lovely friend Mary Kay from Out and About in Paris who is soon to go and live in Prague. I am not the only person who will miss her. 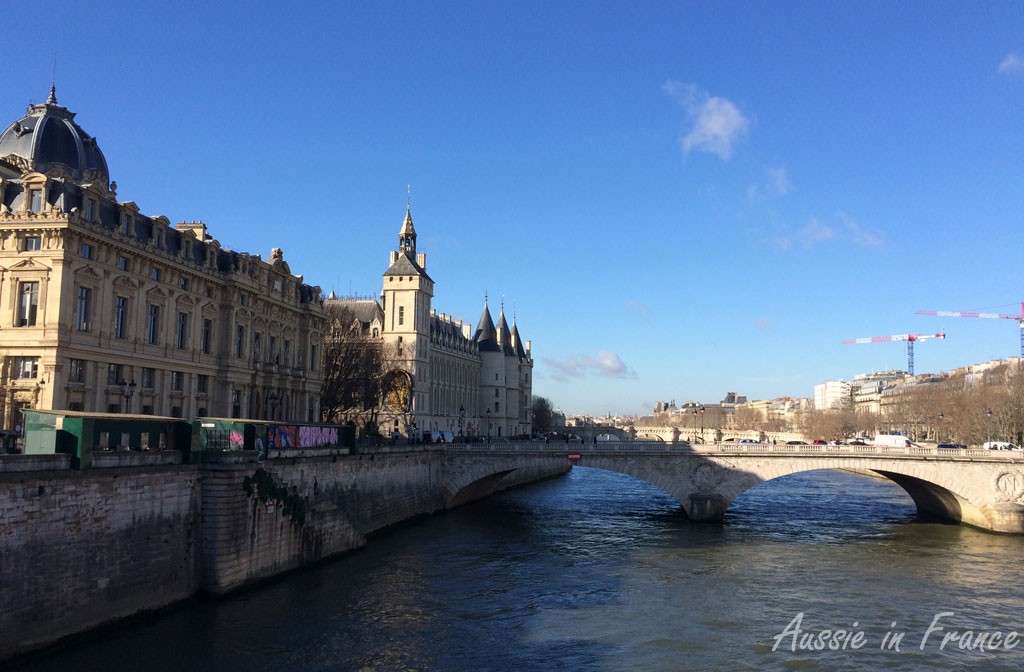 The conciergerie from Notre Dame bridge

As I walk across the Seine to Notre Dame then past the Conciergerie and over the river again to the right bank and my metro at Hôtel de Ville, I can’t stop taking photos, the sky is so clear and sharp. 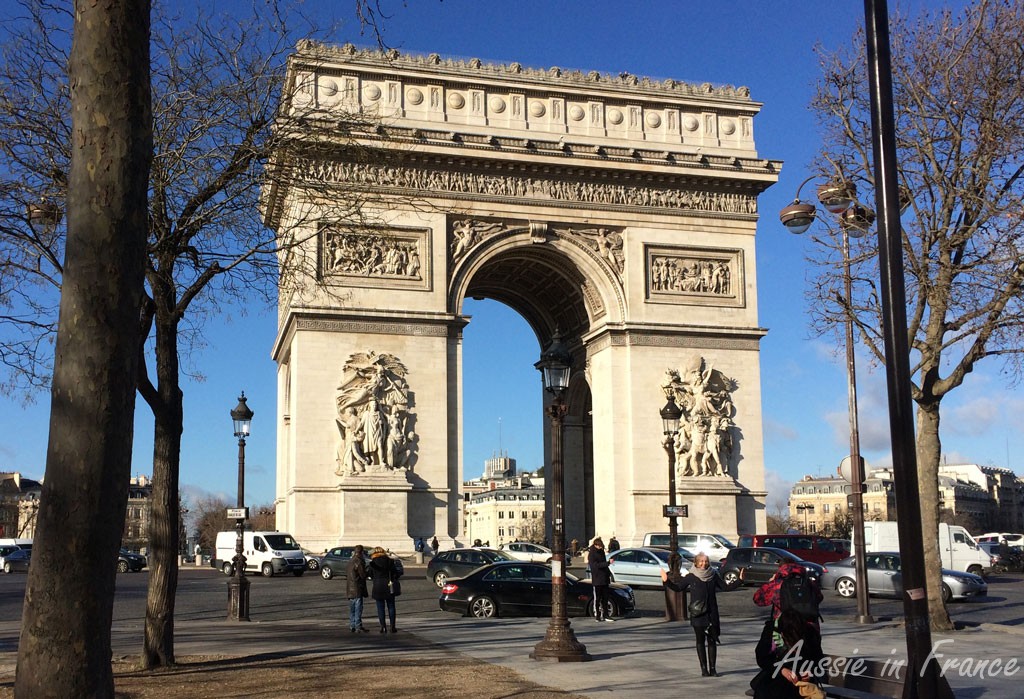 The Arc of Triumph

I emerge at the Arc of Triumph  which is also looking good with so much blue sky around it and head for the 5-star Peninsula Hotel on Avenue Kléber where Mary Kay and I are having lunch in Le Lobby recommended by Janine Marsh in a recent post in her blog, The Good Life magazine, relayed by Susie Kelly on No Damn Blog. 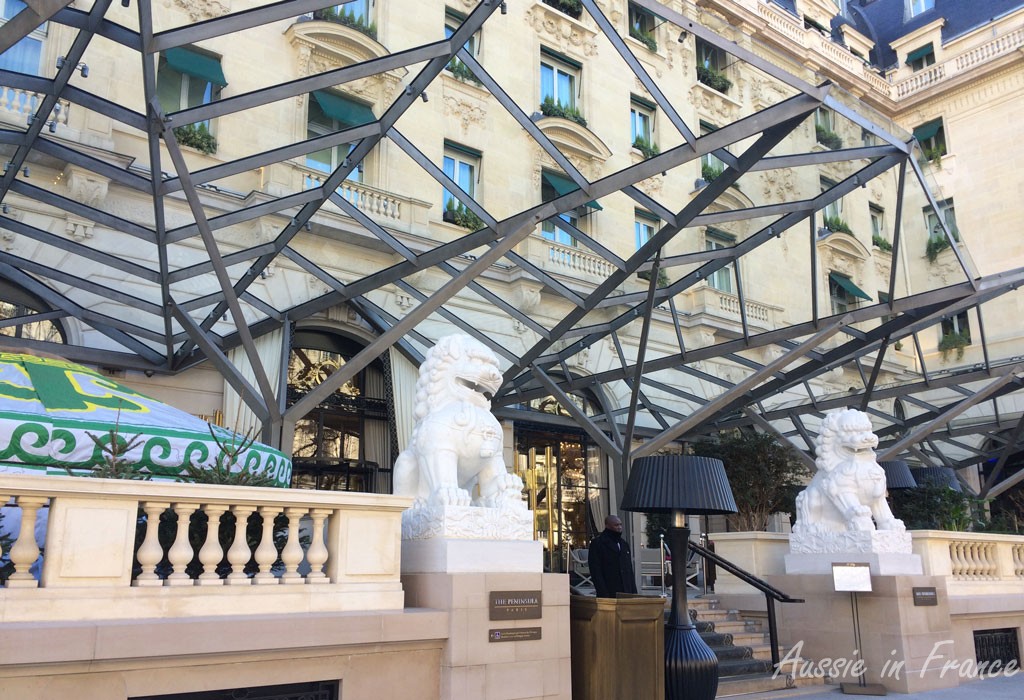 After 5 years of renovation, the lobby of the Peninsula is, indeed, a splendiferous setting. The welcome and service, of course, are impeccable. I can even forget my iPhone on the table while I wash my hands and find it still waiting for me. 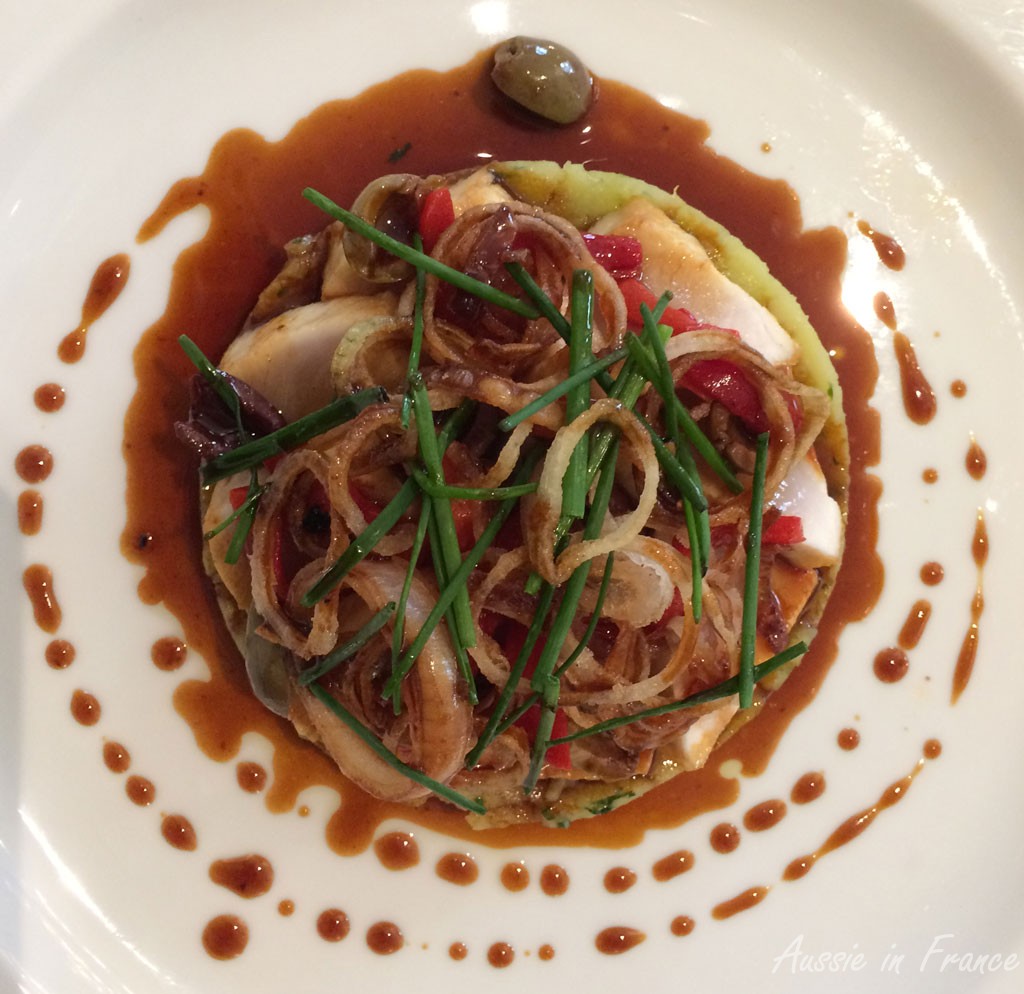 Our sword fish to rhyme with sworn

We choose the 60 euro set meal that includes a glass of wine and bottled water. A very tasty Jerusalem artichoke and foie gras soup is followed by beautifully cooked sword fish (which the waiter pronounces to rhyme with sworn) on a bed of vegetables. We finish with cheesecake on a strawberry crust which is somewhat disappointing especially as I’m not a big fan of France’s favourite fruit. 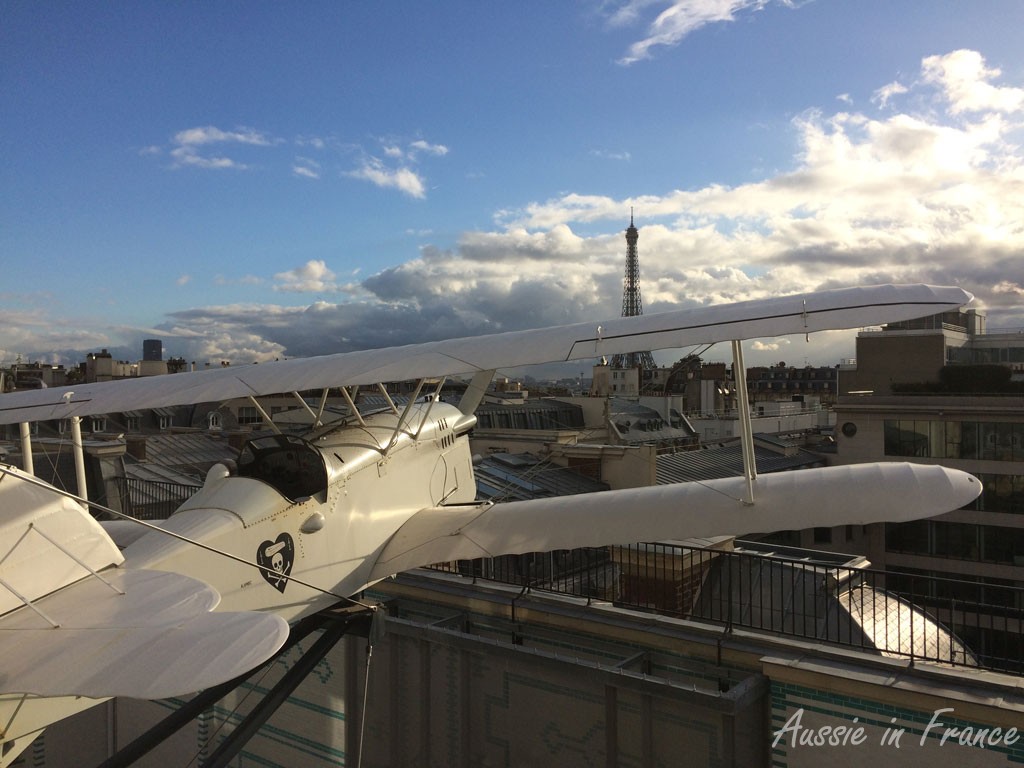 The Oiseau Bleu biplane on top of the Peninsula

Mary Kay, who has been to the L’Oiseau Bleu restaurant and bar several times then takes me up to the roof of the building. The view of the rooftops of Paris with Sacré Cœur in the distance is stunning. I make a vow to come back here for a drink in the summer. 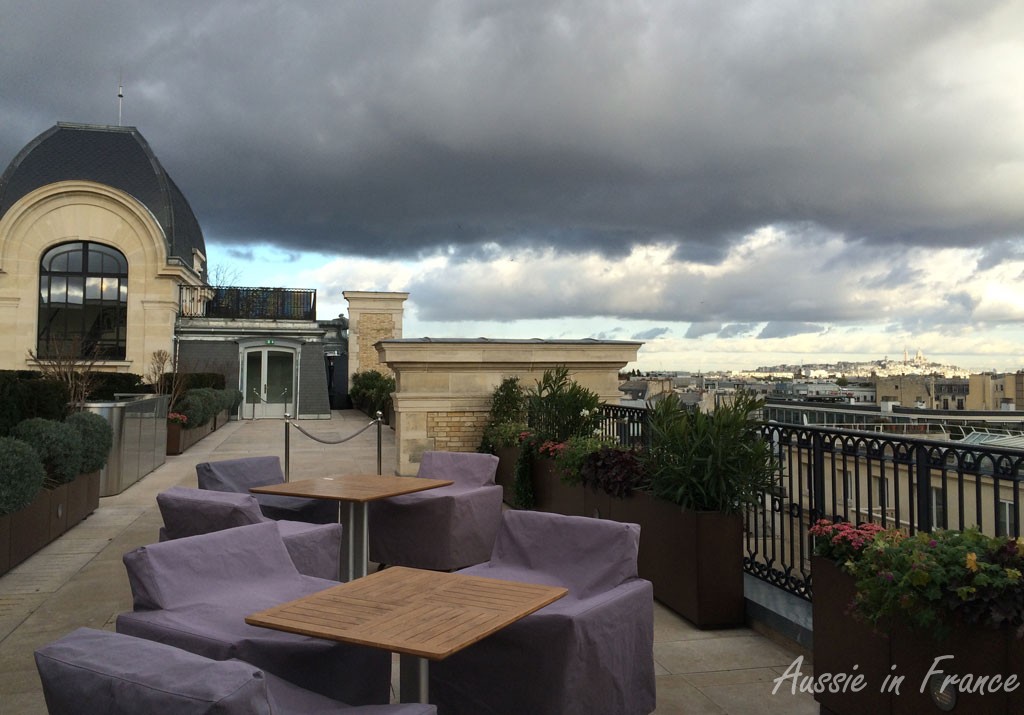 The Oiseau Bleu summer terrace with Sacré Coeur in the background

L’Oiseau Bleu is named after the biplane that disappeared on 8th May 1927 with its two French pilots, Charles Nungesser and François Coli, during the first attempt to fly non-stop across the Atlantic from Paris to New York. Less than two weeks after their disappearance, Charles Lindbergh was the first to make the crossing, but in the other direction, on board the Spirit of St Louis. No trace of the Blue Bird has ever been found. There is a replica of the plane on the roof. 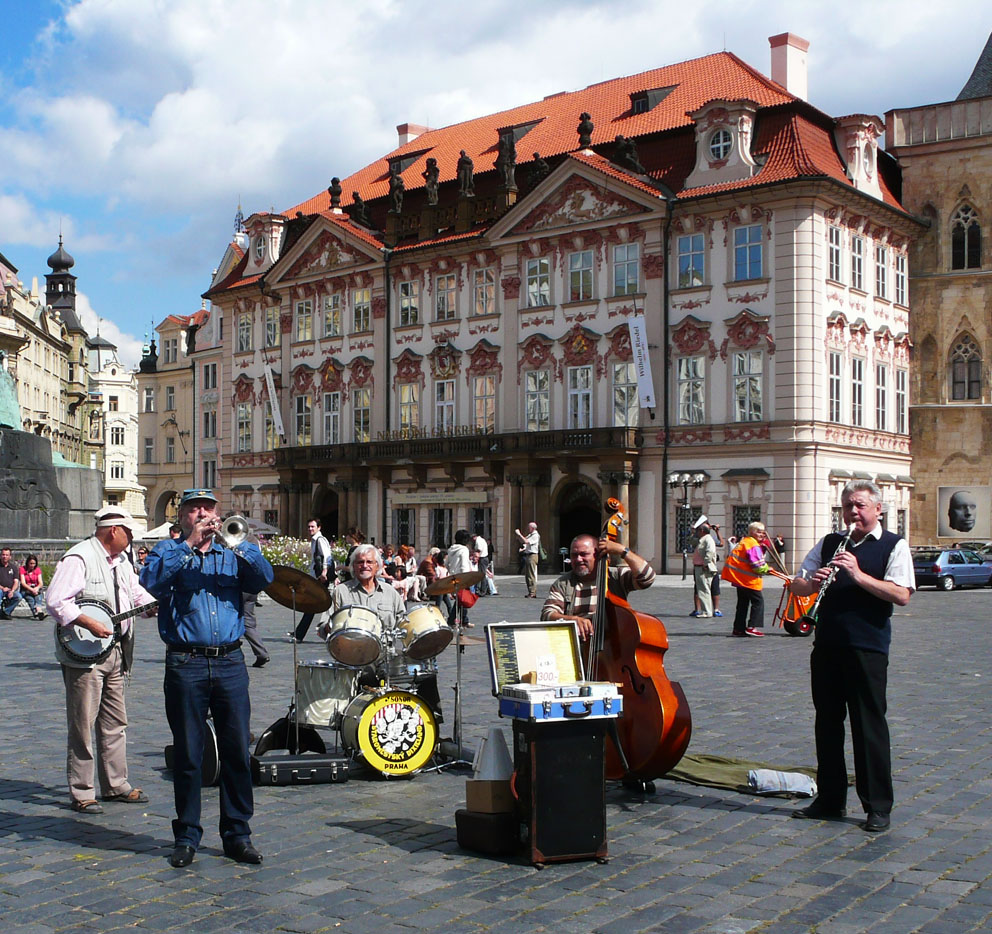 The main square in Prague alive with music

I am sad to leave to leave Mary Kay but hope to see her again before too long, perhaps in Boston or New York now that Leonardo and Black Cat are both living there. Much as I enjoyed the week I spent in Prague several years ago, it isn’t on the agenda again for the moment, but who knows?

This entry was posted in Eastern Europe, Paris, Restaurants and tagged Au Vieux Campeur, l'oiseau bleu, le lobby peninsula hotel, Out and About in Paris. Bookmark the permalink.