We’ve arrived in Delhi, met up with the coordinator, driver and French-speaking guide from Trinetra Tours, checked into our hotel and are about to have lunch. I’m surprised to see that the restaurant is called Lutyens Cocktail Bar, opposite the Meridien Hotel. When we enter the half-filled room, the only people I can see certainly not Indian. There are only tourists here, I say to Summer, our guide for the afternoon. “No, no”, he says, “there are Indians as well”. 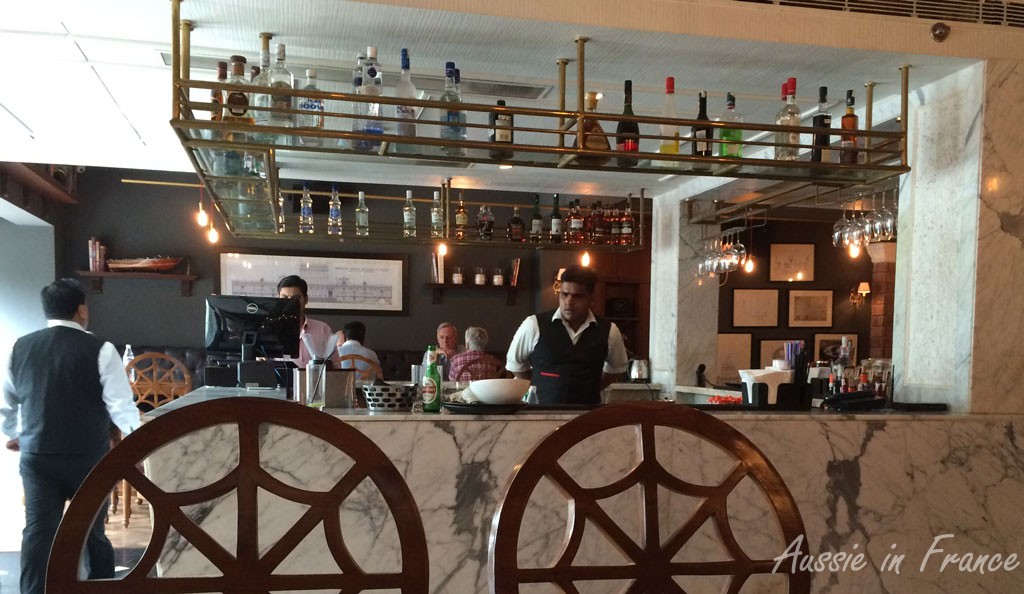 When we visit another country, we like to eat like locals and this does not correspond to what we are looking for but we don’t have much choice. We have decided to become temporary vegetarians in India for two reasons: first there is less chance of having food poisoning and second we are certain of getting vegetables that way. We choose a mixed vegetable dish and naan and hope for the best.

Although a little spicy, the food is good, but not very copious. When the bill comes, we discover that we were only given one serving of each and not two. The total is 1120 rupees (16 euro) – hardly good value for money in Delhi and we could have been anywhere in the world. We later learn that the guide chooses where we eat so it’s best to explain early in the day that we would like a localn, authentic experience. 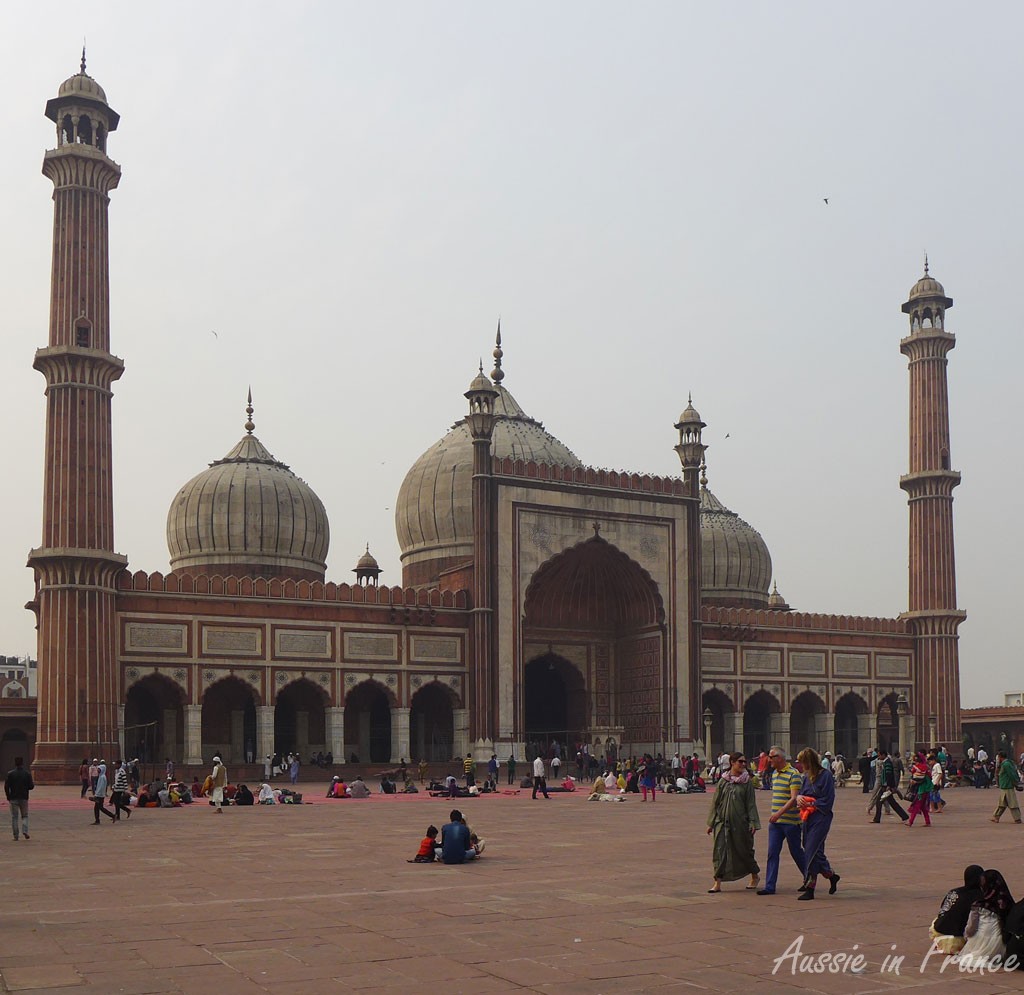 The face of Jama Masjid, the Great Mosque

Our first visit is to the Jama Masjid (The Great Mosque), the largest in India. Summer explains that the entrance to the mosque is free but that we have to pay 400 rupees to use our camera, have our shoes looked after and don suitable attire, which means a wrap-around skirt for Jean Michel (he’s wearing ¾ pants) and a sort of throwover for me (I’m wearing 7/8 pants and a long-sleeved shirt). All the non-Muslim women are given the same garb. 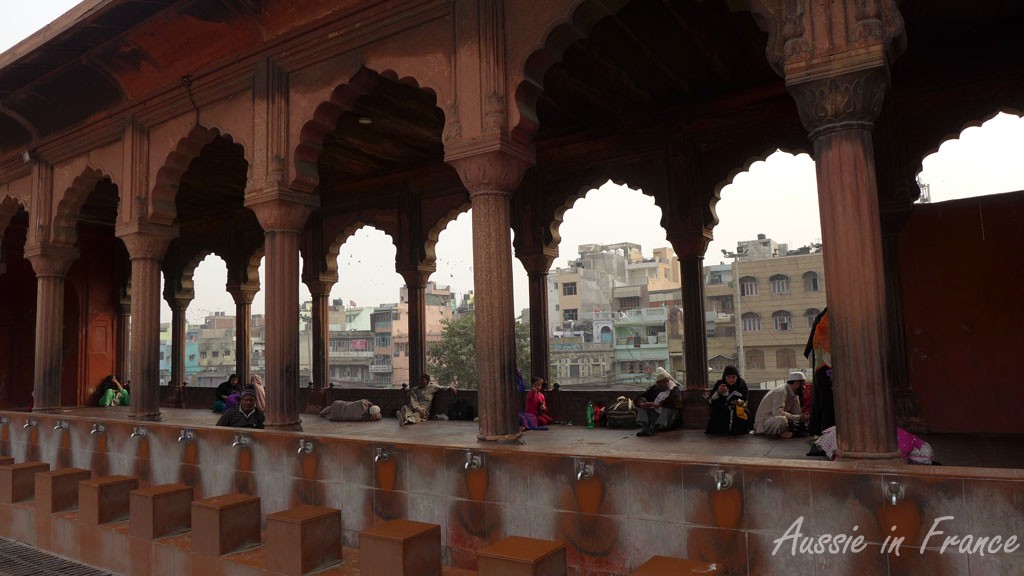 The gallery that runs around the mosque

I realise of course that I should have brought socks or cloth scuffs with me – I’ll remember next time. The ground is not particularly clean and is strewn with litter from sweets and biscuits.  A lot of families come and picnic in the main square and under the galleries enclosing the mosque. It gets busier as time goes on.

View from one side of the mosque

Built in 1650 in the middle of Old Delhi, it can welcome 25,000 people in the enclosed area although the building itself is not very big. The three domes made of white marble striated with black offer a striking contrast with the pink sandstone of the rest of the mosque.

From the galleries there is a sweeping view of Delhi with all its contrasts.

Next on the programme is a rickshaw ride through the main bazaar. We go through a maze of very narrow alleyways and I am continually surprised that the rickshaw doesn’t overturn but our wallah is obviously a champion. The amount of muscle power required to keep us going in some parts is impressive. Also, since we have said we’re not interested in shopping, he doesn’t even get a break. 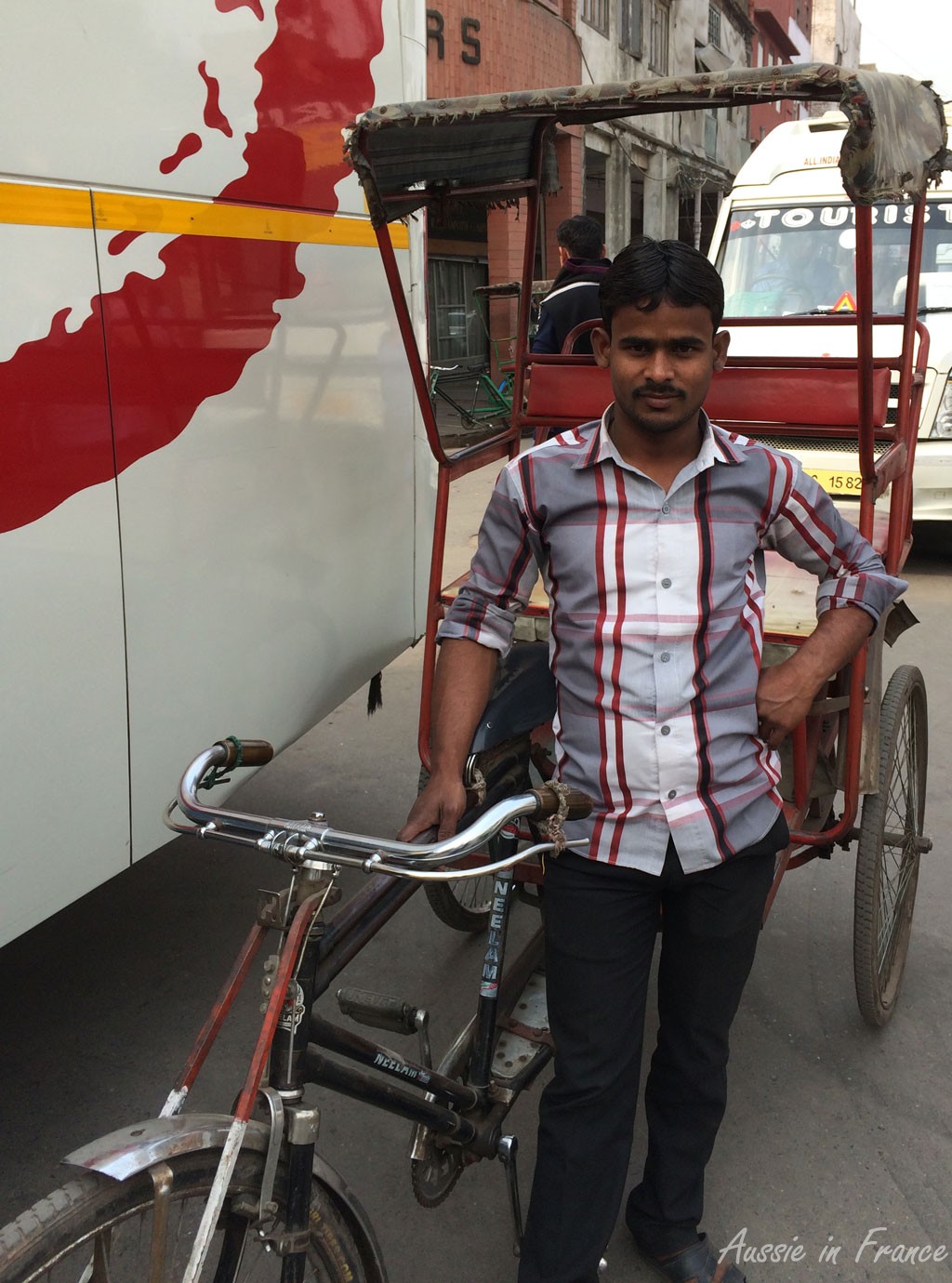 We return to our starting point where Summer is waiting for us. Anand soon arrives and we set off for the last part of our visit – Akshardham Swaminarayan Temple, which we have added to the original itinerary. This amazing Hindu temple displays millennia of tradition Hindu and Indian culture. We can’t take cameras, phones or electronic equipment of any kind so all I can do is to describe my impressions and take a couple of photos of the brochure we received. But I invite you to explore the site more on the official website. 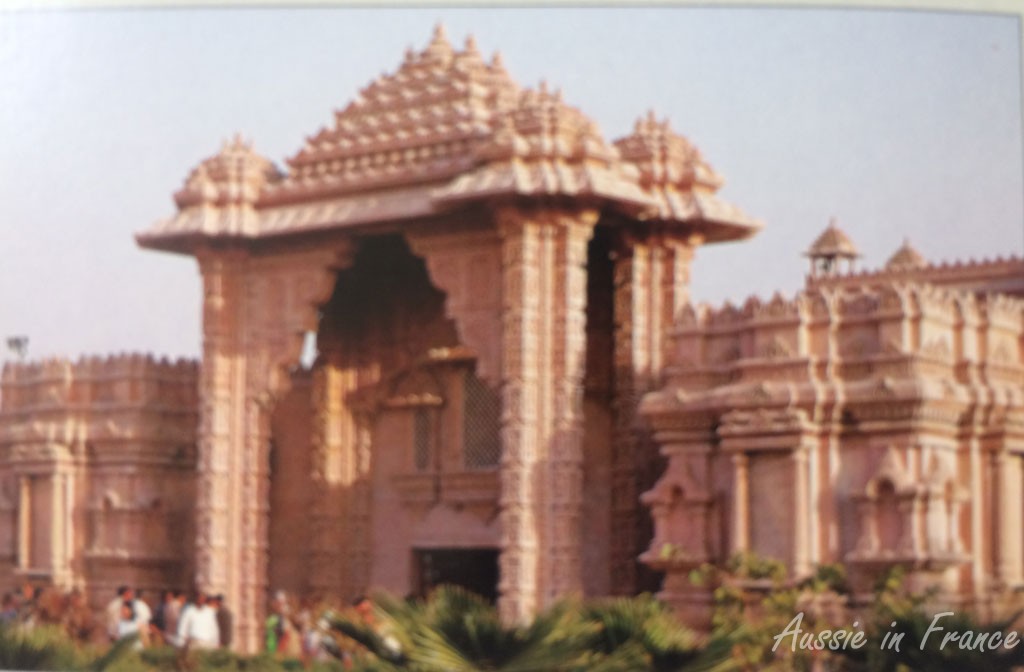 This extraordinary complex covering 40 hectares was opened in 2006. It was inspired and developed by Pramukh Swami Maharaj, the spiritual head of the Bochasanwasi Shri Akshar Purushottam Swaminarayan Sanstha, whose 3,000 volunteers helped 7,000 artisans construct the temple. The first impression is one of serenity.

Summer does not come in as guides are not allowed. He suggests we meet him at the entrance in 45 minutes but we don’t come out for 1 ½ hours!

The elephant frieze (photo from a brochure)

We wander around, visiting the inside of the temple with its intricate carvings and many statues. I am a little surprised that despite its recent construction, it’s very traditional but the workmanship is exceptional.

What I like best, however, is the elephant show, Gajendra Peeth, on which the temple is based. It is 326 metres long and comprises 148 elephants carved out of stone telling various stories with the help of numerous other sculptures of men, animals and birds, paying hommage to the role of elephants and nature in Indian culture. It is most definitely the highlight of our tour. We’ll be visiting the more modern part of Delhi on our way back from Australia in a month’s time.